I like the idea of Indian pizza, and excited to try Preeti Mistry’s version. But I don’t care much for Zante’s in La Lengua— the crust isn’t as good as SF’s best pizza places or naan, the toppings aren’t as good as an entree at Indian places, and the mix of the two isn’t bigger than the sum of its parts. 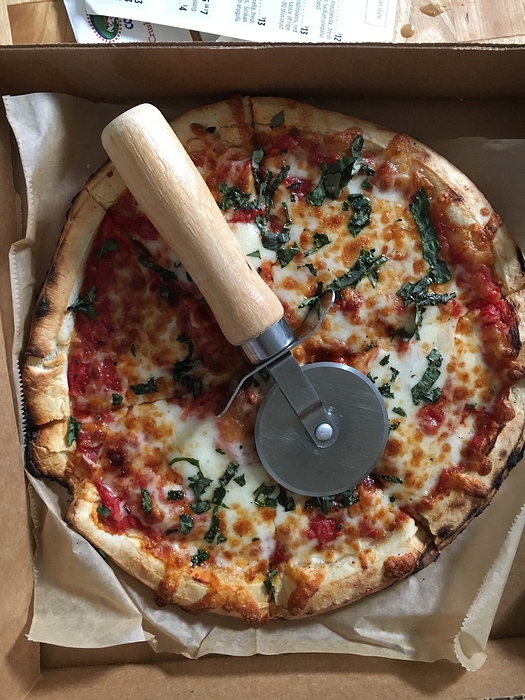 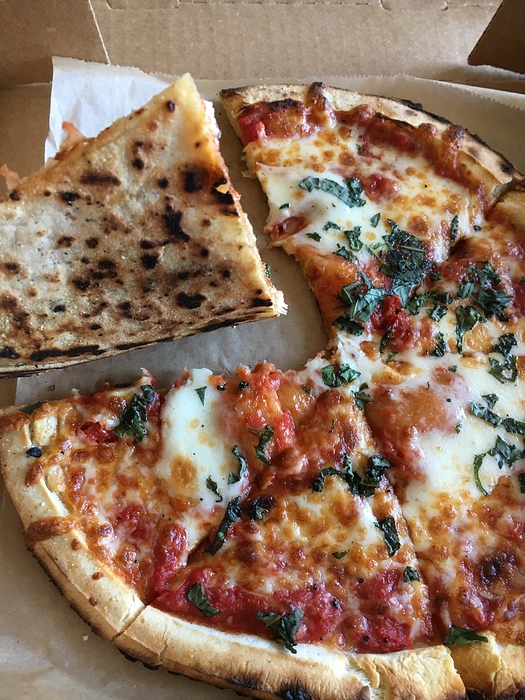 I ordered two last night, a small Pizza slicer added to the photo for perspective. The crust was under cooked, with the cross-section looking a little bit like mochi. It had a weird taste, not a fermentation tang, but something related to the charring or alkalinity

I think Bare Knuckle Pizza in Oakland deserves some recognition on this thread. A few months after eating my first pizza there, I have found that I prefer their pizza over all others in the East Bay, including Pizzaiolo/Boot and Shoe. It’s neapolitan style, with not so much char so I suggest requesting well done if that is your preference. Crust tastes sweet like a sweet baguette and it is thin in the middle, does not travel well so eat in is best.

I had stopped going to Zante years ago when I thought it went downhill. I had to revisit it a few months ago twice, and it was actually really good!

The Zante crust is still kind of like puffy naan, but of all the Indian pizzas I tasted in SF, it rose to the top. I preferred getting it for delivery and crisping the slices in a skillet to give the crust more texture. I’ll also say that it is expensive, with a large pizza coming in near $30.

I also tried Curry Boyzz and Curry Up Now. Curry Boyzz had bigger pieces of chicken, but was like a normal, low quality pizza with some Indian toppings added in addition to the bell peppers and black olives (weird). Zante’s was much more flavorful. We all found ourselves going back for another piece of the Zante’s. I usually request no raw garlic b/c it came through way too strong, and get extra chicken and/or eggplant on the Zante’s.

Curry Up Now has good flavors, but their Indian pizza is basically a piece of naan with salad greens and chicken tikka masala on it. It’s not really Indian pizza.

I also found this article to be really interesting: https://munchies.vice.com/en_us/article/meet-the-godfather-of-indian-pizza 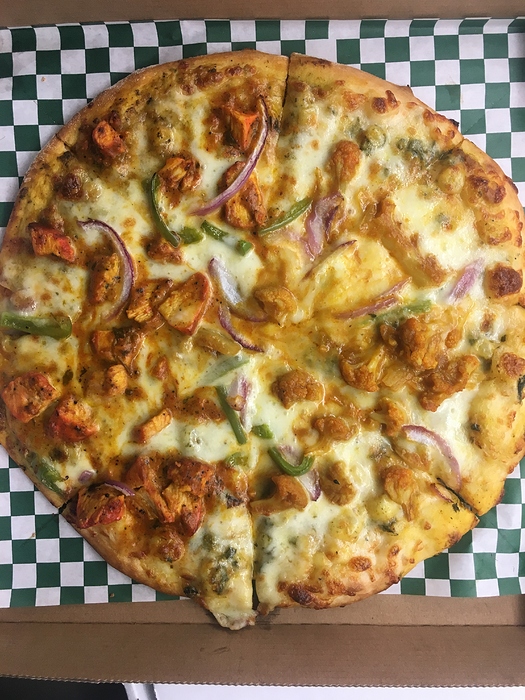 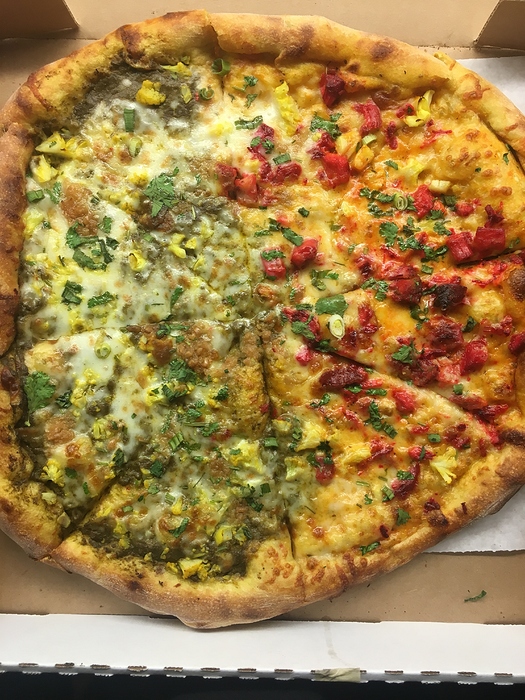 Of the four I liked the simple margherita and the centocelle the best. The maranella was also good. Did not care that much for the torpignattara - the crushed potatoes had the consistency of mashed potatoes on top of the pizza which didn’t really work for me. Also I don’t think I’m a fan of string beans on pizza/pinsa. 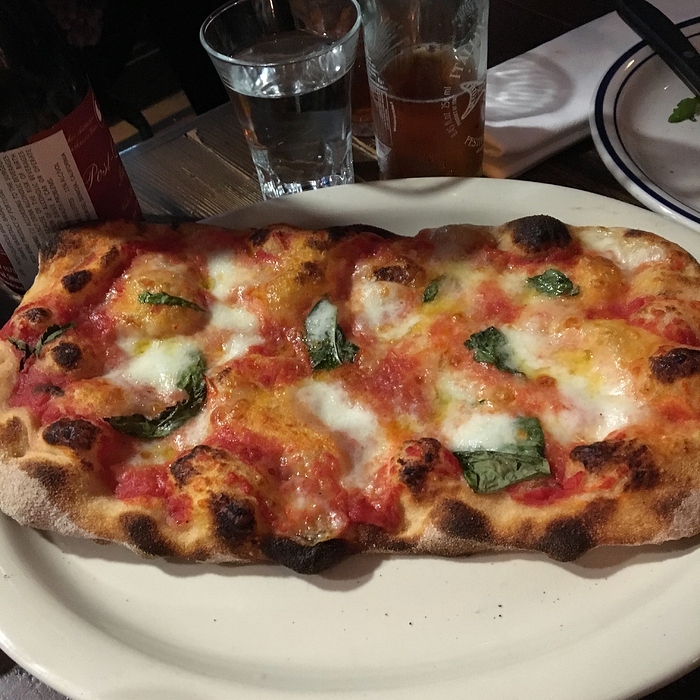 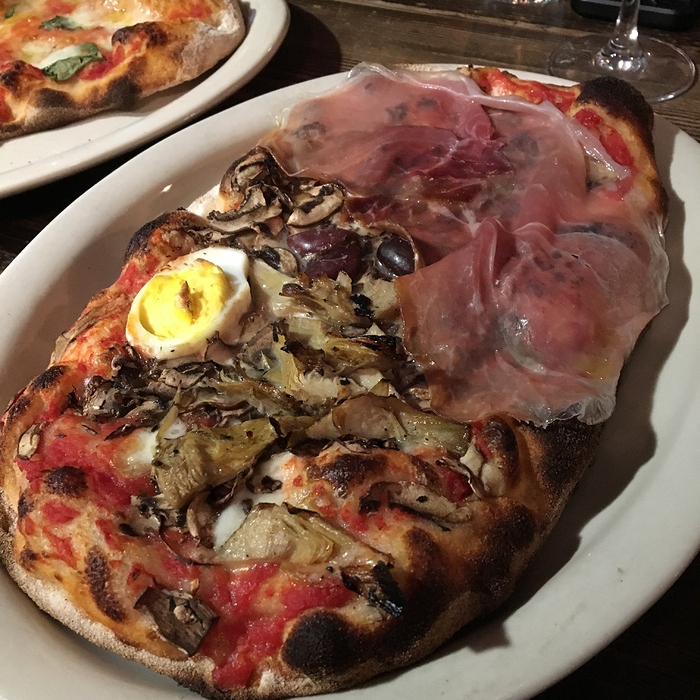 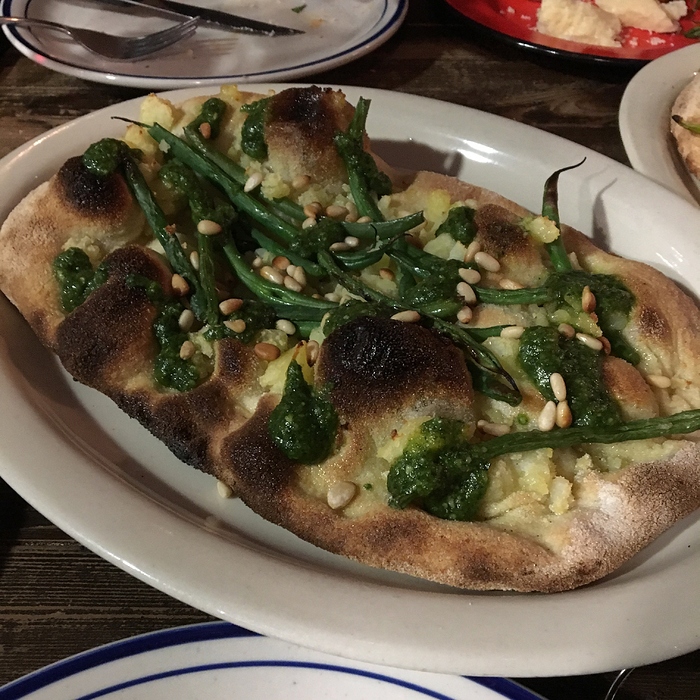 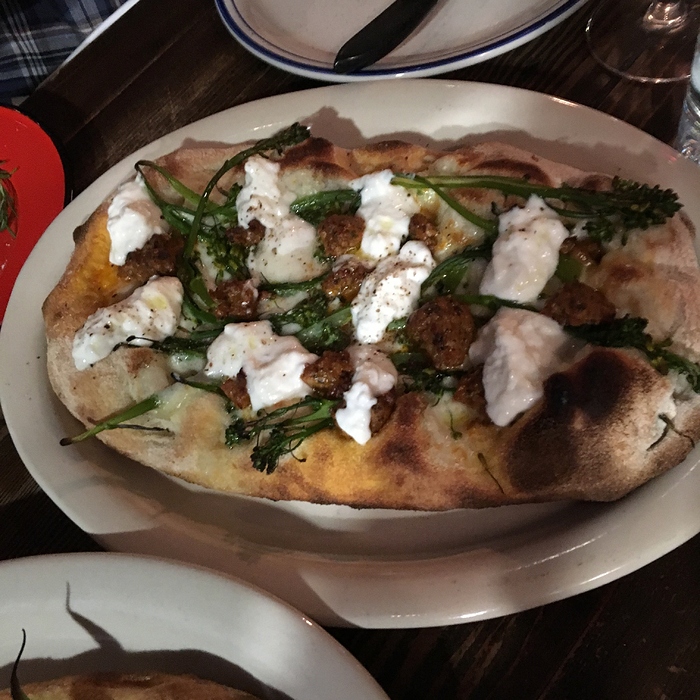 You think that’s what the rice flour and soy do to the crust? Like the banh mi baguette airy effect?

Maybe? The crust crumb had a little of that slightly dry airy texture that some banh mi rolls have.

Main Street Pizza recently opened in an odd location, on the same block as Zachary’s on Solano in Berkeley, with a Mountain Mike a block away. I was reluctant to try it because their online menu had slices going for $5.00, but two slices came to $6.50 today. Unfortunately, the slices were dry, without much sauce and indifferent cheese. They appear to be courting the sports-bar crowd with three big-screen TVs and craft beers.

islice at the bottom of Solano is cheap enough, but the crust is too doughy for me. Little Star is my favorite pizza in the immediate area, but I still miss the takeout-only Lanesplitter.

I’m surprised I’ve never heard of islice, but it seems to be in the same block as Suzette creperie, which I also wasn’t aware of until last year. (I’ll use this opportunity to shout-out Suzette, excellent crepes at very decent prices).

Ardiana: New place by the Gialina/Ragazza folks in Noe. Similar menu to Gialina but the apps specialize in dips accompanied by a fresh baked pita and a couple of larger entrees. All the dips we had were excellent (avocado, carrot hummus and roasted cauliflower) as were the delicate pitas. We had the New York (red sauce, mozzerella, pecorino and parm) – good; and Heirloom tomato, smoked bacon, mozzarella and arugula – excellent, the fresh in-season tomatoes and bacon make an excellent combination. I thought the crust was better than Gialina which I find inconsistent, especially if the owner isn’t on the premises.

Long Bridge Pizza Co., Dogpatch: tried them when they first opened and thought the crust and toppings were kind of flavorless. Ended up there a month ago and had the same impression, so would not hurry back.

Pizza Hacker: This is my favorite as of late, especially the Yo Vinny with pickled goat horn peppers, sausage and onions. Their crust has a sourdough tang and nice chew, red sauce has a nice zing and they put a little salt on the crust before baking.

Blue Line: Offshoot of Little Star (or ex-partner opened them or some such thing), Westlake Shopping center. I like the Mediterranean deep dish, but the ingredients don’t taste the same quality as Little Star (actually Little Star’s ingredients don’t seem the same quality as they used to be either). Surprisingly decent beer selection and $2 off at happy hour, so I usually order take out and have a couple beers while waiting.

I did stop by iSlice today. It turns out they opened just three weeks ago.

Much, much better than Main Street. Not dry, with a decent amount of sauce and a good cheese balance. The crust was, in fact, a little doughy/undercooked. I mentioned this to the owner/pizzaiolo, and he said that they were still getting used to the oven. He said that for slices they bake the pies to something like 80% completion, so that they can fully cook when reheated, so that might also be an issue.

This place is going to be very popular with Albany High School students, like that banh mi shop a few blocks east.

Yeah, I thought the sauce was decent. We bought a small pepperoni on Friday and it was okay, but under-cooked. Really fast though. Ready in less than 10 minutes. I’d try them again in the future. I’ve been meaning to try Main Street, too, but maybe I’ll skip it.

Undercooked crust was a problem at Nizza La Bella, too. Asking them to cook it a little longer did the trick.

As I recall, Nizza La Bella wanted to properly cook their pizzas, but patrons thought them “burnt”. They were happy when someone asked for a proper amount of oven exposure!

Sounds like a dumb question, but does Suzette creperie make Crêpes Suzette? I ask this question as a person of some authority on the subject; my last job in the restaurant industry was as attendant to the flaming dessert wagons at Stouffers’ Top of the Sixes in New York back in 1962. The restaurant was on the top floor of 666 Fifth Avenue, now known as Jared Kushner’s white elephant.

I got a busboy’s wages, plus all the sips of Grand Marnier I could sneak.

Nope, no flambes at Suzette. But my parents took us to Top of the Sixes for my 10th birthday. I remember Shirley Temples and a filet mignon that was served on a piece of toast for some reason. This would have been 1966.

Husband insisted we try Main Street Pizza. I would never eat in a place with 4 huge TVs, but we got takeout slices. We asked for/paid for 3 and they gave us 4. A lot of pizza for $11 (plus $1 tip). The Calabrian was pretty good. The peppers and sausage were spicy and there wasn’t too much cheese. However, I thought the pepperoni slice was awful, with way too much tasteless, greasy cheese. I couldn’t even taste the sauce. Didn’t like the crust. See no reason to go back.

It does seem to be catering to students. In that case, I think it should be closer to the campus. I suspect they misjudged the neighborhood, especially now that the movie theater’s closed. It was pretty empty for a Friday.

While we waited we looked at all the beer. I asked the guy working there if he’d tried the quinoa. He said he’d tried almost all of the 200+, but not that one.

I must disagree with the Crepe Suzette/Solano as far as 2 data points will let me.

I think it is firmly in the “cheap and serviceable” category, rather than being “excellent” … Breton Crepe or whatever it is called on University below SP is quite good but twice as expensive].

The savory crepe I had was ok, but the Crepe Suz was a mess … cheap ice cream and drowning in something. Not sure if it was real GM. Drowning really is not an exaggeration here. I’m not mad about it because it was like $6, but that really was about what it was worth.

I used to like the Crepe Suzettes at Le Zinc and would be interested in another place which kicks them out reliably.