Vegetarian Meal Plan: What to Cook This Weekend and Beyond

After I had a baby, and several hours of each day suddenly evaporated, I started to admire friends who had a system in place for meals—they'd cook big on Sunday so there'd be plenty of leftovers throughout the week. I learned that when you're busy...

Thanks for posting this! Looks like a very practical plan with recipes that won’t take too long during the week.
And now i want ful medammas for breakfast!

He lost me with toast and black beans.

I find articles like this interesting, but I always notice how much dairy is in the food. After years of eating vegan, dairy still jumps out at me in recipes, especially in pasta and grain dishes.

It’s a thoughtful mean plan, though. Lots of interesting cuisines are represented.

I’m not vegetarian, but this give me ideas for some dishes, thanks.

This breakfast dish can help me use up the sumac and pines nuts: 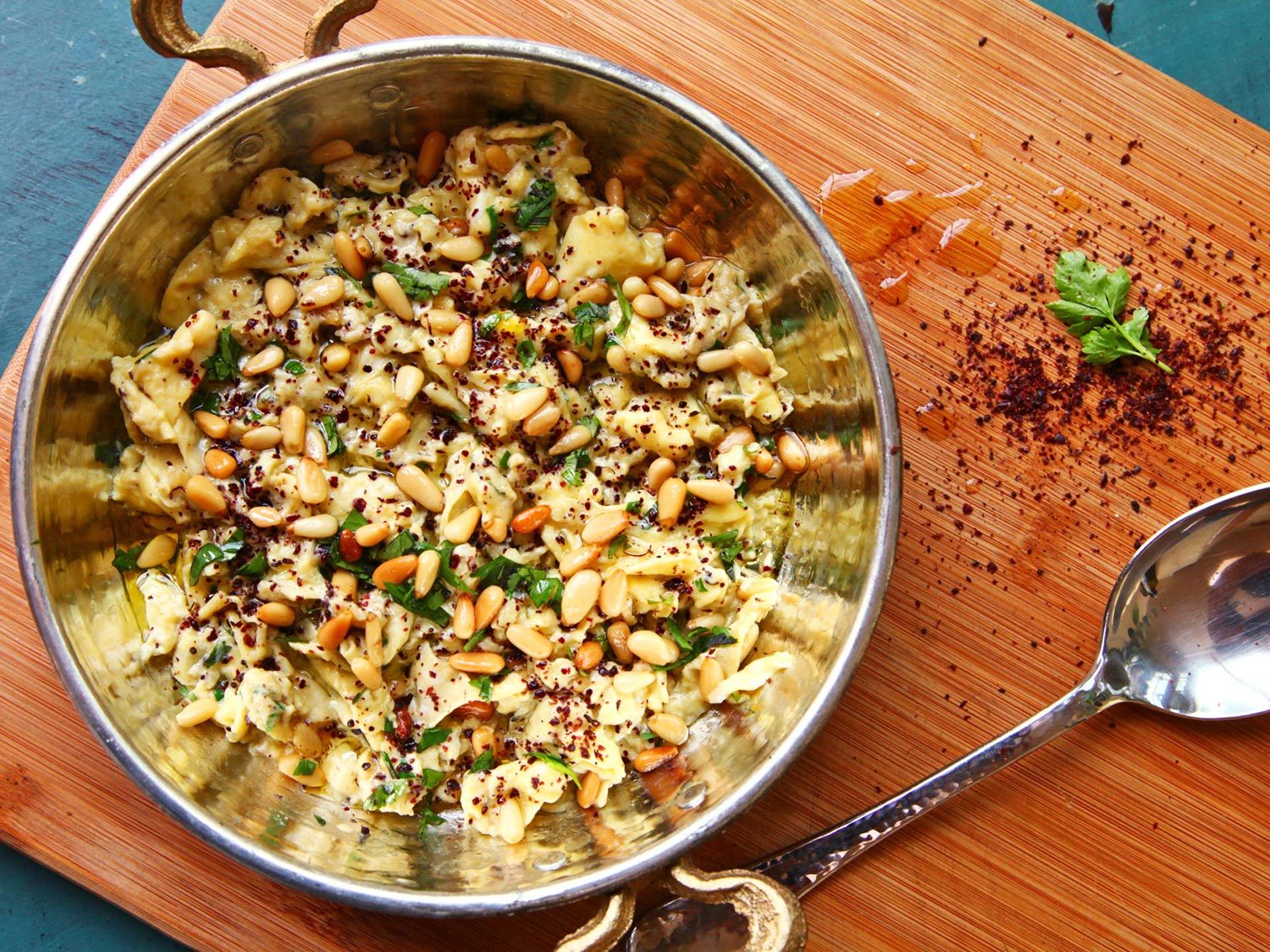 I find articles like this interesting, but I always notice how much dairy is in the food. After years of eating vegan, dairy still jumps out at me in recipes, especially in pasta and grain dishes.

I’ve been cooking vegan for a few months, and since I’m an omnivore when I eat out, haven’t found a vegan cookbook that suits my needs-- for example, I have no interest in vegan approximations of meat/dairy recipes and the better Indian recipes take forever to make. But Serious Eats has been a treasure trove. Some of their recipes that I like so far (anything with butter I’ve substituted coconut or olive oil):

Less success with these:

That’s an awesome list! You made all that? I’m impressed. I made smashed cucumbers and they were great, they’re in regular rotation during cucumber season.

When I was eating vegan, I just left the meat and dairy out when cooking, messed around with proportions and seasonings. I never got into nut butters and protein substitutes and food like that. Asian and Italian food is pretty easy to make vegan.

Kenji is so great when he is eating vegan for a month. So funny that he does it in February.

Serious eats has some fantastic vegan recipes! Those smashed cucumbers were a food group for me this summer, i often add in some edamame or smoked tofu and just call it a meal.
And the olive miso condiment is really brilliant
This chickpea salad is one of my favorites 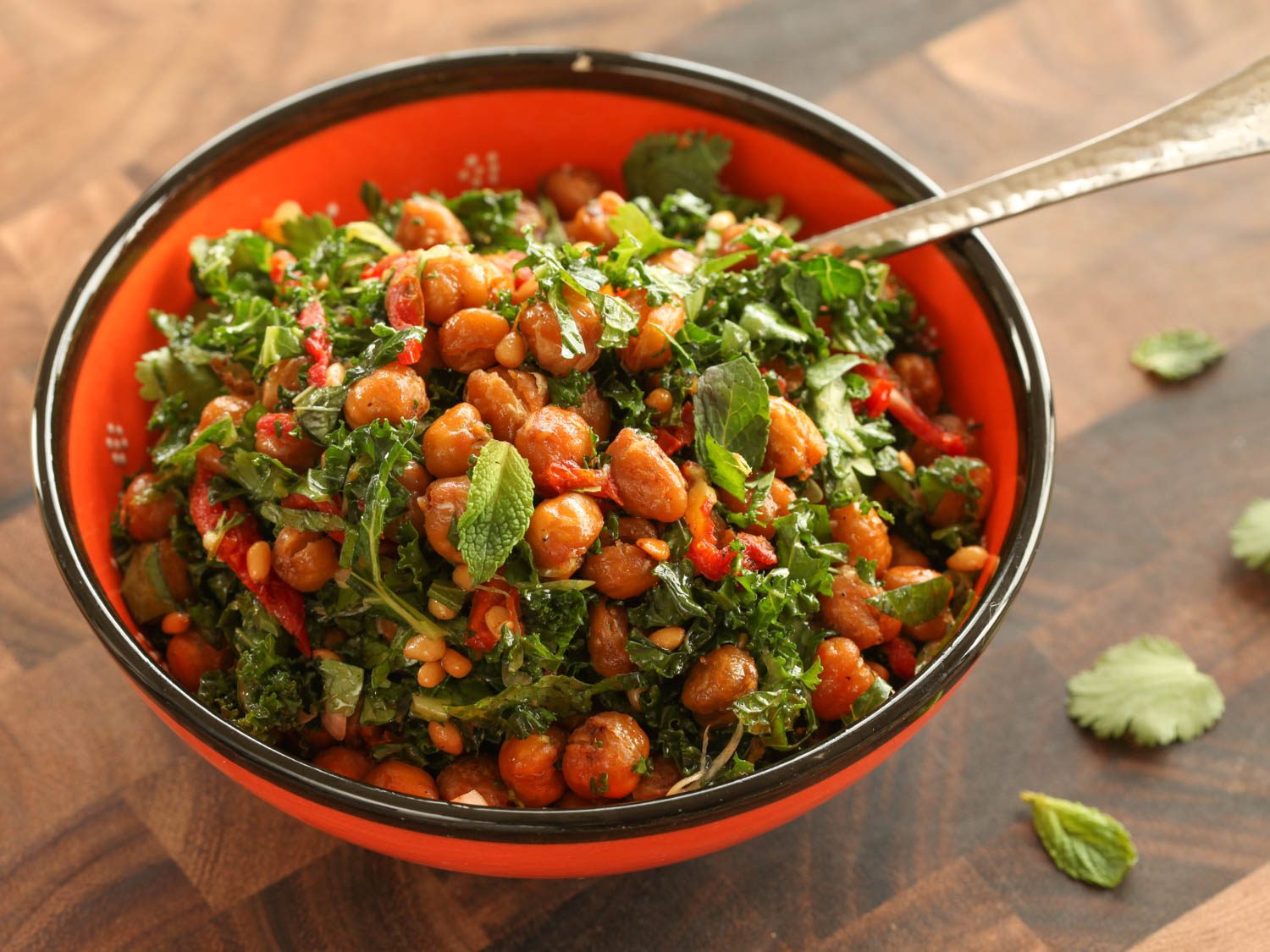 A hearty salad of chickpeas roasted with cumin and paprika until dense and nutty, combined with kale, fresh herbs, pine nuts, and sun-dried tomatoes. This is a salad that gets even better on the second day.

Food52 has some great vegan recipes too. I’m not much of a cookbook person but i find great recipes on post punk kitchen, thug kitchen, oh she glows, and i often just modify ottolenghi recipes as needed

When I was eating vegan, I just left the meat and dairy out when cooking, messed around with proportions and seasonings.

Wow, that’s a lot bolder than I am! I tend only to modify a recipe the second time around, and haven’t been trying new ones that have dairy or meat in them. For example, even though I know from experience that some of his recipes have unnecessary and time consuming flourishes, my Ottolenghi books are collecting dust right now because I can’t bring myself to tweak what read like perfectly balanced recipes. His recipes also tend to have lots of sweetener or dairy.

What are your vegan go-to dishes?

I never got into nut butters and protein substitutes and food like that. Asian and Italian food is pretty easy to make vegan.

That’s very true! I’ve been using Eatyourbooks to identify the recipes in my bookcase that happen to be vegan, and lots of recipes from my Italian and Asian cookbooks come up. I cook from Fuchsia Dunlop’s Every Grain of Rice frequently, in particular the section on leafy greens and cold appetizers.

Kenji is so great when he is eating vegan for a month. So funny that he does it in February.

In addition to being tasty, I recently found out a little factoid that might explain why Kenji’s vegan recipes work so well for me— I have allergies that make it difficult to eat common vegan ingredients (certain raw foods and soy milk). Apparently Kenji has the same allergies, so he seems to avoid using those ingredients in his cooking.

I wonder if it’s because the type of produce available in February tends to be the kind of stuff that’s available all year long, and that means the recipes are easy to make any time of the year. Plus, summer is about BBQs and BLTs, fall has all the meaty holidays, and spring veggies go oh so well with butter and salty cheese.

What are your vegan go-to dishes?

Really, I ate thing whatever fruits/vegetables were in season, with some whole grains thrown in.

When cooking real recipes, I simply left out meat and dairy. For example, seaweed hondashi and miso for miso soup. Or chicken paprikas stew with carrots and potatoes instead of chicken. Mushroom, squash or potato tacos. I’ve even made beef bourgiogne without the beef, just added more onions and mushrooms. Flour slurry instead of roux works for most gravies/sauces.

Or here is a perfect example of a recipe that I have made without meat, this Persian recipe for a stew I love (Chowhound’s COTM is doing My Persian Kitchen this month, which made me think of this). 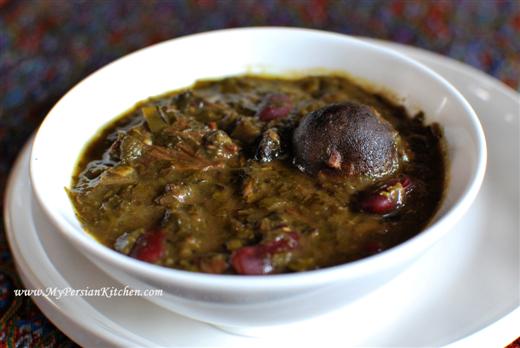 Today is The Sous Chef’s birthday.  Yap, he is a Taurus and Gemini cusp baby and represents both signs rather well! Since today is his birthday, I am ... Read More

I just left out the meat.

I cooked several vegan recipes from Serious Eats during the fall. I’m excited to see what Kenji posts in February, and to hear if others have recommendations for SeriousEats recipes!

I’m not sure if it’s universal for the site, but Kenji’s cooking times seem to exclude prep-time and thus can take way longer than listed.

Very good
My memory escapes me on a few of these, but I rated them highly after I made them.