Grand Opening sign out. Lunch buffet 7 days a week, but no mention of a price anywhere.

I stopped by and saw the menu in the window, prices looked pretty reasonable. Also viewable online at http://www.sawannj.com.

And, it may be of interest to some… they have a vegan section of the menu with a lot of choices.

While I love Indian buffets, there are two downsides: Various gastrointestinal side effects, and an overwhelming desire to take a nap afterwards. Hence, I don’t partake often.

Any addition down here in Monmouth would be welcome, it is a schlepp up to Oak Tree Road. I will look forward to your report MM.

There is also a new place called Haldi Chowk in the Shoprite Plaza in Middletown that I have been meaning to check out:

$ 16.95 for a whole Tandoor chicken, and they also have goat. So far it has pretty good reviews on Google, and it looks like they have a lunch buffet, so I will definitely have to check this out.

So I stopped by Haldi Chowk today and met Deepak who is front of the house.

It looks like a nice, clean little family run place,. Closed Mondays, othw weekday lunch buffet is $ 10.95. They’ve been open about a month.

I’m going to try to do lunch there next week.

@marlboroman, Is Sawan in the large space formerly occupied by Masala Kitchen?

I detest buffets of any kind. We will try the regular menu. I’m especially interested to see how Sawan compares to nearby Indian Grill, which we like, with regard to food and atmospherics.

I detest buffets of any kind.

Yeah, my wife does too. But I find they are any easy way to give a number of different dishes a try on a first pass.

And if the buffet is good, then it’s worth a return visit in the evening.

Ooooh I like this thread! One of the things I’m hoping to do as we get in to the fall is do some more exploring outside of my immediate area (AP) and a good Indian lunch buffet would def get me to take a ride–esp if there’s goat!

There is goat. In fact, they have 4 separate goat dishes on the menu.

Roz - Planet Fitness took over where Masala Kitchen used to be. Sawan is in the upper portion of the Plaza in what used to be Bagel Time, which was empty for at least 3 years. 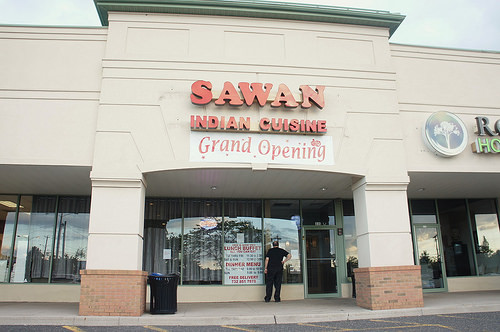 We had dinner at Sawan last Wednesday (9/7). Arriving at around 6:30 p.m., we found the very attractive dining room empty. Didn’t bother us in the least. The very amiable owner seated us in one of the booths along the right side (from which this shot was taken). 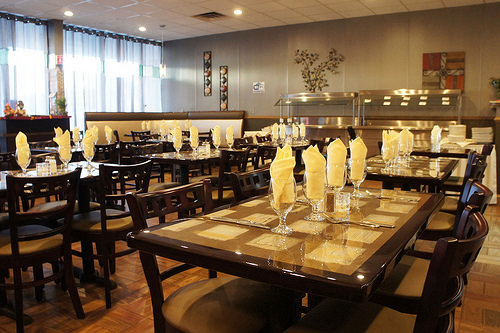 Not long after we arrived, a party of three came in and was seated at another booth followed shortly thereafter by a large group (8 people I think) who occupied the one large semi-circular booth (you can see it in the photo). All these other diners were Indian.

When Mr. RBI and I go to a “regular” Indian restaurant for the first time, that is, those that have large menus with all the usual suspects, we order dishes we are familiar with in order to judge the quality in comparison to other Indian restaurants of that type. (Upscale Indian restaurants with creative menus are a whole other matter.)

I prefer my Indian food spice level at mild while Mr. RBI prefers his quite spicy. So, when the owner took our order, we discussed this conundrum. He said they’d prepare the dishes mild and provide Mr. RBI with a spicy mixture on the side that he could add to his liking.

As is usual in these Indian restaurants, we were brought a basket of papadum along with three dipping sauces: tamarind, onion, and mint. I only tasted the tamarind which was fine. Mr. RBI said the other two sauces were quite spicy which, of course, he liked.

We started with vegetarian samosas stuffed with potato and peas. They were exemplary. The crispy crust was perfectly fried with not a hint of grease. The potato and peas stuffing was mildly spicy and very tasty.

We chose three main course dishes: Chicken Tikka Masala, Lamb Rogan Josh, and the vegetarian Alu Gohbi (cauliflower & potatoes). All were delicious with just the right level of spice for me. They came with a generous portion of Basmati rice. We also ordered onion kulcha. It was crisp more than puffy, and the onion flavor wasn’t particularly detectible.

We took home enough leftovers to make another dinner. When they wrapped the leftovers, they gave us a boatload of rice, way more than we’d left over. A nice gesture.

Service by the owner and one other man was friendly and attentive.

Comparing Sawan to Indian Grill, in Manalapan, Mr. RBI agreed that while the food a Indian Grill is good, Sawan’s is even better. Plus, the atmospherics at Sawan are far and away superior. And as close as Indian Grill is from our house, Sawan is even closer!

I think you can tell that we’ll definitely be back!

Nice review RGR. We don’t have that many Indian food choices on our side of the county and thankfully, Tandoor E India is more than acceptable for an occasional takeout or delivery order. I will definitely make a mental note of this restaurant for those times when we are in your neck of the woods. As usual, thank you for the excellent photos. The nice dining room really stands out.

Yeah, my wife does too. But I find they are any easy way to give a number of different dishes a try on a first pass.

And if the buffet is good, then it’s worth a return visit in the evening.

I am not from the area. Two of my preferred Indian restaurants put out good food in the evening. But their buffet are meh. The same dishes taste very different between buffet and dinner. Probably its the B team cooking the buffet or that cooking at volume (buffet) sacrifices some of the technique.

Thanks for the compliments, B.! If you do come to our neck of the woods and are going to Sawan, perhaps we could join you if we’re around? Just give me a shout.

That would be great. We haven’t seen you both in so long.

I live about a mile away…let me know as well!

P.S. I ate at the buffet about 2 weeks ago but haven’t had the chance to report yet.

I tried the lunch buffet last Saturday. It was $11.95 and they include a beverage with it (one of the choice is Mango Lassi which my kids enjoyed).
The food was good and the service was very friendly. I enjoyed it. The variety at the buffet is on par with the other Indian buffet i tried.

We were there around noon and was the only table there. However, around 12:30-12:45 people start trickling in and the dining room is about half full. Definitely a good sign.

This is definitely a good addition to the area since it is not Italian and is not a chain.

Hope it does well.

My friends went to Sawan Indian Restaurant last week and was very disappointed with the quality of food. The Nans tasted like they were frozen and heated up and food was very very spicy.

Well, that will get some of us there in a New York minute!

I’ve learned from many experiences in Indian restaurants to discuss the spice level with whoever takes the order because the default level tends to be high. So, as I said in my review, because I don’t like extremely spicy but also don’t want the food to be totally devoid of spiciness, when Sawan’s owner took our order, I asked asked about adjusting the spice level to low. They were very accommodating, and the kitchen did a perfect job.

Am I the only one who asks for extra chilis when going to an Indian restaurant?