Copenhagen Crown Bakery and Deli is located in the same mall in Santa Clara as the newly opened Tay Ho. We decided to check it out after our meal at Tay Ho. Both the exterior and interior were, let’s just say, rather dated. That, along with a deserted store, a somewhat indifferent Asian lady who worked there, made us wonder whether it was worth it to give it a try. Especially we wondered whether the shop is Danish by name only, a la Paris Baguette.

Later we found out the former owner was a Danish fellow. The business was sold to the current Korean owners about 10 years ago along with its recipes. The place apparently does a good business with wedding cakes, etc.

But we did give it a try and grabbed a few items to go. We got, chocolate/ custard eclair, apricot thumbprint cookie, raspberry thumbprint cookie, mocha puff. My wife told me later she would have suggested that we left, had I not already started to point and get stuff. Admittedly we had low expectations because of the various factors and thought the quality would be comparable to Paris Baguette and 85C. I tried them about an hour after getting home. I consumed it alone in the driveway while waiting for the kid to wake up, and when my wife later came to the car, here’s how the conversation went:

Me: Eh, about the pastries…
She: How are they? Bad?
Me: They are actually, eh, pretty good… You should try them…
She: Really?!

Observation 1: they are very restrained in their use of sugar. And its sugar that they used because there is no lingering unplesant fructosy aftertaste. (For example, one would get an HFCS aftertaste from American Cola versus Mexican Cola) They are not filling, as they are not packed with sugar and cream. No bloated feeling at all afterwards.

Observation 2: Their pastry are very clean tasting, seemingly without a bunch of weird additives that are common in Asian bakeries. The ingredients taste ‘real’- butter, etc.

Observation 3: These are not best of the Bay Area good. And they shouldn’t be considering we paid less than $7 for all 4 items, which is probably less than half of the price of the more well known bakeries discussed in this thread. The flavors of each items were well-balanced.

The thumbprint cookies tasted buttery with sliced almonds around the cookies. The mocha puff had a laid back and pleasant coffee taste. The eclair had a light custard in the middle with a layer of chocolate on top. All 4 items were enjoyable. None of the items used expensive ingredients, just very solid and great value pastry for Silicon Valley.

Compared to the items from nouveau faux-Parisian/ Asian bakery chains- Paris Baguette, 85C, Sheng Kee from Korea, Taiwan, Hong Kong that are prevalent and popular in the South Bay, the quality of the items we got from Copenhagen Crown were effortlessly superior. One wouldn’t want to impress their dates by bringing them to have coffee at Copenhagen Crown, but I’d be returning to try other items.

Any other experience with the pastries there?

Picture of half-eaten cookies and puff in their paper bag from last week. 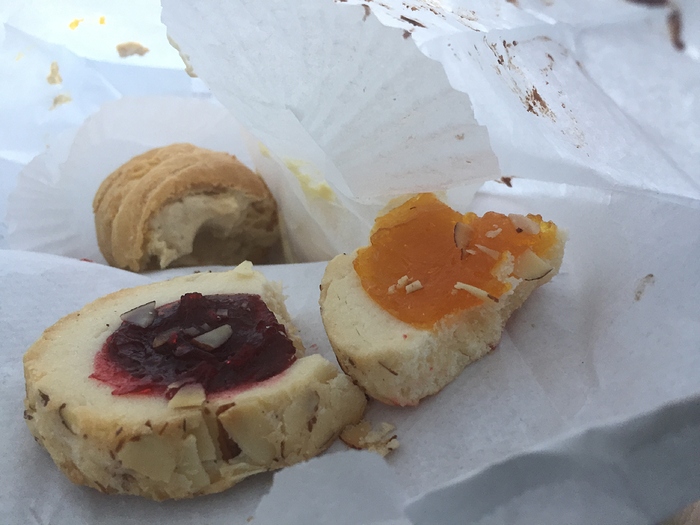 I think their strengths are in butter, cream (and almond). Fruity and chocolatey stuff are generally ok but don’t stand out because to taste fab, one needs to use good chocolate and jam but Copenhagen are priced economically so they have constraints. 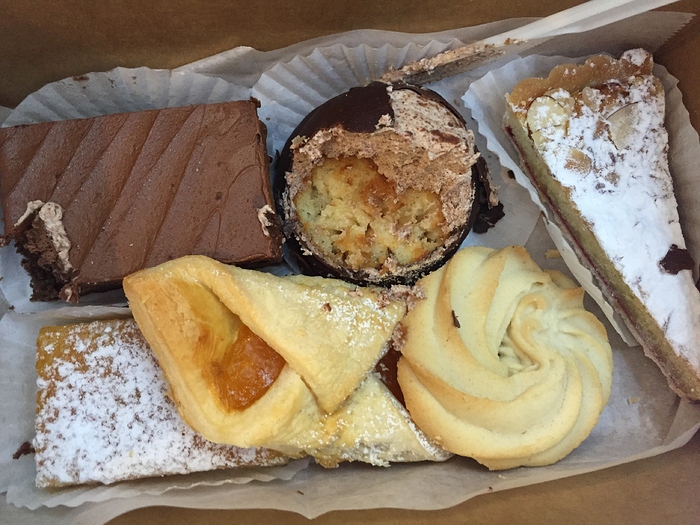 The almond bar was somewhat dense. Preferred the almond galette more. The kransekage was also a bit hard and dense. The mocha filled florentine cannoli was a bit unremarkable. Next to try: the larger danish pastries. 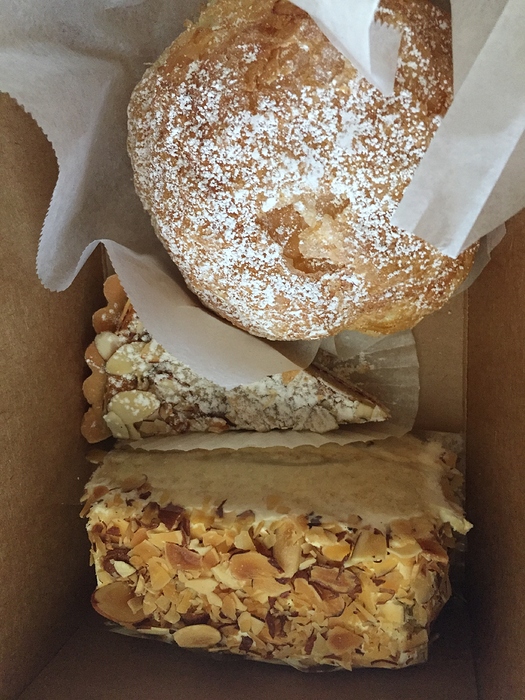 Tried a couple of items based on the recommendations on one of the owners.

The burnt almond cake (bottom) was delightful. Light and airy cake, mildly sweet. we liked it a lot.

The custard puff (top) had very light custard inside and also mildly sweet. Would get it again for sure.