Saw a mention of the dry pho at Pho Tan Hoa in the Tenderloin from an article in the Chronicle posted in this thread and went there for lunch to try it.

They have two dry pho dishes on the menu, one with beef and one with seafood. I ordered the beef one, the Dac Biet Pho Kho, #26 on the menu. You know how you can get pho with raw steak on the side? This was like pho with the soup on the side. It was topped with the requisite brisket, tripe, tendon, thinly sliced steak that was lightly cooked, onions, and cilantro. Also had some crumbled peanuts. The noodles were cooked and lightly seasoned with something, they had a dark tinge. Also on the side were a small bowl of what tasted like nuoc cham and the herb plate that usually comes with pho.

I wasn’t sure how to eat it so I dumped the herbs and bean sprouts from the herb plate into the bowl of broth, and then took them out of the broth and mixed it in with the noodles and beef after they had softened slightly. Drank some of the broth in between bites and used the nuoc cham as a dip for the beef. It was quite good. Without the broth covering it up, the beef and especially the offal parts had a more pronounced beefy taste. The thinly sliced steak stayed tender. Noodles were chewy and flavorful from the seasoning, and the peanuts added some crunchiness. 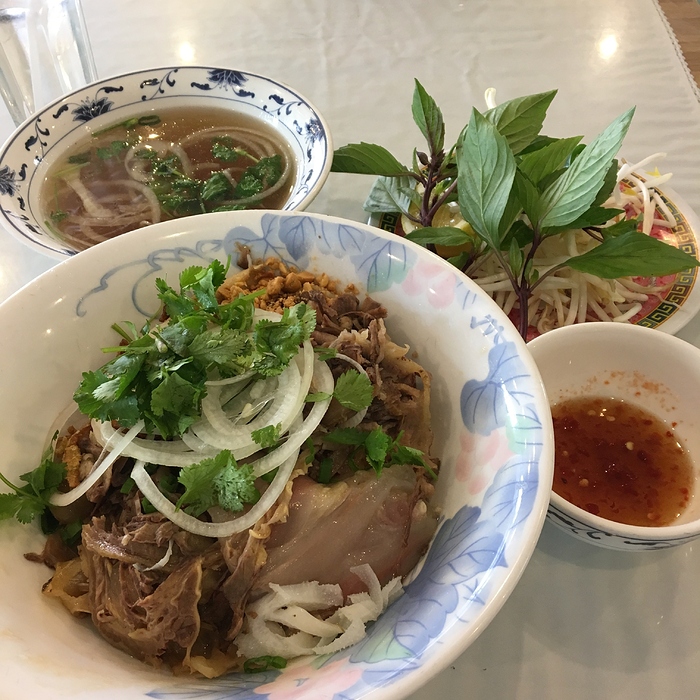 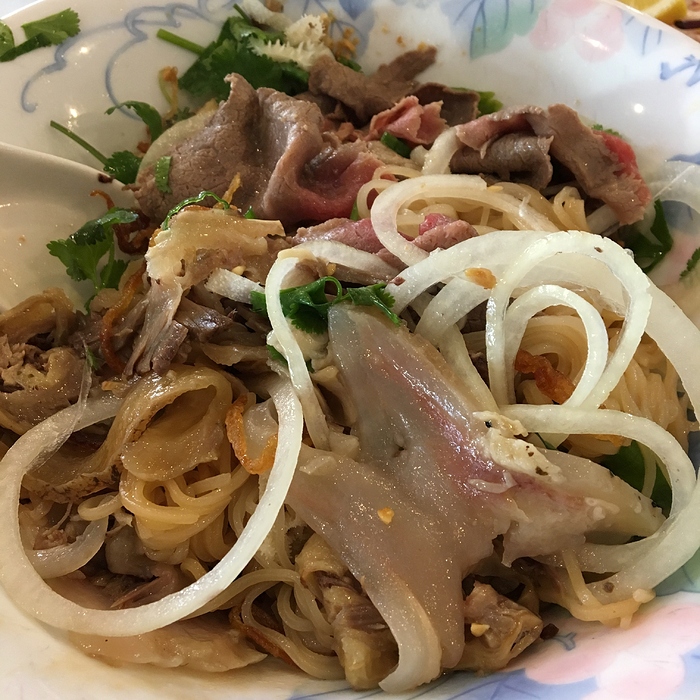 Your photos make it look delicious. If I may ask, what kind of camera, lens and settings did you use? It’s tough to get good shots under restaurant lighting.

Thanks, just an iPhone 6s without flash.

Many regulars, as well as regulars on these forums, order the dish dry with broth on the side. I must say that most of the time I prefer the noodles wet, even when your observations about more pronounced meat taste that comes from the diminished role of broth is true. For me, there is a certain satisfaction that comes with finishing a bowl of steaming hot noodles and feeling sated and warm inside.

Oh yeah, I’ve had the pho at Pho Tan Hoa a few times before regular-style with the noodles in the broth and liked it. And I usually down any remaining broth after finishing the noodles if the broth is any good. This was an interesting change of pace though.

Whenever I do takeout from my favorite Pho place, I always assemble the meat, etc., in a large bowl, and then heat up the broth to pour over everything. I guess that’s kind of the same thing.

Whenever I do takeout from my favorite Pho place, I always assemble the meat, etc., in a large bowl, and then heat up the broth to pour over everything. I guess that’s kind of the same thing.

That’s pretty much what it is. The only difference were the noodles, which were softened and seasoned, plus the addition of the dipping sauce and the peanuts.