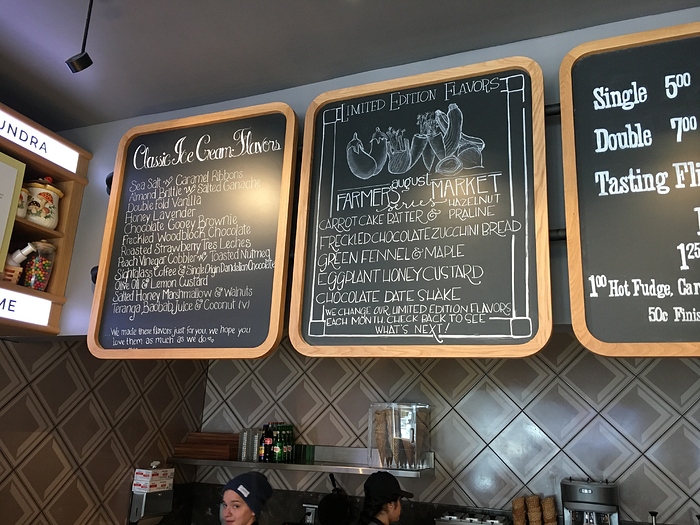 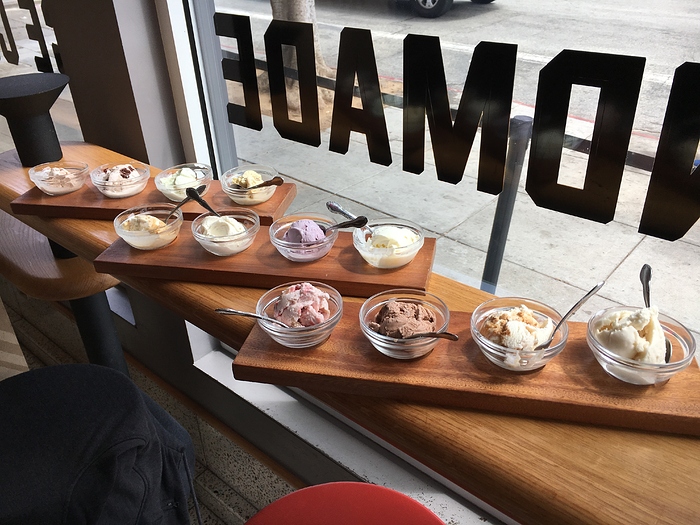 Completely empty at 11:30 on a chilly Sunday morning.

The base is smooth, not sticky or dense. Salt notable in a few flavors in and I suspect is responsible for the texture.

For me, palate fatigue kicks in quickly for savory/novel ice cream flavors so the four ice cream flight is the way to go. Also, samples can be misleading because it is difficult to get all the components in one spoonful for some of the flavors.

Out of 12 flavorswe tried, not everything was successful but nothing was out right gross. I’m excited to see them partnering with local businesses like dandelion chocolate, but disappointed that they haven’t connected with any restaurants like they do in Portland (e.g. Pok pok)

wouldnt get again, but had positive points

Completely empty at 11:30 on a chilly Sunday morning

That was my initial thought, but there was a line out the door by noon! Bi-rite and Boba Guys also had a surprisi long lines today considering Outside lands and the gloomy weather.

Line around the corner for $5-a-scoop meh!-quality ice cream. Welcome to what’s become of San Francisco.

Got a chance to drop by the new Hayes Valley location yesterday. No line at 11:30am on a very warm Tuesday. Agree with the assessment above on the Peach Vinegar Cobbler. It was really superb and a nice balance between sweet and sour. I was wondering if they increased the milk fat content somehow for that flavor as it seemed impossibly creamy to my taste.

I also tried a couple of their rotating flavors: one with blood pudding and another with mealworms and crickets on a matcha base (both Halloween-inspired flavors). The blood pudding flavor was legitimately interesting. I noted a good deal of salt and umami, and even a little Full English effect within the creamy sweetness of the cream. Certainly nothing I’ve tasted before. Sadly the cricket ice cream was less interesting. It was basically a good matcha ice cream with crunchy texture. More of a gimmick, but worth getting if you’re into that particular gimmick.

Everything I tried was good, but I’m a little lost on why one would wait more than a few minutes in line for it. It’s very good ice cream, but that’s it.

The Hayes Valley location is open.

I returned to the Fillmore location today and tried their five limited edition flavors.

The high sweetness, saltiness, and slight slight taffy-like consistency jumped out at me. Curious about the consistency, I looked at the ingredients, and learned they include tapioca syrup, guar gum, and carrageenan. 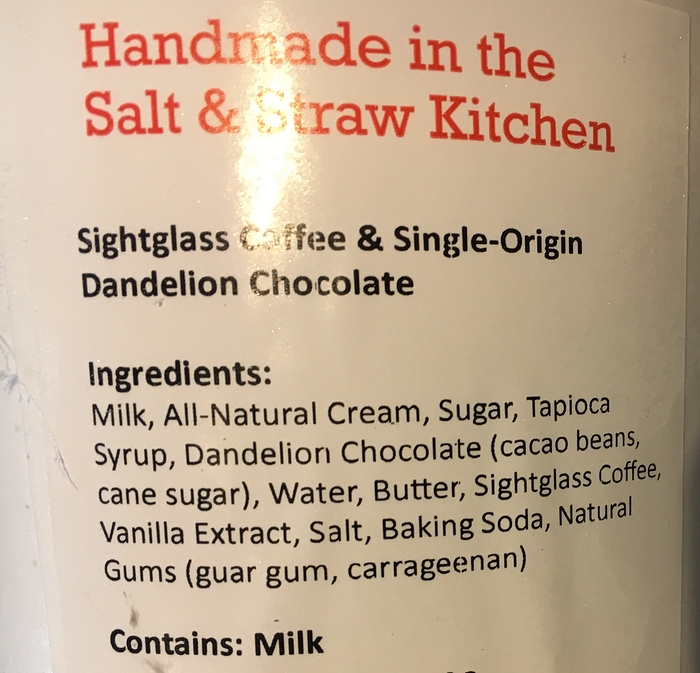 With the exception of the Meyer Lemon Meringue, the limited edition flavors didn’t feel integrated and seemed more like random flavored stuff suspended in ice cream base. I did like the corn flavored bits in the Sweet Corn and Waffle Cone favor, which tasted good within the creamy surrounds. 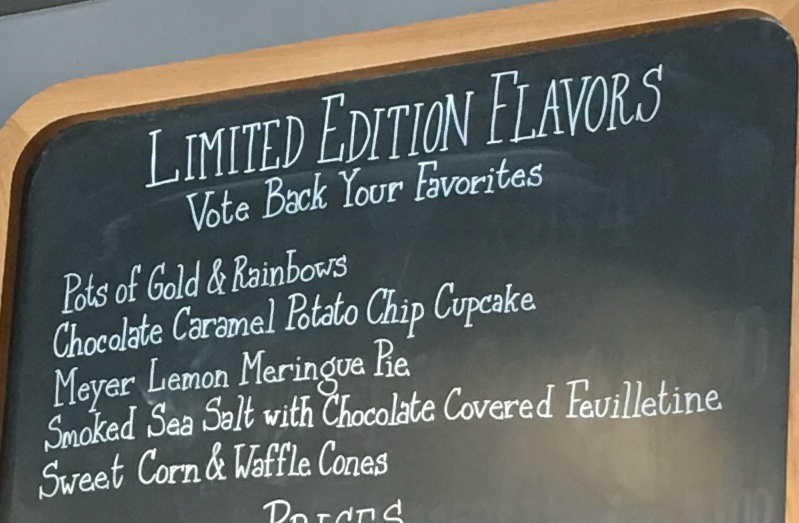 Have you tried Garden Creamery yet? They have interesting flavors and not crazy sweet. I checked Shakedown on Geary and it’s temporarily closed, I wonder what happened.

I can’t remember specifics, but remember liking everything I’ve had there, including coconut-based ice cream. I’ve had the chimney cone on my bucket list since reading your post about it! 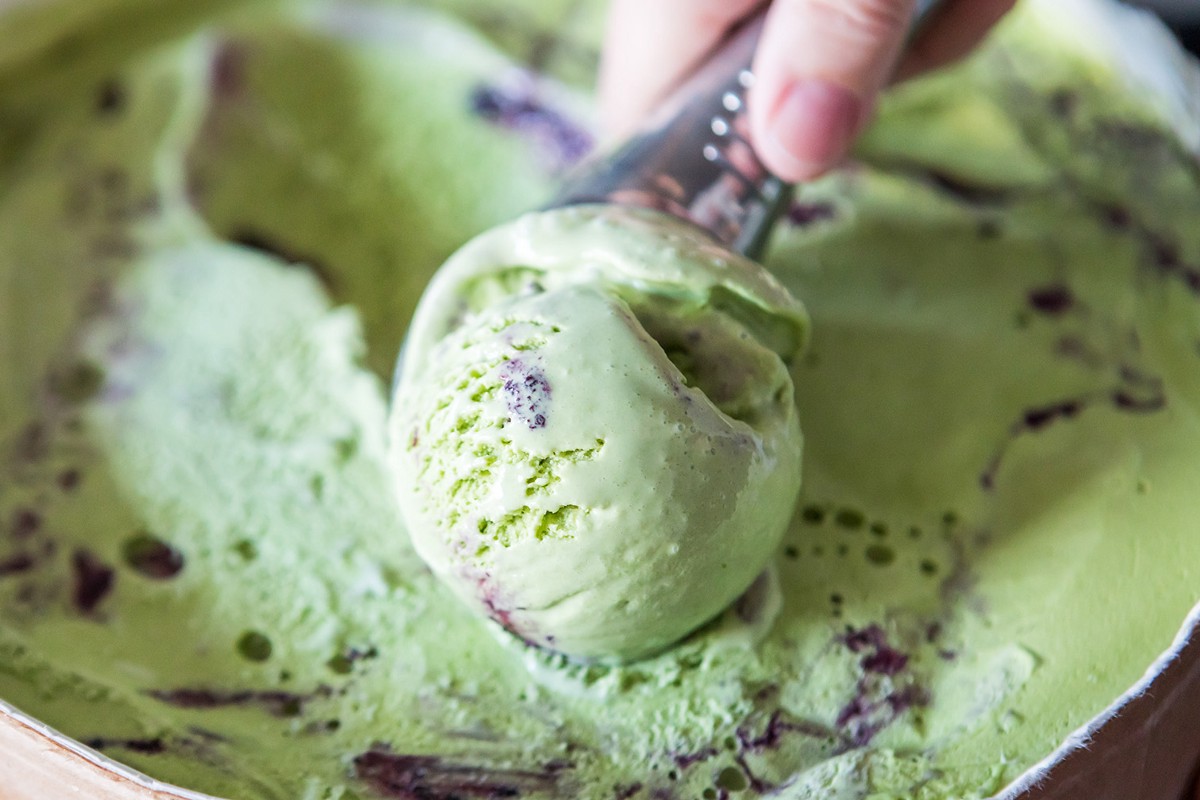 Portland’s coolest ice cream shop sets up on the Peninsula

Salt & Straw also opened in Burlingame. The Dracula Blood made with pigs blood seemed kind of gimmiky but it actually works. I ended up getting honey/lavender which was pleasant and milky, the lavender present but not overwhelming and tenfold better than the cloying perfumey version at Bi-rite, which is an ice cream shop I just do not get the appeal of. The waffle cup cone was ok, not particularly different or distinguishable from the standard issue. They don’t do the simple flavors like chocolate or vanilla , mint etc. That’s probably a good thing because you could get a good version from McConnells or Jeni’s at the local supermarket. I usually never go for the unique flavors, but I’m going to say Salt & Straw lives up to the hype for me, they do that niche pretty well based on the limited flavors I tried. I usually I find creativity in ice cream gimmicky and misses the mark or is just downright disgusting. The blood ice cream tells me they know they’re thoughtful at what they’re doing.

If you’re going to the Burlingame shop, go after 6p on a weekday. (just went right now) Busy, but only a couple people ahead of me. A half an hour earlier, the line was out the door. On weekends, probably forget about it. It’s open til 11p.