Now we just need Blue Star Donuts to open up an SF outpost.

This is very exciting, not just because they make good ice cream but also because they create flavors based on dishes popular at local restaurants. That’s one step further than Humphrey Slocumbe, which uses bluebottle coffee and local beers during beer month.

Interesting! I’m going to the Venice location in a few weeks but I’d be very curious how they pay homage to famous SF dishes. 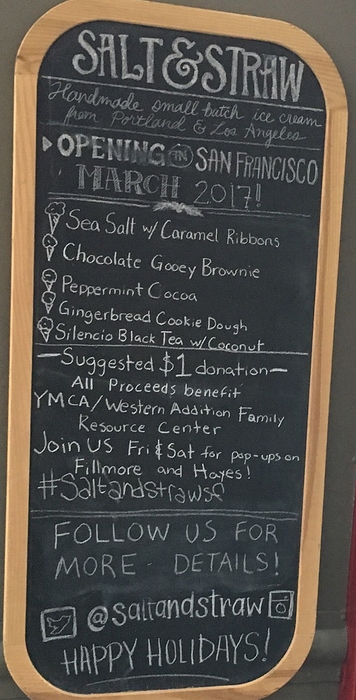 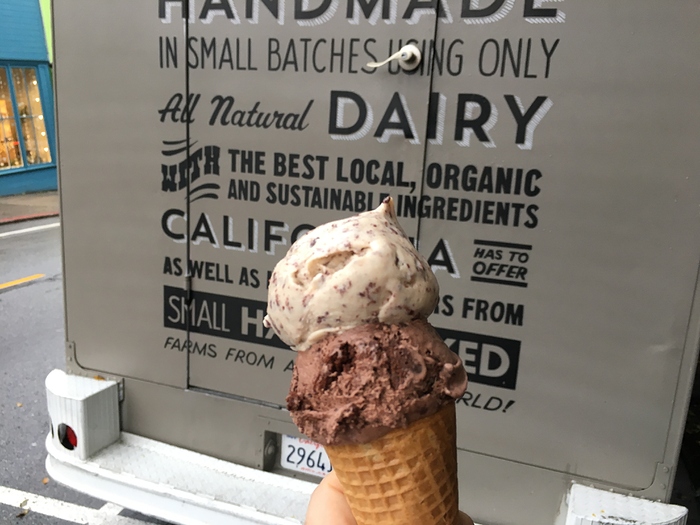 The rain squashed my weekend plans, so I visited the Salt & Straw pop-up truck when the rain let up. There’s one later tonight in Hayes Valley and they’re asking for $1 donations, which go to the Western Addition family resource center/YMCA.

The flavors were all solid, and given how they’re using this for promotion, good quality and contemporary, but safe. My favorite was the gingerbread, which managed to be encase baked goods in ice cream without any part being dense.

They tend to use ice cream base from local purveyors, and said they haven’t decided on one for their upcoming location.

How much does a double scoop cost?

$1 was the suggested donation for whatever. The two of us had just eaten lunch, so each got two half scoops each and got a taste of the remaining flavor.

Oh got it. I thought they were asking for donations on top of the ice cream price.

How’s their salted caramel vs BiRite’s?

Hmmm… even though I’ve had Bi Rite’s several times, my memory might be tainted by more recent experiences with the far less good Three Twins version I’ve been getting at Gross Out. IIRC, compared to Bi-Rite’s, the salt is more prominent in S&S’s version, its silkier, not as homogenous (it has a ribbon of caramel), and the caramel is less assertive. I think I prefer S&S’s version, and thought the same when I was in Portland, but I’d want to do a side by side at some point.

I visit the one on Larchmont in LA fairly frequently. Their single scoops are $4.90 and it’s $10.50 for a pint. I can’t imagine it’d be any cheaper here. I like their ice cream a lot, though I’m not a big ice cream guy. Their seasonal flavors tend to be more memorable. I never feel like going back to Bi-Rite and only end up there if someone else wants to.

I probably shouldn’t say I grew up in a time and place when ice cream was a nickel a scoop. Maybe not “artisanal” but it was made on site.

IIRC, compared to Bi-Rite’s, the salt is more prominent in S&S’s version

Even more? the salt in Bi-Rite’s is already quite prominent to me…

S&S has a split scoop. For $1 extra they allow you to get 2 flavors in kid sized portions. It ends up being much more economical and allows you to get 2 flavors without pigging out on a double scoop. Plus it’s like Chipotle when you get 2 half scoops of meats but it ends up being more meat than 1 scoop. The people who work at the S&S down in LA area are very generous and the scoops and 2 split scoops are plenty.

So, I am 45 and things have changed a lot even since what I remember of my youth. I marvel at how prices have increased and count myself lucky that I can still afford things like this. It’s crazy here, no question. I’ve traveled extensively internationally starting in 2008. At the beginning I did feel that stuff was expensive abroad, but in recent years, everything seems cheap compared to mid-to-high end restaurants in the bay area. With the possible exception of Switzerland.

but in recent years, everything seems cheap compared to mid-to-high end restaurants in the bay area.

USD vs Yen, Euro, GBP, etc… has been exceptionally strong these past few years. Wife and I have been very pleased at what we need to spend in countries that have previously been known to be “expensive”.

Prices for food and beverage mid to upper tier in the Bay Area are unsustainable. Unfortunately, rents and labor costs are too high. New restaurants just come and go, turnover is probably greater than the national average. 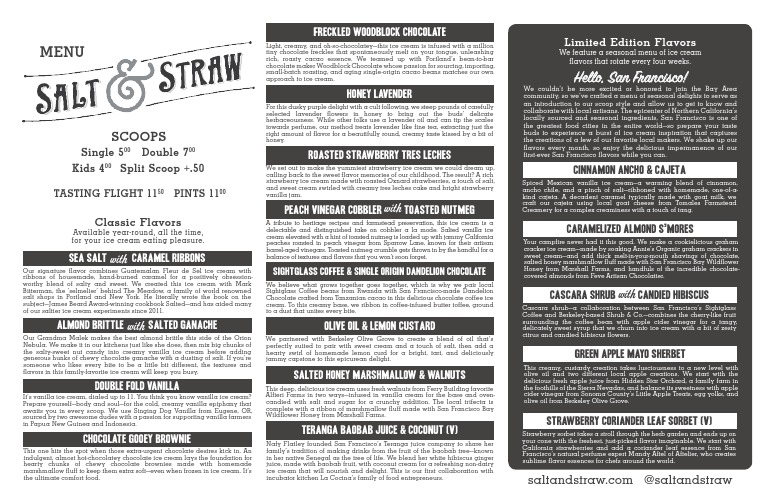 The line of people outside the door had around 15 people at 2:30 PM today, a Tuesday afternoon. Maybe another time…

I went over the weekend. A double-scoop ($7) with waffle cone ($1.25) for Olive Oil w/ Lemon Custard and Roasted Strawberry with Tres Leches. My friend’s scoops were more successful - the Cinnamon Ancho and the Carmelized Almond S’More.

Maybe it’s just not my thing - mine was too sweet and I actually only ate half. Yes, I was probably the only one to throw mine away half uneaten after waiting 1.54 hours. The problem with mine was that the lemon custard and the roasted strawberry was like eating macerated fruit, or fruit jam, with dense cream. It was too much. The texture is very dense, but I didn’t taste the olive oil, and overall just too sugary. The waffle cone is excellent, though.

We waited for 1.5 hrs - just before 9:30pm until just before closing (11:00pm). Skip the line and go grab a pint! But that’s why the line takes so long, people do that and go straight to the sole cashier. So, customers who just got their ice cream scooped have to wait, and it holds up the line. They really need two cashiers - one dedicated for the take-out pints.