A stop at Ming Kee for lunch on Saturday. Ming Kee has been well recognized for their roasties prowess. We ordered a couple of rice plates.

Roasted cha siu pork, half lean, half fatty, with soy sauce chicken. Roasted pork was odd. They came pretty much all lean despite asking for half lean and half fatty. It needed more fat, though the taste was fine. Win’s on Taraval has an edge.

I spent the whole meal complaining to myself about the soy sauce chicken before I went home, looked at the picture of the menu, and realized that I didn’t see they had two types of soy sauce chicken on my cursory read of the menu- yellow feather chicken, and regular. No wonder the server seemed to pause and confirm back to me that the regular was what I wanted to order. Duh. Get the soy sauce yellow feather chicken. The regular, especially the breasts, was too lean and had minimal chicken flavors. The marinade, while adequate, didn’t get far under the skin. The marinade could use a bit more subtlety since the soy sauce tasted slightly on the harsh side. 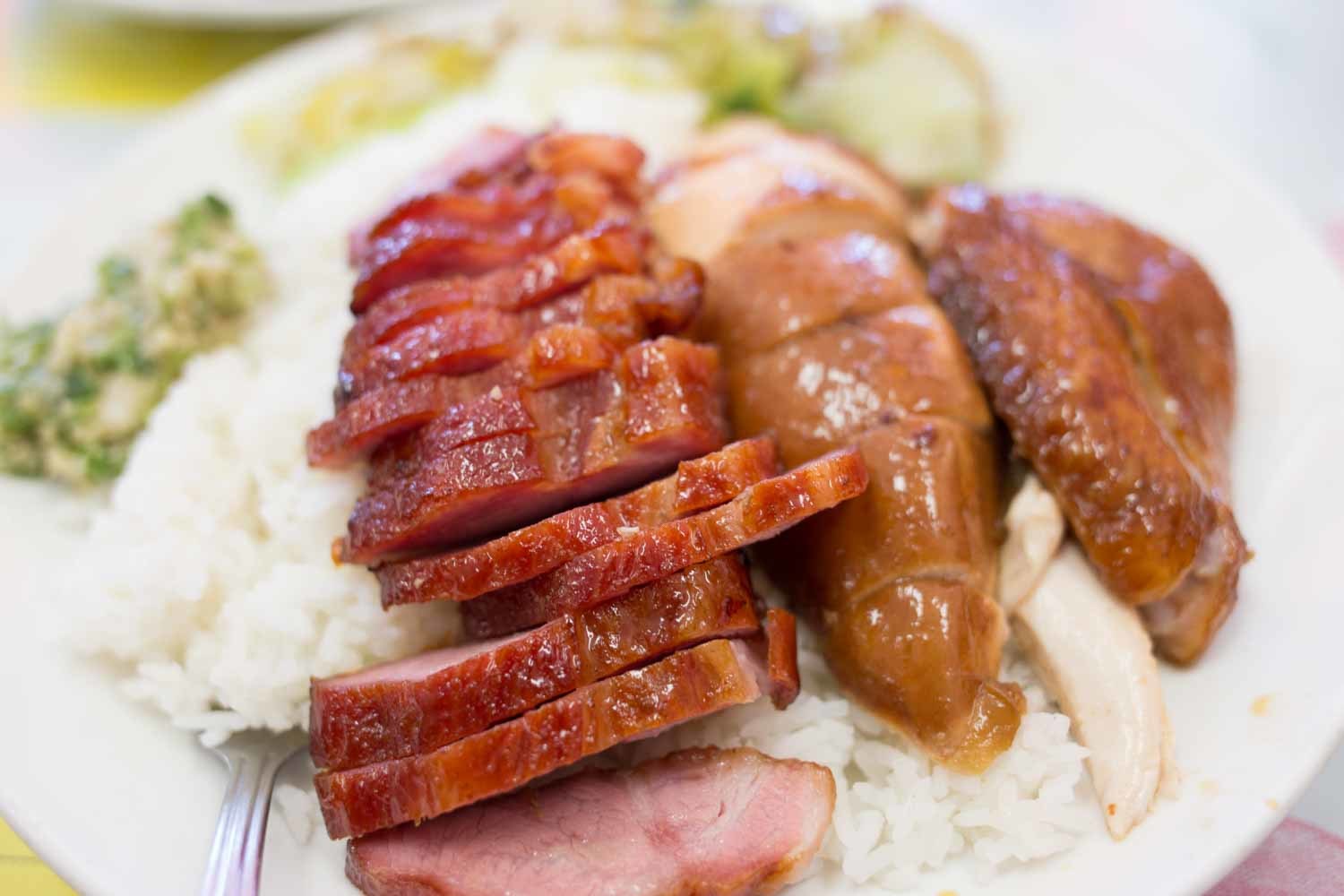 Yellow feather empress chicken: I liked this the most out of the 3 types of meat with the gentle and subtle seasoning. 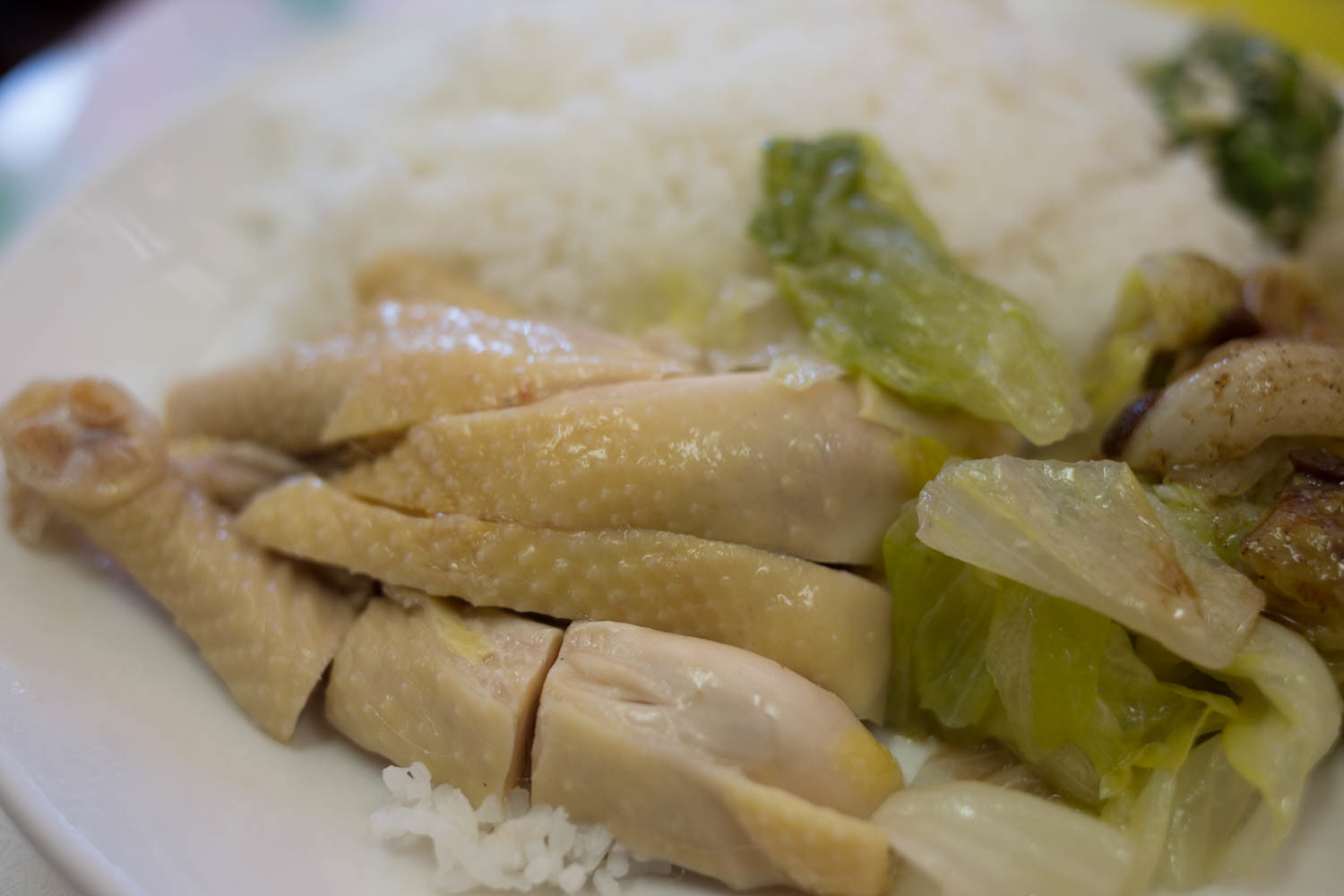 Came with hot tea. Vita 250ml drinks in tetrapaks available in the fridge.

The assessment of the dishes might read less than flattering (because consumption of roast meat inevitably invite comparison to the better renditions from Hong Kong) but the meal overall was more than satisfactory with $20 out the door for 2 adults and 2 small kids.

Eating at Ming Kee is like teleporting oneself to a cha chen teng in a working class neighborhood in Hong Kong- workers communicating loudly and efficiently to each other, people just sit whenever they please, a constant stream of people ordering takeout roasties, and never ending cleaver chopping sounds. Its a constant stream of vibrant energy. It doesn’t get too much more Hong Kong than that. 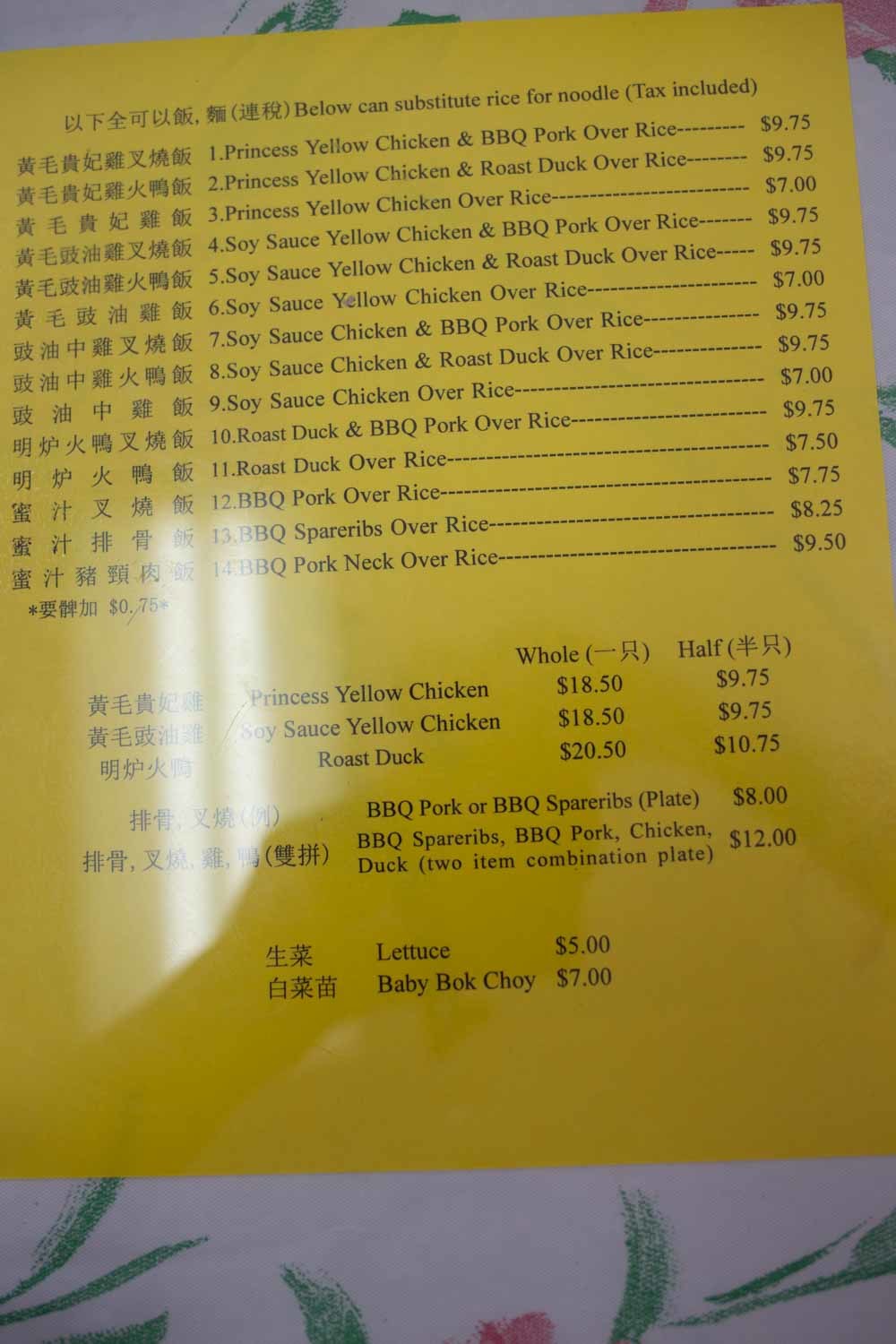 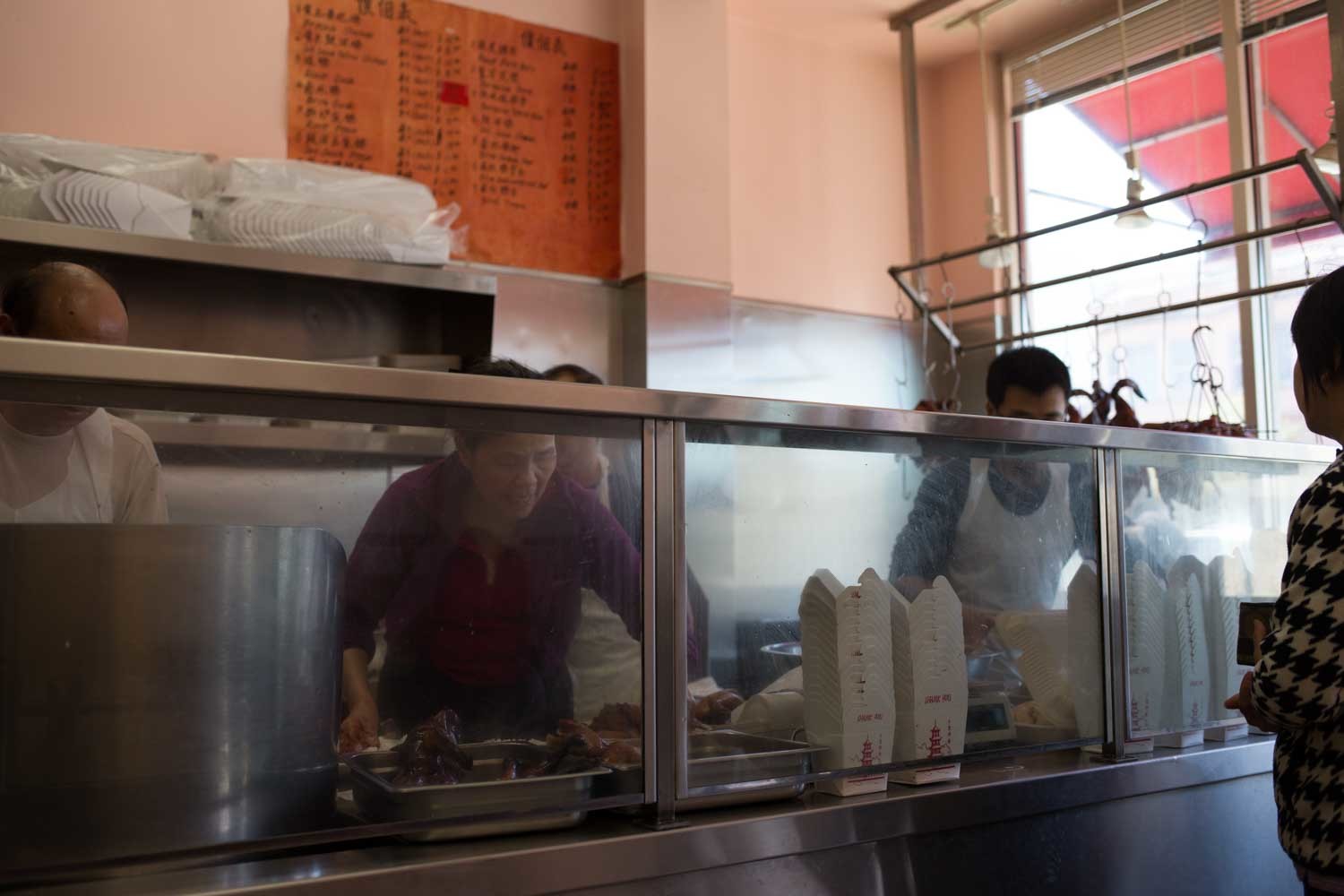 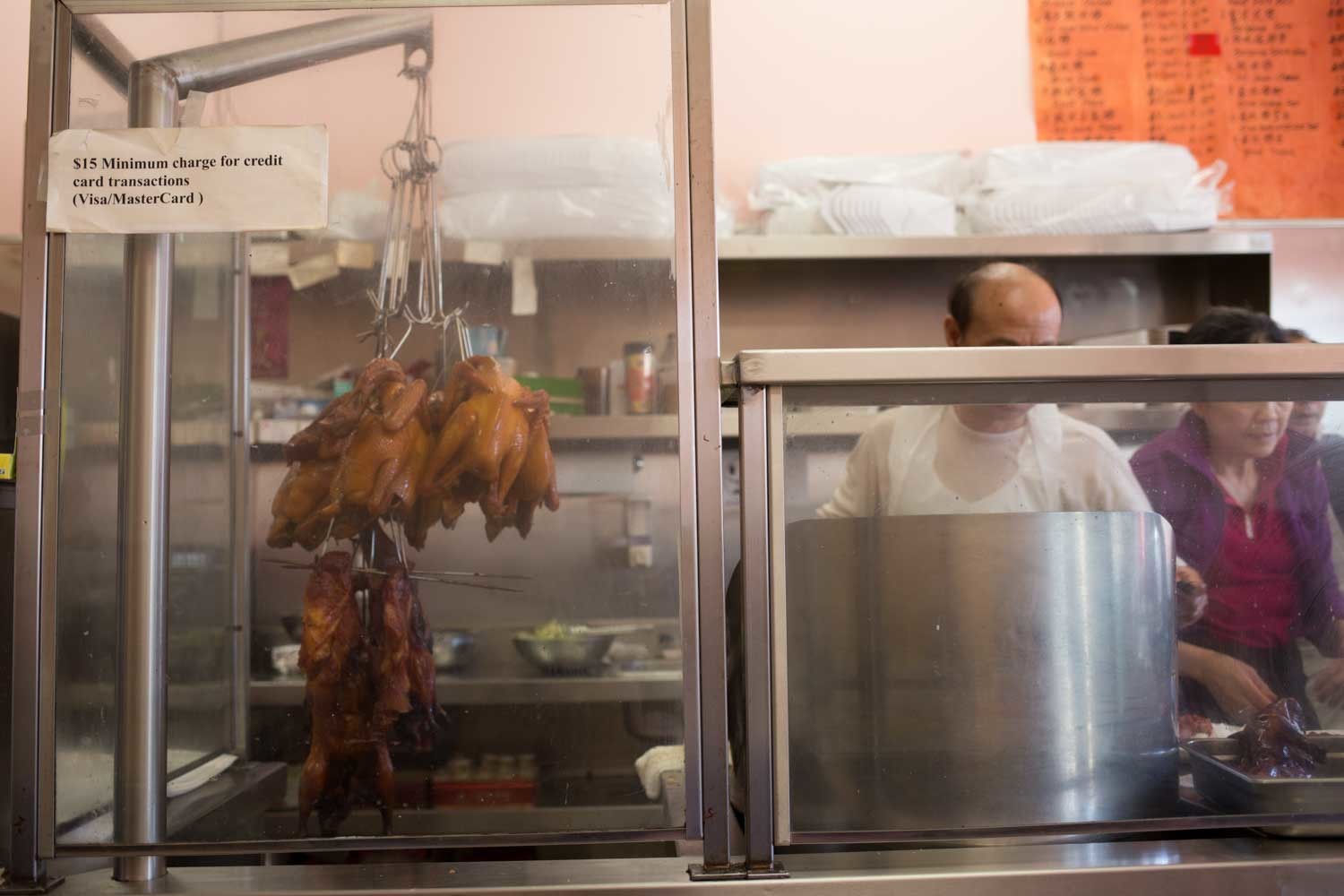 Nice write up. I live close-ish so get a rice plate once every month or so - usually the BBQ pork, sometimes the half soy sauce chicken 1/2 pork. Sometimes I’ve tried to order other things, but depending on who is behind the counter besides the dude in the photo communication can be an issue. The only thing I’d add is that the plates come with a really delicious ginger/garlic sauce that really kicks up the flavor of things.

I worked at City College for a long time, and the pork neck was actually my favorite of the roasted meats. Moist, good layer of fat, a tasty treat. 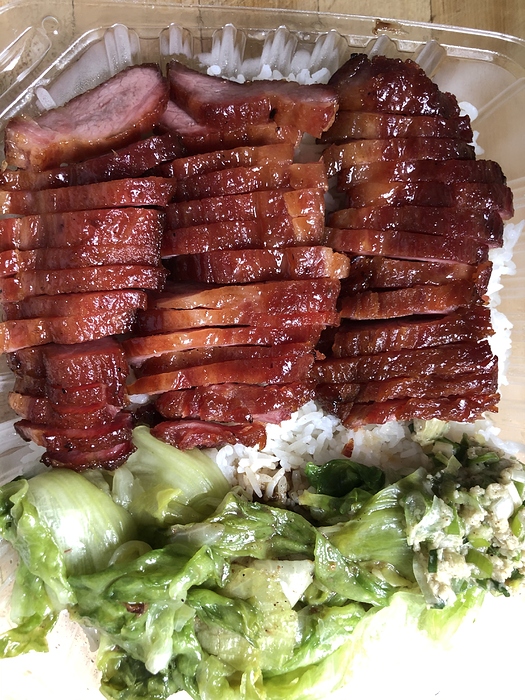 Have they upped the quantity? That’s a lot of meat for the bed of rice.

I think they’re finally starting to acknowledge my regular customer status! No it did seem more than usual. Typically I come in after work when they have almost nothing left but this was midday so the meats were plentiful.

I don’t know how much they charge the char siu by the pound. Assuming its around $8-9. Those meat looks like they are close to a pound. So its like getting the rice and veggie for free.

What would I order there to avoid five-spice flavoring?

The soy sauce chicken and empress chicken should not have five spice (unless five spice is in the soy sauce marinade… I can’t recall that though). The bbq pork/spareribs (the red one) should be fine. Avoid roast duck and the roast pork.

Been too long since I’ve had the BBQ pork over rice. Now cost $10 - still a great bargain, more than I can eat for lunch. 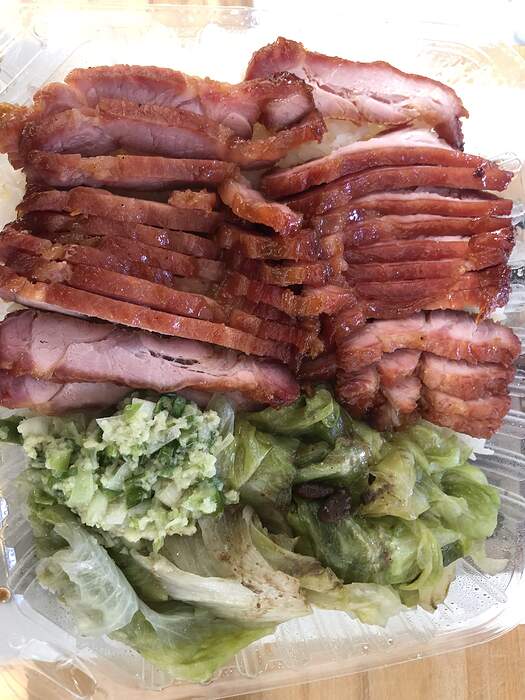 We still have to try them - how long are the lines for lunch ?

No real lines, just a handful of people. Plenty of selection at lunch, later in the afternoon less so. Closed on Wednesdays.

Yesterday we had the chance to try Ming Kee for the first time with roasted duck & BBQ pork plate and really liked it. Nice flavorful meat, especially the pork which had the right balance of lean to fat. The roasted duck leg had plenty of meat and crispy skin (perhaps the only minor quibble that the duck was slightly bit too salty). The scallion-garlic dip and roasted lettuce are great addition. Great lunch and will be back soon and it was nice to chat with the Chinese Grandmas while waiting in line 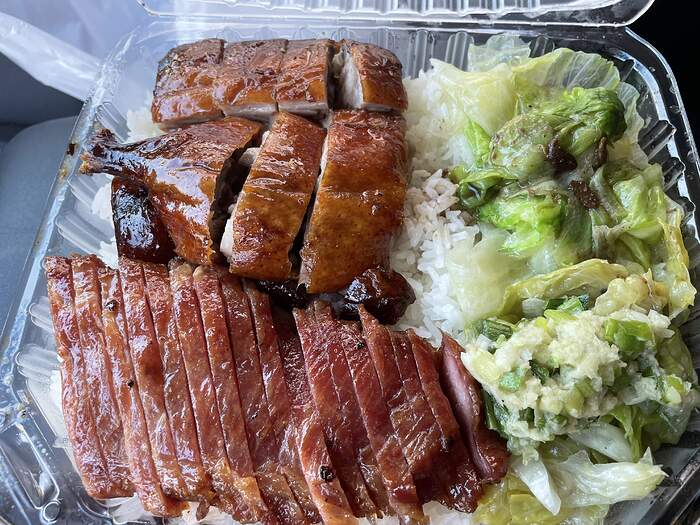