House of Prime Rib is a San Francisco classic, opened in 1949. It’s similar to the Lawry’s chain of restaurants from L.A. - both focus on prime rib and have similar sides (e.g. the “spinning salad,” and the seasoned salt). HOPR opened up a little later than Lawry’s though. I haven’t been to a Lawry’s but have been to HOPR several times, mostly for special occasions, as was the case for this dinner.

Very simple menu, they focus on prime rib and don’t veer off from that much. There is an off menu vegetarian plate and also a fish dish for vegetarians and non red meat eaters. There are 4 cuts of prime rib available - the standard House of Prime rib cut, the English cut, which is about the same size as the HOPR cut but sliced into three thinner slices, the smaller City cut, and the larger bone-in Henry VIII cut. Though not advertised on the menu you can also get the Henry VIII cut sliced English style like the English cut. Each prime rib entree comes with bread (cornbread and a sourdough), a salad, a choice of creamed corn or spinach, Yorkshire pudding, and a choice of baked or mashed potatoes. I forgot to note the prices but I think they were all in the $40 region.

Salad consists of iceberg lettuce, some other salad greens, diced hard boiled egg, tomato, and strips of what looks like canned beets. Tossed with flourish table-side - the waiter spins the salad bowl and pours a stream of dressing into it. Some seasoned salt I believe was also added as well. The dressing was a little sweet and tangy, kind of tasted like a Russian or Thousand Island. They give you a chilled fork for the salad which is a nice touch. Not a bad salad but mostly unremarkable. I think it might be there just so you can get some vegetables before the meat parade. 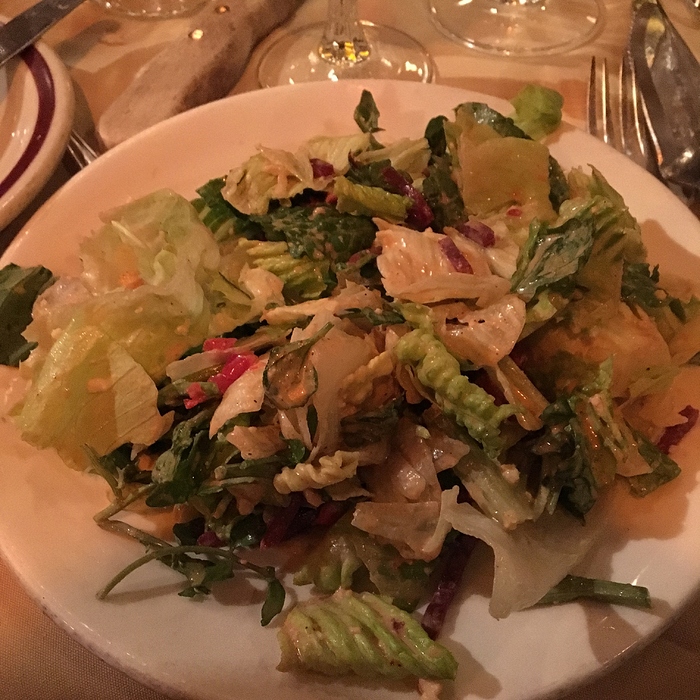 Served with three types of horseradish with varying intensity. I got it with creamed spinach and mashed potatoes. The English cut is my favorite cut. I think it’s because I can get more of the jus around each bite since the slices are thinner. A good piece of aged meat. Perfectly medium rare, juicy, beefy, and swimming in a salty beef jus. Creamed spinach was very good and creamy, there’s some bacon in there too, it’s not vegetarian. The slice of Yorkshire pudding was not bad. I think it’s cooked in beef fat. Could have been a little fluffier though. Mashed potatoes were topped with a dollop of gravy and were fine. I prefer the mashed over the baked as I think the baked potato is a little too big and I’ve run out of toppings before. 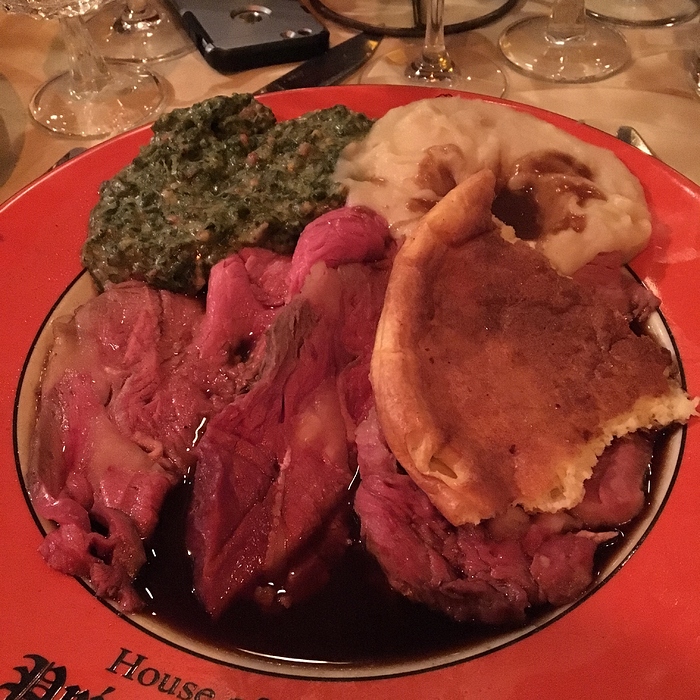 I think HOPR is much better than Lawry’s Beverly Hills. I go to HOPR regularly and like it a lot better than you do, based on your review. In fact, specifically referring to prime rib, I’ve yet to order it elsewhere and think it comparable to HOPR. I like the salad a lot, and always clean my plate. I love the traditional sourdough boule which has a great flavor even if it’s not the star of the show. I like the hot and medium horseradish sauces. I don’t always get offered the cornbread; it seems to be hit or miss, but I don’t desire it enough to enquire after it if I miss it. I usually get the King cut sliced English style, as you mention. Something about their beef selection and aging is to me so consistent that I rarely have any other prime rib or steak experience that I think even comes close, without even considering price. The full meal here is, as you say $40-48 depending on the requested cut.

The City Cut is the smallest cut, I’d say 8 ~ 10 oz. After a diner finishes any of the cuts above the City Cut, the carver will wheel out the meat wagon again to your table.

Your waiter will ask if you’ve “had enough, or care for seconds”? If you respond in the affirmative, the carver will delicately slice an additional juicy thin slice. Served on a fresh plate along with small dollop of cream of spinach and more mashed potatoes.

I think HOPR still provide seconds, but you may have to ask these days.

Try it at Harris’ a couple of blocks down the street on Van Ness; there’s no comparison at all.

Good or bad? I don’t think I’ve ever read anything about the prime rib at Harris’.

Excellent! Much better than HoPR imo.

It’s a big step up in quality for food, drinks, service and ambiance.

Go for the bone-in executive cut: 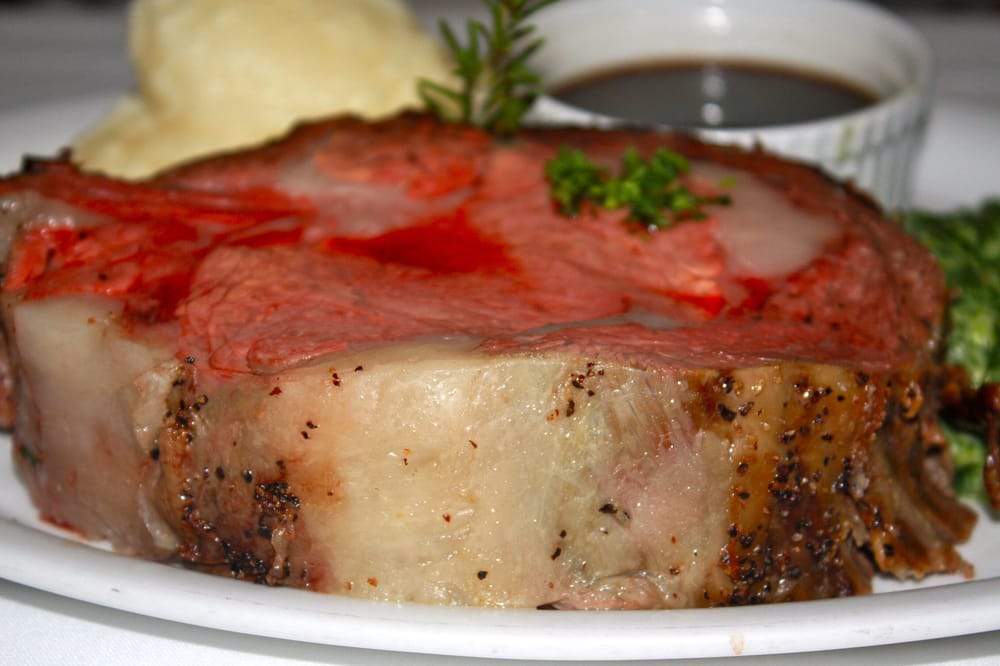 Thank you–very good to know. Truth be told, however, I’m happy with the prime rib at Garden Club.

Don’t know Garden Club but Harris has a nightly jazz trio and double-pour eagle rock manhattans served in a chilled carafe that are worth a solo trip to the bar, meat or no meat

Garden Club is an old-fashioned bar and supper club in SSF. It’s like being in the Midwest in the 1970s. Which is to say amazingly retro if you like that kind of thing, which I do.

Back again for a solo Sunday dinner, this time with a slightly better phone camera. 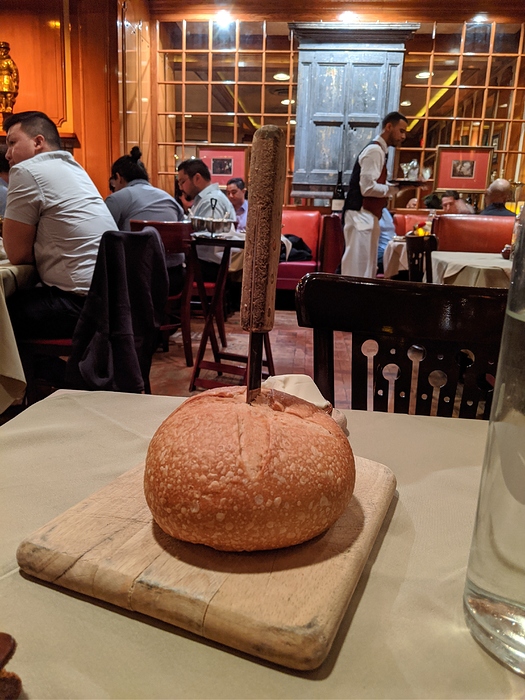 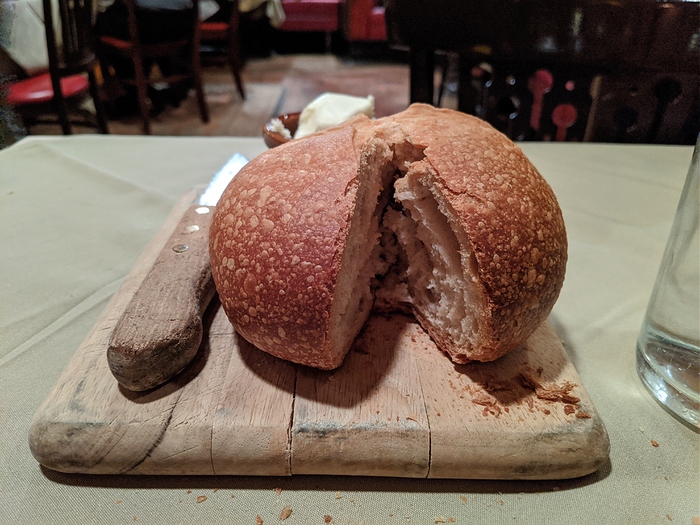 Gin martini, with some extra in the shaker. Generous amount but the leftovers in the shaker get a bit diluted. 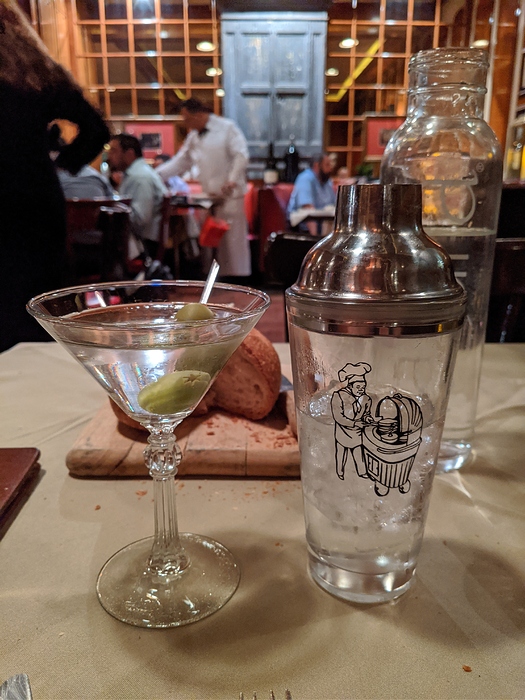 A waiter with a tray of fresh madeleine-shaped cornbread came around and dispensed them at each table. Took a bite before remembering to take a pic. 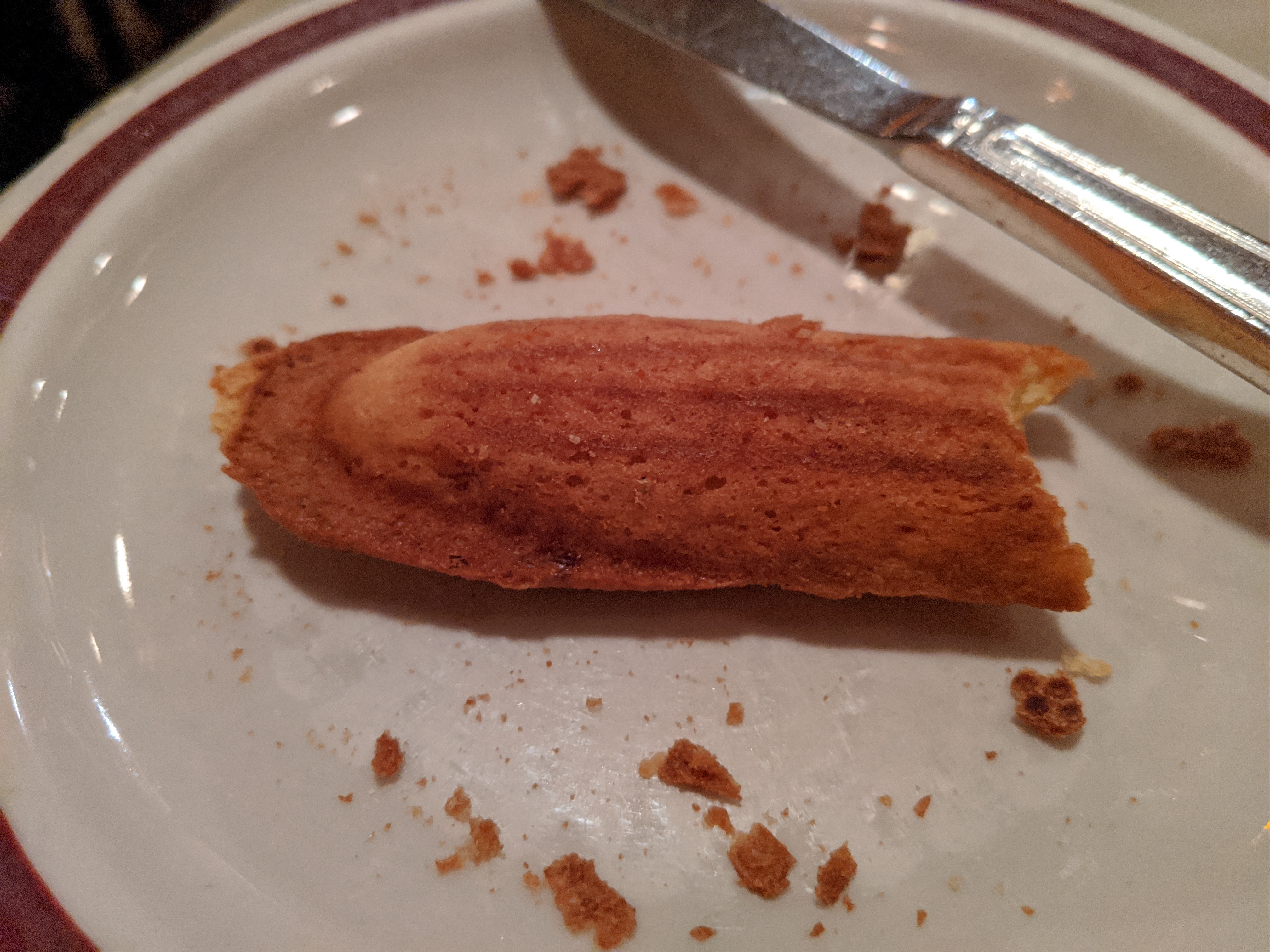 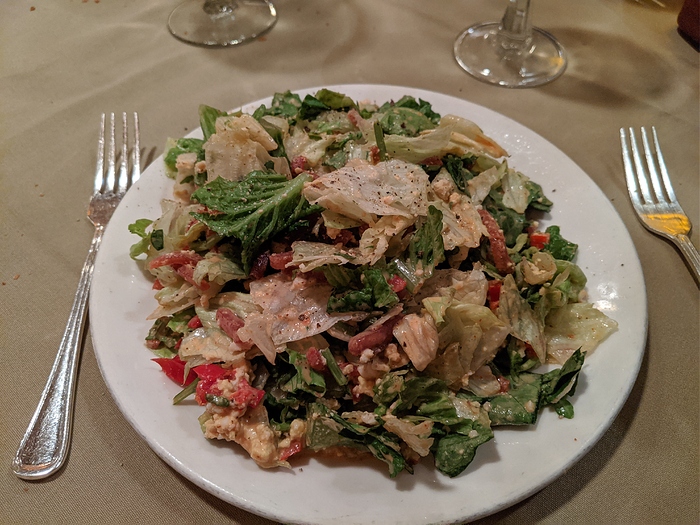 Not Lawry’s salt. MSG I think and some other spices. 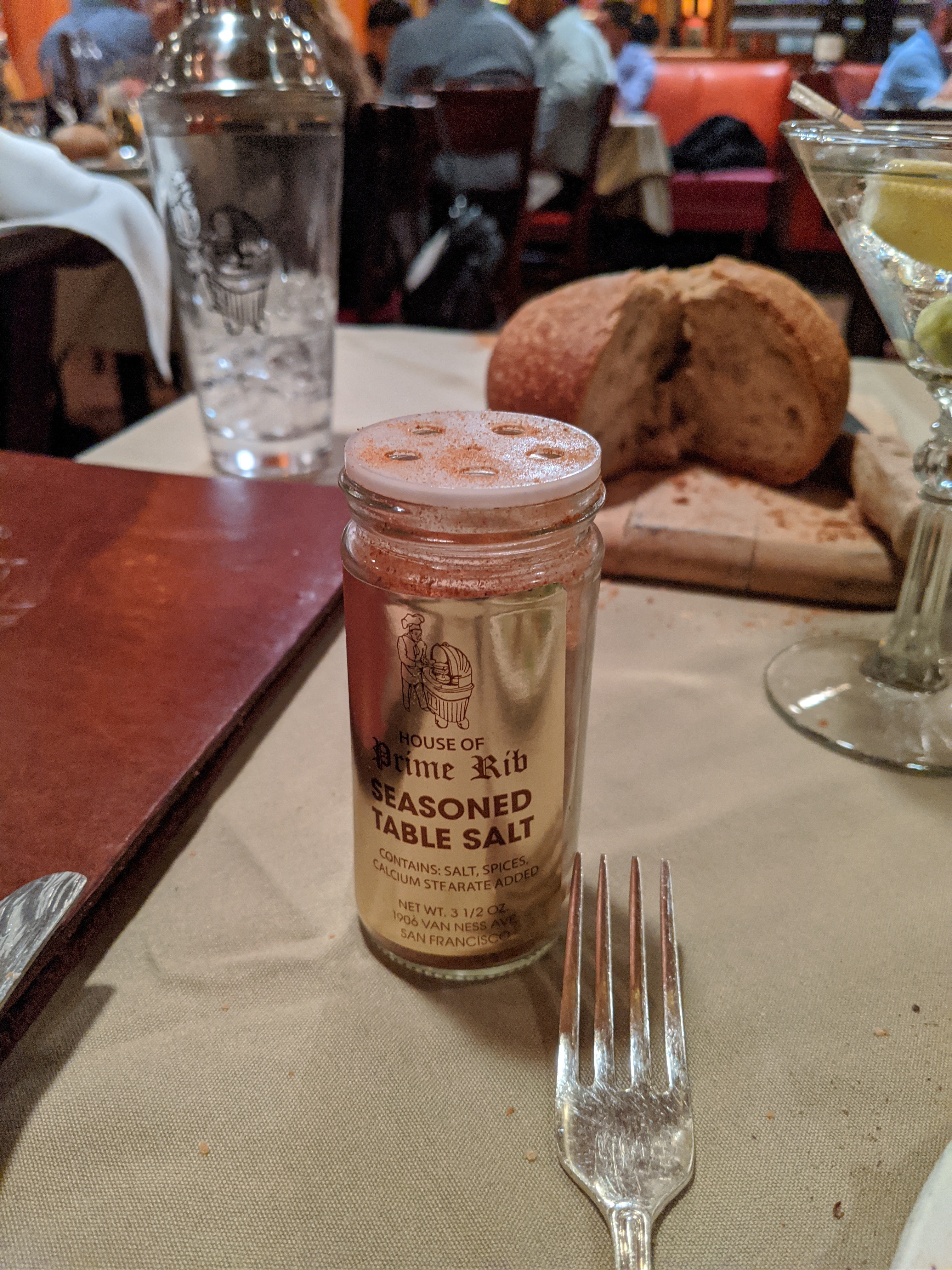 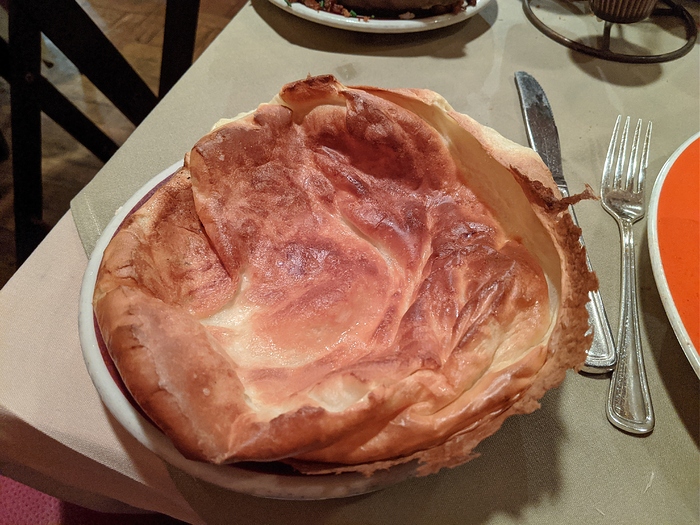 Got a baked potato instead of mashed this time. Basically a generous amount of bacon bits, a quarter stick of butter, chives, and a big scoop of sour cream with a little potato underneath

. I might have been wrong about the baked potato. Did not run out of toppings. 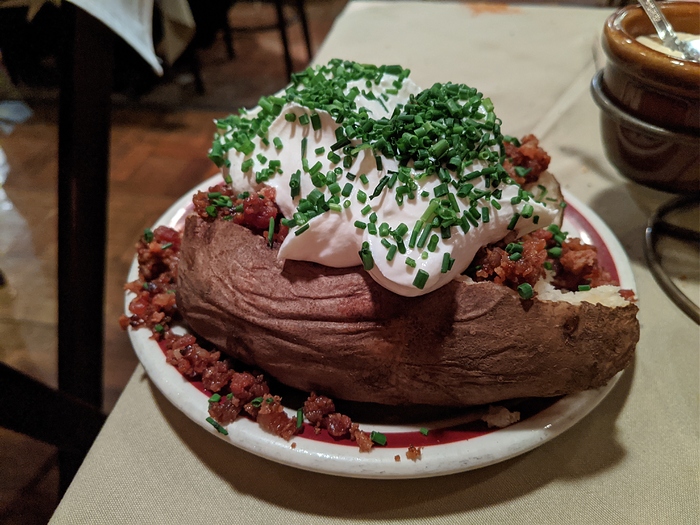 Horseradishes. Light, medium, and hot, although even the hot wasn’t super powerful. You can also get a beet horseradish and/or freshly grated horseradish by request. 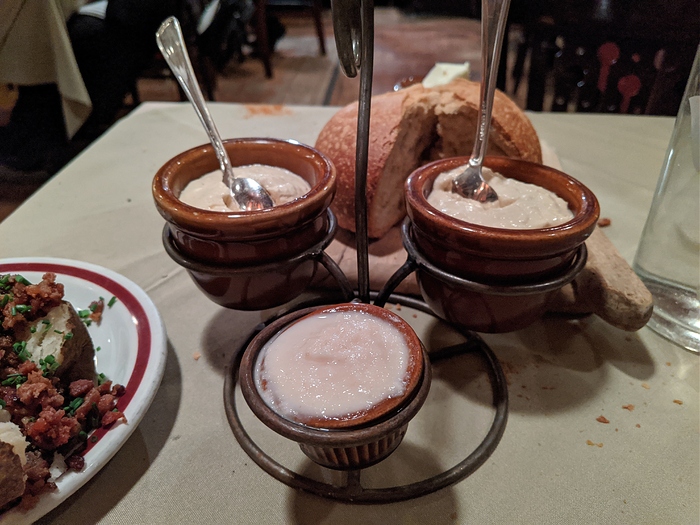 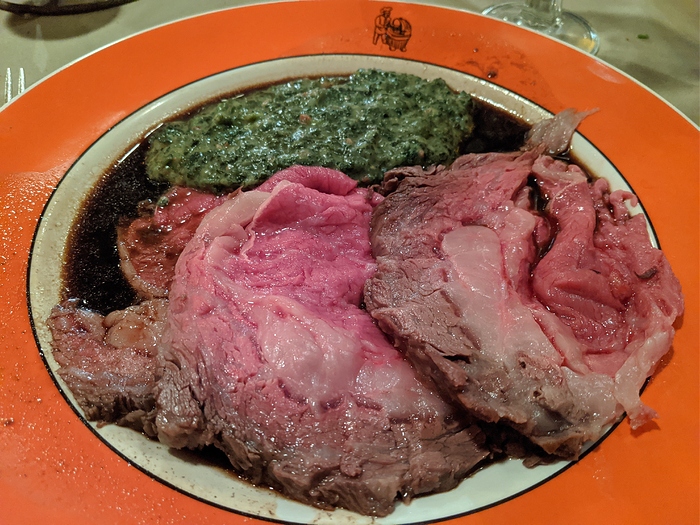 As delicious as usual.

The short menu. I recommend getting the prime rib. 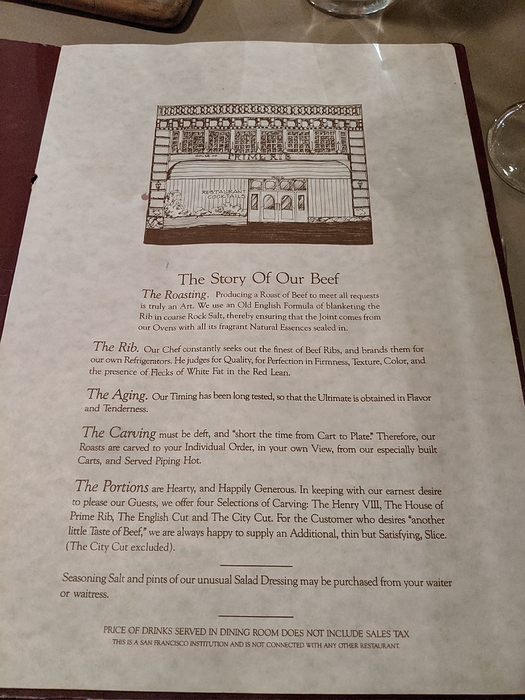 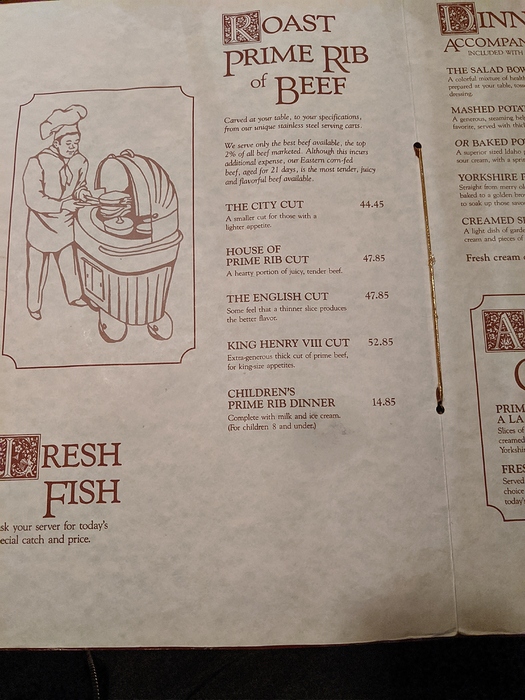 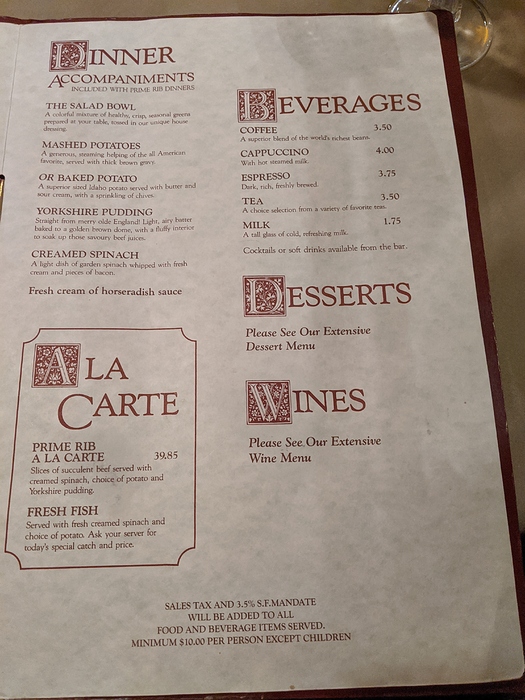 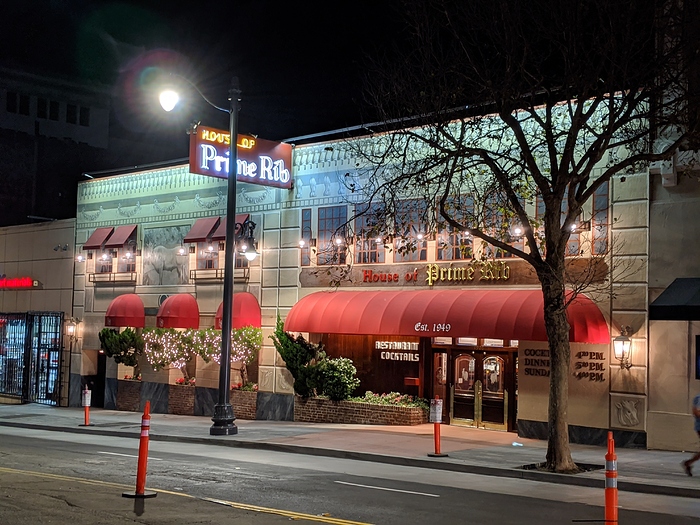 First visit back to HoPR since the beginning of the pandemic, and happy to report that it was as good as before. I may have just been hungry but the beef was really good tonight, tender and juicy. Prices are up slightly but still a good deal, the English cut was around $55. Sorry for the repetitive photos but they do pretty much only serve one thing 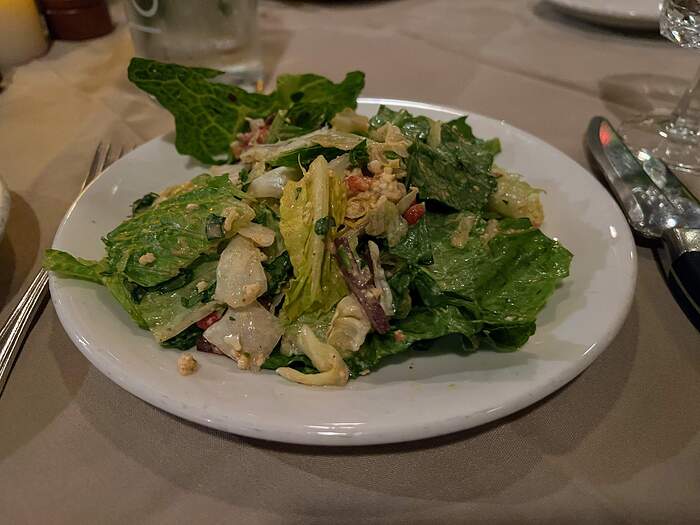 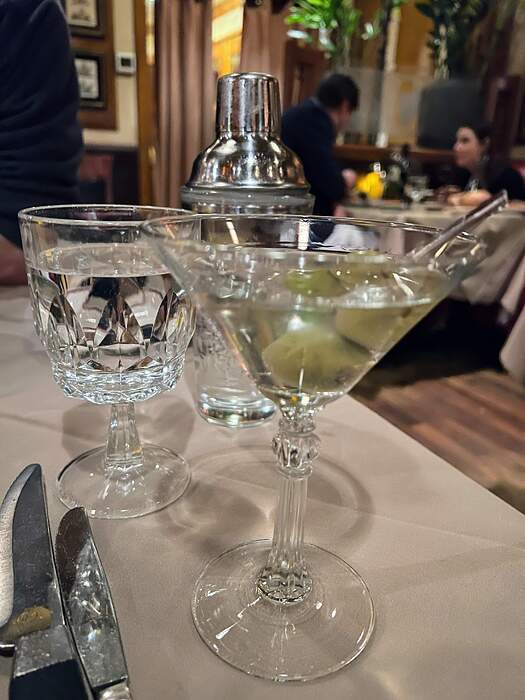 This potato was about 50% bacon and the rest sour cream and butter (slight exaggeration). 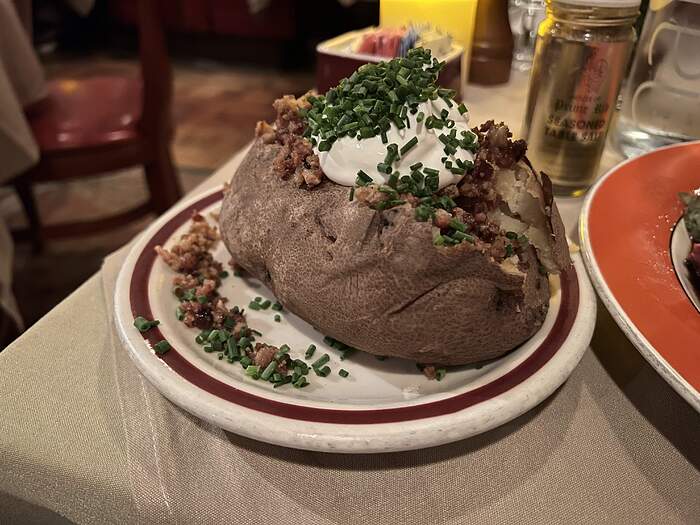 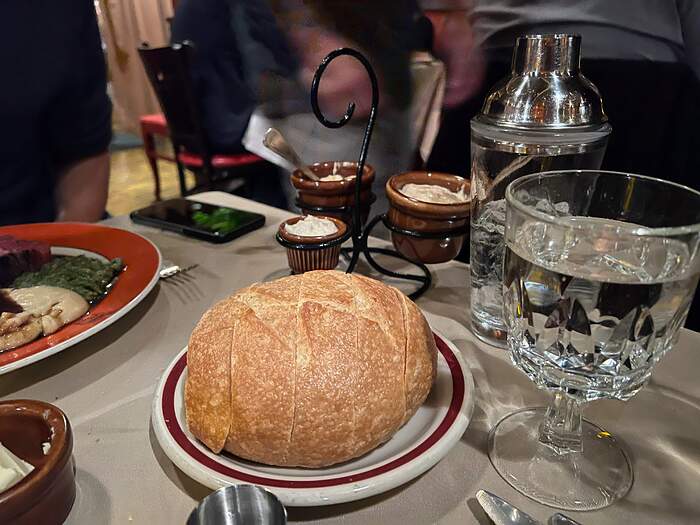 This creamed corn was kind of new to me. Very creamy with sweet corn. I found out you can get the corn and the creamed spinach half and half. 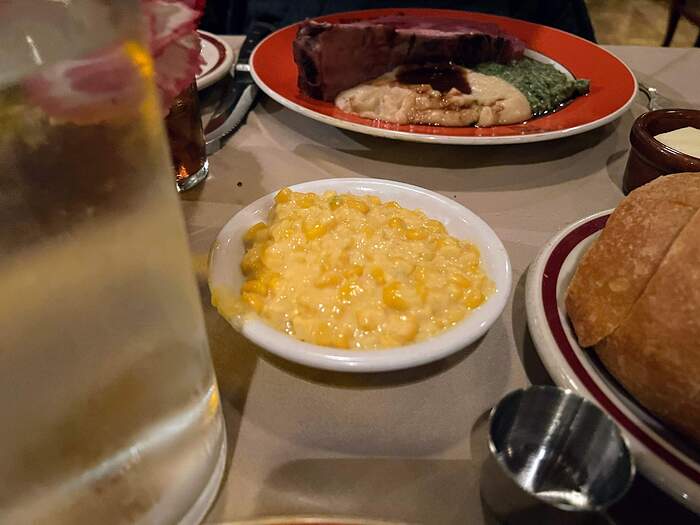 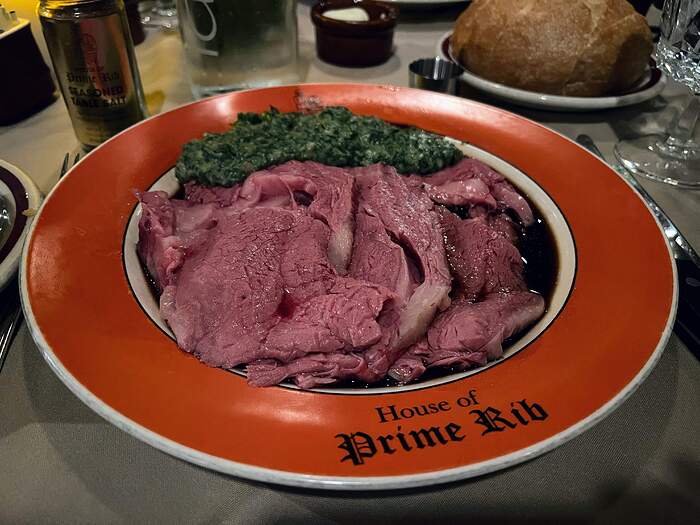 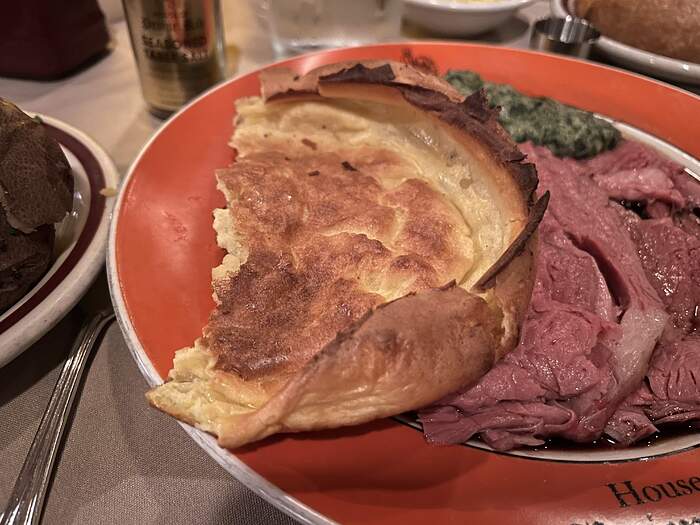 HOPR was my uncle’s favourite restaurant. We went with him a couple times, most recently in 2010, the last time we visited him, months before he passed away.

The meal looks exactly the same