My buddy grew up in Yonkers and is forever telling me about Romas as the best pizza anywhere. I think he is speaking to the one in Tuckahoe. Does anyone have experience and opinions? TIA

I had it once but take out. And my friends brought it up to Mt. Kisco so we had to reheat it. It was decent. That was 15 years ago, though!

Same here. They have been there a very long time and in the past had a great reputation for their pizza. It’s been years for me too, got sidetracked with all the other pizza joints around…

They have never been considered great. Most of the folks who go there have been doing so for multiple generations. Not for the quality, but as a family thing. I live near there now, and also when I was a kid and teen. Last went there 10 years ago. I just never got it. So many much better places in the area.

Seriously JMF … Tell that to the scores of customers who stood on a line that snaked down almost to the post office on Friday nights year after year… To get their pizza fix. The pizza was considered good!!!

When were these lines? I never saw them. Lived less than a mile away for half or more of my life. Drive through Tuckahoe every day.

Last night I happened to be texting and talking with several old friends from the area. (All lived less than a mile away from Roma’s, in Tuckahoe, Bronxville, Eastchester, or Yonkers.) Just catching up like we do every few weeks. I asked their thoughts on Roma’s. Not one said they ever saw lines or that the pizza was any good.

Spoke just now to a friend I’ve known since we were teens, whose family went there on a regular basis. From the late 60’s to around five years ago. Basically several times a week since the parents didn’t cook much. Most of the family has no taste in food. I know because I went to Roma’s several times with them, and to other mediocre places over the years. Never to one place that was really good. My old friend knows food. He was the cook for two excellent deli’s when in his early 20’s, and was always trying to talk his family into going to better places to eat. They were just caught in a food rut and ate at all the same places again and again. I totally trust his food judgement, since we ate our way around Westchester and NYC from when we got our drivers licenses, until late 20’s. He only ate with them as a family thing. His response when asked about Roma’s and if he ever saw lines there was, “Gag no! Worst pizza in NY.”

My friends have been to both the old location just down the street, and the new. Never saw any lines. Maybe there were lines for a day or two when they moved to the new, custom built location, in the 80’s?

I’m not arguing that there were no lines. Or that some people liked or even loved their pizza. But neither I, nor any of my friends from that area, ever liked the pizza, or saw or heard of lines to get in.

I lived across the street for years and never saw a line. In fact I’ve never had to wait for a table.

The current location of the restaurant opened in late
June of 1979 … There were lines out the door that snaked down
Columbus Avenue every single weekend for approximately 5- 10 years.

The hostess carried a waitlist around with her so she could take names when people entered from the front and side entrances. The line that went down the block extended in through the double doors in front and in through the side door past the bathrooms and stopped at the counter where the cappuccino machine is. There were many loyal locals and many people who traveled a respectable
distance to eat there. The servers, albeit some of them pretty horrible made mucho $$$$$$$$$$$$$$$$$$$$$$$$$$$$$$$$$$$$ that does not happen unless a restaurant is busy.

Roma, Lincoln Lounge and Johnny’s were always in the top three and vied for the top spot in Westchester for years, their pizza was legendary.
It may not be what it once was but for the life of me I can’t understand why anyone would want
to take that away from them … their good reputation was earned and deserved.
Like them or not they are still around and a Tuckahoe institution … do you want to keep going

Did you personally see these lines for 5-10 years?

And no one I know considered them good. Ever.

I grew up in a very food centric home. My dad to this day is probably the most accomplished home cook I’ve ever known. His food was amazing and the reason I don’t review high end restaurants, the bar was set too high. He was world traveled and also a scientist who was way ahead of his time in food preparation technique. I have memories of bunson burners, candy thermometers, torches, pans seasoning , trays of candied fruit being sprinkled with sugar, mousses being whipped, ducks being roasted, fish and chicken being boned, French fries and fried chicken bubbling, tomato sauces simmering, fried rice sizzling, beef Bourguignon being prepared for dinner with colleagues, skirt steak grilling, turkey and corned beef brining, cakes being baked…all with scientific precision… his scrambled eggs were extraordinary.

He knew good food…he had good taste…he ate at Roma with the family on Sunday’s whenever possible and he really enjoyed the food. It was the only restaurant in his regular rotation…there was no point in eating out because the food at home was a zillion times better.

The current location of the restaurant opened in late June of 1979 … There were lines out the door that snaked down Columbus Avenue every single weekend for approximately 5- 10 years.

The current location of the restaurant opened in late June of 1979 … There were lines out the door that snaked down Columbus Avenue every single weekend for approximately 5- 10 years.

All I can say is that I never, ever saw a line. Nor did anyone I have asked about this, yesterday and today. Also no one I know would put Roma’s in the same category as Lincoln Lounge or Johnny’s. Which I never thought were all that anyway.

We are going to have to agree to disagree JMF

Well, I never knew my question would create this…in a way it is good to hear the varied opinions. Now I HAVE TO go and taste for myself.

There is a brand new pizza restaurant that has opened in the mall on the corner of Main and Columbus.

The Original Italian Pizza and More....


The sausage and broccoli rabe pie was tasteless
I tried and liked the pesto on the pesto pizza
The only part the round vegetable pie I liked was the fresh chunks of eggplant that were scattered around, the crust was dreadful
The meats on the white pie were good
I didn’t find any of the pizza to be particularly special … they definitely need some time to get it together, and I think it was smart of them to hold off until September to have their grand opening.
If I hadn’t know before hand that the oven was wood fired I would never have known the pizza came out of a wood fired oven … also the kid working the counter, the one with the Captian Marvel tattoo on his elbow, needs some kind of professional training and a valium 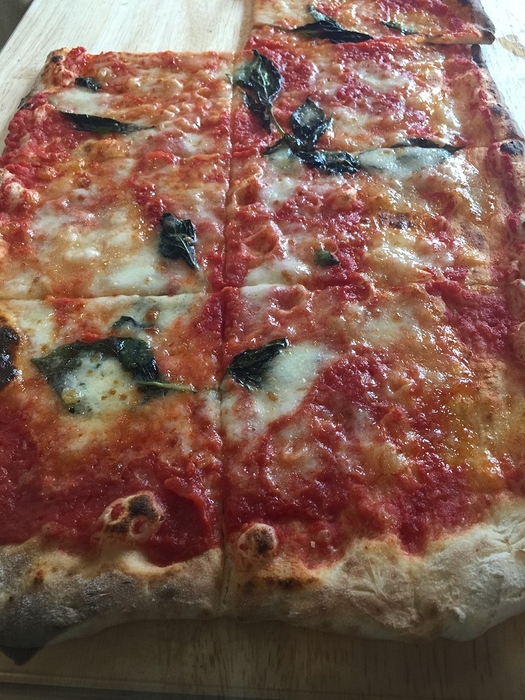 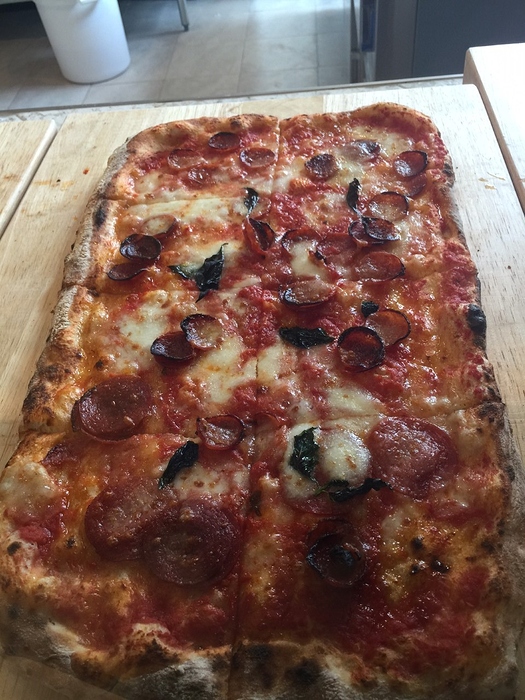 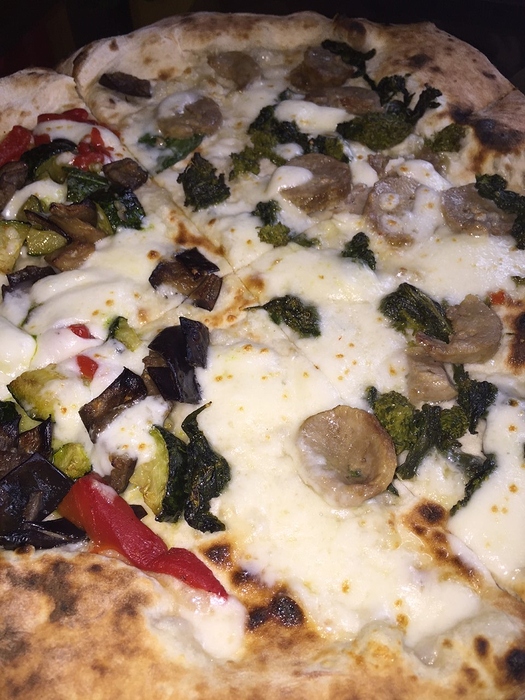 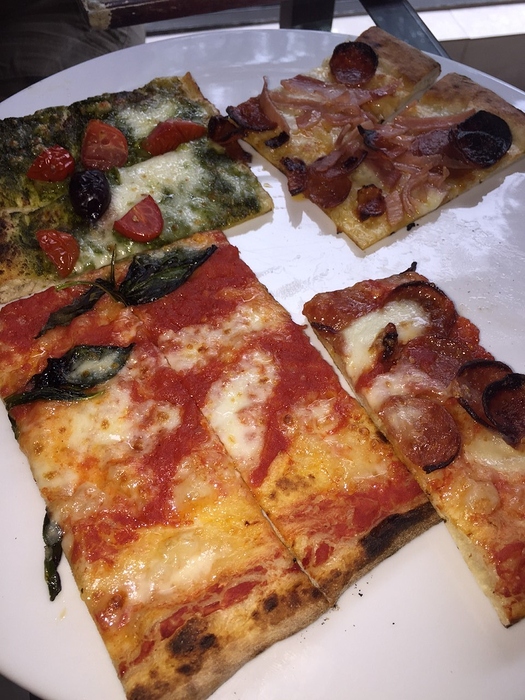 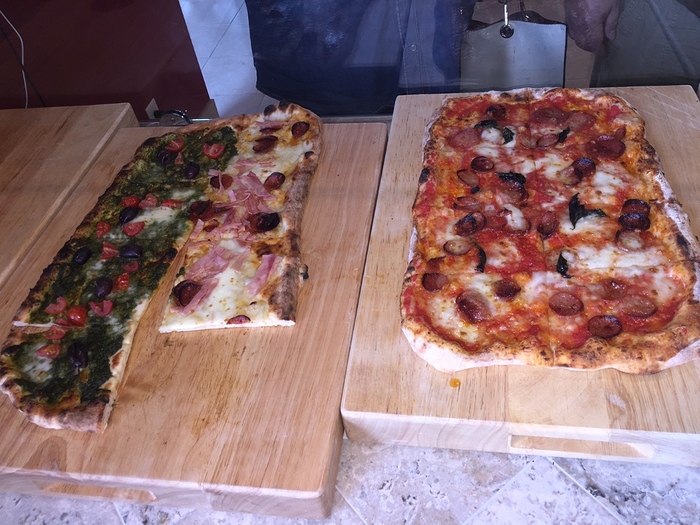 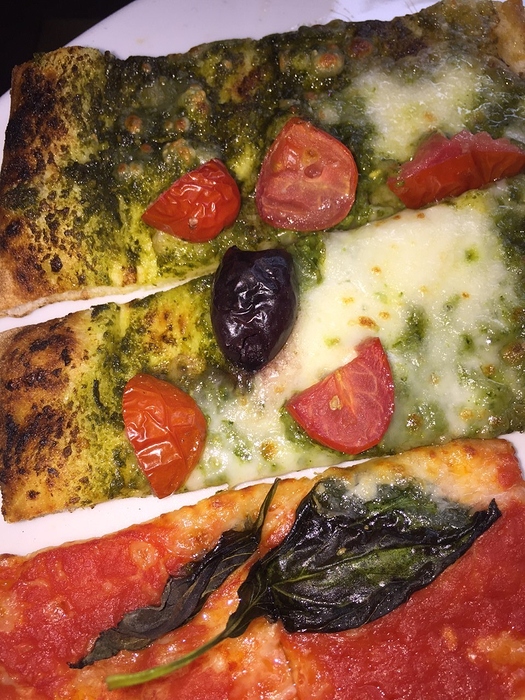 this pizza does not look good

It really wasn’t … but they are brand spanking new and seriously clueless.
I wish them well and hope they get it together.

jfood to be clear I was taking issue with how the pizza was many years ago
The current product is not the same. And IMO the food was only good at the
original location … which was years and years ago