Roasting pig in the yard

A companion topic to the yard cooking pit topic. I have thought about roasting a suckling pig in the yard. Obviously that is a bit more involved than dishes like paella in the other topic. I found some info on the web: 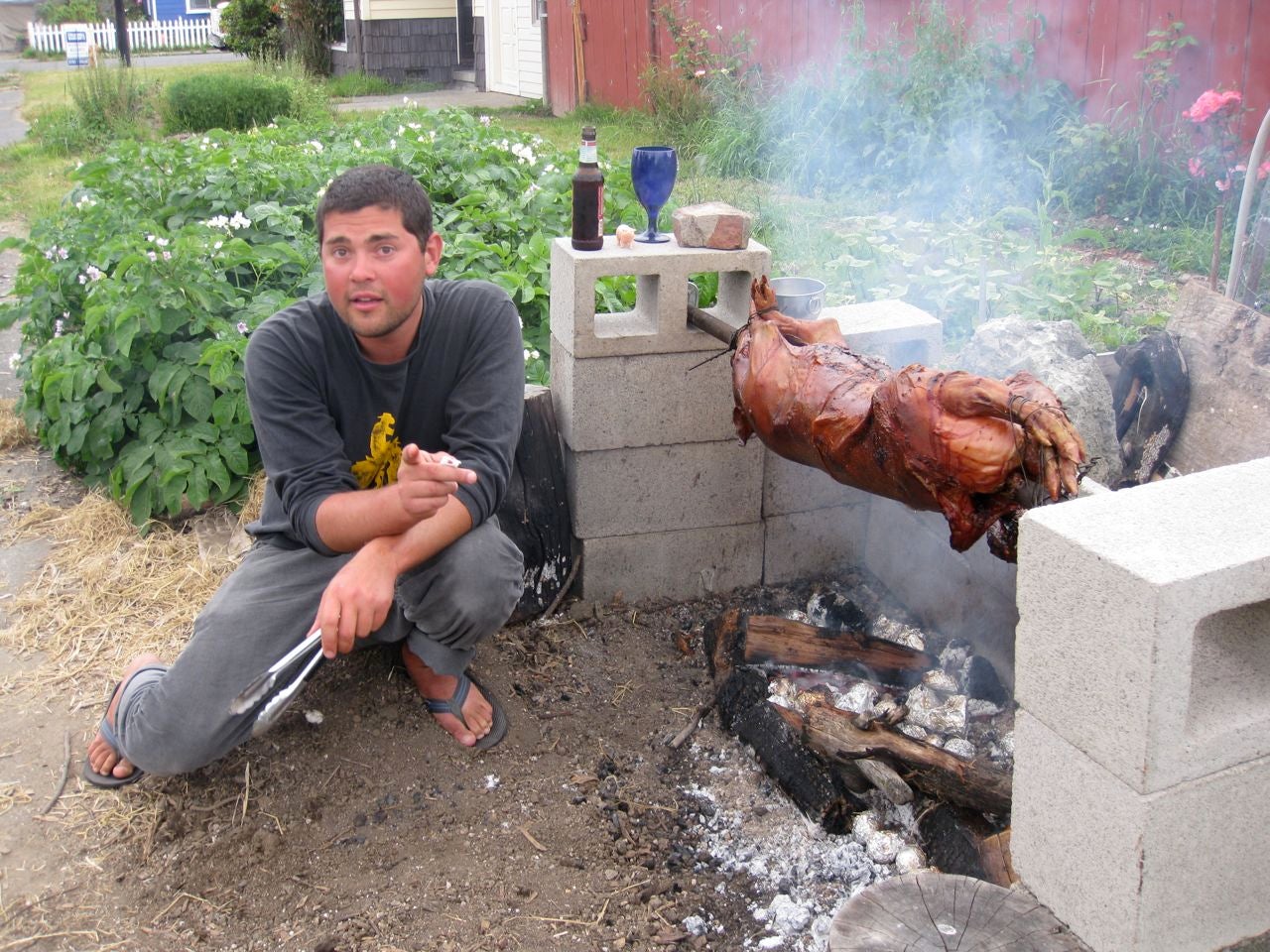 How to Roast a Pig

Having a pig roast is hands down one of my favorite things to do.  There are few other edible, legal party activities that put everyone in a good mood and garner as...

Pig Roasting 101: How to Cook a Whole Pig

Celebrate Independence Day (and a successful hog hunt) with a backyard feast. If there’s ever a time to go whole hog—in every sense—it’s Uncle Sam’s birthday. Cooking a whole pig (in this case, a 75- to 125-pounder, butterflied and with hair removed)...

Given the amount of work involved, can anyone share their experience in this prep? Worth it? Pitfalls? What to watch out for? Neighborly issues?

Actually it looks pretty simple. Just moderate heavy lifting to get it put together. But over all it’s a very old method for roasting meat. Old because it works

sck , Awesome that your even thinking about it . This will give you more inspiration .

30 plus yrs ago I worked with a bunch of guys ( NJ Piney’s) who regularly roasted pigs they stole from local farmers.

They had a big slow turning rotisserie with an electric motor that used a fan belt to turn the pig. They called it a spit.

They dug a hole about a foot deep and would fill it with wood and start the burn around 4pm. By 10 pm, a trash can was filled with empty cheap beer cans and the hole was filled with a foot thick bed of hot coals. They then dragged the spit with the pig chicken wired to it over the hot coals and as it spinned all night and we continued to drink.

We picked up a few winks in the wee morning hrs and by noon when the tip of a knife blade inserted to the femur bone was hot to the touch it was done.

Later in the day they filled another hole with water and the mud wrestling was under way. Sunday morning eventually arrived and you called somebody to come get you. Once home you slept until Mon morning.

May be able to rent a spit and not have to deal with all the cinderblocks and such.

I have a cousin who did that in Georgia and got kicked out of a private college with a lot of students who had a history of a mischievous behavior.

don’t dig holes in your yard – get one of these: http://www.lacajachina.com/

That’s how families of Cuban descent do lechon asado here in Florida – marinate that bad beast in some homemade mojo and let it roast. (then just get out of my way or I’ll have to knock you down).

How does this cart work? You put the pig on the grill? do you have to turn the pig? Maybe a suckling can fit into a 18 lb model…

got kicked out from roasting a pig??

For the technique, sounds like its lower heat roasting from the hot coals over a longer period of time? wondering how it compares to the e.g. 5 hour roasting? More tender?

No, the pig goes under the coals.

Say you're from Iowa. Your sister lives in South Florida, she's married to a Cuban, and you're taking the opportunity to get out of the snow and party in Miami at his family's house this Christmas.You show up in socks and sandals, cargo shorts, and a...

There are lots of videos, too.

Worth it? Hell yeah. Can millions of Hawai’ians be wrong? Google “Hawaiian imu”…

Don’t forget the hot rocks in the pig’s body cavity!

No, for shooting a farmers pig and dragging it off to roast it. He wasn’t alone in the activity and most of the students and teachers had a good time at the pig roast.

Worth it? Hell yeah. Can millions of Hawai’ians be wrong? Google “Hawaiian imu”…

Don’t forget the hot rocks in the pig’s body cavity!

Why in the cavity? to make the roasting more even?

No, the pig goes under the coals.

Interesting. I watched a video of the box- It seems like the mechanism is fairly similar to an oven. What’s the rationale for the goals on top design? No need for rotation?

Essentially the caja china is an outdoor oven

the rationale is that it’s just so freaking good. Better than an oven.

Its hard to say. This was before pork was leaned out to become, “The other white meat”. These were full size well marbled small farm raised pigs with a very thick layer of surface fat to keep in the moisture. Nice strong/rich pork flavor, tender & loads of juice. They also didn’t overcook it like so many people did with pork back then.

In recent years most of the roasted pork I have had was catered. Small pig, lean, somewhat bland flavor and more often on the dry side.

Overall I have found low slow roasting (250 degrees or less) results in far less moisture loss, to the point where there is very little drippings in the pan for making gravy.

The guys I worked with used to supplement their construction income by stealing livestock. They used to grab pigs & steer by the center of the nose with channel lock pliers and walk them into a trailer. They said it worked like a charm as long as the pliers didn’t slip off their noses.

More even and faster. Hungry 300+ pound Hawai’ians don’t like to wait. As we say, “No try, Brah. Moke 'wop yo jaw. Wikiwiki onda pua’a kalua!”