Correct it was founded around the same time as HO. They were far more West Coast/Cali centered, where we had a broader base so that’s how I wound up here vs there.

Felt that their SoCal posts were really good but other areas of the country can be lighter.

I thought it was just me since I told one of the mods on there to bugger off.

I’m saving one of my earliest posts from one of my my favorite and long running Seinfeld threads. It looks like I posted on it a few times over the years. 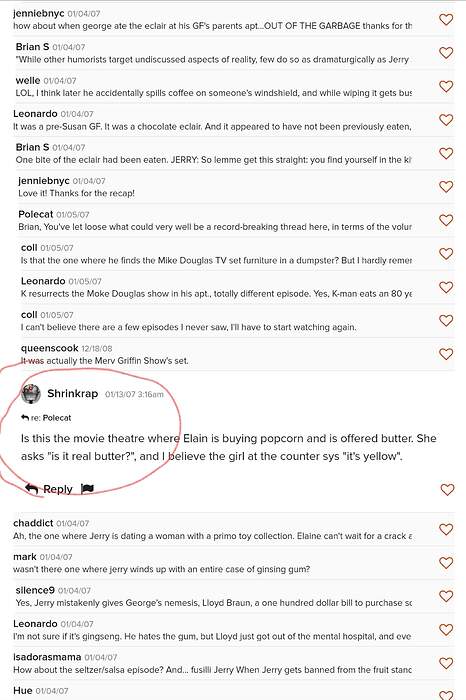 Was there a thread for favorite Chowhound threads, or maybe recipes? I just rescued a really long one about macaroni and cheese and wondered if there was a place to share it.

2 posts were merged into an existing topic: Chowhound archive and most memorable posts

Awesome article in the Boston Globe this morning We Are All Chowhounds Now.

I can transcribe it later because it may behind a paywall for some people who are interested in reading it. Several well-known Boston hounds are named in the article which is a lot of fun to see.

As an aside, by some weird coincidence late last night, when I should’ve been sleeping, I was combing the Chowhound archives and came across an epic meal at a local Korean restaurant written up by Chowhound @Nab who is mentioned in the Globe article. I hadn’t thought about nab in years and then I see his name in print this morning. Weird and wonderful start to my day - nab is awesome! I only wish he and another favorite Hound, Joanie, would join us here.

I too have been going through old posts to see what I can dig up. I am amazed by the memories and half-memories of somethings almost completely forgotten. So many great folks, many of whom have migrated to HO. Like the great western migration (or if you’re in China, the eastern migration), though maybe not quite as epic.

Awesome article in the Boston Globe this morning

Thanks for sharing. FYI, I was able to read it without a payroll by googling for it rather than using your link, so that may be another route for anyone else who wants to read it.

Awesome article in the Boston Globe this morning We Are All Chowhounds Now .

That was an awesome article @digga, Devra at her finest, thanks for posting. Love the confirmation that she and other mainstream food writers lurked there in the early days, as we always suspected. And so nice to see those Boston Hounds’ instantly-recognizable names.

Useful idea. Googling We Are All Chowhounds Now could be the way to go (as long as someone hasn’t reached their limit of free articles from The Boston Globe).

@digga, this is such a great read, thanks! For me it’s the very best piece I read on the topic. Best to avoid extra work and copyright issues by not transcribing the whole article, said one of your HO pals who has your back. Wonder who that could be.

I love that Devra went all the way back in the Wayback Machine to pull the CH Manifesto as a “starter reference”. And kudos to the Boston regulars who were mentioned…I had forgotten several of the Boston CH names until she mentioned them.

Best to avoid extra work and copyright issues by not transcribing the whole article, said one of your HO pals who has your back. Wonder who that could be.

Clear your cache, and you should be able to read the article as a “freebie”. I’ve done that on occasion.

I asked this question over on the archive thread - in case anyone here is interested:

@MelMM @sallyt @LulusMom1 @Nannybakes @MidwesternerTT @mig and others (please reply & tag in folks) – I just experimented with using the wayback machine for batch processing a few “favorites” threads and it worked reasonably well so I’m trying to do some more. Perhaps we could consolidate efforts (in these last few days) to archive threads we think should be preserved (or have bookmarked ourselves) – for me there were several collection threads that were great (COTM repeats, favorites of the y…

A chowhound poster I always read was “mamachef”. Her tales of being a cook for a college fraternity (or was it a boarding school?) were great.

I liked her posts as well. I think she was widowed unexpectedly and stopped posting after that, which is sad.

Ah, I thought it was med issues of her own, Was bummed when she stopped.

I loved mamachef (yes, it was a frat for which she cooked). I especially recall her sad cafe thread; but she was so helpful and kind on a myriad of topics. She and I exchanged e-mails for a while, but it sadly wound down. She made a brief appearance on HO using a different screen name.

I know she lost a son and suffered a fire. I wasn’t aware she had been widowed as well. I wonder if I should try reaching out to her after all these years?