So yesterday I had a manufacturer stop in and they bought my team lunch. I order a “large” meatball calzone and this beast shows up lol. It’s a rockafellers masterpiece made in long branch. Rico serves up some tasty food and is an awesome guy. I recommend his spot. This thing was 11 bucks and it’s so big it’s residing in my garage right now.

So what types of over the top food am I missing? I’ll report back with a few but this calzone got me thinking…

What are you favorites …

I lived in northern New Jersey for a couple of years and the most amazing thing I ever tasted in NJ was, one summer , as I was driving off the interstate through the southern half of the state, I spotted a roadside fruit seller, so I pulled over and bought a pint of blueberries. Driving away in the car, I popped a few into my mouth, and they were so delicious, I turned the car around and bought a few more pints. This was near (of course) Hammonton, NJ. To this day they are the best blueberries I have ever tasted in my life. If I lived anywhere near NJ, I would go back to that fruit seller every summer. 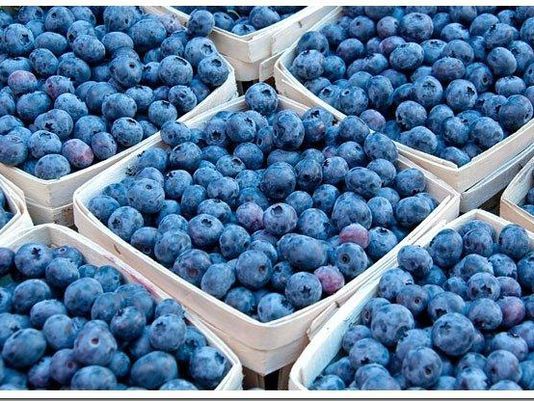 My entry is for the category of insanely spicy from Danny Bowien’s Mission Chinese in NY (but you can have 'em in NJ by using the link below to cook 'em yourself.) 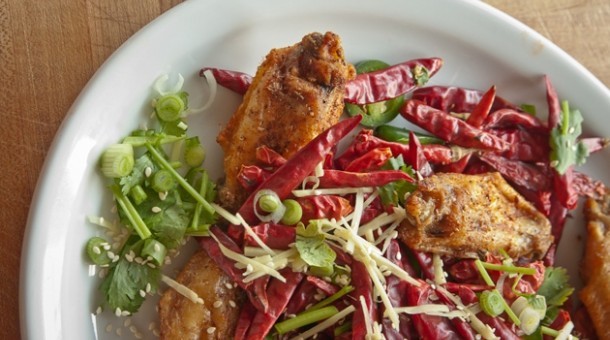 Ht…if you haven’t been to maine they have amazing blueberry “culture” since it goes far past food. They use the fruit in all types of delights…wine, beer, waffles, syrup, pancakes…you name it.

I’m getting the popcorn ready for joons votes

This one could go under rare, unique, and/or exotic. At Eleven Madison Park, the summer menu included a dish made from sunflowers. Ridiculously delicious! 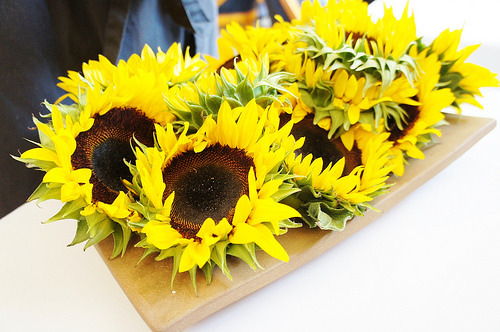 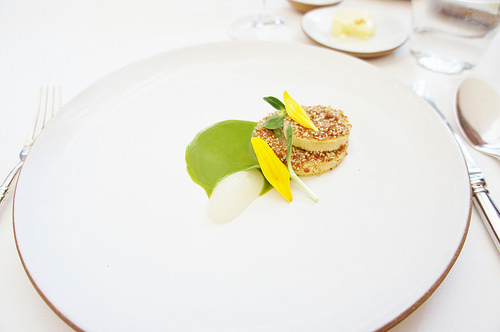 Back in the days when I was still young, wealthy, and living out in the big, bad world, we used to come up for brief, booze-fueled getaways. On a few occasions, my best friend from law school would tag along. Phat Dave, as he was affectionately known, was a six foot five, near-three hundred pound former UWV offensive guard turned K-Street lobbyist, who used to grow legendary weed. Old Dave, as you might imagine, had an amazing appetite - so bottomless, in fact, that he and I were actually once asked to leave a Baltimore, “all you can eat sushi” joint, after being scolded, “No, no, you eat enough. No more. No more.”

Well, with a guy like that, you tend to steer your dining out choices towards spots that offered up the monster fare. Consequently, we eventually assembled a list of bigger-than-the-average-bear favorites. Among those that still stand out would be:

Moreover, there were two offerings in Belmar that I’m not sure are still available. The old McCann’s (as opposed to the mostly filth-free incarnation of the restaurant that is still there) used to offer a half-pound, cooked-behind-the-bar burger. For an extra three-fifty, they’d double it up for you and serve if on half a toasted sub roll. Additionally, there was a place called Three Brothers pizza (I think) that would deliver a twenty-four inch pie until two in the morning (three in July & August).

It’s bittersweet, to think back on it now. At the time, Dave dubbed the area, The Land of Big Foods. Although my buddy passed away a few years ago, the name he awarded, reinforced then through the re-tellings of our ludicrous escapades, actually kinda stuck. Well, at least stuck enough that I’ll still occasionally be asked by others, “So, how’s life treating you in The Land of Big Foods?” 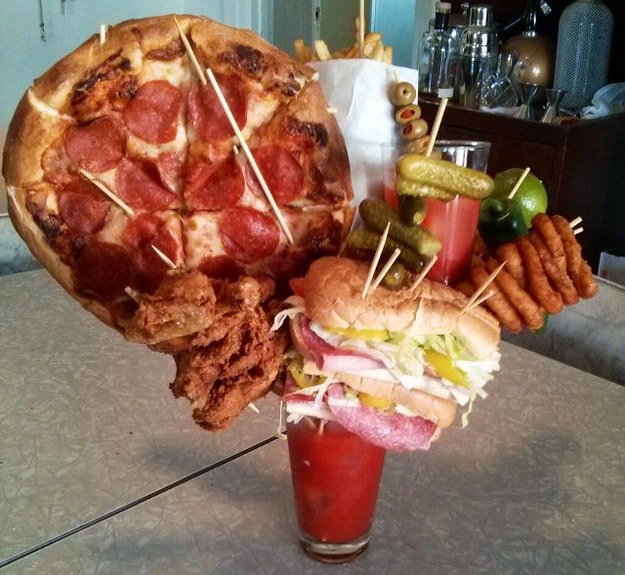 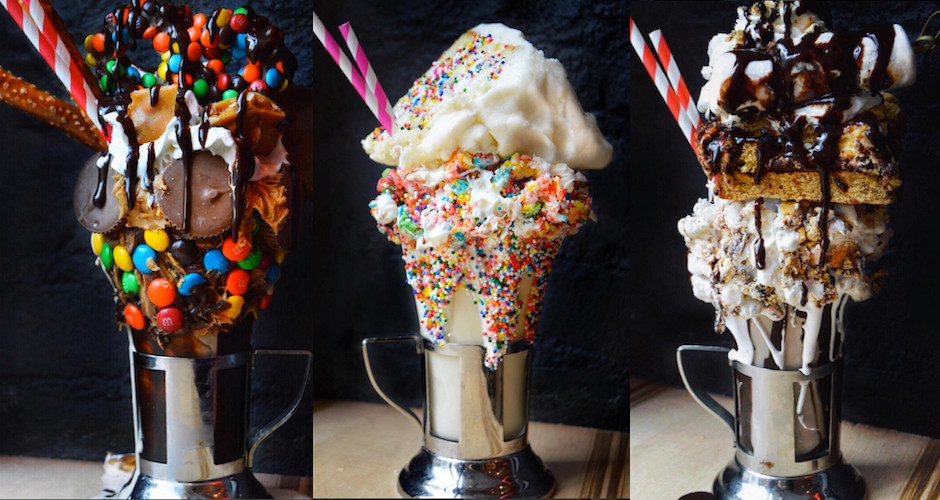 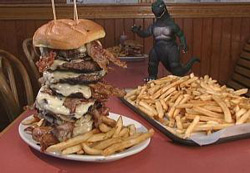 Hopefully this is a temporarily useless post now that Chef MD has left Redemption, but I thought the sundae there was completely insane, and in the best way possible.

While I don’t remember everything (and @seal can probably chime in with the list of ingredients, which did involve bacon), I can tell you that when I read the list, my first comment was it was way too much and too sweet for me…but I was wrong. Mrs. Seal and I barely let Seal get his spoon in the bowl!

Does any food remotely near NJ or eaten by someone who knows where NJ is on a map apply?

@mz Always a pleasure to read your posts z man. I lost an awesome buddy too. Instead of 6 5 he was 5 5". He was like a white ceelo. I have to dig up a pic but I have a shot of him tanking 13 lobsters at the quay. Yes 13. The dishes of shells were impressive. He proceeds to spill a cup of butter on himself and didn’t miss a beat. He then gets on his chopper, covered in lobster shrapnel, and rides off into the sunset like nothing happened. That was a memorable experience. Man I miss him.

@hotoynoodle wow where were those taken?

Maybe Jr can chime in with his Vegas lobster story. That is a classic!

@RGR I’ve never seen anything like that. Can you tell me more?

He then gets on his chopper, covered in lobster shrapnel, and rides off into the sunset like nothing happened.

How bout the “Fat Drunk Guy” sandwich from Nelly’s in Long Branch? It includes:

I remember seeing that. Shoulda tried it.

Another one:
The Committed Pig, in Manasquan, has their 20 dollar burger (menu price $19). It’s a full pound of meat.

That lobster tale reminds me of a dinner buffet somewhere up north, maybe The Manor or Snuffys, that back in the day used to include lobsters. I recall going through a few bugs one night as a child, to the delight of the grown ups at our table - as well as those around us.

Anybody know better which place that was?

@corvette_johnny, Re: the sunflower dish. It’s the center part of the flower. After it’s cut out, they do some culinary hocus-pocus to get it to what you see on the plate. Flavor-wise, it reminded me of artichoke. We were told it took the chef and his team two years of experimentation before he felt it was ready to be put on the menu.

@MZ, The Manor still offers it.

Here’s my story about The Manor. In 1978, for our 10th anniversary, we chose it for our celebration dinner. We’d never been there before and in those days, a place like that was special occasion dining for us. When we arrived, we were told they had no reservation in our name, and since they were fully booked, they could not accommodate us. Angry and upset, we got back into our car. We were 45 minutes from our house in an area with which, unfortunately, we were totally unfamiliar. So, we hadn’t a clue about an alternative restaurant (and no iPhones back then to bail us out). We drove around for a long time before finally ending up at a Chinese restaurant.

Thanks @RGR. I’m thinking my memory of that place likely dates to the Carter years as well. Not to mention the memory of the visit being "special occasion-y enough to warrant my having to wear one of Dad’s ties.

Joon have you had it? I have had a few there…not bad. This one looks like a beast.

How did we leave off harolds? That place is the definition of gluttony. If anyone is not familiar, check it out online.

This is my plate AFTER I tanked 3 decent sized pastrami sandwiches. I took this home… 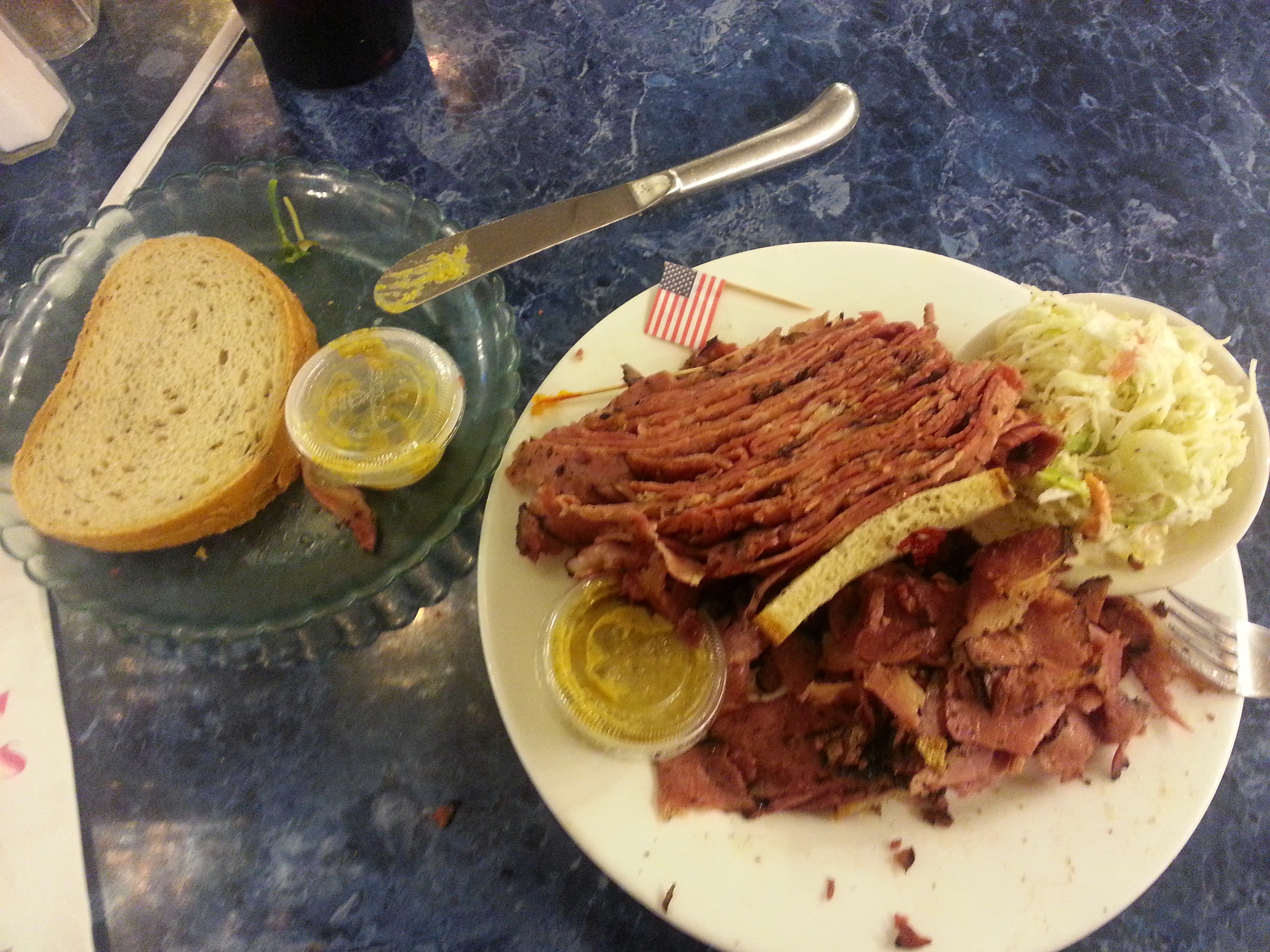