Hello all. I think I’d like to make a rhubarb baked thing for the guests on Wed night. What are your favorite recipes? Could be a cake, cobbler, or crisp. My only 2 “rules” are (1) easy and (2) uses a lot of fruit. Thanks! 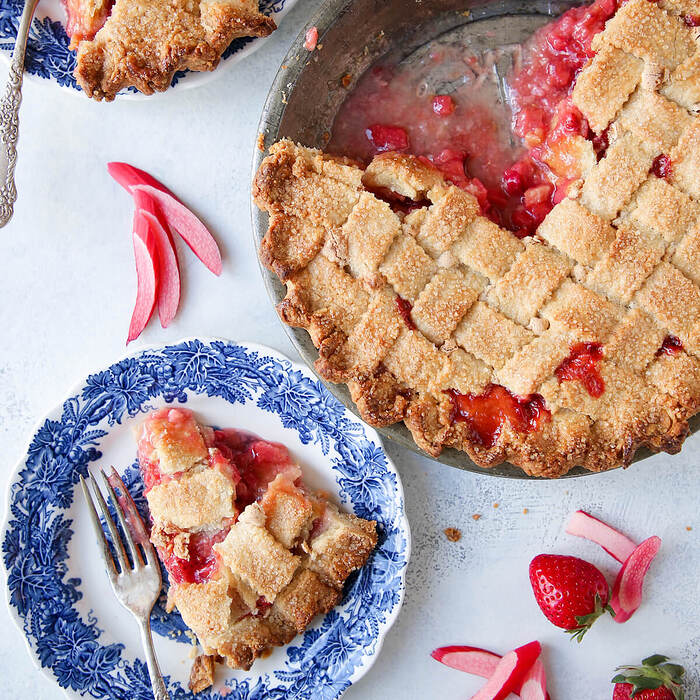 This heritage Strawberry Rhubarb Pie is sweet, juicy and incredibly refreshing. When paired with the almond pie crust it is perfection! 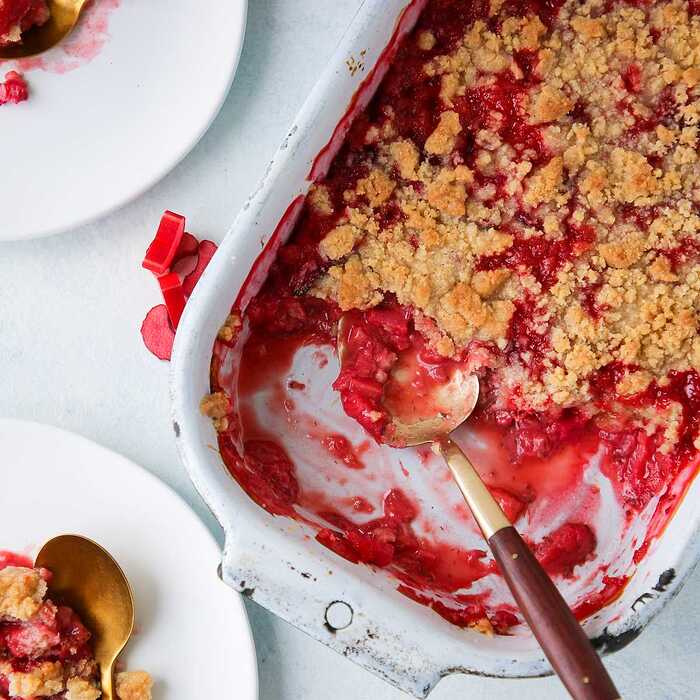 This Strawberry Rhubarb Crumble highlights the tartness of rhubarb and the sweetness of strawberries with lemon juice and zest.

Thank you! Tday has a pumpkin pie and apple free form tart (basically a pie for those who are dough handling novices like me), so a non-pie appeals more for the rhubarb.

When we get the first of the forced rhubarb in the early weeks of the year, there’s probably nothing better than turning it into a simple compote. Chill and serve with hot custard. Not baked, of course

And this isn’t baked either. When the maincrop comes in during early summer, it’s rhubarb fool in this house. 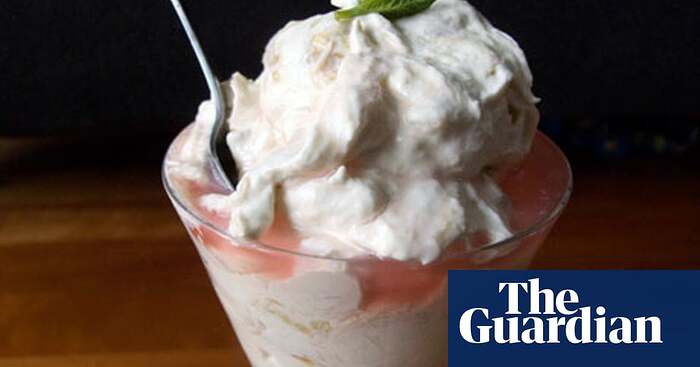 How to make perfect rhubarb fool

This is arguably the finest British summer dessert. Are you a custard fool, a cream fool, or some other kind of fool entirely?

And then , in late summer when it’s the last of the season, nothing better than a crumble (also with custard). Something like this although, of course, everyone probably has their own favourite crumble method. 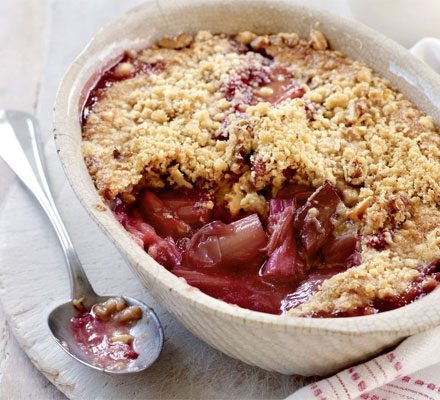 Make this classic rhubarb crumble for an easy, family-friendly dessert. Use seasonal rhubarb and a handful of ingredients to make a stunning pud.

Everybody defaults to strawberry as the fruit to go with rhubarb, even though the pairing is a misunderstanding: the red-skinned rhubarb variety is called strawberry rhubarb, and is no different in flavor or ripeness than green rhubarb. I can’t think of a pie/crumble fruit that DOESN’T play nicely with rhubarb. In fact, the best pie I have ever had was a rhubarb orange streusel-topped pie.

Google the Rhubarb Compendium for scores of ideas and recipes.

Yup! I have made Lindsey’s crumble with honeycrisp apples, tree ripened peaches, and pineapple/mango and all were great.

I wasn’t going to pair rhubarb with another fruit. I love rhubarb as is.

You mentioned “a lot of fruit” in your OP. I don’t consider rhubarb a fruit, nor does anyone else I know.

Technically of course you’re right that it is a vegetable. But it’s a vegetable in the same way a tomato is a fruit. The vast majority of rhubarb recipes I know of are sweet. The vast majority of tomato recipes I know of are savory. Not to say there aren’t exceptions. But when I indicated a lot of fruit, I simply meant I wanted a recipe that was rhubarb forward. Not something with 3 cups of batter and 1/2 cup of rhubarb. Sorry for the misundertanding.

I consider it a fruit because I grow it in the garden, and it goes into dessert, mostly.

I’ve also made some main courses that use rhubarb, and ordered salads that contain rhubarb.

IIRC, Lindsey specifically states in her crumble recipe you can use only rhubarb. Give it a try… I have found her stuff to be 100% (which is rare to me regarding online recipes).

I have made this dessert a few times

Most of our rhubarb gets made into crumble , or compote.

I often chop rhubarb, add some sugar, lemon juice and tapioca, and bake it in a Pyrex dish at 350 for 30 or 40 minutes. We eat it like a pudding or apple sauce.

Could make rhubarb chutney, too. 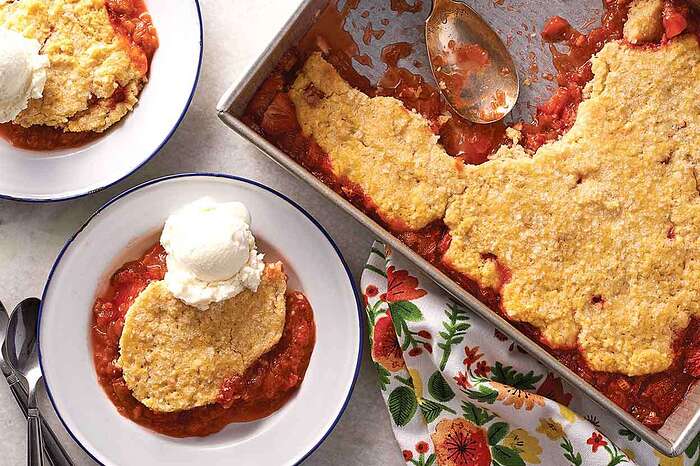 Tart, sweet, shiny spring flavors of rhubarb and strawberries, under a tender-crisp crust. 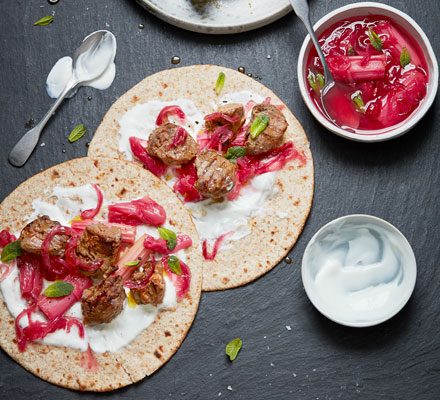 These Russian kebabs are made with succulent lamb and a vibrant rhubarb sauce. They make an ideal sharing platter for a spring dinner with friends

I consider it a fruit

You’re welcome to considerate it anyway you like, but when you post a question about using a vegetable in a recipe calling for “a lot of fruit”, you’re asking for something you’re not looking for.

You didn’t appear to misunderstand my question, and I don’t think others will either. So why the English lesson? Would you similarly point out to people on these boards that tomatoes, eggplant, cucumbers, and peppers are all fruit when they go looking for vegetable recipes? It just seems like you are trying to make a point and I don’t understand the purpose.

My initial reply (and the first to your OP) offered up what you asked for… a rhubarb recipe with “a lot of fruit”… which included two recipes with rhubarb and a lot of strawberries (fruit). So AFAIAC, what you were looking for was not clear to me, nor did it seem so to @greygarious

If you like, I will be happy to ignore your posts going forward if you have issues with my replies.

I don’t consider rhubarb a fruit, nor does anyone else I know.

We don’t know each other but, if we did, you’d know one person who considers it to be a fruit.

I suppose, also, the folk who design the layouts of British supermarkets also do, as it is always placed amongst other fruits.

I appreciated your links to all the recipes, and less so the pedantic way in which you are correcting me and other posters as to the appropriate way to speak about rhubarb. Thank you for the recipes. I will take a look at them all. The idea of biscuits with compote and cream popped into my head too, based on a compote suggestion above. So that’s a contender now as well.

Obviously no one wants to hear from anyone they consider a pedant, so I will bow out from any of your future posts. My apologies for my reality being different than yours.

This is one of my favorite rhubarb recipes. I’m sure I put way more than a pound of rhubarb in when I made it.

I’m partial to a rhubarb compote. Mr Autumm is not a fan of rhubarb so I can spoon it over baked goods or eat it by the spoonful. My kiddos love it on yogurt