I don’t have a bundt pan. Do you have to make it in one? I’m guessing by your avatar that it isn’t a problem at your house

Interesting thread. I for one never knew until now that rhubarb was a vegetable. And I wonder if anyone in my family (growing up) ever thought of it as anything other than fruit. All we ever made was rhubarb pie. One time my mother put a few sliced strawberries in along with sliced banana. Both unusual additions for her. Best pie ever.

My husband’s friend gifted us with ‘green’ rhubarb and asked if I would make a pie. I had never heard of green rhubarb before so threw strawberries in for color. Rhubarb should be red imo. The green just didn’t cut it.

Red rhubarb has pigment only in its outermost layer, and that pigment pales with cooking. Plain cooked/baked rhubarb is pretty much the color of cinnamon applesauce. Also, the red provides no added flavor.

I add lemon juice to the rhubarb before cooking or baking with it, and it keeps a brighter red colour.

Some varieties are much more red than others. I grow 2 varieties.

Bundt cakes can be baked in a 9x13" pan, but for less time. Bake at 350°, start checking for doneness at 30 minutes. How much rhubarb you add will affect baking time but probably not more than 45 minutes. I would spread the chopped, sweetened raw rhubarb over the batter to keep it from sinking all the way to the bottom.

I could be wrong, but I think the same rhubarb plant can produce both reddish and greenish stems. I’ve had both and never tasted a difference. I find all of it delightful.

I love rhubarb in any application - I make a maple-rhubarb braised chicken dish that is to die for. However, as a dessert I have a couple of faves - first is rhubarb sour cream pie: https://www.allrecipes.com/recipe/72776/rhubarb-sour-cream-pie/

I don’t use the streusel from the linked recipe, just the filling. I top with my own almond streusel recipe.

My other favorite is a layered parfait of rhubarb compote, rhubarb curd, and homemade ricotta. No recipe because I wing it when I make it!

I know there’s no difference in flavor. I just don’t care for the looks of green rhubarb pie.

You’d want to bake it in 2 loaf pans in that case.

Oh, and there’s this, which I desperately wanted to make this summer, but never got around to.

They both sound delicious. If you’ve seen some of my other posts, you’ll know my husband doesn’t eat either sour cream or ricotta

So that’ll be a treat maybe I make for myself sometime, in a smaller proportion. I’ll bookmark them.

Oh bummer! You might be able to get away with the pie - the sour cream basically just turns into custard once it’s mixed with the flour and egg and baked. Just tell him it’s tangy pastry cream!

For using lots of fruit, I’d go with a crisp or cobbler. Cakes made with rhubarb are delicious, but don’t tend do use as much. Claudia Fleming’s recipes for anything with fruit rarely disappoint:

Technically a vegetable but treated as a fruit, rhubarb is a godsend for winter-weary pastry chefs. Claudia Fleming of Gramercy Tavern shares her recipe for rhubarb cobbler.

Here are her shortcakes with rhubarb: 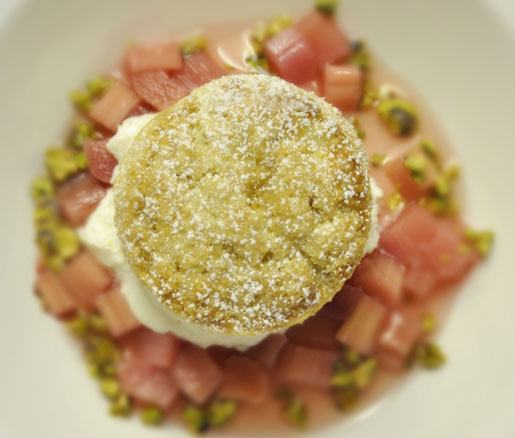 If you’d prefer something that’s not a pie, I recommend some type of custard with roasted rhubarb or rhubarb compote. It could even be ice cream served with it. As someone who is happy to just go to town on a container of rhubarb compote, I always enjoy this type of dessert. Add a crunchy element like a streusel and you have a very simple but delicious treat that looks beautiful, too.
I also like the idea of rhubarb fool suggested above for its simplicity and ease.

ETA: you could however make a layer cake with rhubarb and whipped cream as a filling. That tends to use a lot and keeps the rhubarb looking particularly beautiful, too.

This is delicious. Well worth having a jar in your cupboard if it’s sold wherever you are in the world. 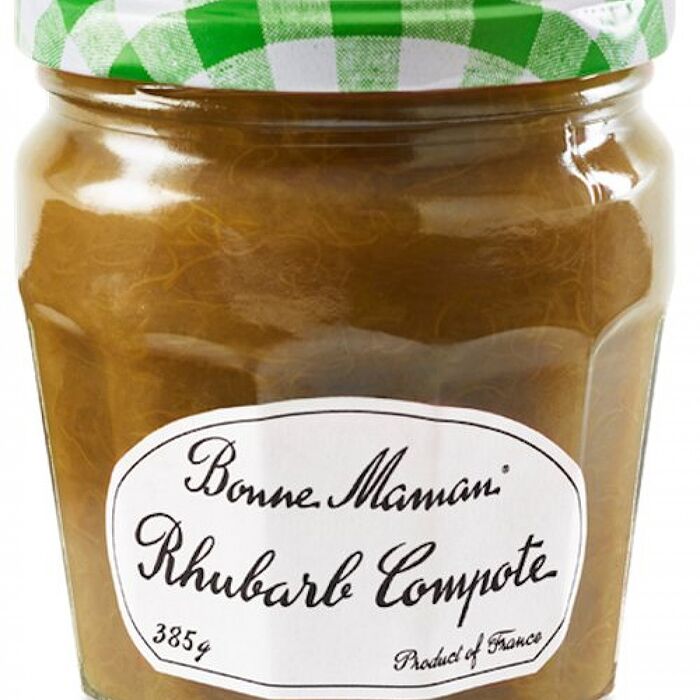 A staple in most French kitchens, Bonne Maman Compotes are an easy way to enjoy a delicious burst of natural summer fruit flavour all year round. Bursting with chunks of subtly tart, yet sweet rhubarb, compotes are extremely versatile in the kitchen....

Their apricot compote is very good as well

This is a cake and tart hybrid from a channel I like. It’s so beautiful I had to share: If you have red/pink rhubarb, upside down cake is beautiful and can use up a pound. Haven’t made this one myself: 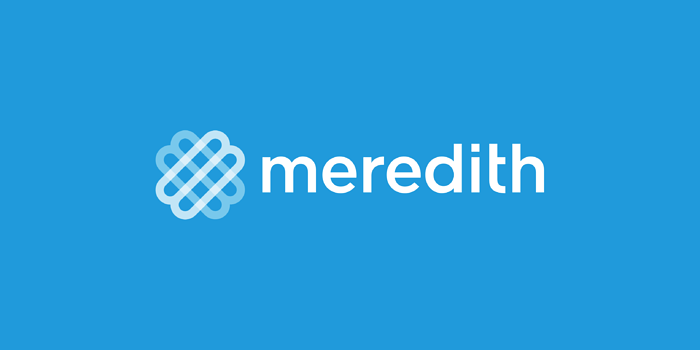 This cake has a crumb "topping" that actually ends up on the bottom. Each bite has a surprisingly crunchy texture.

Lordy, another thing he won’t eat. He has a thing about cooked or processed dairy stuff. Now that I line up all his flaws, I may as well ask for a divorce

I think for this week I will do a crisp with some type of crumb topping, and serve with vanilla ice cream. But all the other ideas are getting stored, since I have a LOT of rhubarb in my freezer. Thank you!

I made that Martha one. It didn’t keep the red color sufficiently for my liking.

I’d never cooked or baked with rhubarb until I got some in a produce box last year. I made the bluebarb (blueberry-rhubarb) crumble pie in Midwest Made - I bet it could easily be turned into a crisp/crumble. The lime zest in the crumble topping really made the blueberries and rhubarb “pop.” (Unfortunately I can’t find the recipe online, but it’s indexed in EYB.)

I buy Trader Joe’s Just the Clusters (cereal minus the cornflakes) in vanilla almond and maple pecan varieties, to stir into yogurt and to use in baking. The slightly sweet oat nut clusters are good shortcuts for crumb topping/streusel. Now and then, but rarely, I’ll have a bowl as the cold cereal it’s meant to be.