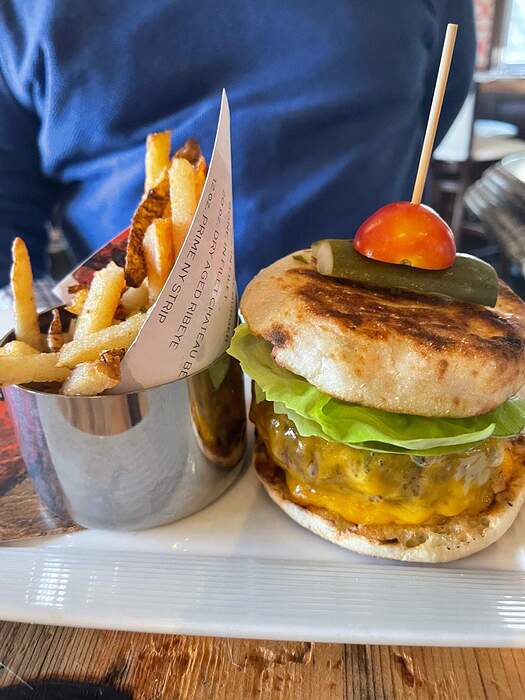 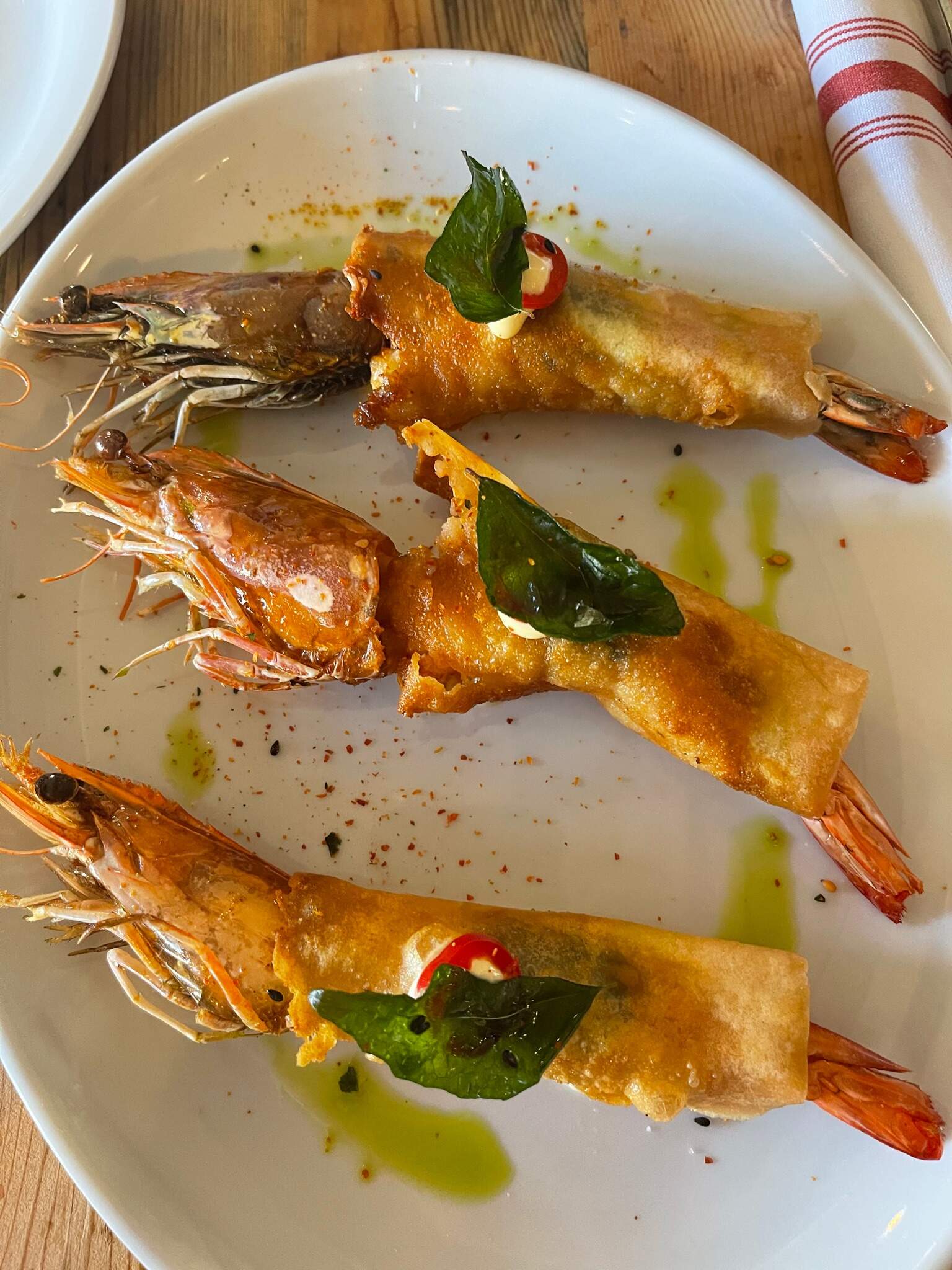 I hate pay walls The internet should be free for all. Below is the text and pictures of the review.

Everyone deserves a splurge this year — why not wagyu?

The prized and notoriously pricey Japanese beef is, to some foodies, the height of carnivorous decadence. Buttery bovine bliss. I’d been wagyu wary, however; scorned by a deeply underwhelming four-ounce cut I tried at Gordon Ramsay Steak in Atlantic City in 2019. Talk about a waste of $140.

But hey, 2021 is all about rebirth and reconnection, right? Flash forward to earlier this week, as I stared down a piece of A5 Miyazaki Wagyu, one of many luxurious red-meat options at celebrity chef David Burke’s new Red Horse steakhouse in Rumson. At a much more reasonable (but still relatively ludicrous) $55 for four ounces, I indulged again on the fancy beef cooked on a salt brick. Thankfully, it was miles better; maddeningly tender and flavorful — a tease at such a small portion. Back on the wagyu wagon I climbed.

Burke, a Hazlet native who owns more than a dozen restaurants across the globe — including an eatery in Saudi Arabia — launched his sixth Garden State venture March 24: a high-end American steakhouse with Asian flourishes and nostalgic flare. It’s all more or less on par with the restaurateur’s reputation for ambitious yet playful cuisine (you may recall his calling-card bacon on a clothesline)

The restaurant is located in the same building that once housed local landmark Fromagerie, where Burke worked as a teenager and eventually took over before it closed in 2015.

As Burke is widely considered a steak specialist, let’s talk more beef. The distinctly tangy, dry-aged ribeye ($59) screamed classic American steakhouse and was cooked to a picturesque medium rare throughout its monstrous 20 ounces. Those looking to go even bigger may try the Chateau Beyond bone-in filet for two ($95) or 34-ounce porterhouse for two ($125). The usual New York strip ($45) and filet mignon ($39) were available, too.

The ribeye paired nicely with a crock of “onion soup” mashed potato gratin ($10), where the sweetness of the caramelized onion cut nicely through the potatoes’ ultimate silk.

The roast “gypsy” style duck ($35) wasn’t quite on the level of David Viana’s mallard work at Heirloom Kitchen but was sumptuous nonetheless. The duck was tender, though I wished the skin had been a bit more crisp. The sweet potato vanilla puree was terrific, though, as was the obscenely delicious foie gras dumpling, served beside the duck.

The roast bone marrow was the most visually appealing dish of the night — an easy A+ for presentation. The pâté’s fluffy texture merged with the marrow’s singular umami flavor was a lavish treat, elevated further by a winning short rib marmalade served beneath the bones. An opulent appetizer at $32, sure, but impressive nonetheless.

My favorite dish of the night, however, was a relative bargain: The crave-able duck and pistachio potstickers ($16); delicate dumplings loaded with succulent duck, drenched in a spicy, tangy chili citrus sauce heavy on the cumin. I might have licked the plate clean had I been dining at home (my table manners have decidedly waned since last spring).

If you somehow leave room for dessert, the tin can cake ($24) served with chocolate and caramel sauce, vanilla gelato and heath bar crunch was, in a word, epic. The rich, gooey molten chocolate shamed every lava cake I’d ever tried. Our server warned us it would take about 20 minutes to bake, but brought us mixers covered in fudgy batter to lick while we waited — a charming and clever touch.

My main complaint for Red Horse had nothing to do with the food. The dining room felt far too crowded for a lingering pandemic and 50% capacity limits. While I can’t be certain the place was breaking any occupancy restrictions, I do know the tables surrounding ours were all full and not particularly socially distanced. If I wasn’t already vaccinated, I would’ve been very uncomfortable. The restaurant does not offer outdoor seating.

If I wasn’t already fully vaccinated, the number of people in the restaurant — which doesn’t offer outdoor dining — would have made me uncomfortable.

But if you are vaccinated, you couldn’t pick a much better place to celebrate the occasion. The rustic and somewhat scenic dining room, with panoramic windows and dark wood, was cozy and smart; certainly worthy of special occasions.

Admittedly, I was a bit skeptical of Red Horse after my last Burke dining experience. [

But as I rolled myself out of Red Horse, gleefully stuffed, my faith was restored. 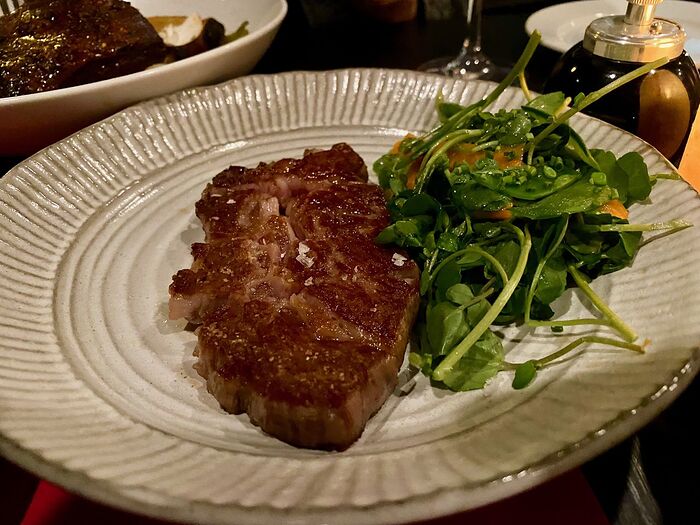 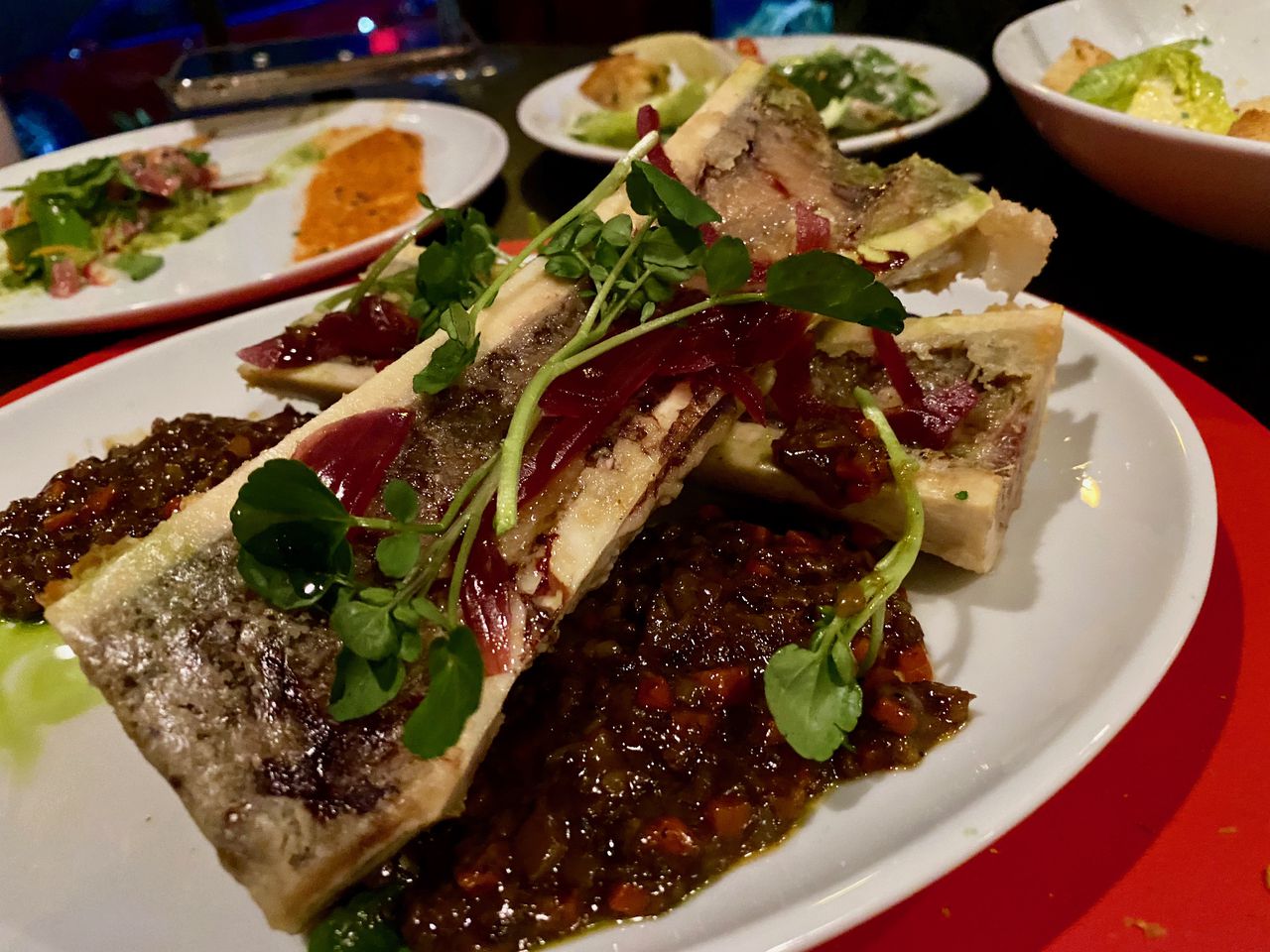 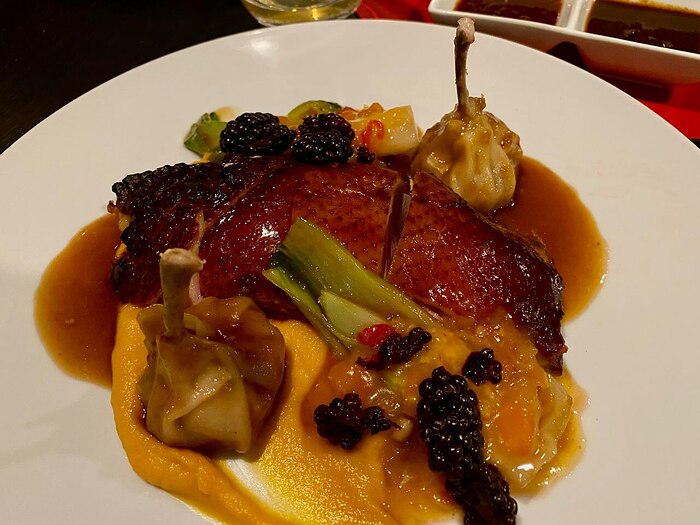 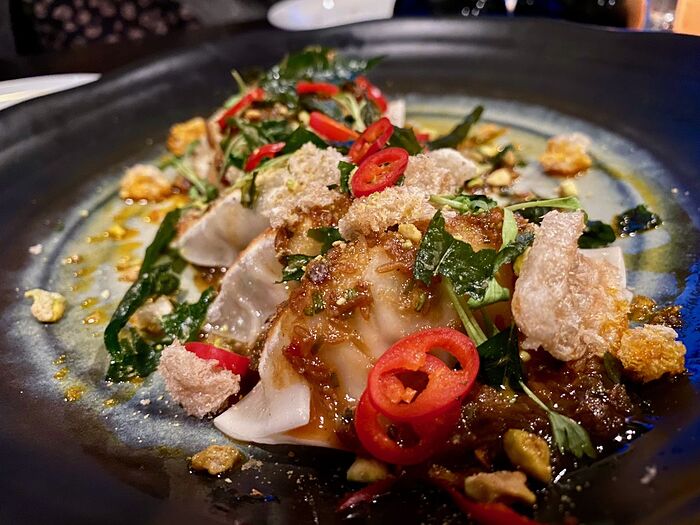 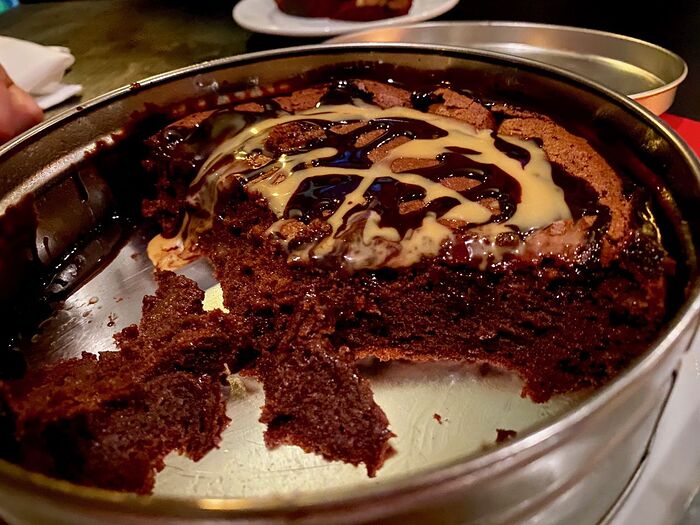 Thanks VERY much for posting this, Andrew! I’m curious–who was the reviewer?

I’d like to predict that @seal will be trying that cake. Anyone want to put money on that? hehe

(Snark: An editor obviously made one sentence better but forgot to delete the original…this is one reason I’m choosy about the digital subscriptions I pay for.

You would think David Burke wrote it since that’s the only time you hear good things about one of his restaurants. But I guess he found one fan in his career, Jeremy Schneider.

I’d like to predict that @seal will be trying that cake. Anyone want to put money on that? hehe

Since my in-laws live nearby that is almost a certainty! So, five bucks that I will!!! 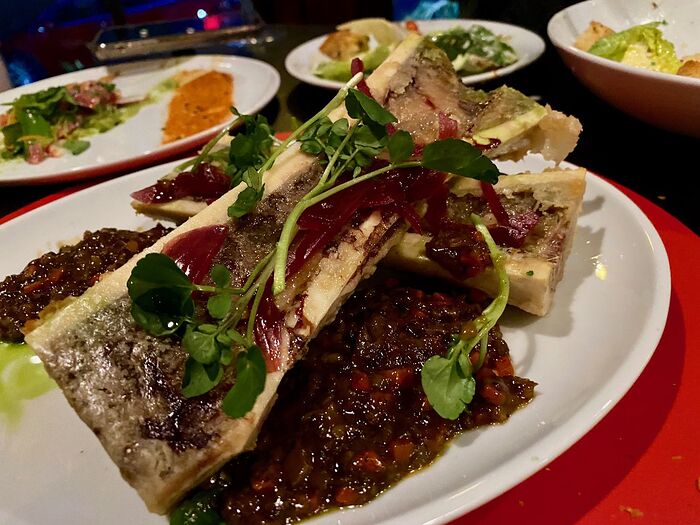 And the thread needs moving to the appropriate sub-forum. This one is for technical discussions about the way the forum works.

Not sure how I ended up here

Take more water with it next time.

Despite a mediocre experience when he last took over this location, I was willing to give this new iteration a try, until I scrolled to the bottom of the on-line menu and saw this:

“All prices that are displayed on our menu are our cash prices and any other alternative forms of payment may result in a 3% non-cash adjustment.”

So I have instituted my new rules

“All prices that are displayed on our menu are our cash prices and any other alternative forms of payment may result in a 3% non-cash adjustment.”

The new norm in this area. Red Bank restaurants started that even before the pandemic. It is discussed extensively on one of the threads.

I can see maybe a small mom-and-pop doing this (begrudgingly I don’t mind if a small place) but for a restaurant where no bill is going to be less than $100-150, it’s tacky and tasteless.

I thought it was poor the first time I saw it and I still think it’s poor. List the all in price. If someone pays cash (not so likely these days) then give them a 3% discount.

@gcaggiano agree completely. I would support these prices if tip were included though.

If you must eat somewhere that charges that much and adds on for the use of a credit card, pay them in used singles. Bundle them in groups of five or ten so you can count them quickly, but remove the bands before you drop them in a heap on the payment tray. If they want cash, give them cash.

(Note: They are entitled to refuse coins in payment, but not paper currency.)

Here’s an example: I never have cash on me. My favorite bagel place takes card (thankfully; not many of them do around here). I’ll gladly pay their 3% upcharge on my $3.25 bagel and coffee. They are a really small business and every cent counts.

But when you own 16 restaurants, are in Rumson, and have $75 steaks on the menu, that’s a little ridiculous.

And for those interested: my article on the subject circa July 2019.

Beware: The “Cash Discount” is Coming

I first saw a note stating a cash discount at a restaurant I frequent three or four months ago. I remember thinking that this was only the beginning. Surcharges are nothing new. With rising costs i…