Inspired by the dessert spots thread starting a thread for Toronto GTA pizza spots.
for delivery a safe backup is North of Brooklyn
Cafe Oro did Napoli
Libretto was below average last couple of times
Badiali which seems to be the rage nowadays
Quinto Basta was decent find in the neighborhood
Nervosa is ok if you want to be in the middle of Yorkville
Eataly hmm below average for all the types I have tried there

I tried Badiali today so maybe that pushed it a bit 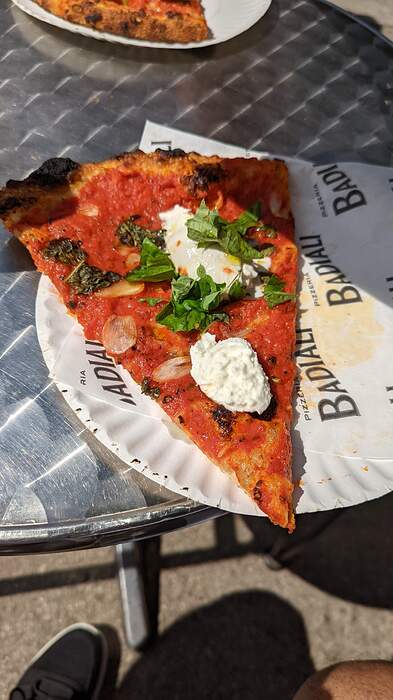 Nice idea for a thread.

My go-to for slices near Yorkville is Eataly. I’ve tried at least 10 different slices. Probably 90 percent of my Toronto pizza intake since March 2020 has been Eataly Slices.

For whole pizzas to-go, I like Blondie’s and Descendant.

I’ve tried Maker twice and find it pretty good but not all that. Better than meh.

I have tried to try Badiali’s twice. Once the line turned me off, another time, I had my car and couldn’t find parking after circling for 20 minutes.

I enjoyed a pizza from Piano Piano (restaurant, not the pizzeria) maybe 3 months ago.

I want to try Ambassador in Bloordale (Windsor-style). http://www.ambassadorpizzaco.ca/

I also want to try Mac’s in Bloordale.

I’m keeping track of some pizzas I order here. A Pizza Project - #18 by prima

I like Mangia & Bevi’s pizza at the restaurant. I haven’t tried their “fresh sealed pizza” but it looks interesting https://mbresto.com/fresh-sealed-pizza/ 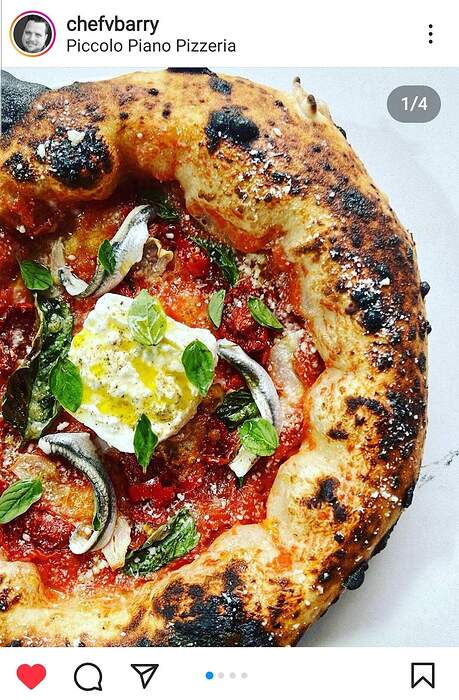 Thanks for sharing the thread. Maker’s was poor on both tries and I didn’t get what the fuss was all about.
Blondies has a location down the street so might try it sooner.
Will follow your list as well.
I have fond memories of Manga & Bevi unfortunately don’t venture out to that area anymore.
Terroni tried ages ago and haven’t been back.

Libretto and QMP remain excellent, though don’t travel as well for take-out. The exception is the Sicilian-style pizza at Libretto, which is thicker.

All the pizzas we have had at Dova have been great. Same for Ardo - there was one with fresh peaches that was awesome.

One Night Only excels with interesting combos for toppings. The Urban Cowboy had roast beef, fresh horseradish, pickled onions, and mushrooms, with a horseradish cream sauce base.

Nodo had a fun variation on a Hawaiian with proscuitto cotto and grilled pineapple.

Gusto 501’s pizza carbonara is a great riff on the pasta.

Stock TC has a really good mortadella and pistachio pizza.

Last year we had a great pizza at Coppi - potato, walnut, honey, egg, and white truffle.

North of Brooklyn is very good, particularly the Killer Bee and the Puttanesca.

Blondie’s had good toppings, but the pizzas seemed overcooked and they didn’t hold up well to travel back to our house.

We liked Maker when we tried it - had the Napoli Dynamite and the So Mushroom.

Giulietta has had some great pizzas: one with lardo, pistachios, and smoked scarmorza; one with sopressata, garlic, and Sicilian oregano; one that was a riff on l’amatriciana.

We have only tried Eataly once, but really liked a pizza with fresh pear, gorgonzola, and proscuitto. Nice chewy crust.

Figo has a great dough base for whatever toppings they happen to be putting on.

F’Amelia has had some nice pizzas, including one with nduja and kale pesto.

Superpoint had a great one with nduja and squash.

When we go to Terroni, we tend to get pastas, but the pizzas have all been very good. The C’t Mang is a longstanding favourite - pear, gorgonzola, walnuts, speck.

Based on the pizza dough side we had at Tutti Matti recently, I would definitely want to try their pizza.

Not exactly pizzas, but we love everything at Pizza Pide and the maneesh at Soufi’s.

Thanks for sharing yeah Pide isn’t pizza but sometimes I will pick it over Pizza!
For pide I stick to the original master Mustafa since I can have delivered downtown now. Their kebabs on weekday are worth trying as well.

For best pizza in Scarborough, there are 3 contenders.

For traditional, its Fratelli Village Pizzeria every time. Good choices in other traditional Italian fare there too.

Looking for vegetarian that isn’t boring? That’s Mark’s Pizza literally across the street from Fratelli. Oh they have meat options, but they also make going vegetarian sexy.

For best new pizza in Scarborough, ya gotta try Anabolic Eats. They only make 3-4 types for now, but DANG those pies are tasty. They use sourdough as the platform and bake them perfectly to achieve great flavour. You can find Anabolic Eats online or in person at the Scarborough Farmers Market.

When I’m allowed to post links (thanks for not telling me, Hungry Onion) I’ll be back with updates.

Just keep posting, Googs. The links will be possible in a few posts

Welcome Googs. You mentioned Mark’s back on Chowhound. Still have to make it there, but it is on my list.

One of you loves Eataly pizza, one of you doesn’t. Compare and contrast notes.

I always say the crust makes the pizza, but that Piccolo Piano Pizzeria pic is Way too much crust for this girl. Makes me yearn for the flour shortages of yore.

I haven’t tried it yet.

I think it’s a Your Mileage May Vary, so he’ll note my preference and I’ll note his, and we will focus on helping each other find other stuff we both might like.

I have less interesest in explaining my preference or reading other people’s explanations of their preferences lately .

Had 2 bad meals at Caffe Nervosa maybe 10 years ago (undercooked salmon and stale pine nuts in a salad), so haven’t been tempted to go back, when there are so many places to try, so I’ll probably never try their pizza.

Oh, if we’re gonna do a not-really-pizza, but I like it category, I’ll toss in Mamajoun Armenian Pizza on Ellesmere west of Warden. Can’t believe I didn’t mention them in the first place. Everything from scratch and chef is a super-sweet, hard-working guy.

This is a fun thread
Non-Italian pizza

Or “I Can’t Believe It’s Not Pizza”

Has anyone here tried Slowhand Sourdough Pizza? I have a friend who swears by it. I gotta admit, the website pics (which I still can’t post) look pretty tempting.

DJ, may I call you DJ, for the pizzas that didn’t travel well, have you tried ordering them half-baked and finishing them at home?

Call me whatever is easiest to type!

We did not try ordering half-baked as we have no large oven to finish the job. Our oven broke down early in the pandemic and apparently the necessary part is not manufactured anymore. We do eventually plan to reno the kitchen and get a new range and oven at that point, so we have been making do with our toaster oven, which can bake/roast most of our needs (but not a larger pizza).

As one of the ones who liked the Eataly pizza we had, it had a fairly thick, chewy, and tasty crust. I have no problem eating lots of good crust. The toppings were a nice combo of pear, gorgonzola, proscuitto, and pecorino - all seemed to be good quality ingredients with plenty of flavour.