I’ve been trying the deluxe pizzas in my vicinity over the past year. I’ve tried around 6, so far.I focus on the indie and local shops. I tend to order Deluxe , which in Ontario usually means green pepper, mushrooms and pepperoni, occasionally also Italian sausage, bacon and/or olives. Tonight’s pizza is from Sissio’s, a very small chain with a location in London, Ontario, Sarnia and Corunna, ON. They start with a basic, and I added pepperoni, fresh mushrooms, onions, green peppers and green olives. 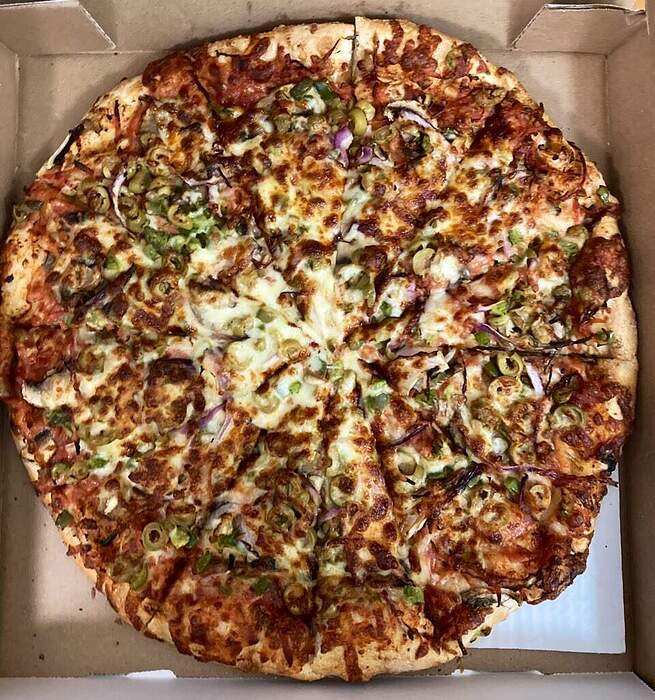 I’ve been trying the deluxe pizzas in my vicinity over the past year. I focus on the indie and local shops.

Is the project to try as many indie shops near you as possible, or as many different versions of deluxe pizza as possible (and compare the differences)?

We tried most of the indie pizza joints in our delivery radius when we first moved to Yonkers almost 6 years ago. Most of them were pretty bad. However, one bright spot in the pandemic is that our local Frank Pepe’s, a small CT-based indie chain doing coal-fired, New Haven-style pizza, now delivers to our side of town. Their pizza is fantastic - good enough that I don’t mind that it arrives cold and has to be refreshed in an oven. We typically order their meat lovers, though, rather than supreme.

I do like supreme pizza, which to me means pepperoni, sausage, green peppers, onions, mushrooms and olives, but around here most local places leave their vegetables in HUGE pieces - like what you’d expect to get in sausage and peppers. Not a fan of that on pizza - when I get supreme, I want all the vegetables chopped relatively small and evenly dispersed. Also, I want to know if ham is a component so I can sub something else in for it - not a fan of ham at all - and again, places around here often just put “supreme” on the menu without stating what exactly is included. Hence, I avoid supreme locally unless I am ordering from a national chain where I know exactly what I’m getting. When I visit my hometown, though, you better believe a supreme from my childhood favorite joint is the first thing I want to eat!

These are my goals:

Try all the indie or local chain deluxe or equivalent pepperoni/mushroom/pepper special pizzas near where we are.

Try the places that have been around for 30 plus years before they’re gone. I usually alternate between a newish pizzeria and an old school pizzeria.

I admit, I skip :
cheap places that are 2 for 1 pizza
places with bad reviews
places with owners who are jerks on Twitter

Visually, I’m intrigued by what the deluxe pizzas look like. I usually take a bird’s eye photo of the whole pizza.

Not too serious or fussy about the style, although we prefer a doughy old school pizza crust with some chew, not too much char. Neapolitan doesn’t go over that well here- and isn’t that popular. In this city of 400 000, we only have 1 Neapolitan pizza spot, and 1 Detroit style pizza spot.

We only get pizza once a month, so not too strict about the comparisons.

I encourage anyone to add a pizza project or pizza goals of their own to this thread.

Regarding your skips; don’t be too hard on the first two. I’ve found even the cheapest pizza’s are not too bad (my son will bring home a Little Caesars, and I have to admit I do find myself grabbing a slice or two.) As far as places with bad reviews; I guess it depends on how many and their consistency. I’ll read the review (“forewarned is forearmed”,) but the decision is still mine. As far as Twitter jerks go; I"m not on Twitter. Regarding the rest? Totally agree. Find what you like, stick with it, then try the others. We even have one called “Curry Pizza Company.” A little bit of India meets Italy.

The Twitter jerk comment has more to do with that pizzeria owner’s position and comments on some public health issues that relate to politics. Knowing how he thinks, and the movements he has supported which has led to more people becoming ill, I choose not to spend money at their restaurant.

I only get pizza once a month, and I live within a 15 minute drive of 50 or more pizzerias, so cutting out the 2 for 1 pizzas is a way to narrow the options.

My city has some halal pizza, some Middle Eastern shawarma/pizza joints with fusion pizza, 2 Indian pizzerias, and after I plan to try some of them eventually.

If I lived in a town with 8 places making pizza, I would try them all!

I’m a big fan of Pepe’s except for the Yonkers one (near me). Sally’s has opened in Stamford so the traditional basic pie or pepperoni is covered. However, not sure if You are in New Haven or not but Modern makes the “Italian bomb” which is a sensational supreme pie. Everything is cooked properly, if it should still have some crunch, it does if it should be soft it is. Also , they have bacon on it, which I didn’t think I’d like but it turned out it gave an extra hit of salty goodness and smoke.

I tried the Pepperoni Pizza and the Mushroom Pizza at a place called Pizzeria Madre in London, Ontario. This a Neapolitan-style pizzeria, and they don’t have a pepperoni/ mushroom/ green pepper pizza on their menu. 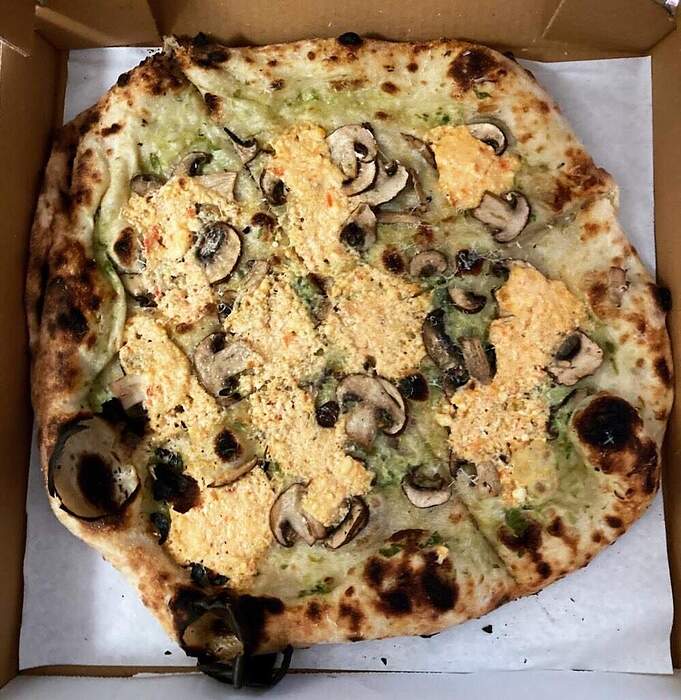 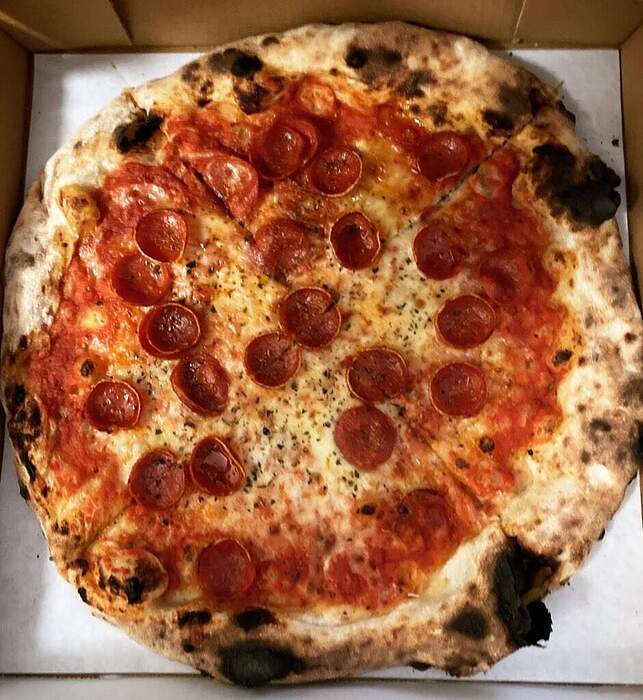 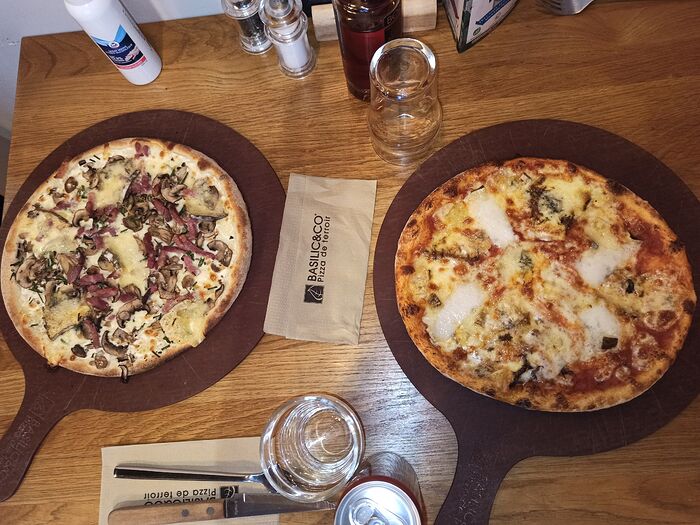 The best pizza I’ve had outside of the U.S. was easily Basilic & Co. a French chain with regional French toppings. Quality stuff, as was the espellete pepper oil that was placed on the table.

Ha ha… for me, the best pizza is a plain cheese pizza, but only when it is so good that toppings ruin it (which is usually the inverse for most pizza places).

I remember a gig in LA decades ago where we were in the studio all day, and around 6pm when we finished up all I wanted to do was get out of there and go home. Our producer (Jermaine Jackson no less) absolutely objected, and insisted we do pizzas from a place down the street named Luigi’s. They ordered them with “extra cheese and slightly extra sauce”, and it was the best pizza I have ever had (even to this day).

Went back many times to get this exact same pizza and it was always amazing. Unfortunately I can’t find them on Google maps so I guess they’re gone. Incredible memory, and oh boy do I wish I could find (or make) something anywhere near as good as these were.

I remembered seeing a Luigi’s on Kitchen Nightmares. Luigi’s D’Italia in Anaheim. Not LA but close. Looked it up, and it’s still open but moved to Fullerton. Pretty good recent reviews on Yelp. Dunno if that’s the place you were talking about.

Naw… the studio was called SoundCastle, and was located on Rowena drive in Silver Lake (and appears that it is gone as well). My recollection (albeit dubious) was that Luigi’s was on Hyperion just north of Rowena (which now appears to be a 7/11 type store).

It’s sort of a take on Saskatchewan-style, in that the cheese is on top of the meat.

Modern in some ways, in that they add sesame to most crusts, have several Indian pizzas ( tandoori chicken, butter chicken, some paneer pizzas), and a Spicy Perogy Pizza. Perogy Pizza is a Western Canadian thing, that has been available at Boston Pizza and Panago for decades. 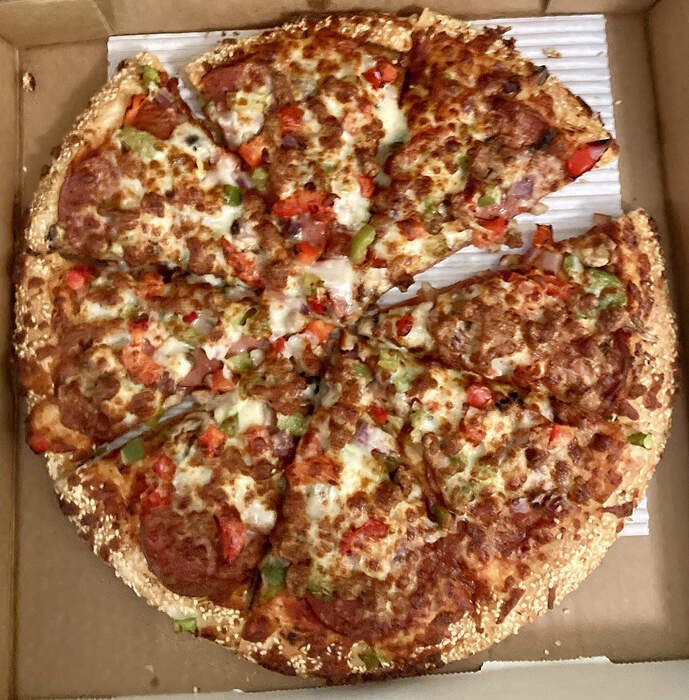 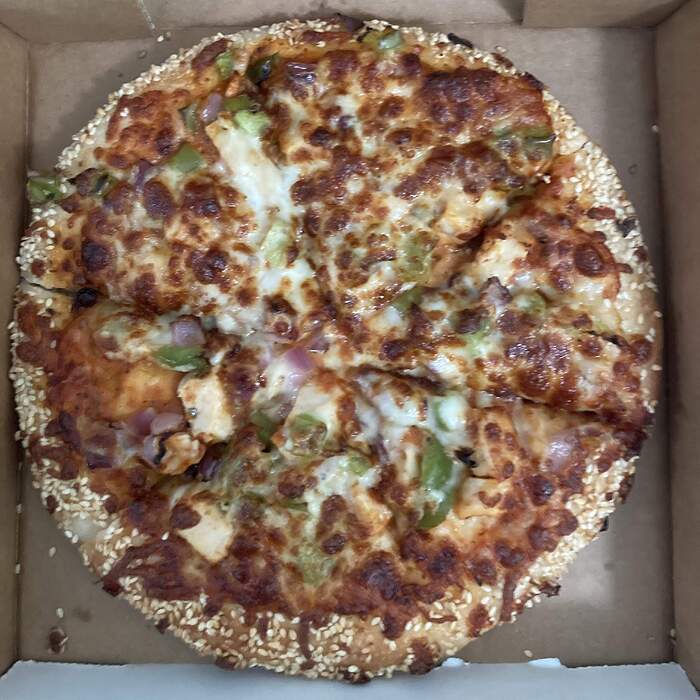 It’s hard to find outside Saskatchewan and Alberta. 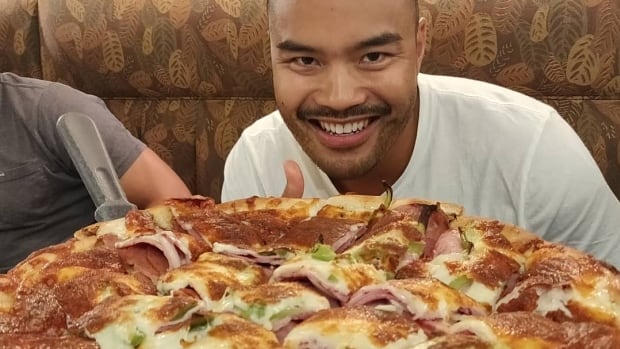 Regina-style pizza is largely a mystery to those outside of our prairie city borders, and even many locals don't know the history behind it. Allan Pulga is here to enlighten you. 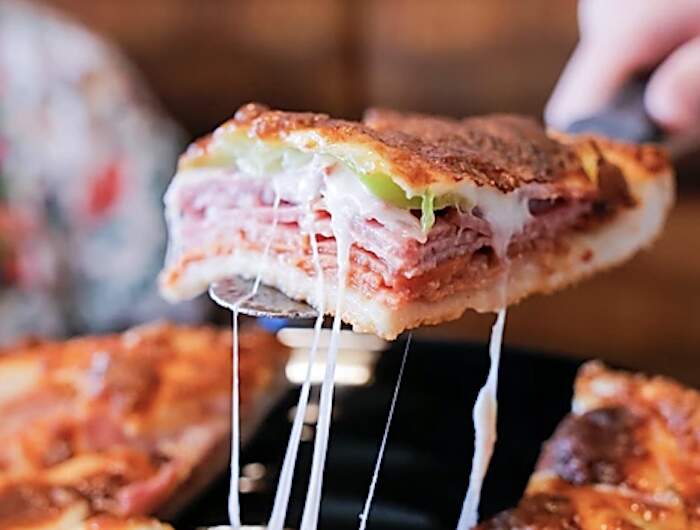 in Canada, pizza aficionados have to thank four Greek immigrants for the country’s own unique pizza, known as Regina Pizza.

Turns out Red Swan began in Saskatchewan a few years ago.

I’m sure I’m also not aware of other
Canadian regional styles. 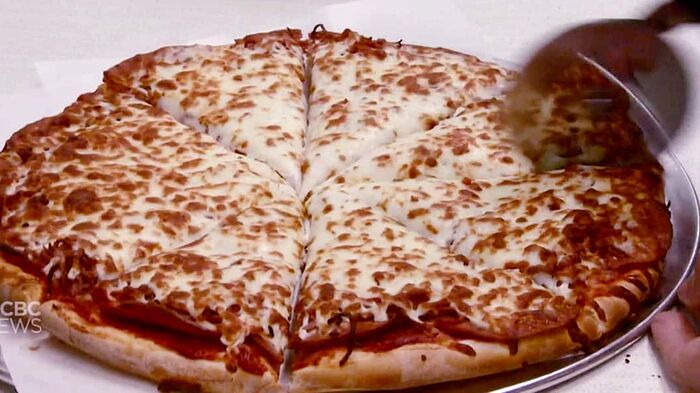 A man from northern Manitoba has created a business selling pizzas made in his hometown's style. 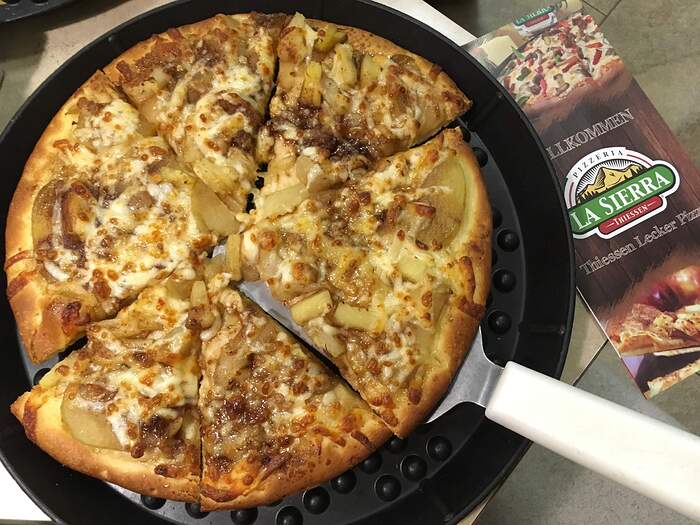 Ciudad Cuauhtemoc, Mexico has a good pizza place called La Sierra. They have a pie called the Manitoba, with queso mennonita “Mennonite cheese,” among other ingredients.

This phot, however, is of the dessert pie, with Chihuahuan apples, mennonite cheese, and caramel.

I had a nice bacon, apple and maple syrup pizza at Foxy in Montreal before the Pandemic .

Some pizzerias in Toronto have a duck confit and pear pizza that’s nice. 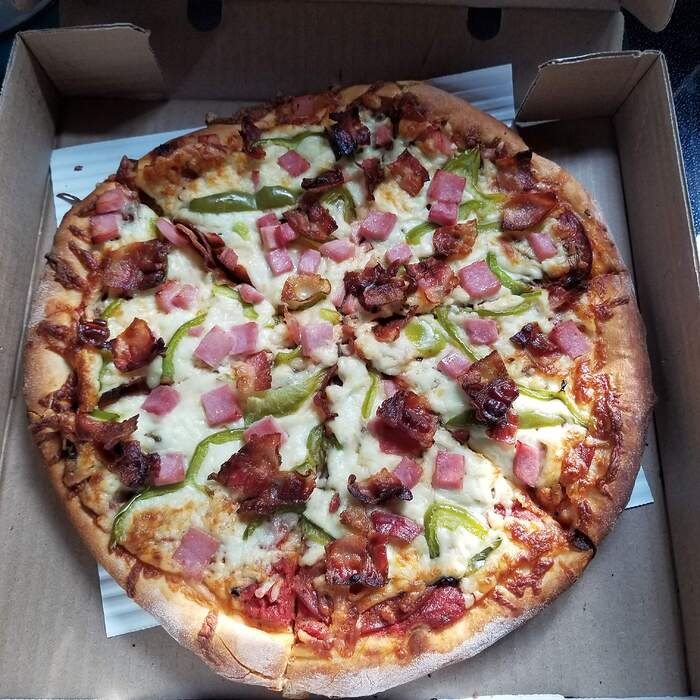 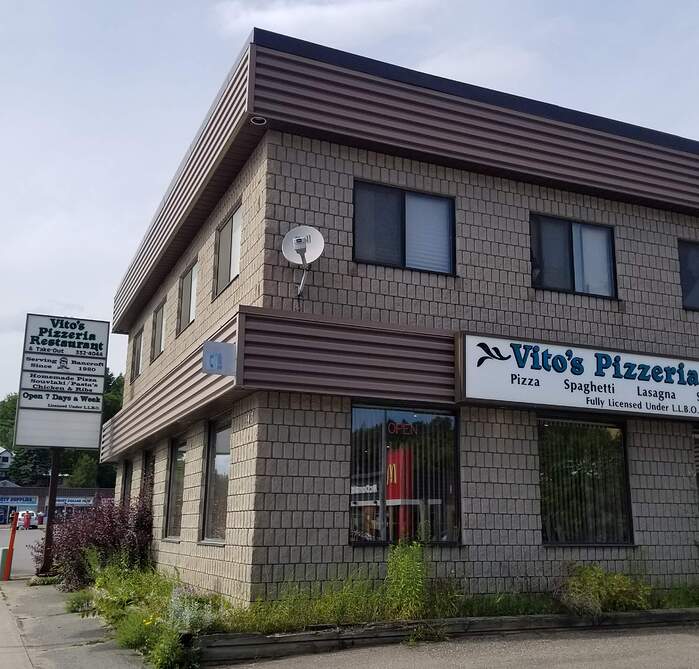