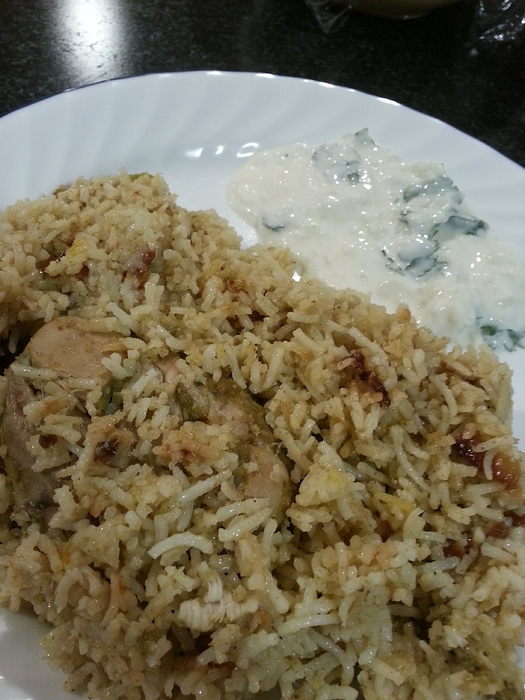 I know it’s past the deadline, just didn’t get a chance to sit down and write this post till today. I took some pictures a couple week ago when we made chicken biryani for guests. With cucumber raita.

1 kg chicken, cut up into pieces, on the bone

Fry onion in 1/4 cup of oil until browned. (These are fried darker and at a higher heat, but you can use regular caramelized onions.)

Place chicken with marinade into your oven-safe cooking vessel and mix with the yogurt. Arrange into an even layer.

Spread fried onions and the frying oil over chicken. Pour saffron/milk over the whole thing.

Let the aromatics boil for a couple minutes. Then drain the rice and add it to the boiling water. Cook the rice a bit more than half done. This is just based on experience. If in doubt, err on the side of overcooking.

Heat the bottom of the pan until you can hear the marinade cooking. While heating, seal well, using foil if you don’t have a tight fitting lid.

Place in the oven for 30 minutes. Turn the oven off and wait another 10 minutes.

Remove from oven using mitts and carefully remove the foil/lid. I know you want to dig in, but the hot steam can burn you if you rush.

Gently mix the biryani before serving. I wasn’t gentle so you can see a lot of broken rice grains. 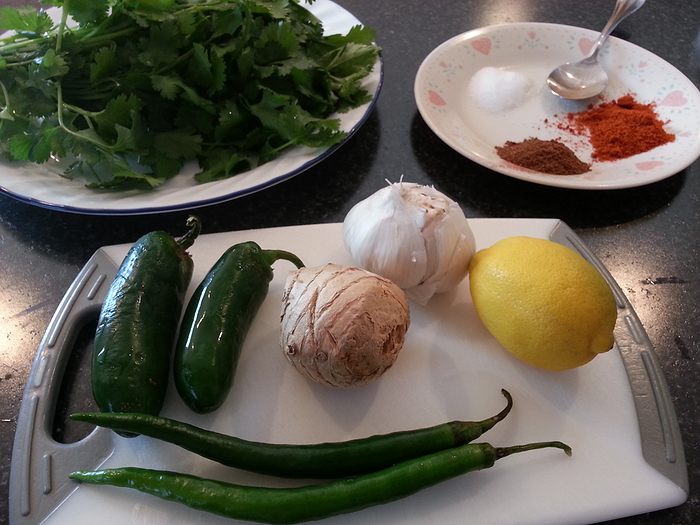 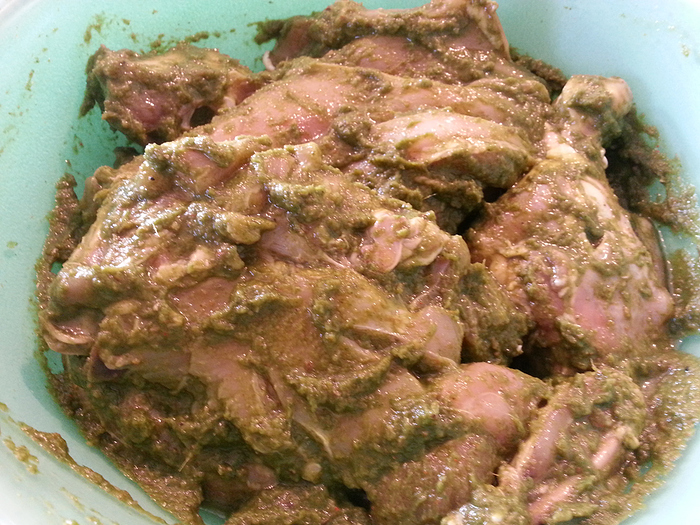 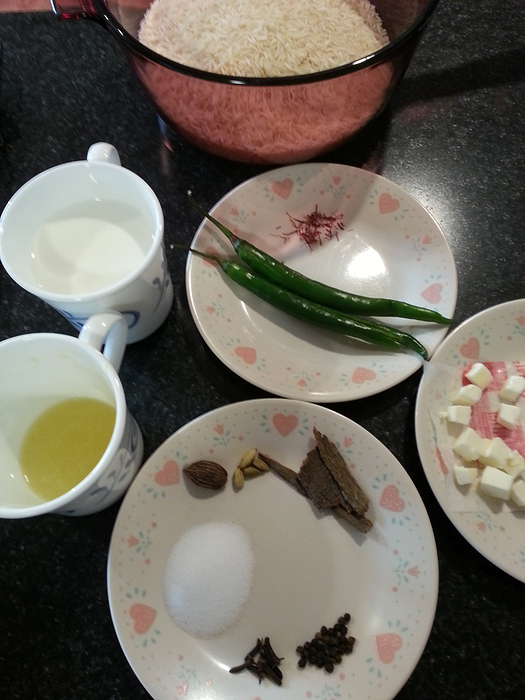 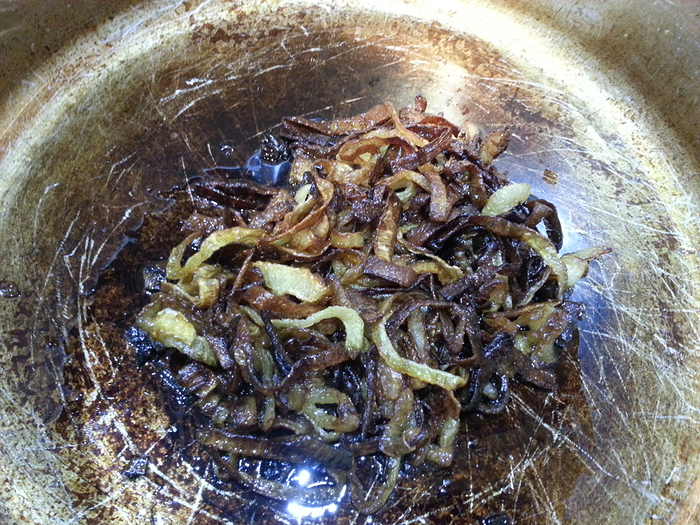 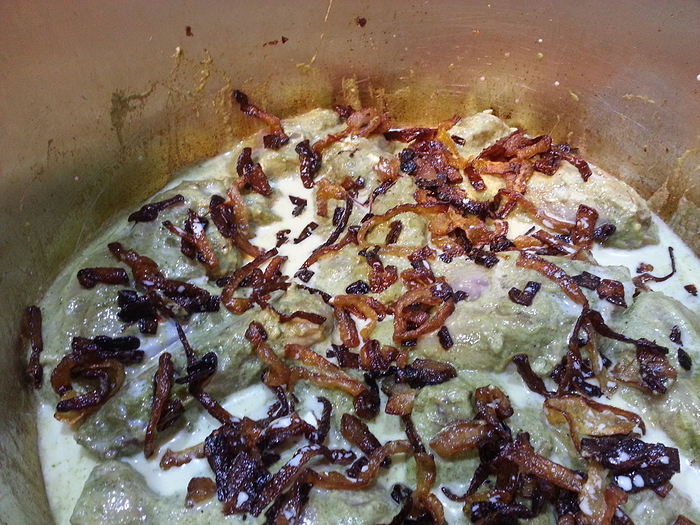 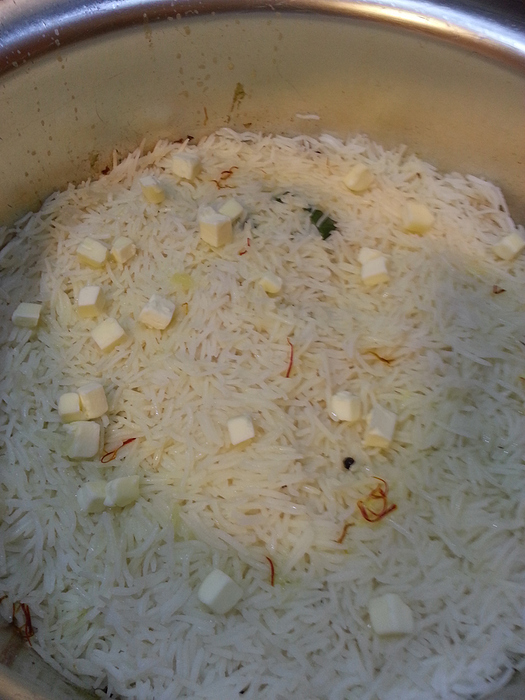 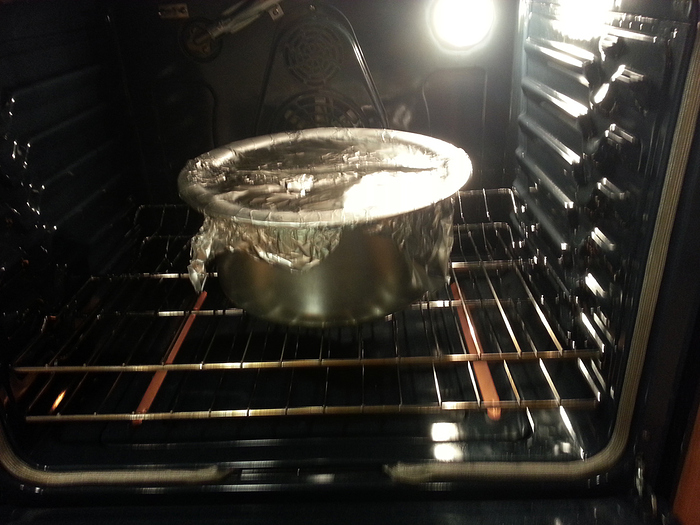 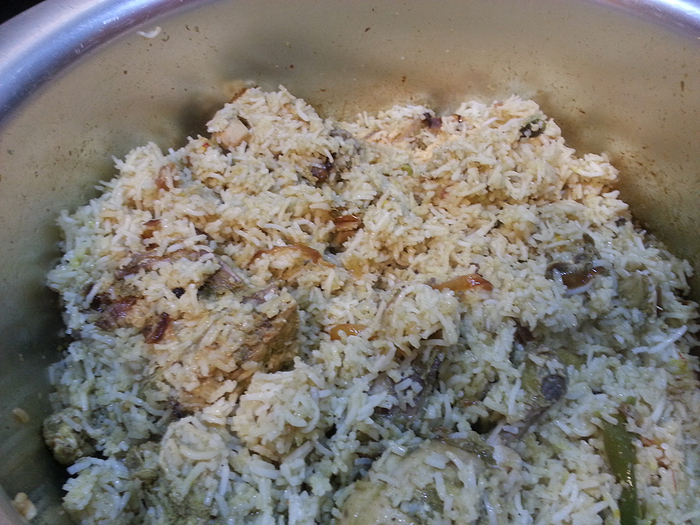 This is more ratios. I start with equal volumes yogurt and grated cucumber, then adjust if needed. Cilantro, salt, and red chili powder are all adjusted as necessary. For example, if the cucumber is bitter, I will use extra salt. If the green chilies in the biryani were too hot or not hot enough, I’ll adjust the amount of red chili powder. And cilantro varies in strength, too, especially for a raw preparation, so I taste as I go.

Leave in the fridge for the flavors to meld.

Salt is Morton table salt, adjust appropriately for kosher salt. To the boiling water, I added more than 10 peppercorns because mine were a smaller diameter than usual. Also, I was using Indian cinnamon, so I estimated how much would be equal to a regular cinnamon stick. In the picture, there is far too much milk in that teacup for that amount of saffron. Use less than 1/4 cup. (Maybe steep is a better term than dissolve.) The biryani should have better color than the pictures. I panicked and added extra rice because our guests are good eaters and we thought it wouldn’t be enough. Don’t do that. Your guests might still love it, but you’ll know. Lastly, for whatever reason, all our Hyderabadi friends use this type of pan: https://www.amazon.com/dp/B0161V9TS0

Thank you for the wonderful report! Your dish looks amazing.

Thanks for the detailed instructions! I have only tasted restaurant biryanis before. How do home made usually taste different?

Which style of biryanis is this, Hyderabadi? Your recipe may tempt me to make this dish at home finally one day.

Nice recipe. No wonder I like biryani so much; it has milk, butter and yogurt in it

Question: Did you remove the cardamom pods and cinnamon stick before serving and eating?

Thanks for the detailed instructions! I have only tasted restaurant biryanis before. How do home made usually taste different?

Which style of biryanis is this, Hyderabadi? Your recipe may tempt me to make this dish at home finally one day.

Usually, restaurants sort of mix different things together to order and that’s restaurant biryani. It can be done well, but it’s not what I think of as biryani. There are some restaurants – like on Devon in Chicago – where they make huge pots of traditional biryani and then reheat to order.

This is definitely Hyderabadi-style biryani. My family is actually Punjabi, but growing up our closest family friends were Hyderabadi. This recipe is verbatim from one of those families. Believe it or not, this is the everyday version, something they would make 3 times a week! (Yes, I would be “in the neighborhood” as often as possible.)

This specific style is more accurately termed “dum ki biryani”. Dum is that final steaming step to finish cooking the rice. Within this style, it would be subclassified as “kachi”, meaning raw; i.e., the meat isn’t cooked separately first. You will see the term “kachi gosht”. Gosht usually refers to goat meat, which for some odd reason we translate to “mutton”. It is not mutton in the true English sense.

Question: Did you remove the cardamom pods and cinnamon stick before serving and eating?

No, it’s pretty much never done. We are trained from birth to move the aromatics aside. For the uninitiated, however, I know it can be very annoying. Even now, once or twice a year, I’ll bite into a clove or cardamom pod and have my palate shot for the rest of the day.

That’s really funny. Good recipe. Like someone else posted, you made making biryani at home seem doable. Thanks.

This is really interesting stuff. I’ve been exploring Indian and other South Asian foods lately. I was kind of surprised at all the different regional styles and preparations. It’s made even harder to figure out, by a lot of Indian-American restaurants serving an amalgam of different regions and cultures.

This might make a good thread: Favorite indigenous or native foods (something like that). N. Americans could also participate. New England has a distinct food culture.

P.S. I’ve noticed that mutton/goat thing on menus. Thanks for clarifying.

Great recipe, and great, knowledgable comments in the discussion following. Thanks.

I liked your clarification that the stuff passed off as biryani in many U.S. restaurants is
pre–cooked rice and separately cooked chicken, meat, etc., that’s mixed and heated
before serving, as opposed to rice cooked with the meat chicken, etc. (whereupon
the flavors of the meat and chicken infuse into the rice.).

I had a question about serving: biryanis I’ve had in India are often served to show off
the layering of rice and meat/chicken, not mixed up. Is the serving method you describe
common?

I had a question about serving: biryanis I’ve had in India are often served to show off
the layering of rice and meat/chicken, not mixed up. Is the serving method you describe
common?

You’d think this question would have a simple answer, right? I’ll give a somewhat over-generalized answer. For more elaborate biryanis at parties, it is often served as you described. However, for this presentation, the biryani has to be fresh out of the oven. Otherwise, it’s hard to mix it in your plate once it’s cold. For everyday eating, based on what I’ve witnessed, it’s mixed in advance. Your eaters’ arrival schedules are staggered, plus it’s easier for kids to eat.

Personally, I will always pre-mix because many of my guests aren’t used to the layered presentation. Often they will take too much of the rice layer, or too much of the meat layer. And even if the ratio is correct, they won’t mix it in their plates. They’ll end up eating the rice with something else and then the meat layer is too strong on its own, so it gets tossed. One of my Aunties actually leaves the layers intact in half the serving tray, and mixes the other half. That way people can serve themselves from the mixed half, but still see the presentation.

Thanks. Biryani probably deserves a thread of its own, but let me say quickly that (as you know) there are other versions of biryani with different layerings. One version has a layer of par-cooked rice at the bottom, cooked meat/chicken with its juices and caramelized onions next, and par-cooked rice above that with a few more caramelized onions thrown on. It’s sprinkled with saffron-infused milk, just as you describe, dotted with ghee (in my experience, not butter), then sealed (often with dough) and baked as you say.

I liked your clarification that the stuff passed off as biryani in many U.S. restaurants is
pre–cooked rice and separately cooked chicken, meat, etc., that’s mixed and heated
before serving, as opposed to rice cooked with the meat chicken, etc. (whereupon
the flavors of the meat and chicken infuse into the rice.).

Its not logistically possible that every restaurant is able to offer biryani with every choice of meat if they cook rice and meat together. Now, if they have a special and offer one type of meat only, then I can believe that. One restaurant nearby does that.

Types of biryani, for those who are interested in renditions from various states/ regions:
http://recipes.timesofindia.com/articles/features/9-kinds-of-biryani-every-food-lover-must-know/articleshow/46331164.cms

Thanks. That’s a great link.

MUSHROOM BIRYANI Main ingredients: mushrooms, onions, basmati rice and shallots in rough proportions of 1.5:1:1:0.25 by weight. Use sturdy mushrooms such as cremini or portobello. 1)Rinse and soak rice. 2) If using cremini, leave whole (after cutting off the bottom 1/4" of stem). If portobello, chop into big pieces. 3) Put mushrooms in pan with ghee without overcrowding (may have to do this in batches) on medium high and cook till they have given off their liquid and are lightly browned. 4…

A post was split to a new topic: [Recipe] Mushroom biryani

The issue seems to me to be this: what is “logistically possible” for restaurants, and how close do they need to stay to traditional recipes for a particular dish? Biryani is traditionally prepared along the lines that bmorecupcake describes. The layering of meat/chicken (or alternatives) with rice, and their final cooking together is essential for a biryani. Since “pakka” (cooked) biryani recipes involve precooked meat layered with parcooked rice, it’s quite possible for restaurants that care to offer “true” biryanis if they warn customers that there will be a short wait. They can then offer multiple types of biryani without sacrificing that final, exquisite whiff of flavor when the dish is unsealed.

Simply stirring meat/chicken with rice is, in my view, lazy surrender.

(There are other rice and meat dishes in Indian cooking – pulaos, for example – that better fit what many Indian restaurants in the US offer.)

I have been to a couple of specialist Biryani restaurants in India. They tend to serve the biryani’s on a buffet in the sealed pots they have been cooked in - they are then broken open to serve.

The first I tried was in Chennai at a restaurant with a visiting specialist “Dum” chef and my Indian colleagues were very excited to try it and it had a good selection on offer. The second was at the ITC Maurya which has some decent restaurants, but this was a wedding party with hundreds of guests. Again big buffets with lots of different biryanis in the large cooking pots - all excellent.

I wonder if there is a business opportunity for similar in the US or UK…?