Any amazing recipes come to mind? Something that looks like the dish in the movie a plus. Also something not hard to make.

I have the squash tomatoes eggplant zucchini garlic basil

I like to roast all of the vegetables in the oven and then layer in a dutch oven with slices of tomato, fresh basil, fresh thyme, a bay leaf or two and then back in the oven to cook at 325 for a few hours. Even better the next day. Freezes beautifully and tastes delicious at room temperature on a baguette. Sometimes I add a red or yellow pepper to roast as well. I don’t peel anything.

My SiL makes the best ratatouille I know. She fries the different veg individually which means each is perfectly fried, just needing a little more cooking. She then brings them all together in the pan with tomatoes and herbs. Classic choice of veg - onion, aubergine, courgette and peppers.

She honed her skill when she lived in Mallorca and made the local dish of tumbet which is pretty much ratatouille but with added potatoes.

Whew. That sounds great. I have never made it. Even watched the movie with my kids. I never even looked for a recipe. Thanks for this. Sounds great.

Seems like cooking veggies first either roasting or frying is helpful. @susiqq @Harters

Do you put tomato sauce or oil mixture on bottom of pan in oven or pour over top when baking? Both ? Neither ?

Key is to cook whatever vegetables you are using separately. I brown and season each batch one by one and then dump into a deep bowl. Once the veg are cooked I skin a few tomatoes and quickly cook until they begin to breakdown. Not a bunch of tomatoes. Ratatouille is a vegetable stew not a tomato sauce. Add all the other veg back and cooked until tender. No real set recipe but a technique.

I don’t recall who created the ratatouille version shown in the animated movie, but it WAS a respected chef and there’s a recipe, possibly also a video tutorial. I’m sure you could google the specifics.

Yes there are a million versions even of Remy’s version. I’m also not a great cook. So simplifying techniques like the ones above are super helpful. But thanks for sure @greygarious.

Not a bunch of tomatoes. Ratatouille is a vegetable stew not a tomato sauce.

Team - thanks it’s in the oven smells incredible. I’ll update. I precooked the veggies and layered them - presentation points count with my vegetable eaters. Really appreciate you answering my call.

Any last thoughts about sprinkling Parmesan on after I uncover it and cook it a bit longer ?

Any last thoughts about sprinkling Parmesan on

Enjoy the pure flavours of the veg without being masked by salty cheese.

Heres the scoop on the dish…inspired by Thomas Keller

Actual Provençale ratatouille is more of a chunky rough stew. I was coached by friends and students, all according to Mami’s recipe. The veg arent cooked individually, but in the order of how fast they cook. Pretty because of the colors, but visually not as nice as Keller’s version.

I have also layered thin slices in a loaf pan like lasagna, covered tightly with foil, and baked on the grill. Also delicious.

Parsley and basil on side. Cheers and thanks ! 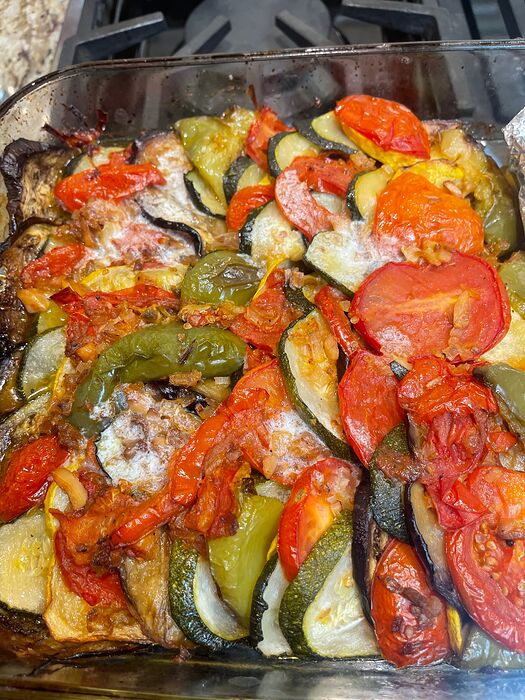 It’s a peasant dish, different in each grand-mere’s kitchen.
The most interesting I have encountered and later duplicated was not quintessential. The zucchini and eggplant were both cut in quarter inch dice and quickly sauteed, not allowed to get mushy. Combined with crushed tomato and basil. A beautiful spoonful on the plate and a light and bright side dish. 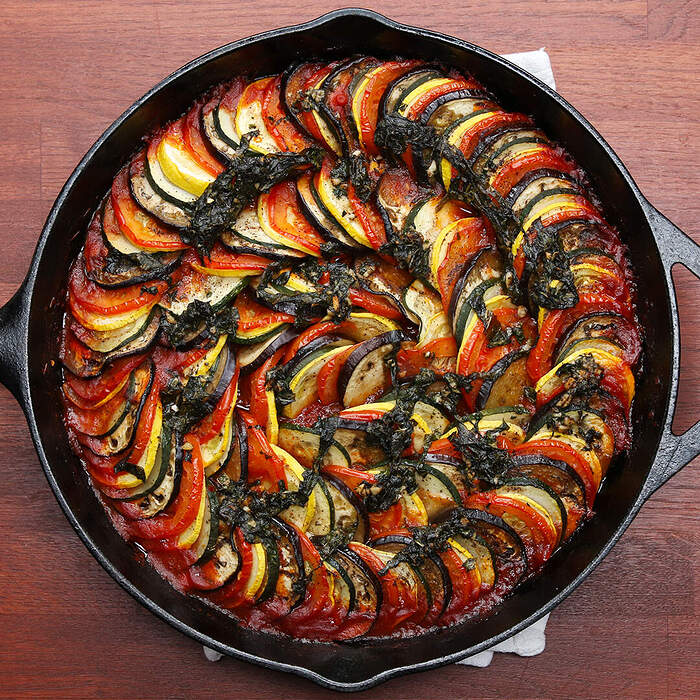 This is one I make from time to time. I’m not sure how faithfully we (my daughters and I, I should add, because they’re always in the mix when we make it) follow the recipe, but we do definitely try to mimic the look. We add a bit of this/that as well.

It turns out quite pretty in appearance (pre-and post-baked, below is a stock image of that recipe pre-baked) and tastes great - everyone (5 of us) except my wife loves it. My wife for some reason has never cottoned to it. [Edit - well, she eats it just fine, she just goes “Meh” whenever we mention it.] 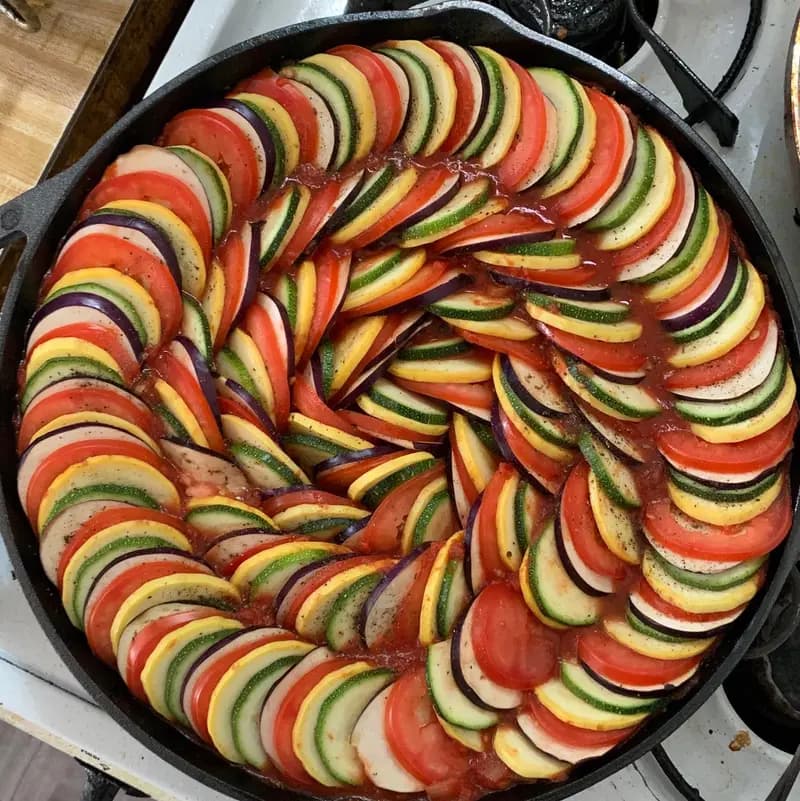 We’ve also several times used the NYT recipe, except my brain is branded in the mold of “it must be an oval or round pan/dish”, so I mod it that way. 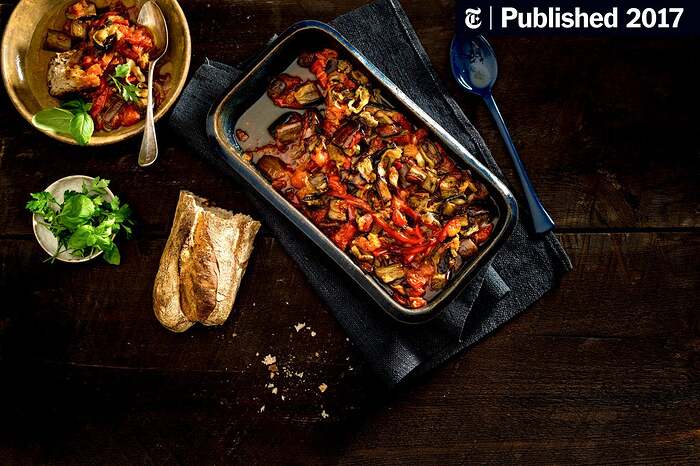 In this classic Provençal dish, summer vegetables, like eggplant, onions, peppers, tomatoes and zucchini, are covered in olive oil and roasted separately, then all together, until they become a soft, harmonious stew This recipe calls for seeding and...

Having 4 kids when the Dis/Pix movie came out who were young enough to like the movie is what got us into making it in the first place.

Also what got us into cutting several cheeses and trying 2 then 3 of them together, like the one rat showed his brother. Before this movie I doubt I had more than 3 kinds of cheeses (other than sliced deli stuff) on-hand at any one time. Since then, and still to today, we have 10-12+ kinds of cheeses on hand at any given time.

I do need to back off now that I’ve so many in college, though.

Thanks. It was super juicy and delicious.

This, rather than pinterest spirals, what you will get in the south of France. 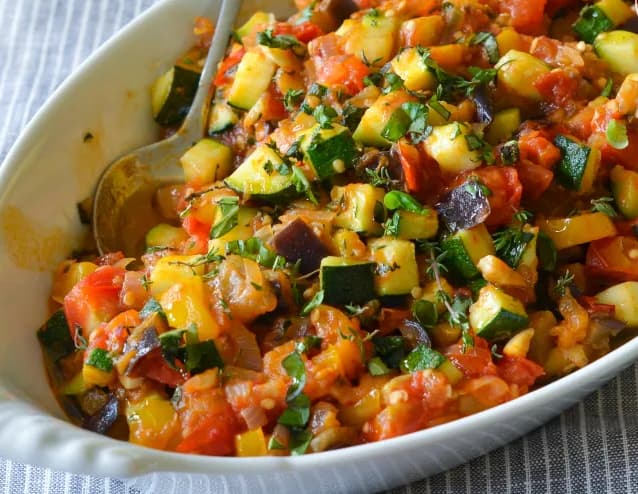 8 Likes
next page →
Help cover Hungry Onion's costs when you shop at Amazon!