Quick Poll: How do you feel about Teflon/Cooking Health Concern?

Hi all. Recently I have many cookware evaluation/purchase decisions which Teflon comes into play. For example, my current decision to purchase an electric kettle. I personally do not believe there is a huge health concern with using PTFE/Teflon, but I am also trying to reducing its usage in my kitchen. Just want to do a quick poll and see how you all feel. Many thanks.

The temperatures above are approximations. Hopefully, one of the choices is close to your personal opinion.
Feel free to elaborate more below.

First, love the poll. We should more of them (I lurk on a non-food forum which regularly has them)

And second, I voted no health concerns, which is an accurate assessment of my view. But then, this is the first I’d heard that there may be an issue with Teflon (or not)

There is definitely studies about Teflon can leak into foods. That being said… many things leak into foods too. Iron leaks from cast iron cookware. Chromium leaks from stainless steel cookware…etc. I think the idea of ingesting Teflon particles worry some people. My Zojiruishi rice cooker has PTFE coating for the cooking surface.

I think PTFE actually starts breaking down somewhere around 400F. This shouldn’t be confused with safety, given frolics and inattention with heat settings. If your kettle can’t go >212F, you should be fine.

But that’s just the PTFE itself. I think that the precursor chemicals, the byproducts, and the recycled linings are unsafe in the general environment…

and the recycled linings are unsafe in the general environment

True. That is a concern too. As for the poll choices, in looking back I probably should have stated “approximately” for the temperatures. I don’t really mean exactly 500 or exactly 212.

I voted not safe at any temp for reasons Kaleo referenced.

I’m split in between using non stick for certain delicate things and not to own any at all.

Currently I own 5 non stick pans and use them weekly.

If I felt my carbon steel pans worked a bit better for eggs and starchy things, I would throw my non stick pans out tomorrow, but I don’t.

I also am not so sure raw carbon steel pans are far more healthy to cook with than non stick pans since I haven’t been able to see studies concerning digesting old carbonised high heat burned oil which is what the seasoning in a carbon steel pan consist of.
I have an idea, that this could be just as dangerous to digest as digesting fluor PFAS particles.

But nobody really knows and I haven’t found any articles, studies and tests concerning this.

but the problem is, French, Nordic and American detailed studies have shown essentially zero PFOA on/in/around finished PTFE products.
the French found PFOA in the single digit parts per billion - which they attributed to “noise” in the measuring systems.

PTFE is very dangerous to birds when overheated.
PTFE is dangerous to humans only in a kitchen the size of a bird cage with all windows and door sealed.

if you’re worried about this stuff - do not consult the data on USA “approved” children’s (flame resistant) sleepwear. it’s totally loaded with PFOA.
PFOA goes away very rapidly on “hard goods” - it stays, forever, on sleepwear.

PTFE is dangerous to humans only in a kitchen the size of a bird cage with all windows and door sealed.

You left out that PTFE is prevalent in “stain resistant” carpeting.

I honestly have bigger things to worry about in life.

For those of you who are concerned, I envy you, as you obviously have less problems to concern yourself with than I do.

Well done in life. Kudos to you.

There is plenty of pubmed literature that one shouldn’t heat teflon above 500F (which already pushing it, so most likely 400-450Fis on the safe side). 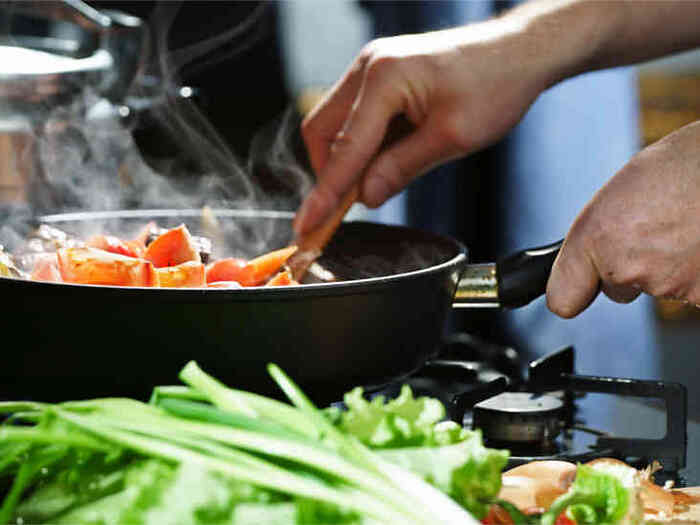 Nonstick cookware like Teflon is popular all over the world. Some sources say this cookware is safe, while others link it to dangerous health conditions.

And teflon is a good way to kill your canary as the teflon fumes are particular to a number of different birds.

I also am not so sure raw carbon steel pans are far more healthy to cook with than non stick pans since I haven’t been able to see studies concerning digesting old carbonised high heat burned oil which is what the seasoning in a carbon steel pan consist of.

It is a good question.

I voted “not safe at any temperature”, but do use a nonstick pan from time to time.

There is an implicit confirmation bias in the questionnaire: people who like to use nonstick cookware are more prone to vote “safe at high temperatures” even though deep down they might believe it can be harmful.

I know it is still likely harmful, but I’m willing to take the risk knowing I don’t use nonstick cookware a lot (on average once a week for 10 minutes).

What’s worrying is the delay in acknowledging harmful effects, for legal and compliance reasons. See the movie Dark Waters on the DuPont case. This could suggest that even though at the moment tests may indicate the current generation of nonstick cookware is safe to use, it can easily retroactively be characterised as harmful.

True. That is a concern too. As for the poll choices, in looking back I probably should have stated “approximately” for the temperatures. I don’t really mean exactly 500 or exactly 212.

A study stated if the PTEF utensil is overheated at over 360ºC, meaning if you heat an empty pan for a while, the chemical leaks to the food. But it seems so far, the problem is less for us than the environment. It’s usage is banned in European Union since July 2020.

The nonstick coating is made from a chemical called PTFE, also known as Teflon, which makes cooking and washing up fast and easy. Health agencies have raised concerns about the compound PFOA, which was previously used to make Teflon. However, Teflon has been PFOA-free since 2013.

So if you have the older Telfon, maybe you should be more concerned. But generally the studies said PFOA were “safe”.

It’s usage is banned in European Union since July 2020.

Do you mean Teflon/PTFE stovetop cookware have been banned? I still see other appliances like Zojirushi rice cookers

Yeah, you can report them then. Either they have a version with a non PTFE non-stick coating. Or they are just illegal. I believe it’s more the first case.

I’m not at all concerned with the health consequences of cooking in Teflon-coated pans, as long as they aren’t heated above ~400°F, but I am greatly concerned about the costs (direct and indirect) and negative externalities associated with their manufacture. Even the successor to PFOA, GenX, is not deemed safe.

At this point I have enough cookware to last several lifetimes, so I do not anticipate buying anything else. It’s for these reasons I am particularly conscientious about caring for my nonstick cookware, as I don’t place to replace it.