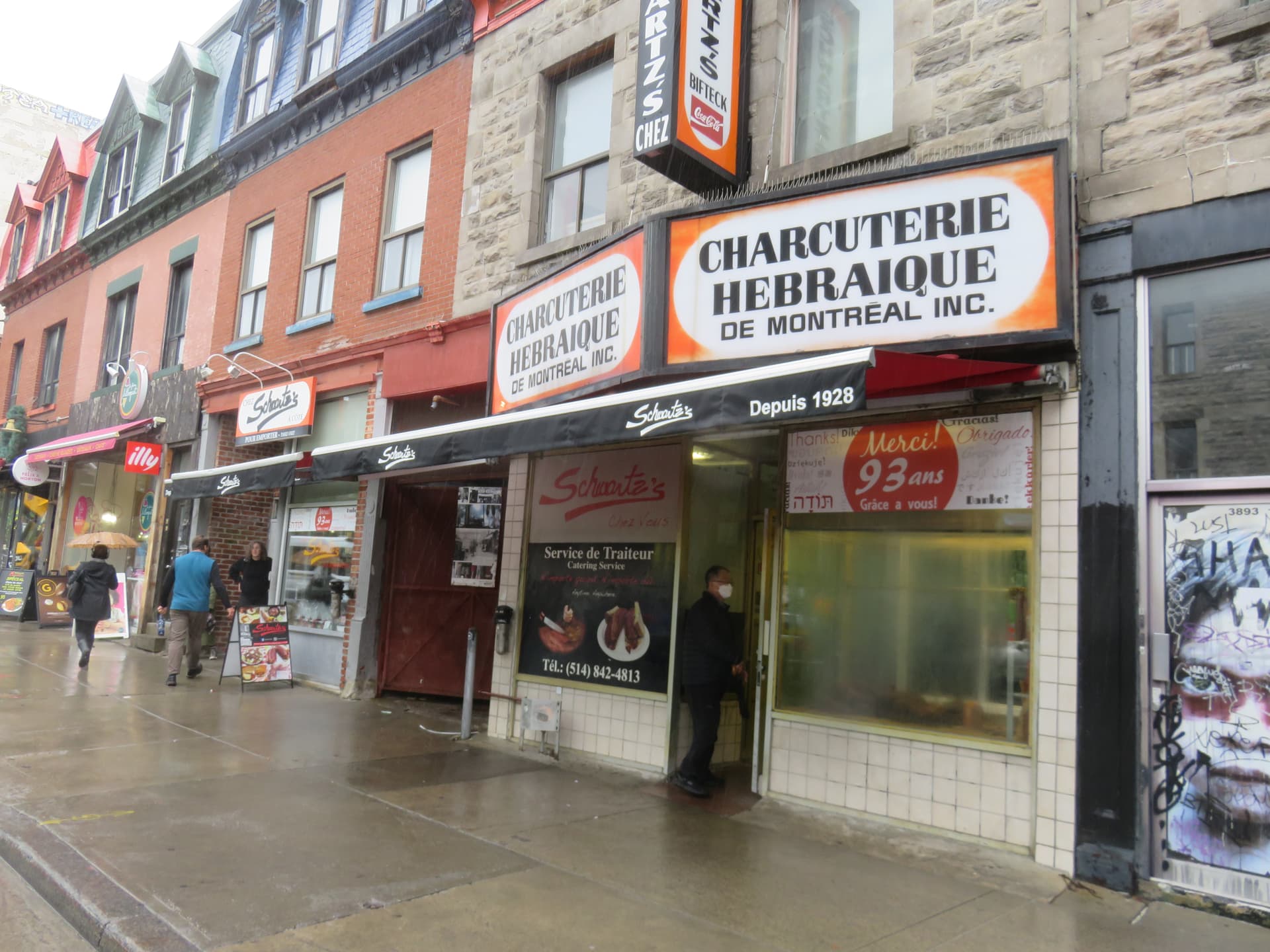 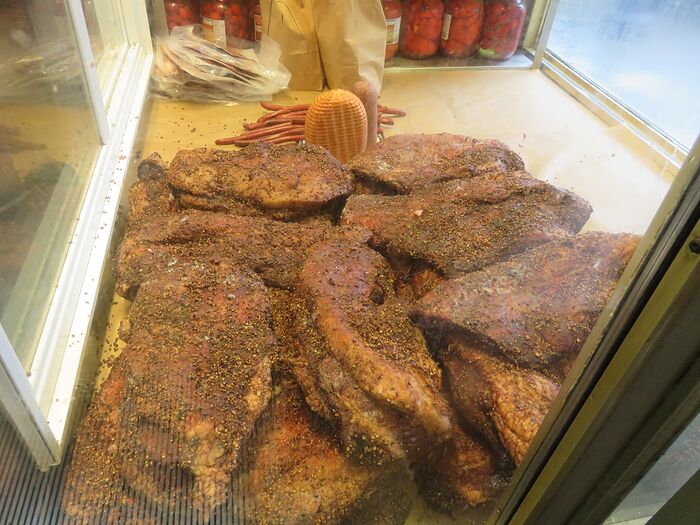 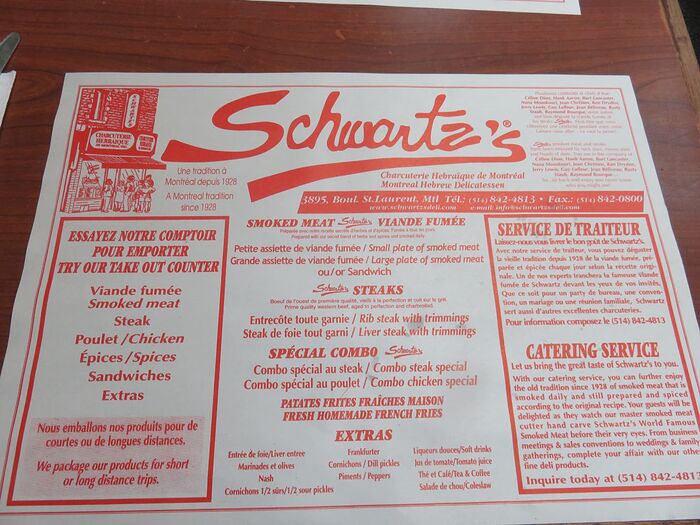 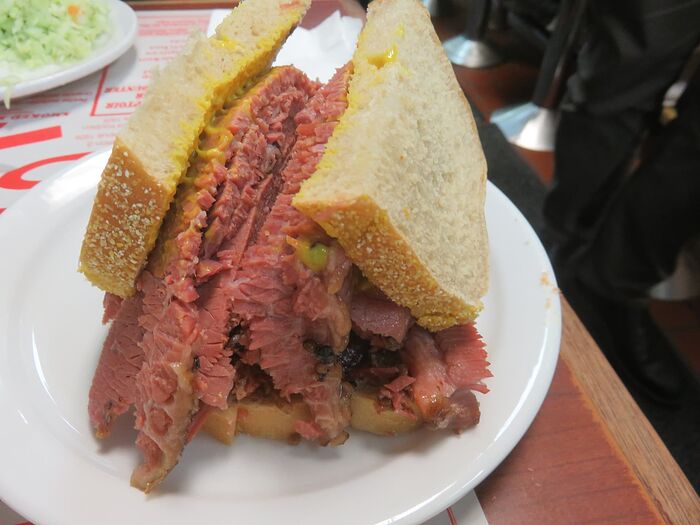 Schwartz ( lunch ) - This could be the easiest and shortest review I have made of an eatery! Not much more can be said about this iconic ’ Montreal Smoked Meat ’ institution except, for me, I found this place ho-hum and over-rated!
Considering we have here in the GTA, ’ Similicious ’ offering identical taste profile, generous portion, flavourful, moist, juicy and semi-fatty briskets; the original, lean and dry Schwartz version was a total anti-climax! The servers never bothered to ask patrons about their fattiness preferences?!

Joe Beef ( dinner ) - Once again, trying out another iconic Montreal institution, this time the infamous ’ Temple of Gluttony ’ Joe beef. Serving up unpretentious, hearty and luxurious food, steeped with cholesterol, in a cramped, dark and rustic space. One could smell the arrival of each dish by the aroma of the ‘excessive’ butter and cream used in each creation. There is no doubt the food is super rich and delicious. By looking around at what other patrons ordered, if one is into this sort of occasional ‘artery clogging’ suicidal meal, then this place is indisputably THE place for you!

Based on quality/quantity and price ratio, food is definitely on the high side! My dish of ’ Crispy Veal Sweet Bread in a rich, creamy lobster bisque sauce ’ ( 4 small chunks of lobster meat, a few half cut mushrooms, bits of crispy lardons and served with sea-shell pasta ) all housed in a smallish skillet, came at a whopping $80!
My desert ‘Tarte fine au Pomme’ was nothing like what I had in Paris/France. Crust was soggy, overly chewy and lacking buttery aroma. Apple was mushy and the entirety served with ‘commercial like soft ice-cream’. At $19 it was $7 more than the gorgeous, bigger and tastier ‘Tarte Tatin’ I had in Quebec City a couple of days later!
Considering the difficulty in securing a priced table at this place, I was expecting the food be packed with wow-factor! Sadly, this was not the case. Instead of ‘wow’ I’ve got a few ‘woe’ instead…though overall, the meal was still delectable and enjoyable! However, IMO, Toronto’s ’ Dreyfus ', opened by an ex-sous of Joe Beef offers less heavy, expensive and more delectable food. 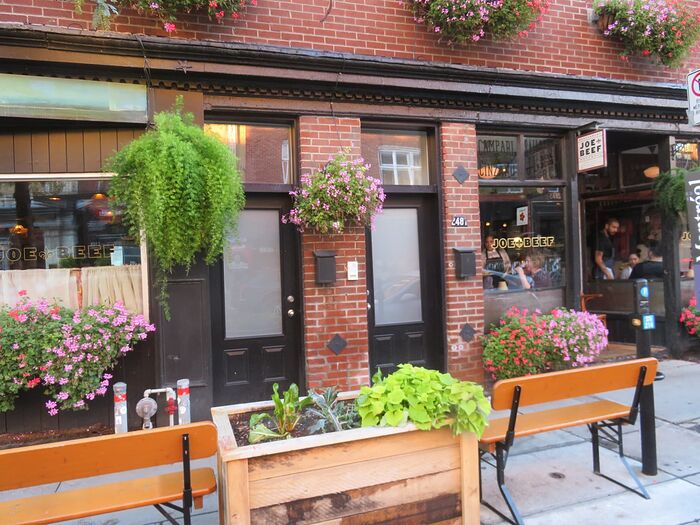 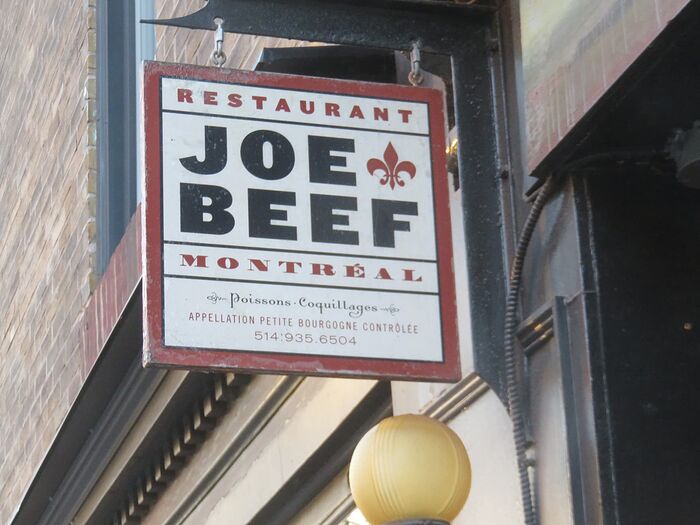 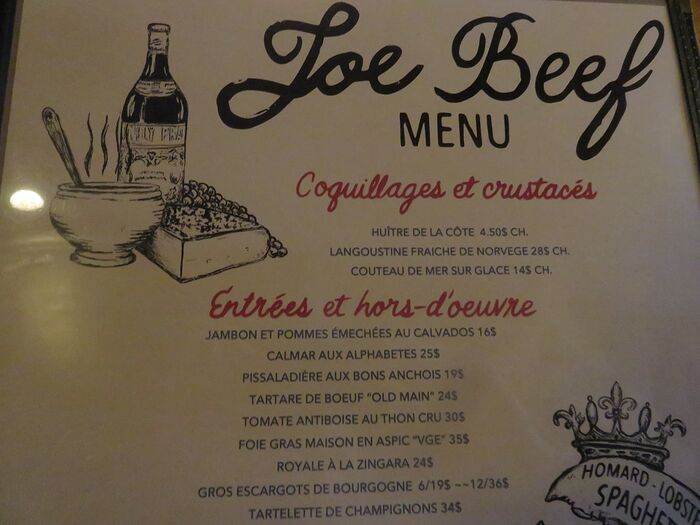 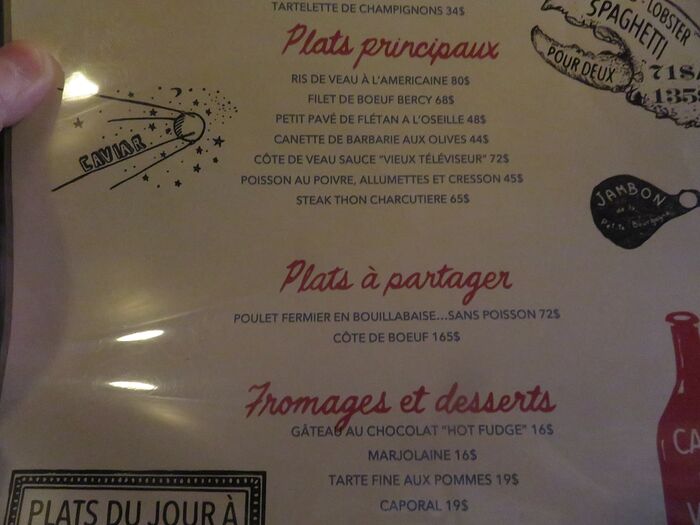 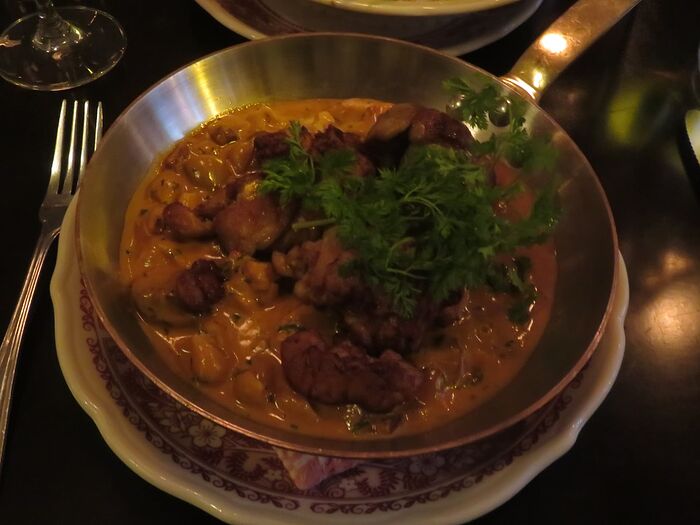 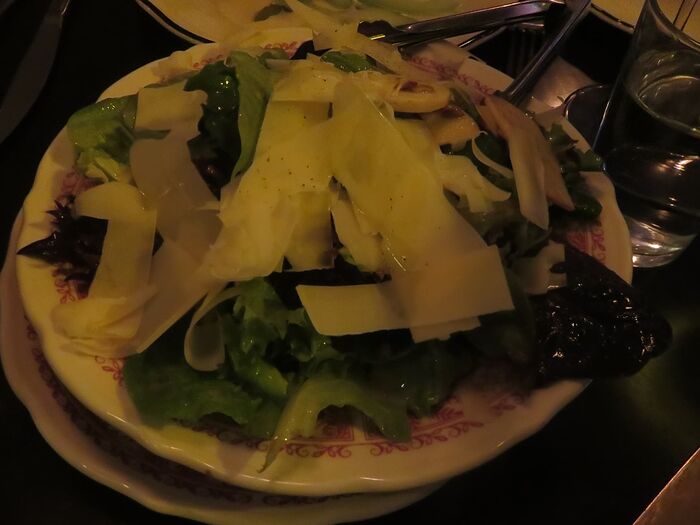 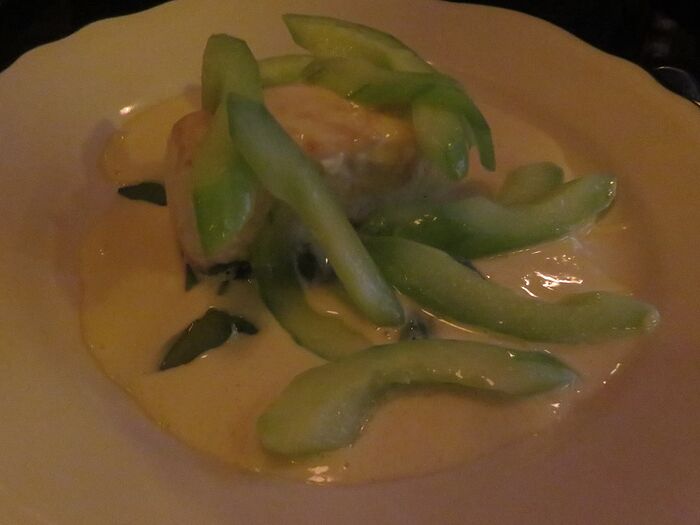 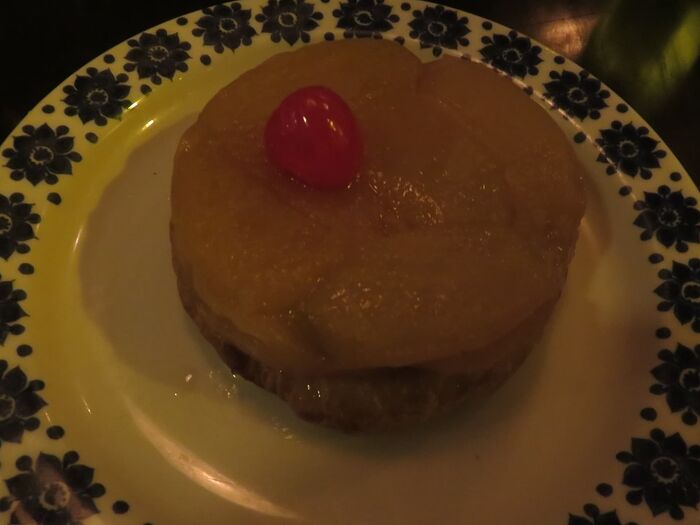 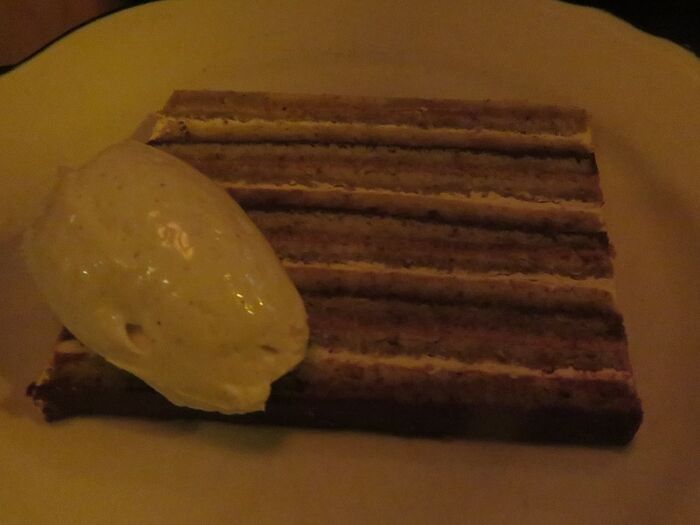 I’m wishing you had kept your plans to come to Paris this month. We spent the month of May in Montreal (as you know from my posts) & are now spending a month in Paris. It would’ve been nice to compare notes. My conclusion on Joe Beef couldnt be further from yours, but that might’ve been what we ate or just different taste buds. Having had 2 or 3 quenelle orders in the past week, I think Joe Beef’s version is one of the better I’ve had. As I said in the Joe Beef thread, that includes some experience in Lyon & at Le CouCou in NYC (when David Rose was in the kitchen). The other dishes my wife and I ate at our 2 meals at Joe Beef were excellent as well (see the JB thread). As for the cost, I have to admit that I see your point. If not for the U.S. dollar exchange rate, maybe I would’ve been more bothered.
As for Schwartz’s, we’ll have to disagree, but only somewhat. Your criticism of the service is well taken, as I watched that happen around me. The old guy (that means older than me) behind the counter seemed to want to include me in his conversation with the local guy next to me, who apparently is there daily. It got me some better service, like asking what I wanted vis a vis fatty. The meat itself was every bit as good as Katz’s Deli, 2nd Ave Deli and the other good places in NYC. Of course, its not the same meat, but I enjoyed it as much as pastrami or corned beef. And my sandwich was bigger. And I got one to go for later. It was bigger as well.
Again, I make no judgment but am sorry about your experience.

Sadly, we decided to cancel our PARIS/Bordeaux/Champagne trip two months ago!! Sigh!
My daughter went to Paris and Barcelona and got Covid…forced to stay in hotel for 4 days before ACT results were negative. Same with the son of my travelling companion. Even worse! He caught the bug in San Sebastian!! Have to stay in hotel room and watch Spanish TV whilst friends were doing tapas crawl and munching food from a couple of Michelin stars! Besides, that was before the lifting of restrictions by the Canadian government! To play safe, we need to buy both travel and Covid insurance! For our 10 days duration, those two insurance policies alone cost more than the airline ticket!!