Midweek field trip to Fall River to visit the much-touted Portugalia Marketplace where we were soon in sensory overload. Handsome open space, hundreds of tins of sardines, tuna, mackerel all laid out like gems. Superb choices of Portuguese olive oil at good prices. Tempting sweet deserts 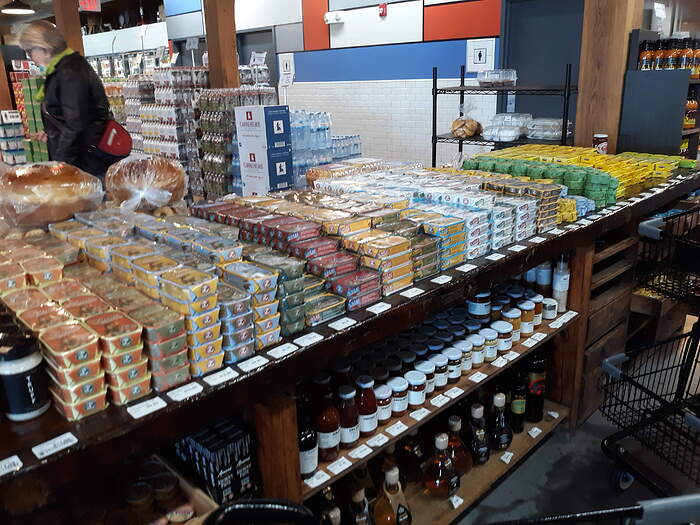 20220420_1156504128×3096 1.02 MB
and sweet breads. Prepared foods. Olives. A separate room where you can watch the bacalhao being processed through big glass wall. Frozen shrimp as big as your head. Well, not your head, but they were BIG. Frozen octopus to take home and cook. Wine shop. Nuts, legumes, dinnerware, cookware. It goes on and on. Not inexpensive, but the real deal from Portugal and the Azores, lovingly displayed. 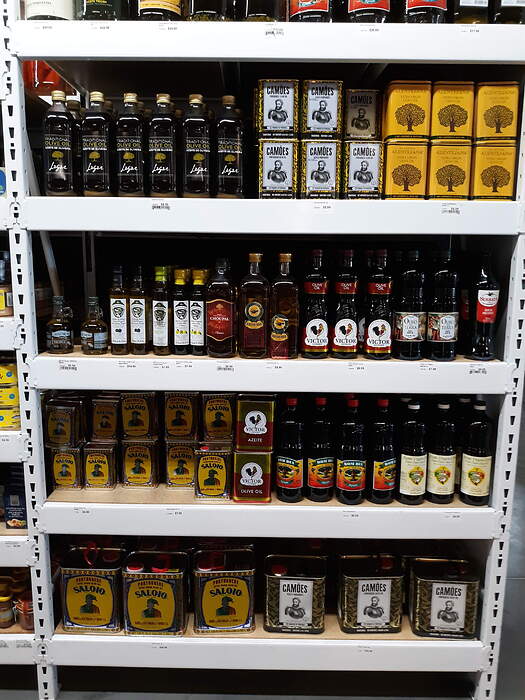 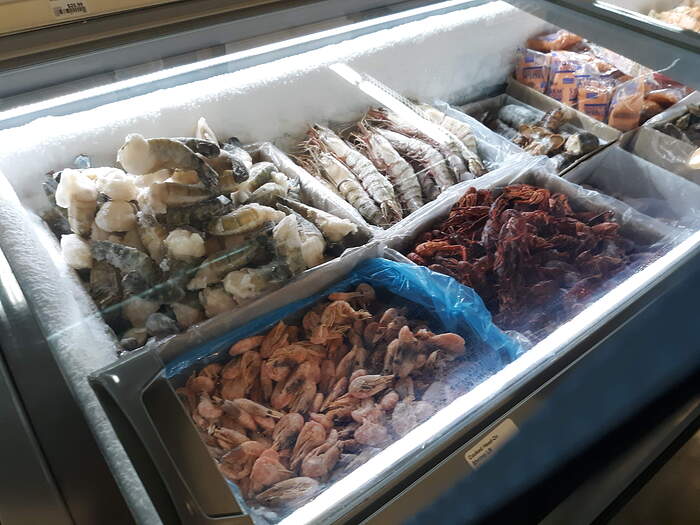 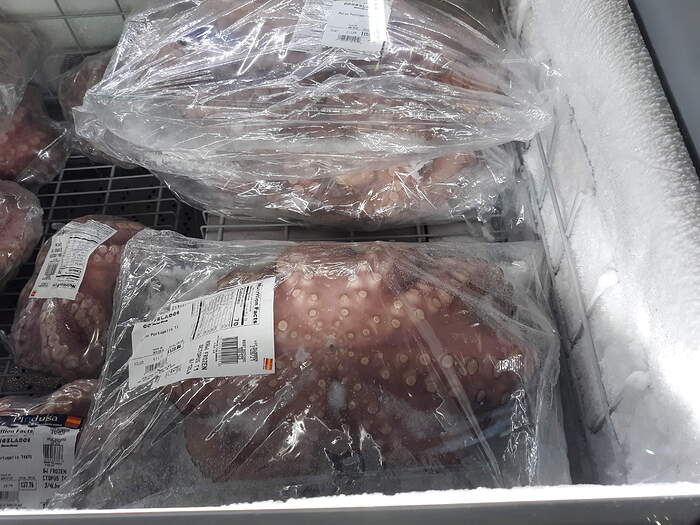 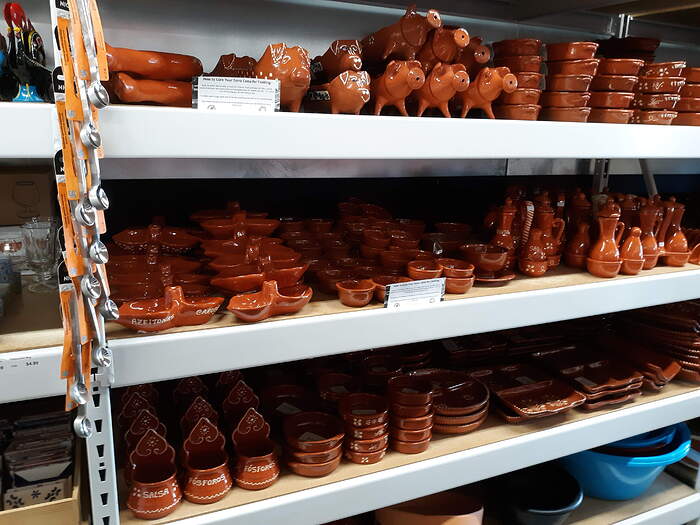 Once the site of a sprawling textile mill, the space has been lovingly restored to offer a one-of-a-kind shopping experience. In addition to fresh fruit and produce, specialty groceries and various meats, cheese and seafood, Portugalia Marketplace is the home of Castas & Trigo, their beer, wine, and spirits shop stocked with Portuguese wines. Ponto de Encontro, offering espresso, cappuccino, pastries and a variety of fresh sandwiches. And O Fiel Amigo, a temperature controlled room offering a large variety of the finest salt cod available.

Top off your visit with a stop at nearby Sam’s Bakery. Excellent middle eastern specialties like zaatar bread, spinach and meat pies and passable pita bread (too thick for my tastes).

Thanks for a great find! I often travel to RI, and that’s an easy stop-off.

We’ve passed through Fall River twice in the last month and each time, I mentioned Portugalia to the guys. We’re down in RI again this week. We’ll attempt to stop on Sunday but in any case, thanks @SuzieCK for the confirmation that it’s a must-see/stop.

Savored every word of your enticing report over my morning coffee today, @SuzieCK. Thank you! Your photos help communicate what looks like a tremendous selection.

On a trip to Portugal a few years back, I brought home cans of Santa Catarina tuna from the Azores and chocolate from Chocolateria Equador. I’m delighted to see on the Portugalia Marketplace website that they carry both. Your report has me daydreaming about possibilities of other treats.

What an amazing report and thanks so much for all the great photos! I had read about Portugalia before but your pics made a much more compelling case for making it a priority to get there!! And I know where I can get lunch too, thanks to you…

Hmmm…my sister wants to go antiquing soon in the Middleborough and/or New Bedford area. I might have to ask her to detour to Fall River as well!

@SuzieCK - what was the atmosphere like at Portugalia? Was it busy with locals or did it seem touristy to you, or a mix of both?

I got an interesting (and rather frustrating) response from my sister after sending her a link to the market’s website saying “it looks like it’s for tourists” and wondering if “real” Portuguese in New Bedford and Fall River shop there. However, I’m wondering if she’s thinking it’s “touristy” because of the large space and open aisles with tons of products vs. a small Mom and Pop store with everything crowded in on top of itself. (Note - she’s NOT a “food person”, per se, so her interest in exploring shops like this is much less than my own.)

My response to her was it’s essentially been around for 25+ years, according to an article in Saveur noting it as the best Portuguese market in the U.S., starting out in the father’s garage as a very small import business for the locals, and it does booming business online shipping Portuguese products across the country to individuals who can’t get the items they carry locally to them. 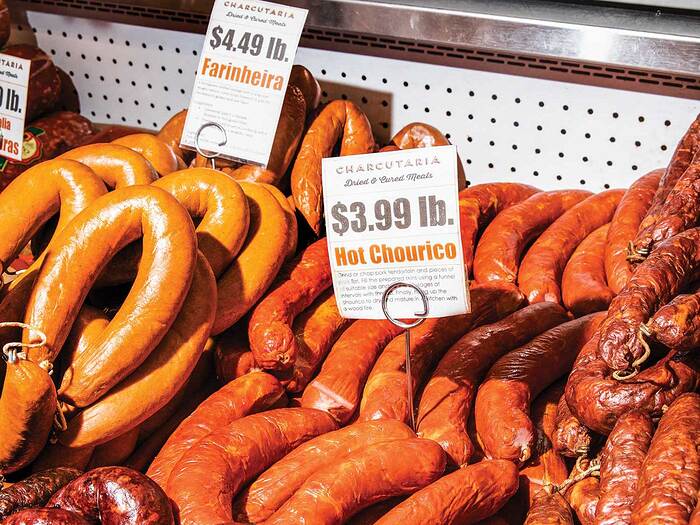 Portuguese specialties including conservas, olives, and salt cod have found a home at Portugalia Marketplace in Fall River, Massachusetts.

Thanks for posting that article LW, it and the linked pice about Portuguese essentials were a good read. I’m interested in @SuzieCK’s response but my (admittedly dated) knowledge of that area is that (a) it’s not very touristy in general and (b) there are tons of locals from the Azores, Cape Verde and mainland Portugal (or descended from them) who would patronize Portugalia.

Here’s an article from Leite’s Culinaria that speaks to the heritage of Portugalia Marketplace. Reading this is what originally put the destination on my radar.

(a) it’s not very touristy in general and (b) there are tons of locals from the Azores, Cape Verde and mainland Portugal (or descended from them) who would patronize Portugalia.

That’s exactly what I was thinking - the area has been heavily Portuguese-based for many many years. So it makes sense that the Market would start locally and cater to those locals.

That article from Leite’s Culinaria says exactly what I noted, @tomatotomato

“The credit for the store goes to Michael Benevides, 44, a second-generation Portuguese businessman. Convinced he could grow the family business from its original location in the family’s garage, which had served only the local Portuguese community for 25 years, he also convinced his father. In no time, Benevides transferred the business to a larger warehouse, and, finally, to its present home in a former textile factory.”

I’ll chalk it up to, despite my sister being in marketing, not knowing about the location from a cultural heritage viewpoint (although she has also lived on the South Shore for many years).

Another good read, thanks TT!

not knowing about the location from a cultural heritage viewpoint

Fair point. And to be fair to your sister, emporium-style “gourmet” shops are often more expensive than they are useful. Doesn’t appear to be the case here though (said the food geek who lives for this sort of thing).

I’ve nothing useful to contribute, except to say “What a great thread!”

or did it seem touristy

(a) it’s not very touristy in general and (b) there are tons of locals from the Azores, Cape Verde and mainland Portugal (or descended from them) who would patronize Portugalia.

That’s exactly what I was thinking - the area has been heavily Portuguese-based for many many years. So it makes sense that the Market would start locally and cater to those locals.

Just my anecdotal experience…Fall River is not exactly tourist central. The businesses (and those in neighboring New Bedford) could probably use all the dollars, tourist or otherwise, as they can get. They’ve always been blue-collar towns when I was growing up in RI and we would head down to Horseneck. @LindaWhit If your non-food interested sister is worried about the influencer set in Fall River, I would be quite surprised to see that there.

Is something being touristy automatically bad ? There are places which might be quite popular with tourists but still can have a lot of relevance with locals

Not for me, no. Unless they sell cheap tourist crap, which certainly isn’t the case with Portugalia.

I honestly have no idea why she claimed that, based on the pictures? I said I’d still go even if she didn’t want to.

@LindaWhit If your non-food interested sister is worried about the influencer set in Fall River, I would be quite surprised if that’s what you see

Yeah, her comment was out of left field. I’ve lived in MA since 1989. She’s been here longer. Pretty sure she knows Fall River isn’t a tourist mecca, so her comment to me was rather confusing. Will be interesting to see if she chooses to go with me.