I never had black pepper cheese on a cheesesteak . . . never even thought about it

Where I’m from a “grinder” is essentially a hoagie that spends a few minutes in the pizza oven. Not a fan–I like my cheesesteaks hot and my hoagies cold. Then again, there is the “cheesesteak hoagie.” When I worked at a pizza place in high school these were fairly popular, though I never understood the attraction.

A grinder in KC was a whole roll with the center bored out, then filled with meatballs or Italian sausage and sauce. 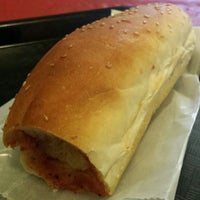 Sounds better than our version of a grinder,

About grinders: we know sandwiches are nothing if not regional. When I lived in North Dakota, there was a place actually called The Grinder (college-town hangout). Their grinder line-up included a meatball version. A fan favorite included what they called the The Garbage Pail–made up largely from scraps that had accumulated recently around their cutting stations and under prep racks.

The Garbage Pail–made up largely from scraps that had accumulated recently around their cutting stations and under prep racks.

So steak, onions and cheese. Do they eve offer mushrooms/peppers in these places? Before I drive out to Philly, I better get some specifics.

They definitely offer mushrooms and peppers . . . Many natives consider them standard issue.

I would, too. I guess if some add cheez whiz, I could expect something normal on my Philly.

Thanks for the reply.

Transparent. Lol. The local Wegmans here sometimes sells prime rib sliced for Shabu shabu , almost shaved, and it works great. Thing is, you can’t count on them having it, because it’s fresh in the meat case, so when I see it, I buy it and freeze it. Not being from Philadelphia, but having worked there and having been taken to one of the original temples of cheesesteak for lunch, I have to say I don’t chop mine up as much on the grill - and — sacrilege— I don’t use cheese squirted out of a can. To chop into the mix.

I’ve seen the thinly sliced rib-eye at Wegmans (and Giant). I’ve used them for cheesesteak, but they probably work better for shabu shabu. It’s almost impossible to separate that clump into its thinly shaved ‘slices.’

You can have some clumps in the cheese steak. I chop a little with my griddle spatula to mix in the onions. Just NO CHEESE WHIZZ - whizz all chopped up with the meat and onions, you get something like Gerber’s Baby Cheese Steak. Or cheese steak spread. Ewww.

I get this feeling that the Whiz isn’t even very popular in Philly. TV must have played it up. I don’t seem to know anyone who’s a Whizzer.

I saw the grill guy put it on my order with my own eyes. I knew then that I was in trouble.

Is provolone the most popular cheese to use?

Most places use American (white) as the default, although provolone is always an option. There’s even one local place that defaults to mozz. But don’t pull a John Kerry and request Swiss

I use provolone myself, not that that counts for anything.