I’m not sure anyone not raised on mutton can eat it.

In the UK, “lamb” usually refers to an animal under one year old. Hogget (which is hard to find), is one to two years and mutton is anything over two years. I would always buy hogget as & when I can find it as you get a much fuller flavour than lamb (which, if you’re not careful about source can be quite bland), but is still versatile in its use, whereas I’d really only use mutton for long cooked casserole dishes. Mutton chops would be tricky (and I’ve not had success cooking them). There’s a basis for the British expression “mutton dressed as lamb” - https://www.phrases.org.uk/meanings/mutton-dressed-as-lamb.html

There’s a farmer at my local farmers market who sells it. We were there this morning but only bought lamb chops and lamb neck fillet. The latter is for a Lancashire Hotpot which we might well have used mutton for but they only had roasting joints.

One of my favorite expressions!

No reason to question either of you, was just stating my shared experience. I would like to actually try mutton now that I know I haven’t!

Figures Harters likes mutton. I do like the “mutton” chop at Keens as it is lamb. But actual mutton is just way too strong for my taste. The smell is even a bit much for me. I also can’t abide truffles. Just too much taste and smell. Like old musty moldy socks to me.

Truffle is certainly something where less is more for me.

I’ve never quite seen the point of truffles.

But then I’ve never quite seen the point of lobster. Give me a crab any day. But that’s a whole different conversation.

Then I suppose lobster with truffles would essentially be the epitome of an otiose dish?

By the way, I agree with you wholeheartedly on both the lobster and truffles.

That said, every once in a while I will crave an egg salad sandwich with some shaved white truffles on sliced Japanese milk bread, but only then, and never any other time.

ou should try a good lobster role in New England

It is not for the want of trying.

I just don’t find it a particularly tasty bit of seafood.

I like lobster very much but have given up on buying lobster rolls. Lobster meat may have been frozen or contains only claws and knuckle meat. Or worse, picked days earlier. So, the only lobsters I eat are the ones I cook at home. Hard shells from a lobster pound only. Harters- don’t bother trying lobster again. You don’t care for it- and neither do some of my family members.

A role like the lobster in a Christmas pageant? I also prefer crab to lobster. Much sweeter meat. Also much more work.

I was never a fan of Lugers. I’ve had much better steaks at Ben Benson, Sparks, etc. 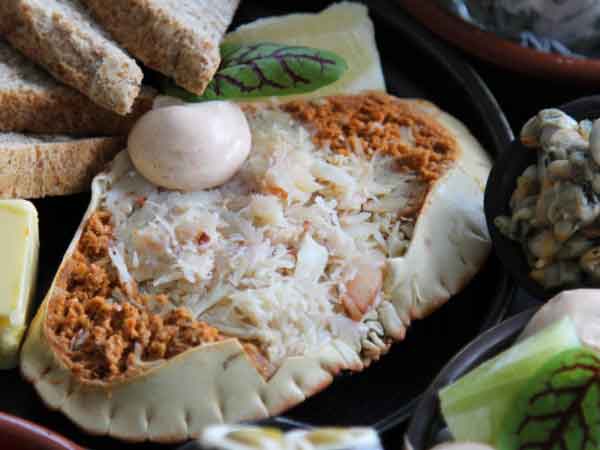 What are the native crabs of Britain?

I had to Google. Although we have a number of native crabs, the one offered for eating is the brown crab (cancer pagurus). I’ve no idea whether the other natives are regularly eaten (doubtful as several are very tiny beasts).

I love lamb but mutton is a whole other matter. I’m not sure anyone not raised on mutton can eat it. It’s overpowering. Practically tastes like it’s gone rancid to me.

I had mutton stew at a Basque restaurant. I couldn’t eat the mutton but the veg and broth were wonderful.

Forgive me, but I don’t understand why that is a contrast.

We would have expected Hawksmoor to import Scottish or Irish beef to New York as Smith & Wollensky brought American beef to London.