How does this place not have its own thread yet? It has been mentioned in several others, but does not have a dedicated space. Funny how the pizza is actually from Carmen’s, but EVERYONE just calls the entire business Pete & Elda’s. I reviewed it ages ago and ate there last night for the first time in about two years.

It was never a summer without a visit to this place when my dad was alive. Was good being back there again. Only an hour wait too! Ah, the benefits of going before Memorial Day. The waits can be upwards of three hours during the summer. I remember one time, my dad brought us there on a Monday night in the summer two or three years ago thinking there would be less people. Ha. There was still a two hour wait.

Aside from the famous thin crust pizza, they actually have decent entrees as well. I think last night I saw more meals than ever before. Usually it is 95% pizza, but I saw lots of pasta and even a few steaks. But I only go 2-3 times a year, and that prevents me from getting anything other than the pizza which we drive 40 minutes for.

Drink prices are cheap and I don’t think food prices have changed in at least 10 years. Pitcher of beer was $12 and it was sizeable. And I may or may not have imbibed a couple of Jacks on the rocks while waiting that hour in the bar area. It was Justin’s first time, so he, my mom, and I split a XXL with half hot peppers and half pepperoni and an XL with half meatball, half mushroom. Delicious as ever. Was not a fan of our calamari appetizer. Was very generic and had no flavor. I remember their fried green beans and zucchini fries to be outstanding. Just a poor choice last night. 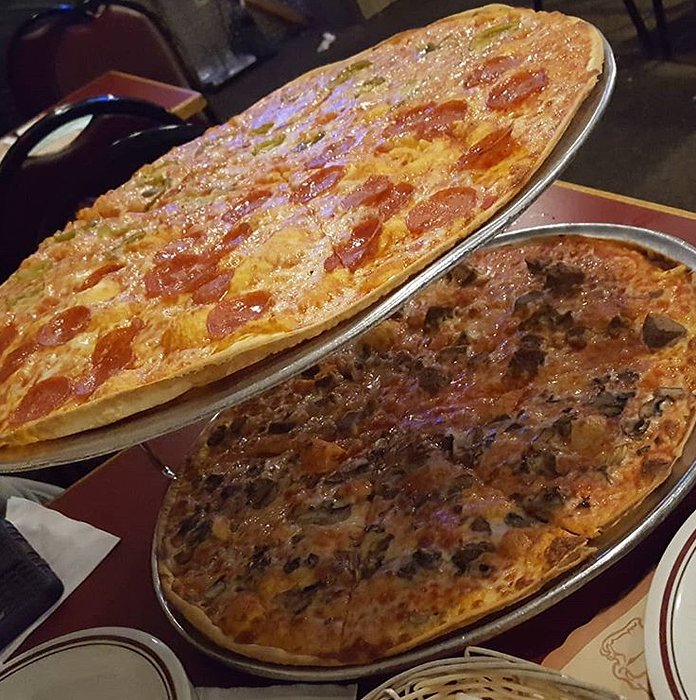 This could never happen, but I’d love to try a blind taste test to see who would come out on top (Pete and Elda’s, brothers or vals…the battle of the thin crust)

Agree on the calamari there. Disappointing considering how much they do right there. Usually grab an antipasto salad and cpl xl pies one with pepperoni and enjoy life. This and deninos in Brick are my two spots locally that are
Above and beyond anyplace else nearby.

What?!?! No XXL plain pizza for the t-shirt?

Not yet. Without beer and apps I most certainly could pull it off.

This might be a good place for a HOdown.

Then you need to go to Rosies in Point Beach, some of the Best pizza I have ever had anywhere.

I concur!! I’ve never been a big fan of Pete & Elda’s or think crust pizza in general for that matter. No doubt this place is beloved and as Greg mentions the line around the building proves that. Glad Greg enjoyed but I do find Rosie’s to be much better as I do Frankie Feds as well. Just my $ .02

Exactly. I rarely have complaints.

One time, I ended up getting their French Dip sandwich because I was sick of pizza. It was excellent. Came on garlic bread with melted provolone. Mmmmm.

Hell, they used to have a killer scungili marinara. Hardly anyone serves that anymore.

Normally, I prefer a thicker crust pizza. But a few times a year, I just get that craving.

Gotta hand it to them on consistency. I have been going there since I was like 5 years old, and it is the same damn pie every time.

Gotta hand it to them on consistency. I have been going there since I was like 5 years old, and it is the same damn pie every time.

Yes, but unfortunately they switched from Coke to Pepsi recently (within the last couple of years since I’ve been going there since, gulp, 1960!) That’s my only disappointment. And now because it’s so popular, I only go at off times, and even thene there’s a wait! But I do love my Pete & Elda’s. Heck, I remember when they had the organ behind the bar! (Waaaay before the remodel!)

I’ve seen many people do it. Some who really were surprising. We once took my daughter’s friend … at the time I think he was 17. Ate the entire XXL then had a few extra slices and some fries. All in about 15 minutes

From what I’ve seen they don’t pay too much attention so if a piece or 2 goes missing it’s no big deal.

We used to go with my dad’s friend and his family. Their son too was 17 at the time. He would eat a basket of garlic bread, drink a chocolate milk or two (eww right?), then scarf down the XXL, probably with toppings. He was as thin as a rail.

Then you need to go to Rosies in Point Beach, some of the Best pizza I have ever had anywhere.

I concur!! I’ve never been a big fan of Pete & Elda’s or think crust pizza in general for that matter. No doubt this place is beloved

Sorry, but imo (I’m ducking already) Pete & Elda’s (and Vic’s in BB, for that matter) fall into the ‘people love it for the nostalgia’ category. Same with (I’ve been ducking on this for years) Rutt’s Hutt up in NNJ. I’ve been, I’ve gone with an open mind and excited to see what the fuss is all about, and I’ve been disappointed by the FOOD. I love a good dive, but if I’m going to do more than drink at one, I don’t want to shake my head wondering why there’s an hour wait at the end of April.

My top three pizzas in NJ are Rosies, Delorenzos and Frankie Feds. I like Pete and Elda’s every now and then for a change of pace but it’s not as good as the top 3. They have a liquor license which sometimes matters depending on who I’m with since the top 3 don’t.

“Tomato Pie” of south west Jersey fame? If so when my son started at Rider U, I sought out Delorenzo’s Tomato Pie because of the reviews on here and while it was good, I didn’t find it as legendary as others seemed to.

Right now for thin crust I put Frankie Fed’s on the top of my list with Rossie’s being a close second. The problem is I’ve only had the sausage pie at Frankie’s and I have NOT had the sausage pie at Rossie’s, so I’ll admit I’m pretty much addicted to Frankie’s and have to try the equivilant at Rosie’s before I can declare an official thin crust pie winner. (also a pretty big endorsement for Frankie Fed’s Shrimp Parm Sandwich…f’n delicious!)

Delorenzos, originally of Hudson Street in Trenton and now in Robbinsville. There are other places called Delorenzos opened by other family members in the area. You need to go to the “right” one but I think the pizza is excellent. You know you’re at the good one if the pizza is cut in an unconventional way. 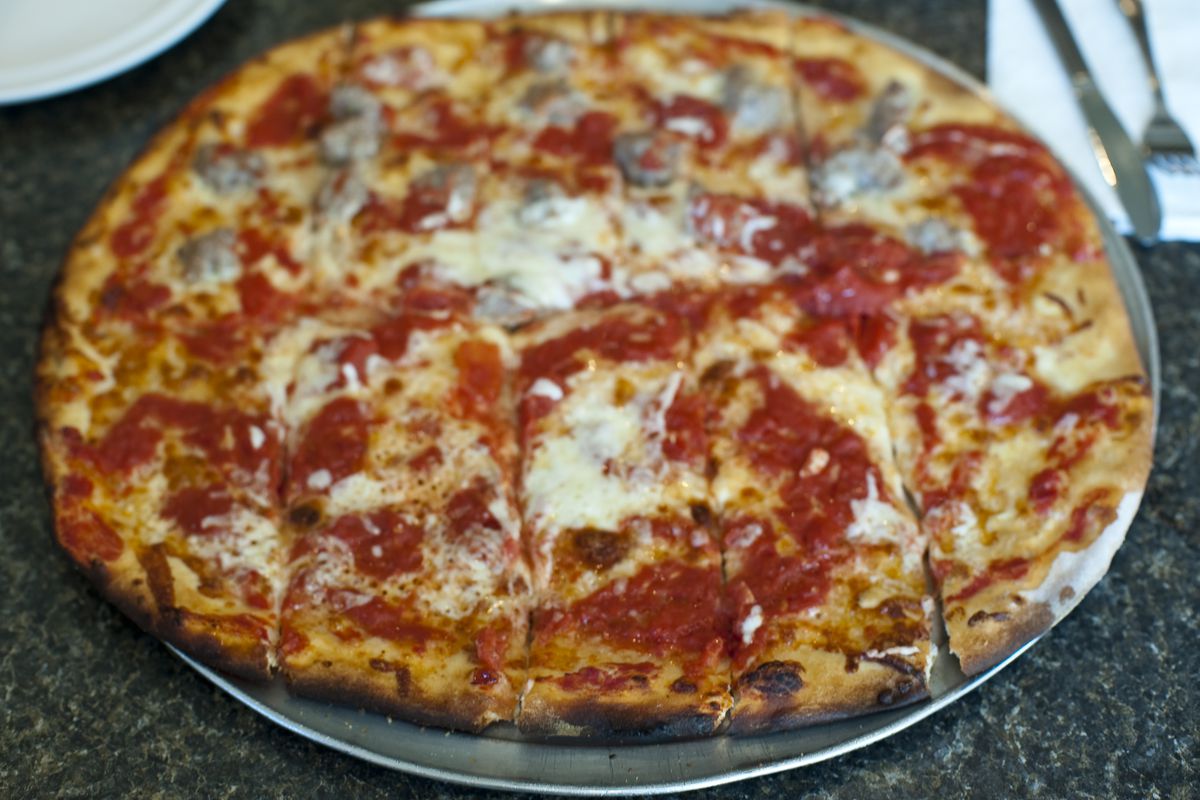 Am I the only one who thinks their pizza is totally meh? Not a fan of the cracker crust. Gets soggy too fast and it has no chew.

(Edit: Apparently others in the thread agree!

Don’t mean to yuck anyone’s yum, the best pizza is the one you enjoy.)

Funny before I finished reading your post I noticed the odd cut of the pie and thought to myself, nope that’s not the one I went to. Interesting…now you have given me a new challenge to find the “right one”.
On a side note I was thrilled when I learned there was a Tastee Sub’s up the street from his school, a throw back to my youth in Edison!!

I’ll meet you there for lunch or dinner anytime. Or Rosie’s or Frankie Feds for that matter.

Greg: Have you been to Vincent’s in Little Italy for scungilli marinara?