Malaysia, Singapore and Indonesia have always been known for their naturalised ethnic Chinese citizens, oftentimes called “Peranakan”, which means native-born, as they often descended from long-time immigrants from Southern China between two to six centuries ago.

But Penang (and, to a lesser extent, Singapore & Melaka) is also home to the Jawi-Peranakan, indigenised Muslims resulting from the inter-marriage of native Malays with their Muslim brethren who’re immigrants from the Indian sub-continent and Middle-East. Within the Jawi-Peranakan diaspora are the “mamaks”, South Indian Tamil-Muslims who’re famed throughout Malaysia and Singapore for their tea & coffee kiosks.

In Penang, “mamaks” outnumber native Malays on Penang Island & especially the capital city, George Town, and their cuisine has become synonymous with Muslim food in Penang, with dishes like “nasi kandar”, “pasembor” (also known as Indian rojak" in Singapore) and “mee goreng”.

Mamak laksa is rarer. Penang is renowned for its asam laksa - rice noodles in a sourish-spicy fish-based broth, garnished with finely-chopped cucumber, ginger torch, onions and sprigs of fresh mint. In Malaysia & Singapore, it’s also known as Penang laksa, as laksa from Singapore and other Malaysian states do not have the sourish slant which Penang laksa has, due to its use of copious amounts of tamarind in the preparation of the broth.

In Penang itself, there is also Chinese-style asam laksa ([Penang] Air Itam Asam Laksa), which is thicker and has more pronounced sourish/fishy flavours compared to Malay-style asam laksa ([Penang] Malay-style Laksa Noodles from Laksa Janggus, Balik Pulau). Other than that, both versions use pretty much the same ingredients and garnishes. However, some Malay asam laksa places also sometimes add a hard-boiled egg into their laksa - something the Chinese version will never have.

Yesterday, I came across yet another sub-category of the Penang asam laksa. This one is the “mamak” (Indian-Muslim) laksa. The mamak laksa is a close cousin of its Malay counterpart: spicier than the Chinese or Nyonya versions, yet, less fishy. Besides the usual garnishes, it also incorporates “cucur” (Tamil fritters) and “popiah goreng” (deep-fried spring rolls) into the dishes. Hard-boiled eggs is also available as an add-on. 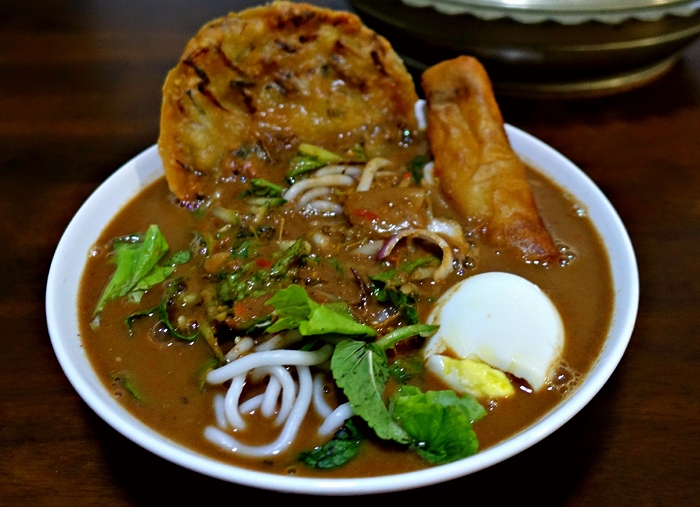 The itinerant vendor, Hamid Khan (a “mamak”/Tamil-Muslim) hawks his fare outside RHB Bank in Batu Lanchang, from his small motorbike. The laksa broth is kept simmering on a charcoal brazier perched on the back of his bike. 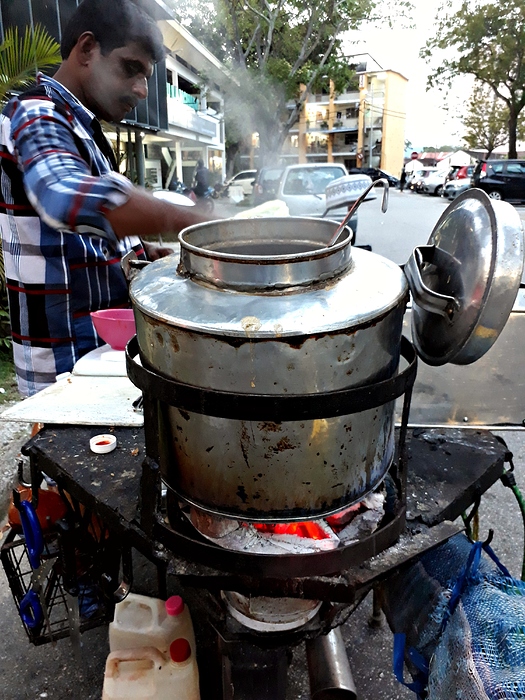 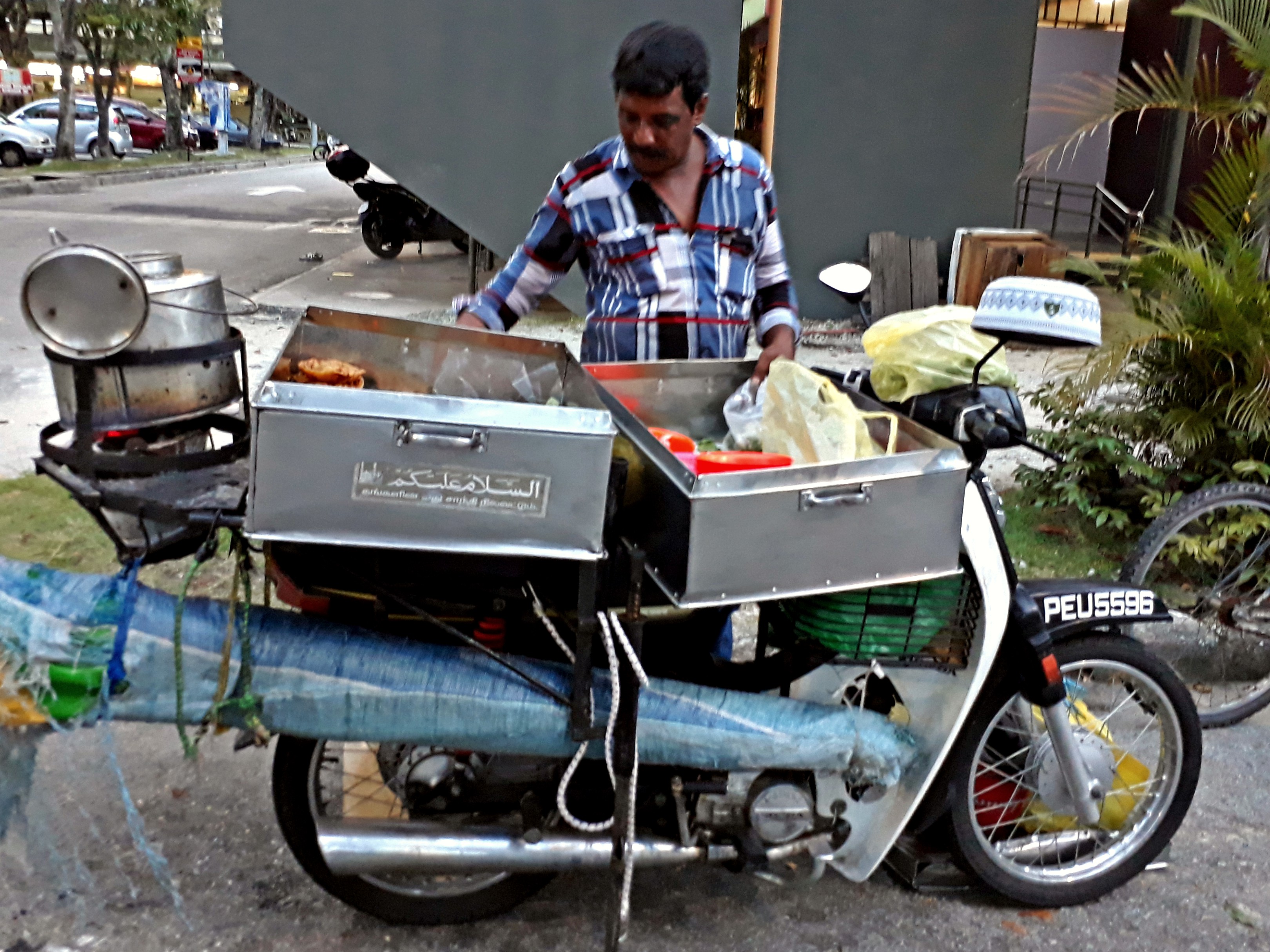 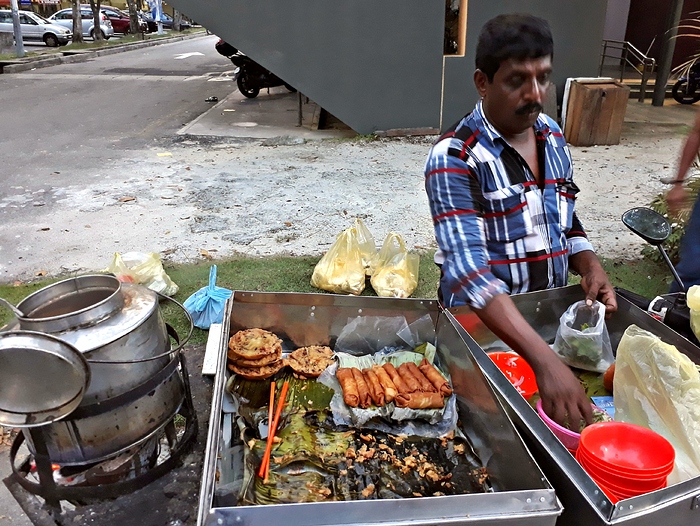 It’s amazing how he’s able to move around, then set-up shop to sell his laksa from that tiny, improvised hawker “stall” of his.

His mamak laksa was spicy, with very concentrated fishy flavours. The addition of crisp-fried Indian fritters and spring rolls - very tasty, when dipped into the spicy-sourish broth - is very nice, but pretty substantial. 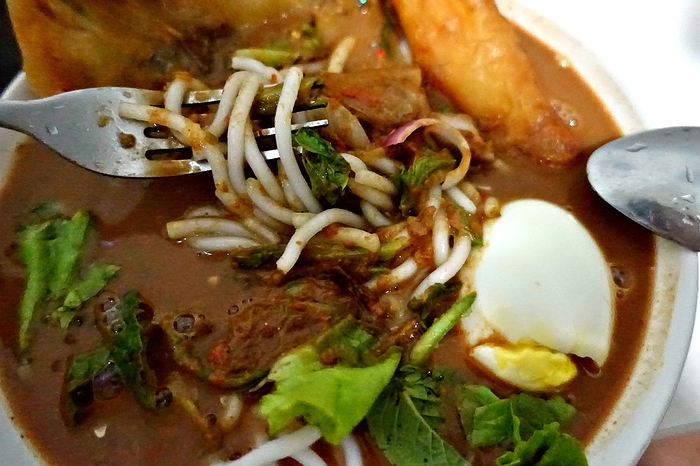 I’m always finding new things in Penang almost every day. Been in Penang since May 2017, so it’s nearly a year now. Was in KL 2011-2016 whence I explored about 1,000 eating places, many offering things I’d not seen or experiened before (I’ve been actively Chowhounding back in Singapore for 20+ years and thought I’d seen everything Singaporean/Malaysian cuisine have to offer, but I now realise there are hidden gems in every corner I’d not looked at previously).

Keep up the great work @klyeoh

This looks great, thanks for the breakdown of the different variants. I only had asam laksa a couple of times whilst in Penang, so didn’t realise how it differed. The one from Air Itam was a revelation to me, I’ve not had anything like that at home.

Maybe the “cuisine of the quarter” will inspire me to try and capture it at home, I miss that thick fish based sauce.

The one from Air Itam was a revelation to me, I’ve not had anything like that at home.

In most parts of the world, “laksa” will inadvertently refer to noodles in a light curry sauce, a result of the predominance of such versions - Ipoh, KL, Johore, Singapore, Melaka, even the Sarawakian one will fall into that category, i.e. curried, soupy noodles. Only Penang’s asam laksa falls outside this definition.

Cafe TPT is my go-to place for South-east Asian-style curries whilst in London. Curry Laksa - this one is closest to KL-style curry laksa, than those from Singapore or other states in Malaysia (the ones from Penang or Ipoh are all pretty distinct and wholly different from each other) [image] Cafe TPT’s version has yellow Hokkien noodles, with shrimp, fishcakes, tofu puffs, long beans ( de rigeur in KL-style laksa), mussels, beansprouts and chicken slices. [image] Beef flank curry, with …