Mdm Looi Szu Hoay aka “Ah Hoay” currently runs this 40-year-old nasi kunyit stall, taking over from her mother, Madam Sim Chai Heok aka “Ah Heok”, in a business started by her grandfather back in the late-1970s. 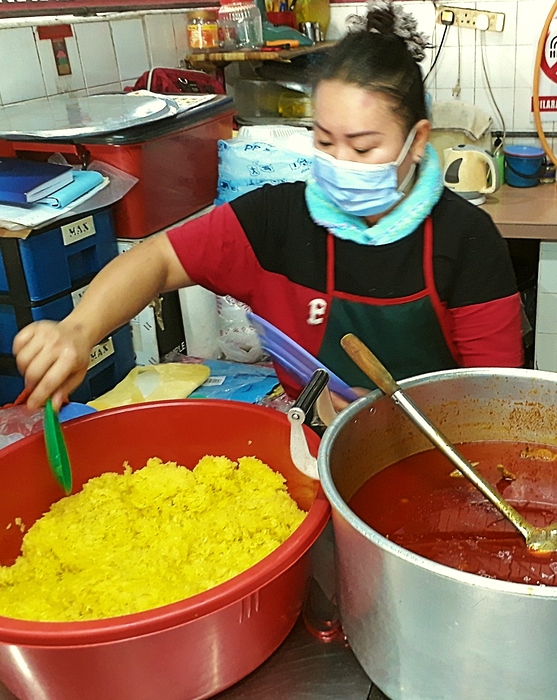 Despite its name, the traditional Penang-Nyonya “nasi kunyit” is actually steamed glutinous rice (“pulut”), and not rice (“nasi”), tinted yellow using fresh turmeric (“kunyit”), and enriched with coconut milk. It’s a dish of Malay origins (where it’s known as “pulut kuning”), but has been fully adopted into Penang’s Nyonya-Chinese food culture. Nasi kunyit is usually cooked for auspicious occasions: a baby’s one-month-old ceremony/celebratory meal, or served at the celebration of a minor god or deity’s birthday. It’s traditionally served with chicken curry. 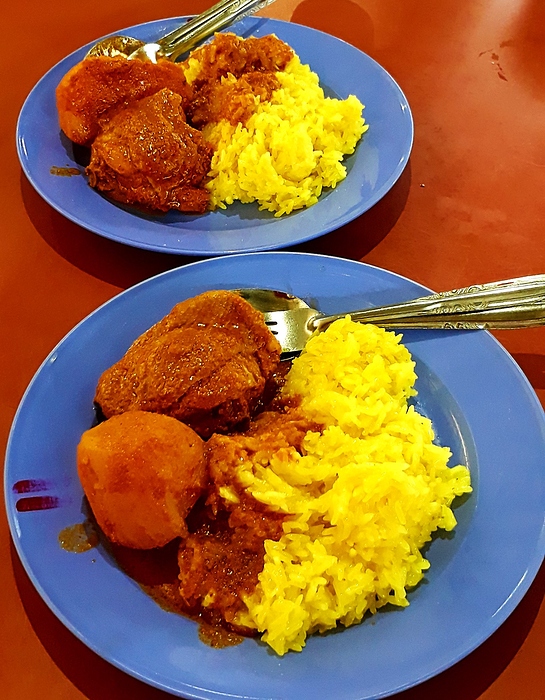 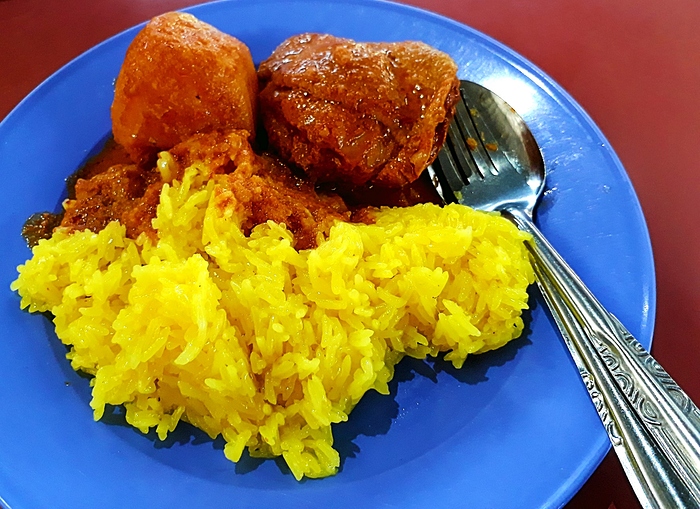 Mdm Looi serves her “nasi kunyit” with chicken and potato curry (RM7/US$1.60 for a standard portion). She opens 7am till she sells out , usually by late morning/11-ish, Thu to Sun only (she takes a break Mon, Tue & Wed). 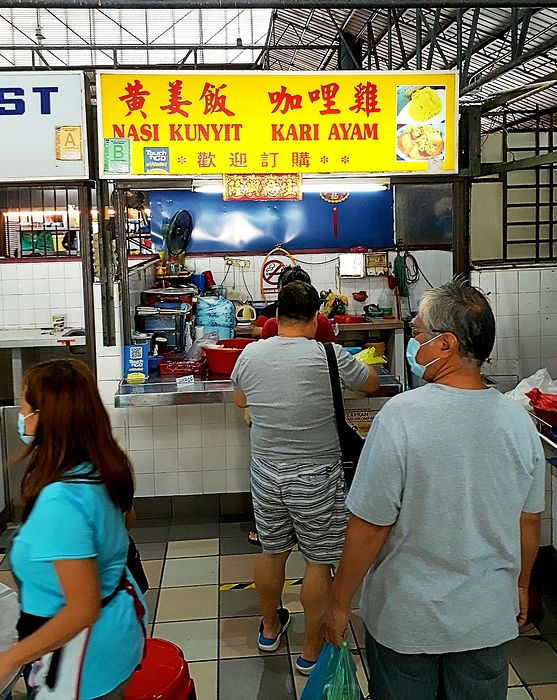 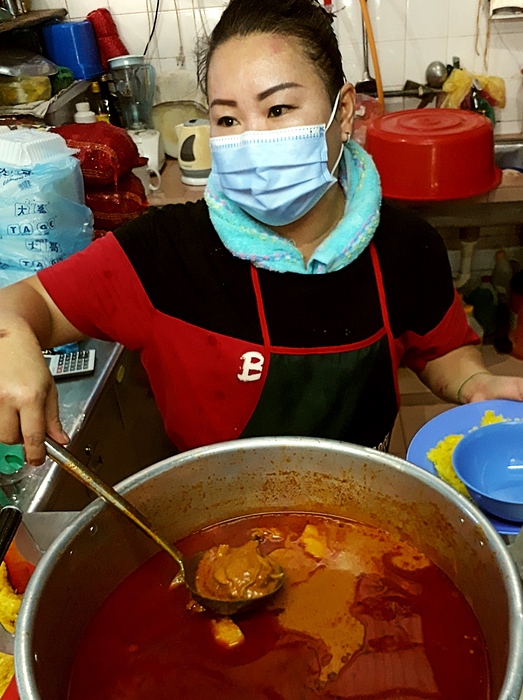 For me, the umami factor of her delicious coconut milk-rich glutinous rice with her slightly spicy chicken-and-potato curry is off the charts! 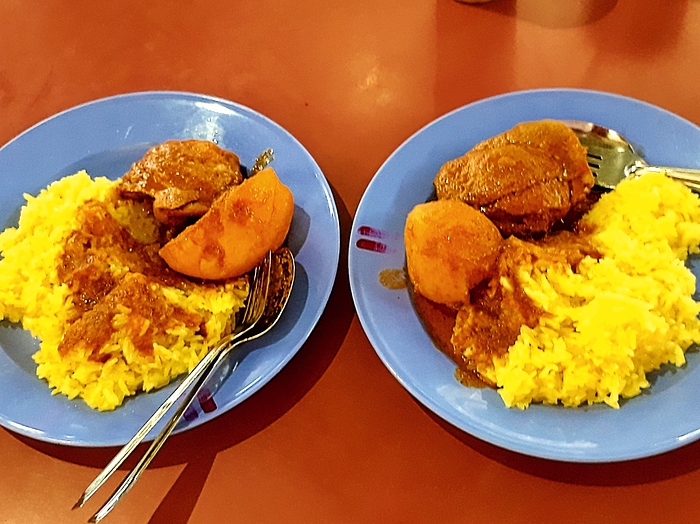 492 days since Movement Control Order (MCO) began in Malaysia on 18 Mar 2020, and Day 73 of the current MCO 3.0 Lockdown. Lunch today is a take-out of Penang-Nyonya nasi kunyit from Bayan Baru: 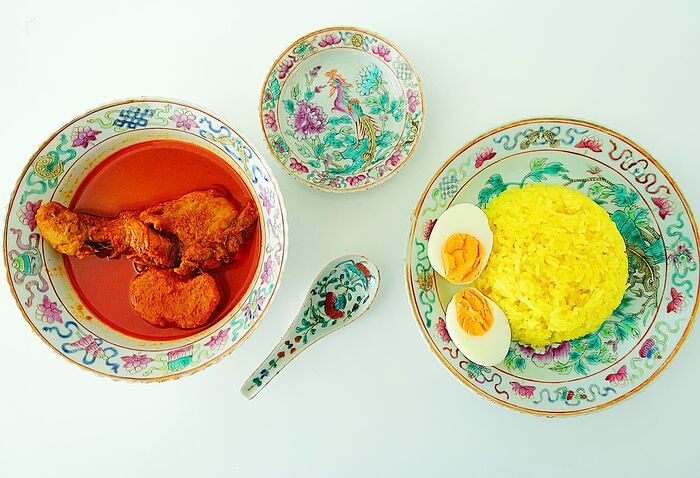 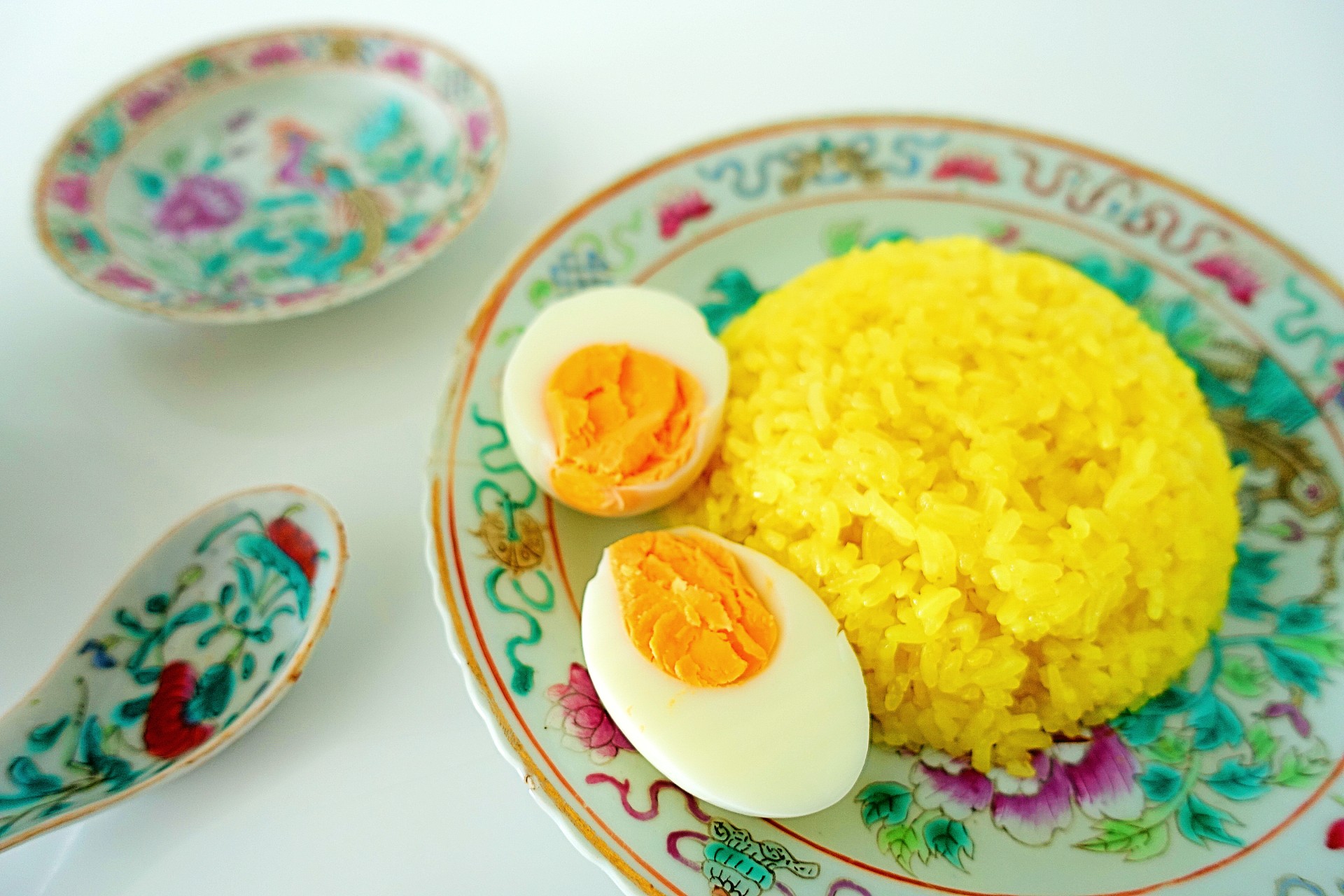 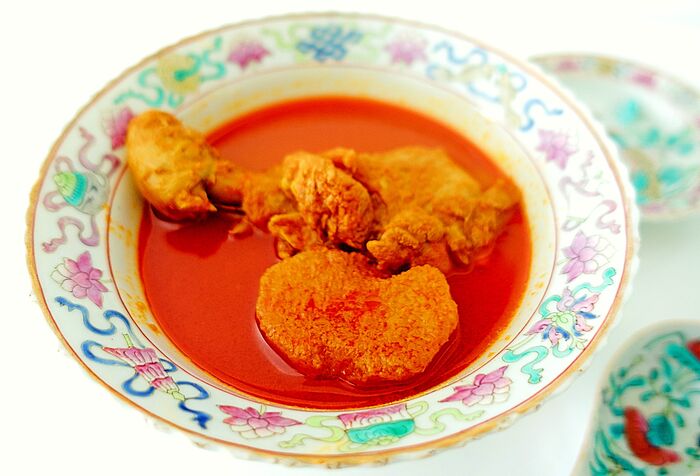 𝐀𝐃𝐃𝐄𝐍𝐃𝐔𝐌
“Nasi kunyit” is a Penang Straits Chinese adaptation of the Malay “pulut kuning”, also called “pulut kunyit” in Sumatera, Indonesia. The Malay and Indonesian terms are more accurate as “pulut” refers to glutinous rice, which is what “nasi kunyit” is made of.

“Pulut kuning” is an important ritual food item in Malay culture and tradition. It is specially prepared only for religious or celebratory occasions like “majlis perkahwinan” (wedding), “kenduri” (celebratory dinner), “majlis berkhatan” (circumcision ceremony), “majlis khatam Qur’an” (celebration of the completion of reciting the whole Quran among the young), “majlis cukur jambul” (ritual shaving of an infant’s hair), or an engagement ceremony.

“Pulut kuning” is usually distributed, or shared with neighbours, friends and relatives, as a sign of thanks and gratitude.

Traditionally, the Chinese celebrate an infant’s full month by preparing glutinous rice pudding for prayer rituals, and also distribution to friends and relatives.

The early Baba-Nyonya community in Penang, who adopted Malay practices, somehow saw the parallelisms between Malay “pulut kuning” and the Chinese “glutinous rice”, as well as Malay chicken curry with Chinese poached chicken which is usually used for ritual offerings. Also, in both Malay and Chinese cultures, the colour yellow is regarded as a symbol of “royalty” and is auspicious. This resulted in the Baba-Nyonyas adopting the “pulut kuning” (rebranded as “nasi kunyit”) for a baby’s full month celebration. The cross-cultural adaptation was pretty amazing as the Chinese are Taoists, whereas the Malays are Muslims.

In Penang, “nasi kunyit” with chicken curry, together with “ang ku kueh”, are traditionally distributed friends, relatives and neighbors, by a family to celebrate their new baby’s “full month”, i.e. 30 days after birth. “Nasi kunyit” is also used as a food offering for a “Dato’ Kong” (local deity)'s birthday.

raditionally, the Chinese celebrate an infant’s full month by preparing glutinous rice pudding for prayer rituals, and also distribution to friends and relatives.

Yes, and the Chinese have this big, BIG birthday celebration when one reaches 60. I guess, in the old days, when you’re 60, you are one ancient geezer.