Foong’s Hainan Chicken Rice on Hutton Lane is run by Wong Wan Foong, a youngish owner-chef who took great care in chopping and serving his Hainanese-style poached chicken. We found out later that he’s the son of the famous Wongs, the husband-and-wife couple that operates a very popular chicken rice stall at Kheng Pin Kopitiam on the corner of Sri Bahari Road and Penang Road. 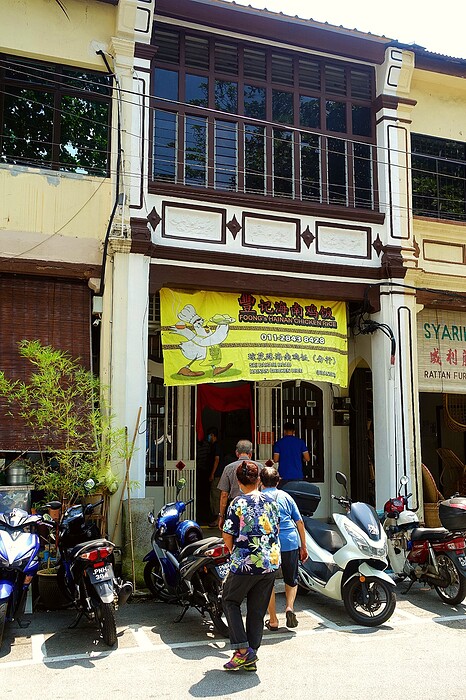 Unlike many Hainanese chicken rice sellers who hung their poached chickens at the display/serving counter, Foong follows the old Hainanese method of laying his cooked chickens on the trays, as he felt hanging up the chickens would “cause them to dry off, as the juices would flow downwards & drip out”. 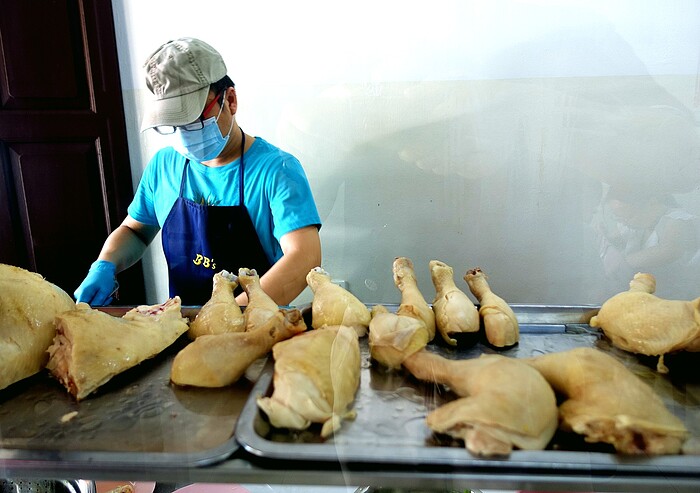 Foong follows the meticulous precision of his mother when chopping up his poached chicken. It’s drizzled with sesame oil-light soy sauce-shallot oil dressing, and finely-julienned scallions and ginger. 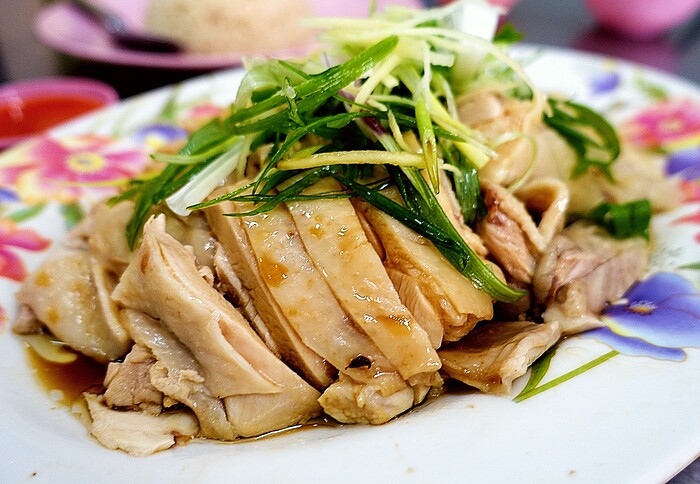 As with every chicken rice meal we have, we simply had to order the poached chicken livers and gizzards, drizzled with same sesame oil-light soy sauce-shallot oil dressing, as well as rendered chicken fat. 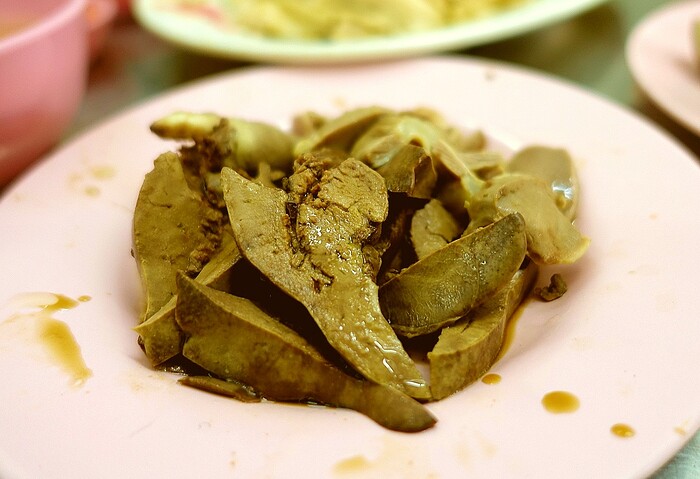 Hainanese-style chicken rice is cooked using rice grains which has been sautéed in chicken fat, before being cooked in chicken stock flavored with spring onions, ginger and whole pips of garlic. Whole pandan leaves, tied in a knot, would be added to the pot of rice during the cooking process, for the fragrant scent - it lends a unique South-east Asian touch to the dish, pandan leaves are not used for cooking back in Hainan Island, China, but indispensable to the Hainanese diaspora living in Malaysia, Singapore and Thailand.

The result is a moist, fragrant, rich-tasting chicken-flavored rice that’s good enough to eat on its own: 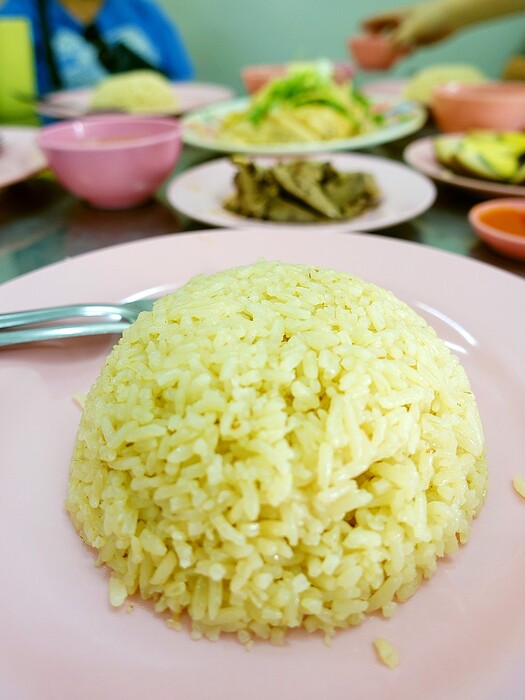 Generally, one gets much better Hainanese-style chicken rice in Singapore than in Malaysia, as the rice tastes richer there, and is cooked from high-quality Thai jasmine rice. In Malaysia itself, Malacca does a good variation, where the cooked rice are pulverized and shaped into ping pong-sized balls. 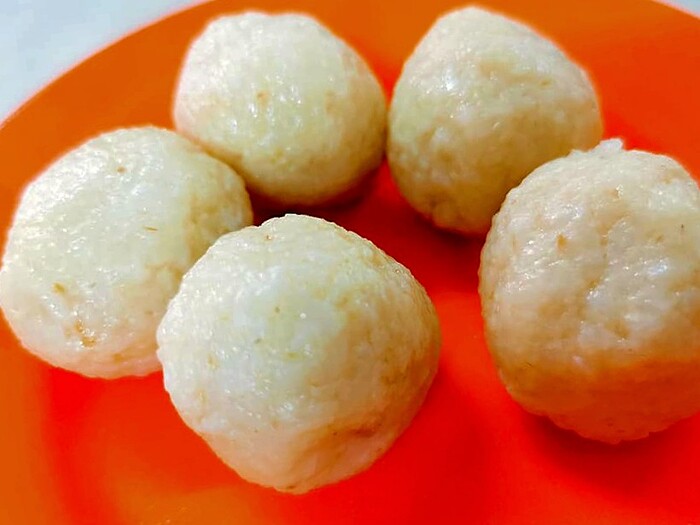 Whilst those good Kuala Lumpur places served boiled chicken intestines - one of my fave sides- which I can’t find anywhere else, they don’t have chicken blood pudding, which Hainanese chicken rice places in Bangkok (where the dish is known as “khao man kai”) have.

Over here at Foong’s, there are also soy-braised tofu and hard-boiled eggs offered as sides. 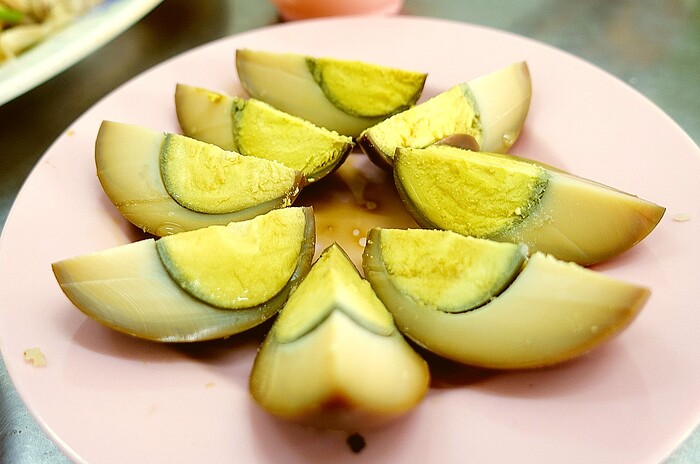 Overall, Foong’s still offers the best quality Hainanese chicken rice in George Town at the moment, ahead of other frontrunners like Goh Thew Chik on Chulia Street and Wen Chang on Cintra Street. 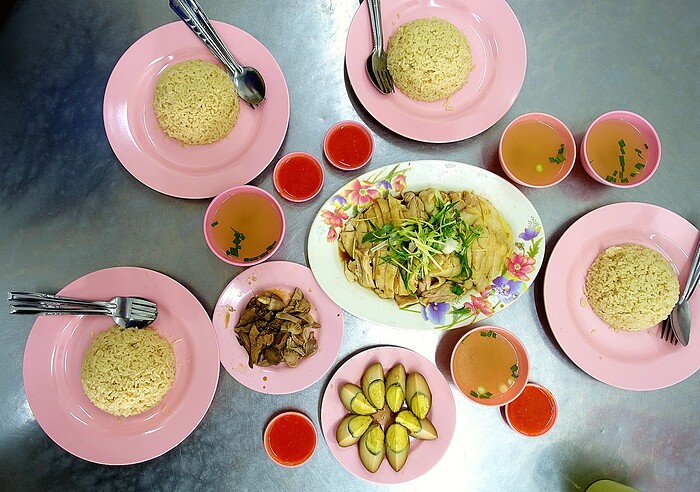 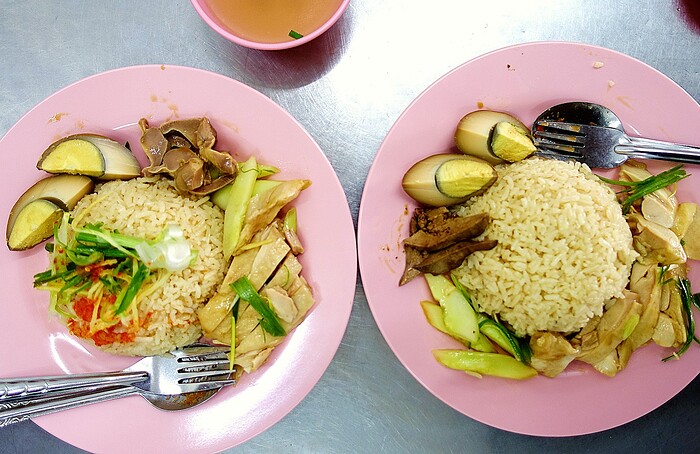 With the latest COVID lockdown in Penang, where dining-in at restaurants are banned till 7 June, at least, we had take-outs from Foong’s for lunch yesterday. 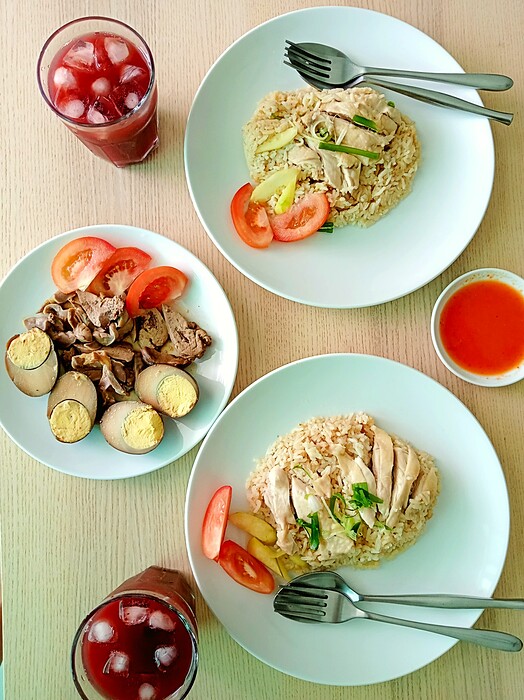 The poached chicken was stacked atop the rice for takeouts: 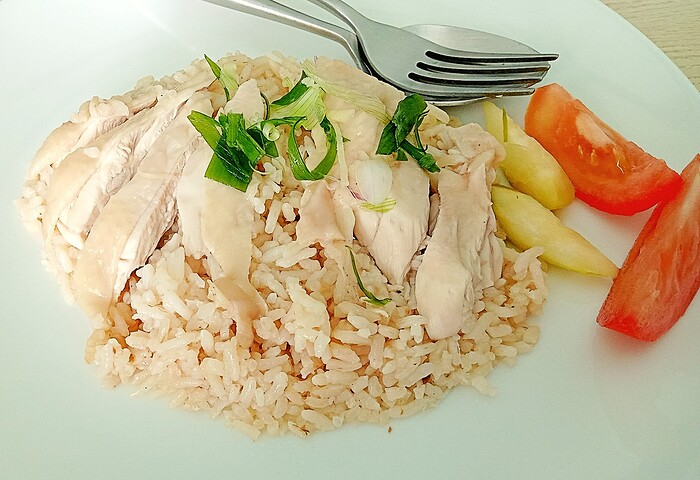 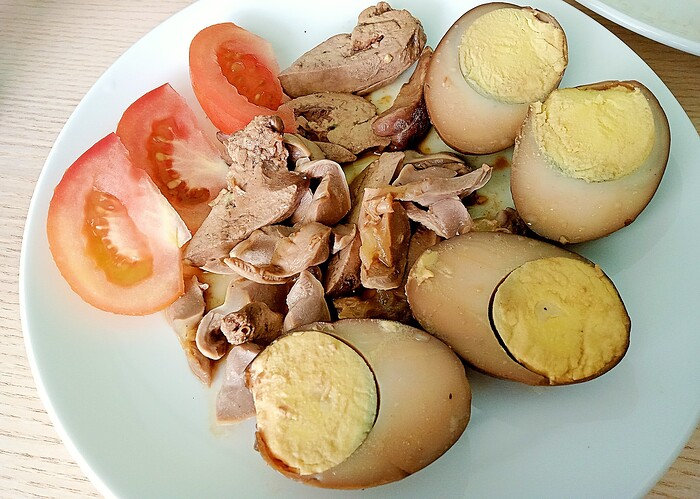 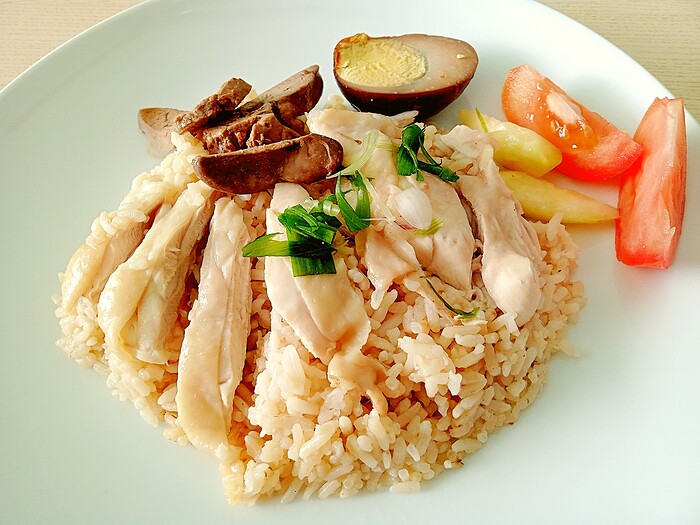 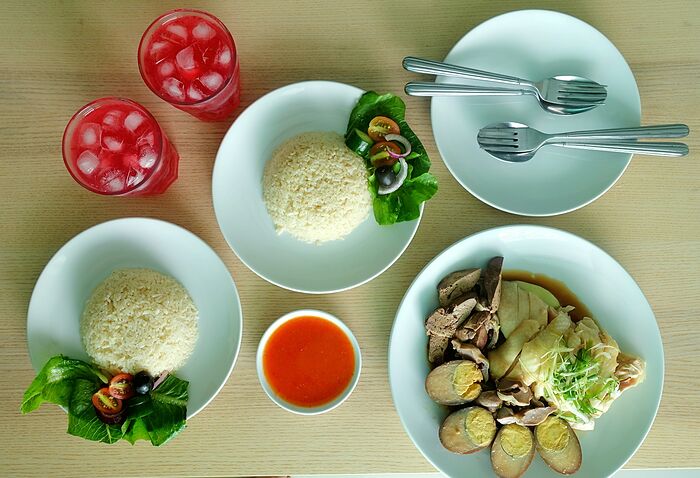 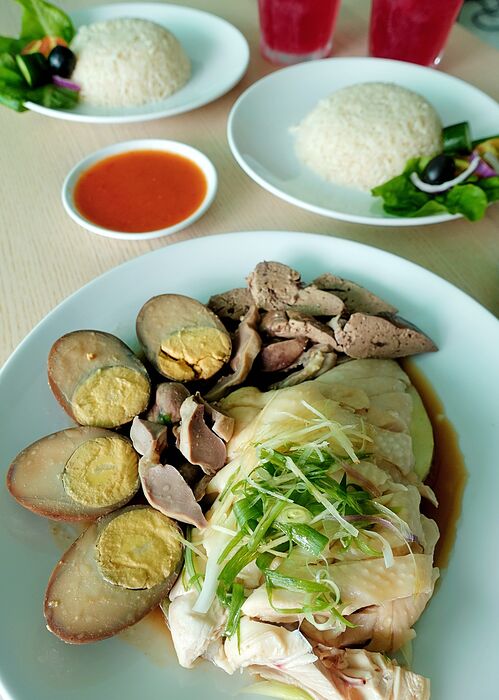 The aromatic chicken rice, fried in chicken fat then cooked in chicken broth, flavred with scallions, ginger and garlic, and scented with pandan leaves - the version here at Foong’s is the best in Penang, and comparable to the ones we get in Singapore. 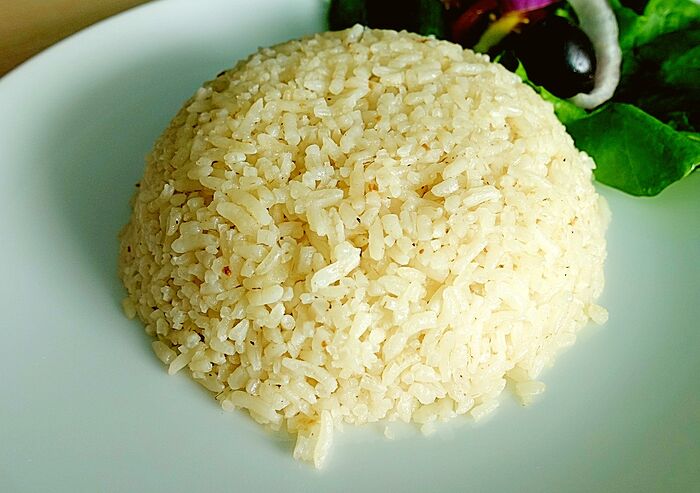 Foong’s standard of cooking has continued to improve significantly over the past couple of years, eclipsing its competitors within George Town 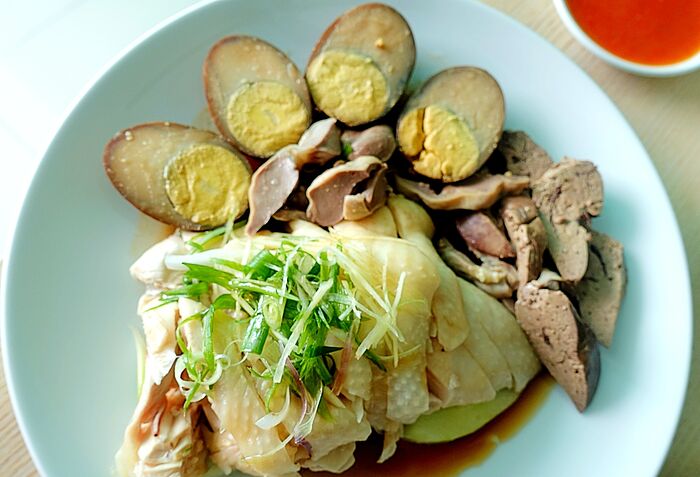 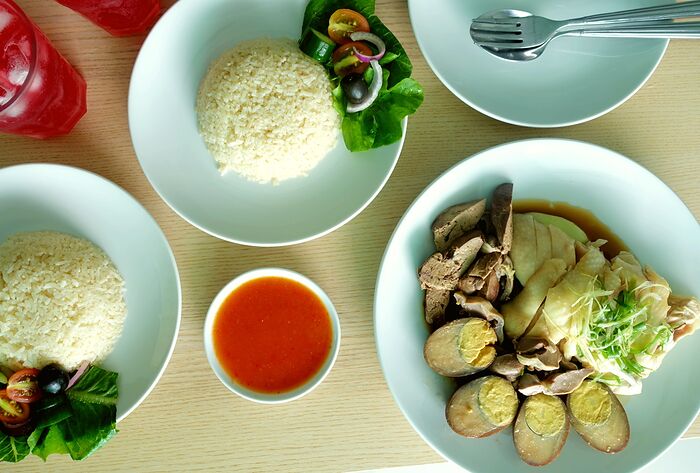