Ocean Green is a beach-front Hainanese-run seafood restaurant that’s popular with both locals and foreign visitors to Penang. It’s owned by the Tans who also own Paramount Hotel, a rather retro-looking villa-like bed-and-breakfast joint established back in 1948, but has partners who manage the day-to-day running of Ocean Green that occupies the grounds of Paramount Hotel directly facing the stretch of beach in-between Gurney Drive and the Esplanade. 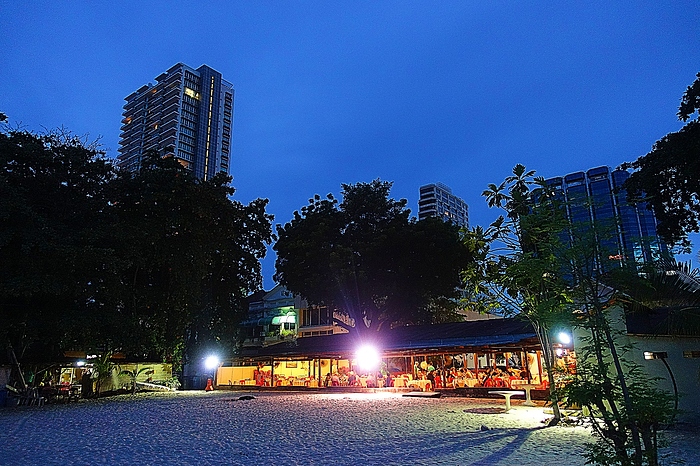 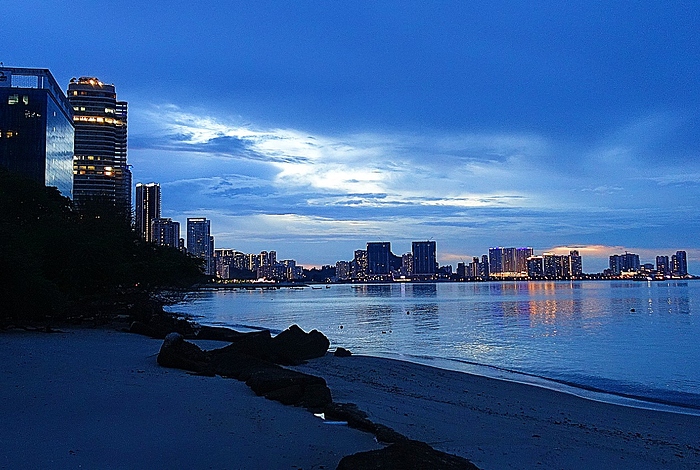 We were back at Ocean Green for dinner last night, our first time there in a long time. The restaurant had also just re-opened after the 2-month COVID lockdown. It had kept its entire staff force on full pay during the lockdown period as, Ocean Green’s affable septuagenarian restaurant manager, Mr Goh Cheng Hee said, “Most of our staff have been been with us all their lives.” Mr Goh himself has worked there for more than 40 years now. 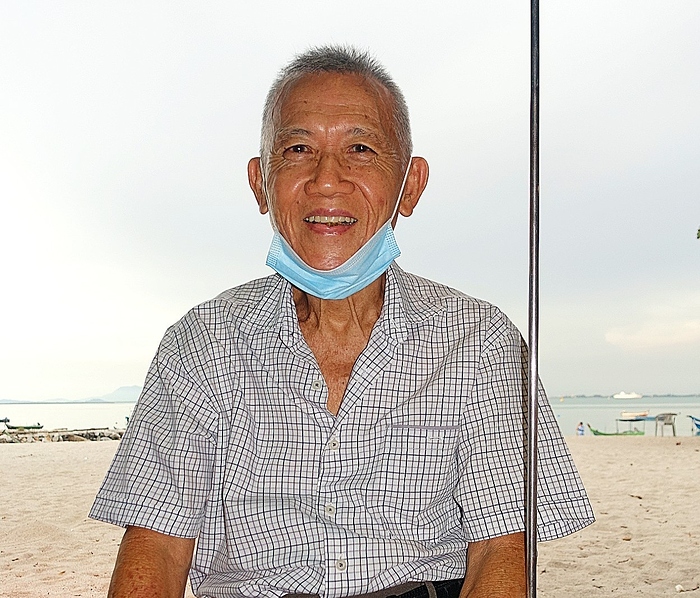 Like most of his Hainanese kin that dominate Malaysia and Singapore’s food industry for the past 100 years, Mr Goh is quietly-efficient, meticulous but usually spoke very little. However, I was pretty lucky that two of my dining companions were old friends of his - having known each other since they were all in their 30s. So, Mr Goh even deigned to stop by for a chat.

What we had that evening:

But the “choon phneah” filling, a mixture of minced meat, julienned cabbage. onions, celery, and other condiments, were very tasty - in fact, one of the tastiest I’d had in Penang. The Worcestershire sauce was also pretty good - I didn’t ask if it’s home-made, as should be the case, rather than just out-of-the-bottle Lea & Perrins sauce that most eateries resort to nowadays. 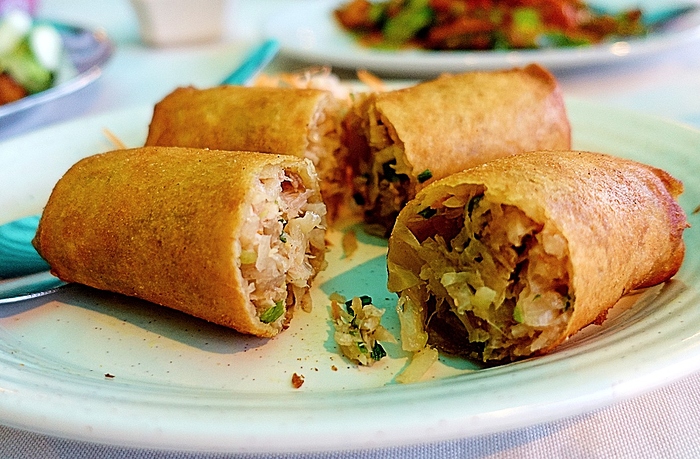 Singapore’s Chin Chin was founded in 1935 by Mr Lim Kim Choon, a Hainanese chef extraordinaire. The original Chin Chin’s oyster omelette was large, fluffy, moist, and packed full of flavours. When Mr Lim died, his son had initially taken over, but then decided to sell Chin Chin and emigrate to Perth, Australia, in the late-1990s. I’d mourned its passing then. But then, in the early-2000s, the Lims decided that life in Australia did not suit them and returned to Singapore and resurrected Chin Chin, this time on the neighbouring Purvis Street. But, somewhere along the way, they must have lost something, because the shrimp omelette tasted nothing like what I’d remembered it to be.
I found that lost taste here in Ocean Green. And over here, it’s served with a generous splash of chili-lime dressing which is not spicy, but lent a nice spike to undercut the richness of the omelette. It was perfect for me. 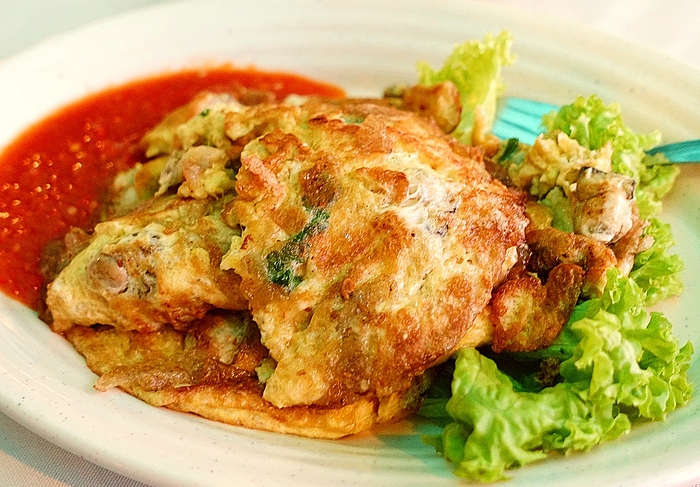 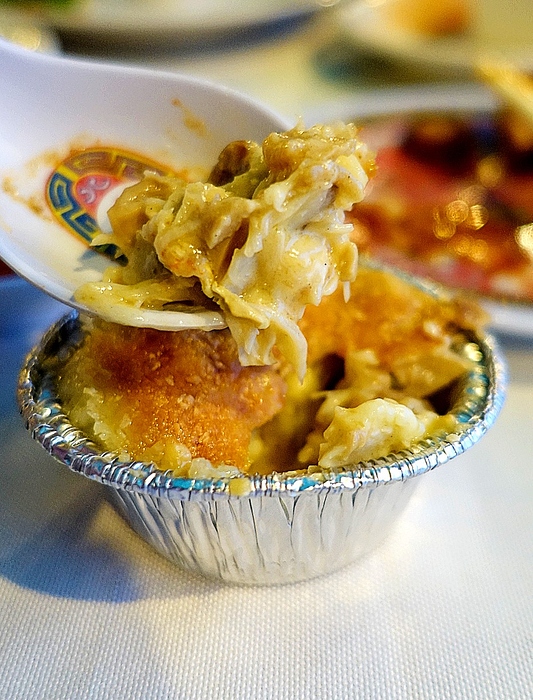 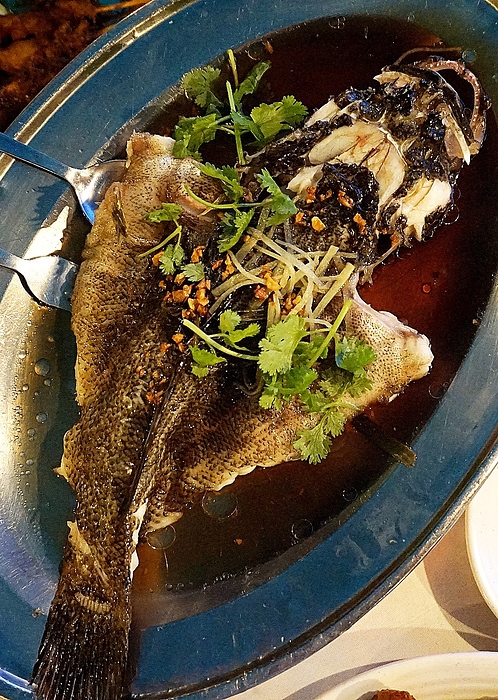 Par-blanched rice vermicelli was also served on the side - perfect for dipping into the tasty sauce: 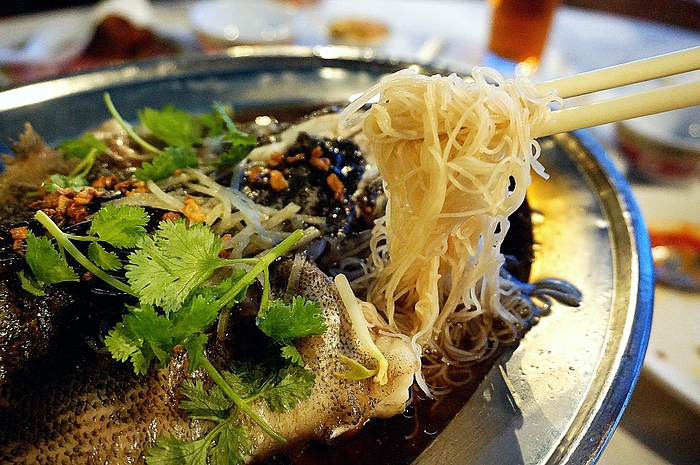 It’s actually a “new-ish” dish - my first time having it was around 2009 in a newly-opened Chinese restaurant on Orchard Road in Singapore. I was lunching with a cousin, and the waiter, after taking our orders asked, “Would you like to try the 4 Heavenly Kings?”. We were bemused and asked, “What is that?!” And he started explaining that it was very popular in Malaysian Chinese restaurants - at that time, we had not heard of such a dish in Singapore. Much later, in 2012 thereabouts, I was at New Fook Lam Moon restaurant in London Chinatown when I saw “The 4 Heavenly Kings” on its menu, and knew immediately that there must have been a change in ownership - true enough, I found out that the previous HK owners had sold out to the present Malaysian owners.
Ocean Green’s rendition consisted of long beans, wing beans, lotus root and cashew-nuts. Its sambal belacan was delicious and carried the dish. 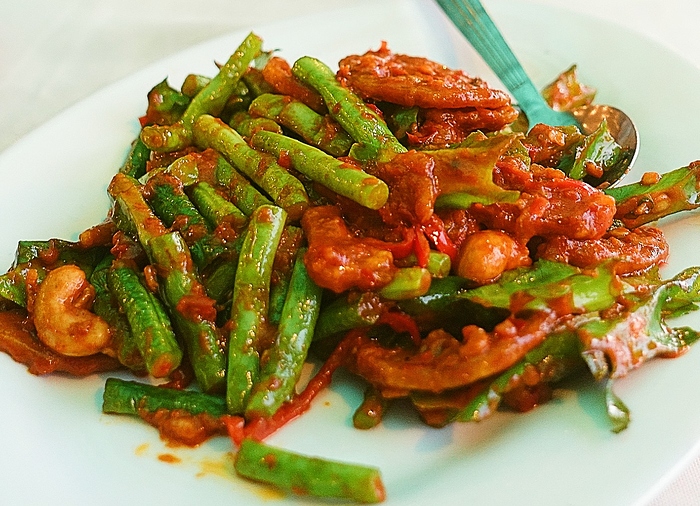 Overall, we had a fabulous dinner - whilst not exactly as perfect as we’d have wished for. Even as Penang’s restaurants have re-opened and operate with the necessary social distancing requirements in place, the place is quieter than normal. Ordinarily, getting a reservation at Ocean Green can be a real pain - perhaps requiring a few days, or a week’s advance reservation. These days, it’s still three quarters empty. Malaysia still closes its borders to all foreign visitors, so only locals are now dining there. Quite an opportune time to go now, actually, as one won’t get the noisy hustle-and-bustle which normally characterised dinners at Ocean Green. 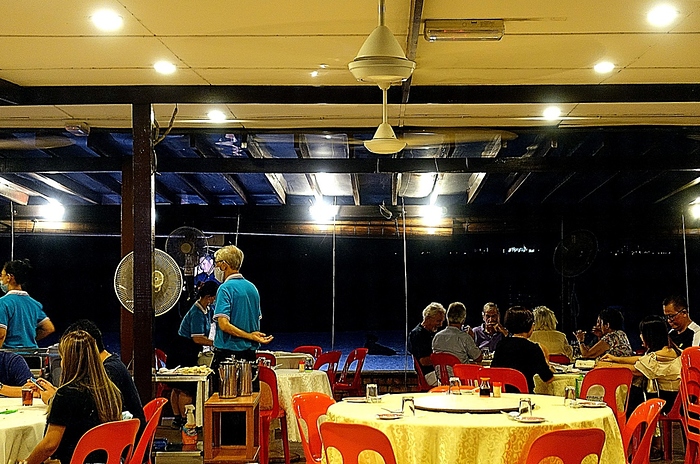 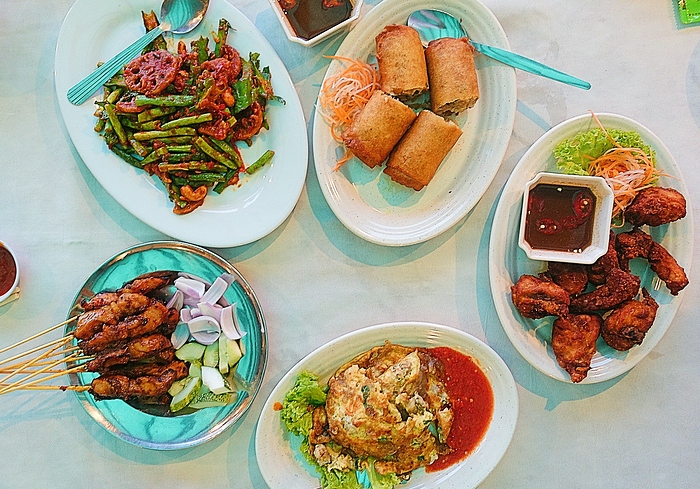 A fantastic, if huge, meal. Not a fan of oyster omelette but I would eat it there. I ate popiah in Xiamen. Left me cold. Much prefer the fish balls. There are so many types and they are all delicious.

Always nice to learn the background story of a dish or restaurant. Thanks.

This is exactly me. Why I don’t have “friends”.

Looks excellent, on my list when I am back up in Penang.

The cheesy crab has to be a legacy of the colonial days?

For once, I’m more taken with the photo of the city rather than the food. Although the food looks and sounds really great. I would happily eat my way through that meal. Like the idea of the Worcestershire sauce & chilli dipping sauce - I’ll be trying that at home soon.

For once, I’m more taken with the photo of the city rather than the food.

The restaurant would be at the bottom-right corner of the first picture in my old post of the Penang International Food Festival, where you can see a cluster of tiny fishing boats:

The Penang International Food Festival 2018 moved up to the al fresco dining area of the 67th floor of the Komtar Tower in George Town’s CBD area this evening. Great views of the city from up there. View of Gurney Drive (Penang’s main promenade) and the residential towers of Tanjung Bungah and Tanjung Tokong in the background. [DSC06673] [DSC06691] View of George Town’s “7-Streets Precinct” , stretching from Magazine Road thru to Cecil Street, and the coastal highway leading towards the resi… 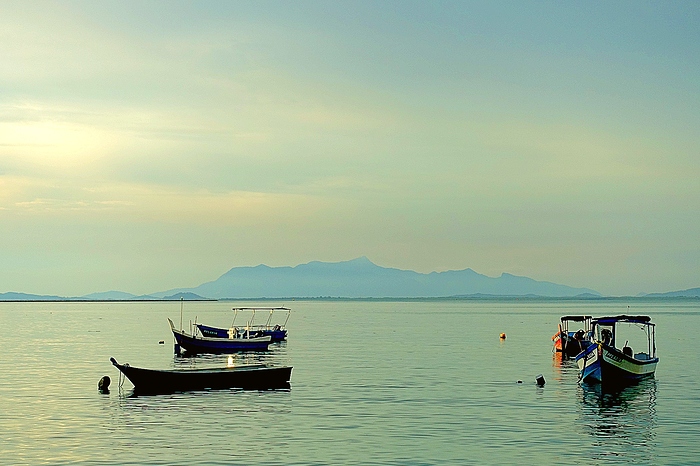 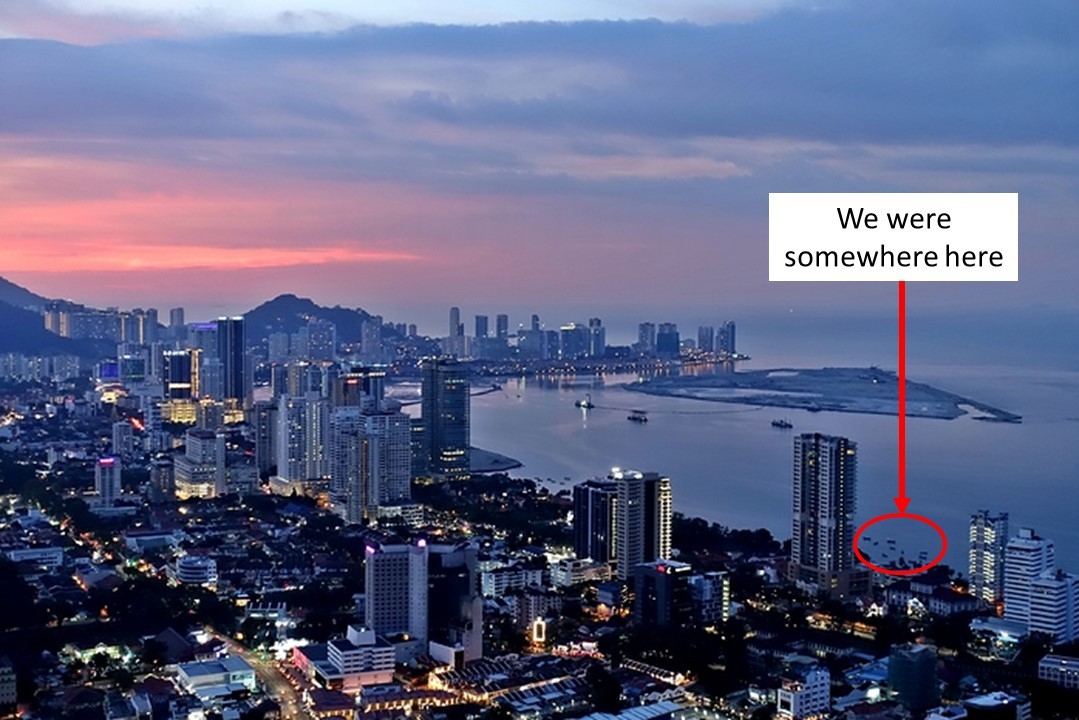 The cheesy crab has to be a legacy of the colonial days?

It is - very common, from HK to Singapore, it’s the British legacy.

It’s a dish we could do with bringing home. You just don’t see baked crab in restaurants. Here’s a recipe for home baked.

Nice and Easy - Starter or Snack

Although there was no need to mention it for the intended UK audience, it’s important mention that the brown and white meat needs to be mixed together before it goes back in the shell. I know Americans tend not to use the brown meat, but it really does improve the flavour of any crab dish.

Whenever I’m in London, I used to go to Bibendum at the Michelin House on Fulham Road for their dressed crab. Not baked, but the best ever.

I suppose if you’re visiting a crab house for the first time, there’s almost an obligation to order crab even if some of the monthly changing short menu has a good offering of other seafood dishes, supplemented by a several specials, at starter and manin course. For one starter, it’s a simple bowl of shell-on prawns in a sweet chilli sauce. Yes, it’s messy to eat but it’s absolutely lovely. Maybe the best prawns eaten in the UK. I find it hard to resist game, even in a specialist seafood place.…

Both places within sight of where the crabs were landed.

Nice! I’d sure love to visit & eat at those places.