We opted for a Hainanese dinner yesterday evening at Happy Garden in Penang’s Batu Ferringhi beach strip. Owner-chef, Tan Tee Yong, is one of the last of the dying breed of those traditionalist true-blue Hainanese chefs who’d dominated the culinary world of Singapore and Malaysia for more than a century. Back then, the Hainanese men would sally forth from their home island off the China coast to seek their fortunes in “Nanyang”, the “South Seas”, which was what the Chinese called South-east Asia in those days.

Known for their fortitude and dependability, the Hainanese in British Malaya carved out a niche for themselves as cooks and servers in households of the rich, the colonial officers, even the mess halls of the British army there. By the beginning of the 20th-century, no self-respecting British governor, or Malay sultan or king would be caught dead without a Hainanese chef in their kitchens. Every restaurant in the land, every cafe or coffeeshop, every bakery or even the tiny kitchens on-board the railway coaches or ships (cruise liner and naval warship alike) would have Hainanese chefs.

Historically, in British Malaya, the various Chinese ethnic groups came to dominate certain sectors of the economy: the Hokkiens were known for their merchants and traders, the Cantonese (and rival Hakkas) for their miners and coolies, the Teochews for street hawker food, the Hingwas in the transportation industry, and the Hainanese for being the preeminent dialect group dominating the hospitality and service industry, especially the kitchens in the top hotels and restaurants.

But times are a-changing: in the past 3 or 4 decades alone, young Hainanese no longer aspire to become chefs or own restaurants and bakeries like their forefathers. The lines have all but disappeared where ethnic-based work areas or economic sectors are concerned.

So it came to be that, in Singapore and Malaysia, people started looking back with dewy eyes at the hey-days of Hainanese restaurant food and cooking. “The food used to be so good back then. The restaurant had a real Hainanese chef” became a common catchphrase. People would flock to places where “one of the last Hainanese chefs” are still cooking. So, it it was for us when we heard that Happy Garden was owned and run by a Hainanese chef, and we simply lost no time getting here. 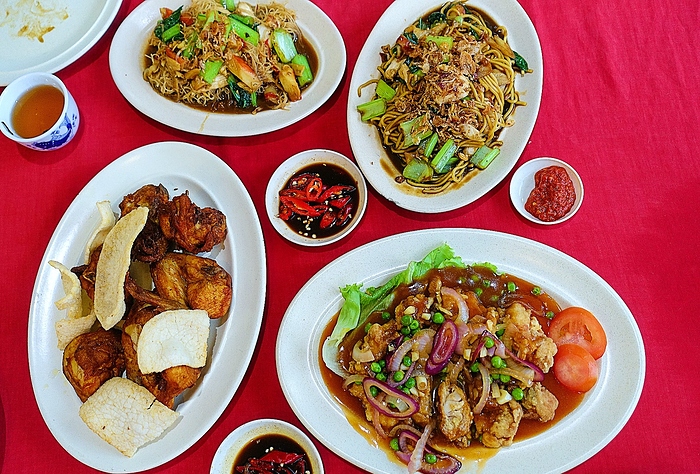 Happy Garden was, at first glance, like an elderly Chinese aunt’s home - a small, zinc-roofed Chinese village house, surrounded by abundant greenery and flowering shrubs that needed some trimming. The Tans bought this little house with its expansive grounds in 1985, and has been running their restaurant business here ever since. 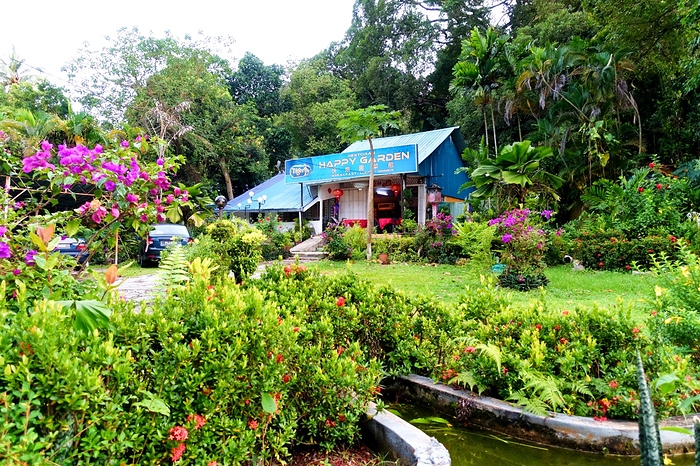 Mr Tan had polished his cooking skills at Palm Beach, Penang’s oldest beach hotel, back in 1972. He’d then moved on to cook at another Hainanese-owned eatery, Jee Hooi, until 1978, before going to the United States for a few years to gain experience and earn enough to return to Penang and started Happy Garden 35 years ago.

We started our dinner with: 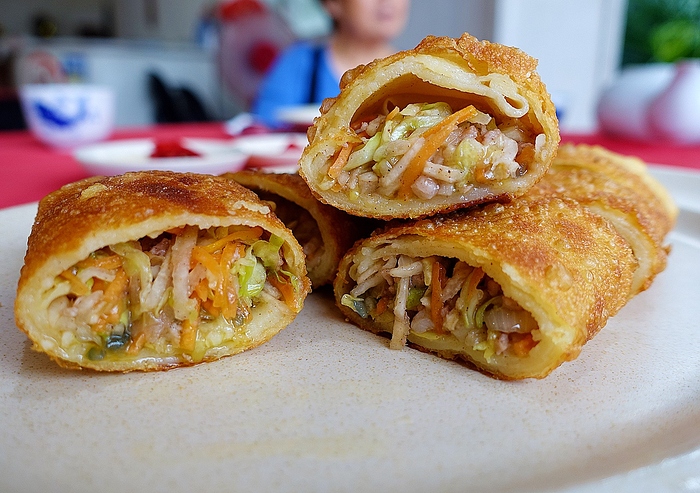 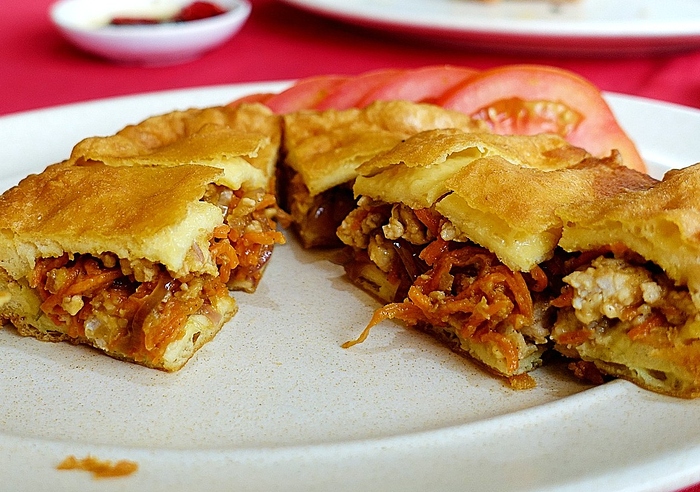 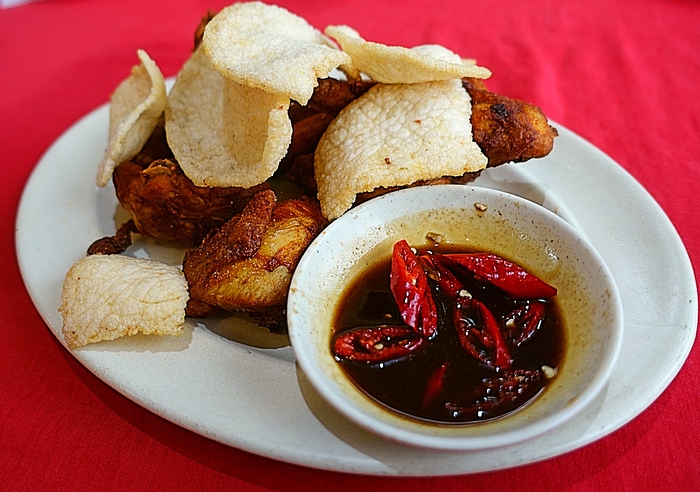 Located on the farthest reaches of Batu Ferringhi, Happy Garden is in a more “remote” part of Penang island, but certainly worth a drive out there for a taste of yesteryear’s cuisine. 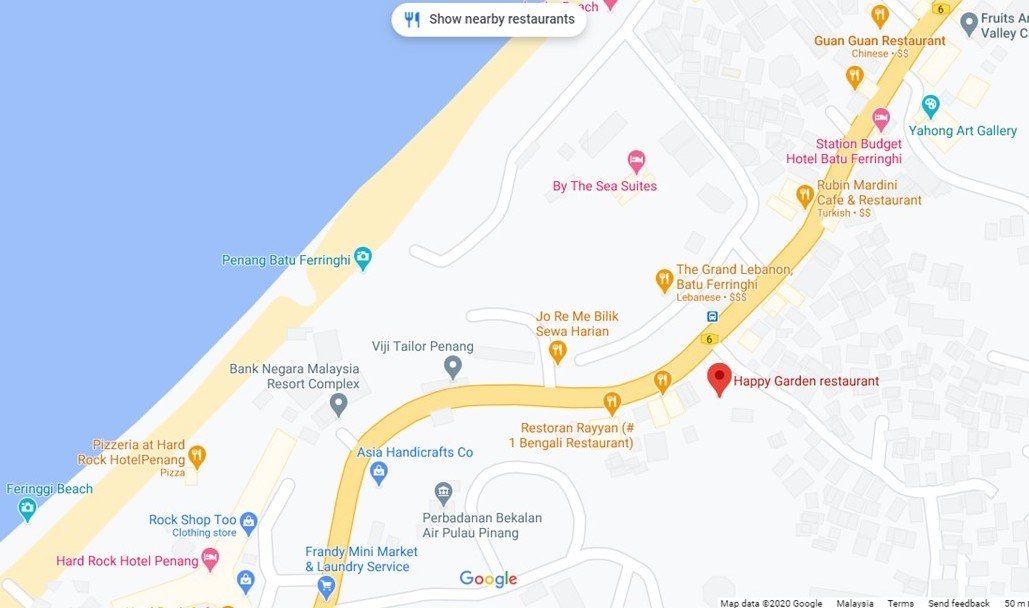 What does it take to renew interest in the younger generation in keeping the family business going?

What does it take to renew interest in the younger generation in keeping the family business going?

Traditionally, the Chinese looked upon chefs, wait-service staff and kitchen-hands as “unglamorous” professions, which was why many Hainanese in the last 30-40 years did not want to take over their parents’ business. I’d lost count of the number of good chefs or restaurateurs I talked to who proudly said their sons or daughters are doctors or engineers or run their own accounting firm, etc. Anything but their own food business.

But I think attitudes are rapidly changing - many youngsters are now beginning to see how exciting the food business can be. Also, TV personalities like Gordon Ramsay, Jamie Oliver, etc. are showing these young generation that, hey, being a professional chef can be fun.

So, in Singapore, Penang, KL, in fact everywhere in this region, we are beginning to see a new breed of young chefs coming up. The “problem” is - they also happened to be more interested in Western/continental cooking. 5 years ago, for example, one can not find a good croissant anywhere in KL or Penang. Today, I can walk down Beach Street in Penang where there are at least 6 good bakeries-cafes that serve buttery, flaky croissants, as good as one can find anywhere in the world! 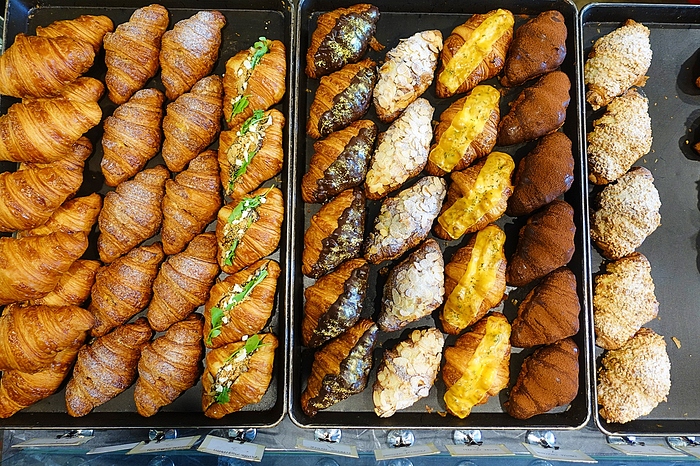 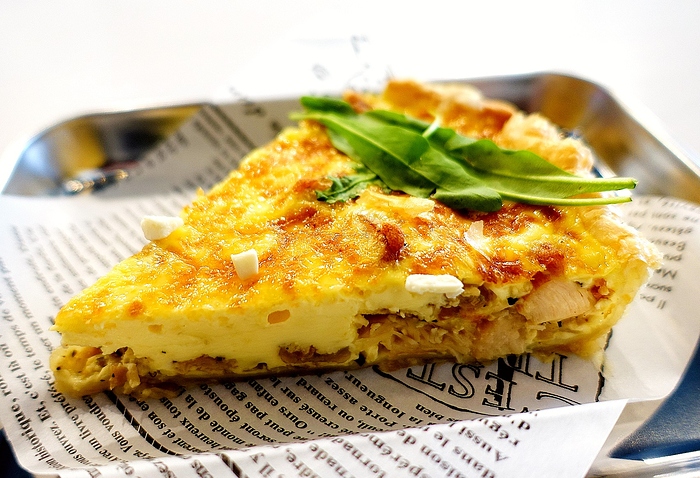 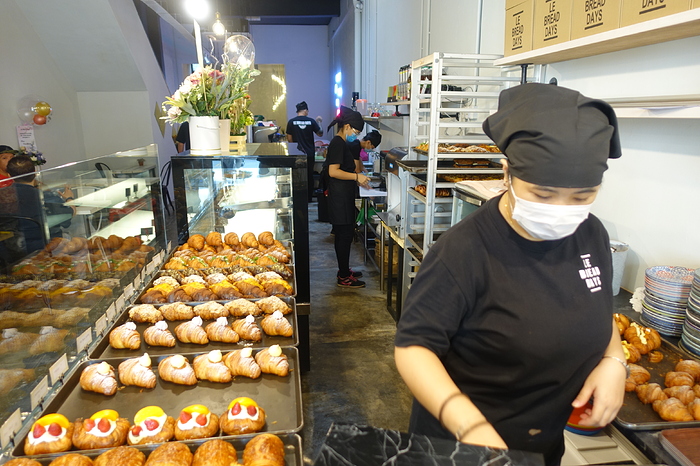 I think so too! It’s how things usually go, people going back to basics and roots.

I’m not very familiar with Hainanese food, from what I know they are usually lighter or less oily. Interesting to see many deep fried dishes here.

I’m not very familiar with Hainanese food, from what I know they are usually lighter or less oily. Interesting to see many deep fried dishes here.

The most popular Hainanese dishes in Singapore & Malaysia don’t even exist back on Hainan Island, China. Many of these dishes were practically invented in British Malaya, where the Hainanese chefs incorporated British culinary styles and practices to come up with Hainanese chicken chops, pies, oxtail stew, etc. They also adapted Nyonya & Indonesian cooking to produce “choon phneah”, inchi kabin, curry Kapitan, etc.

In Singapore & Malaysia, the Hainanese are famous for their “kaya” (egg custard jam) - I remember a Hainanese friend (whose family owned a traditional Hainanese coffeeshop in Malaysia for 80 years) told me how shocked he was when he went back to his grandfather’s hometown on Hainan Island for the first time, and found out no one there have heard of “kaya”!

Even Hainanese chicken rice as we knew it in Singapore and Malaysia differed markedly from the traditional Wenchang chicken rice in Hainan Island, which it evolved from.

Back to Happy Garden for dinner this evening, as some friends wanted to try the deconstructed "chicken pie", where the puff pastry were baked and served separately from the stewed chicken filling. 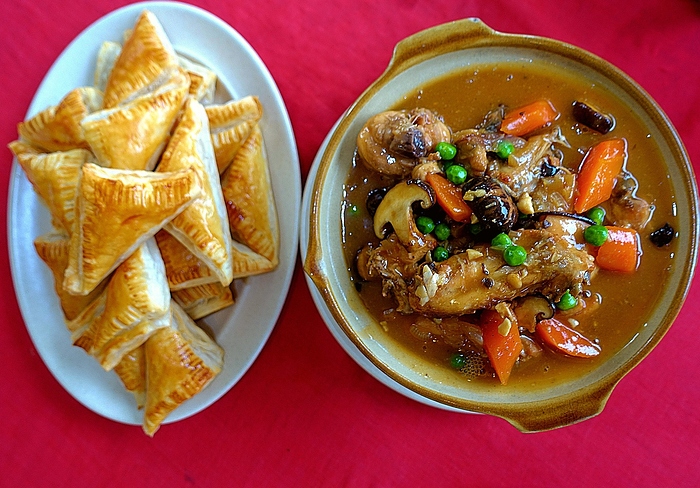 It was a stroke of genius, as the “pie topping” stayed crisp, until one dips it into the pie gravy. The chicken stew was typical Hainanese, a blend of English-style chicken stew but with Chinese touches: the scent of star-anise, cloves and cinnamon stick in the sauce, perhaps a dash of soy sauce and Worcestershire sauce, too. 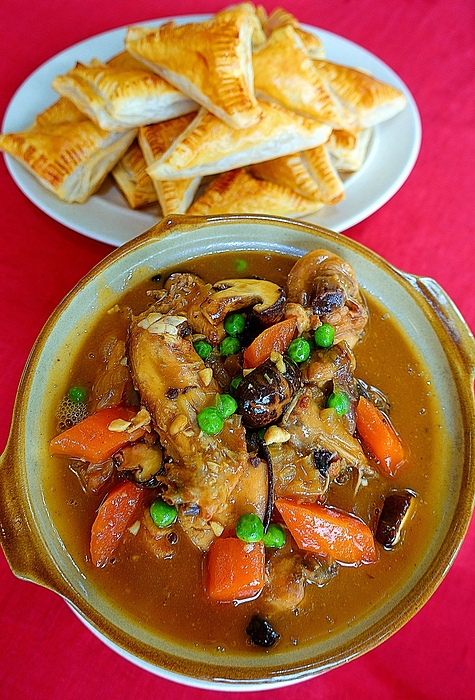 For starters, we order the choon phneah and roti babi again. 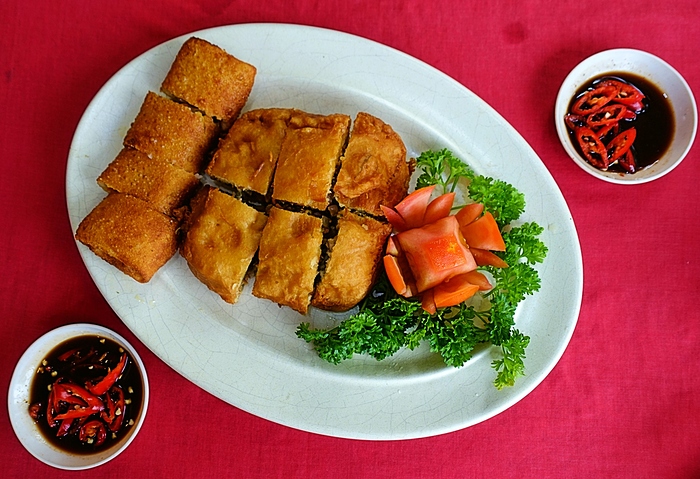 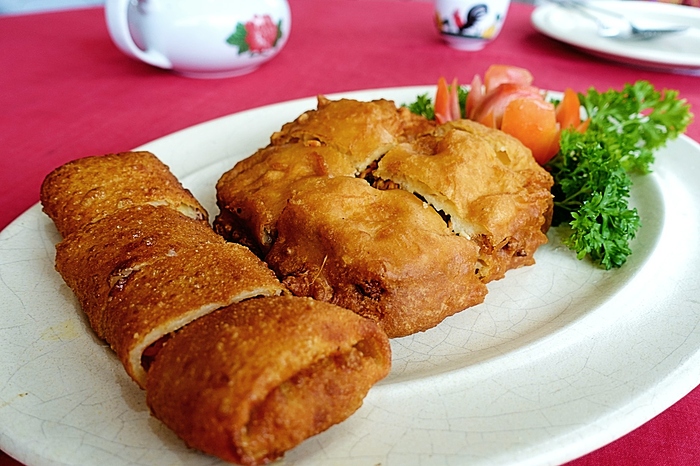 Cross-section of the "choon phneah" 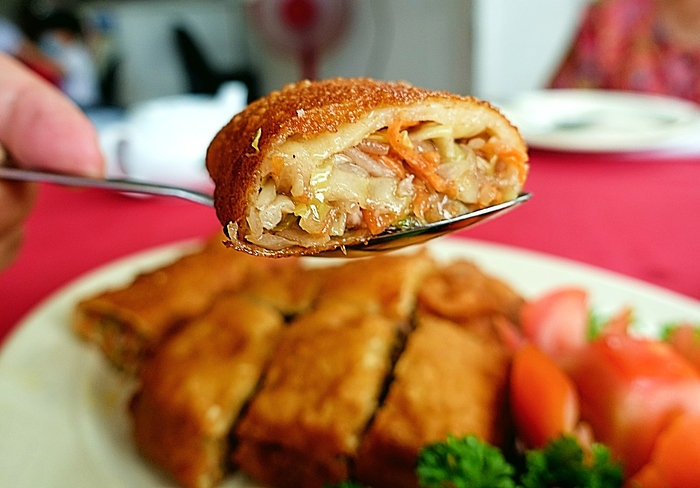 Cross-section of the "roti babi" 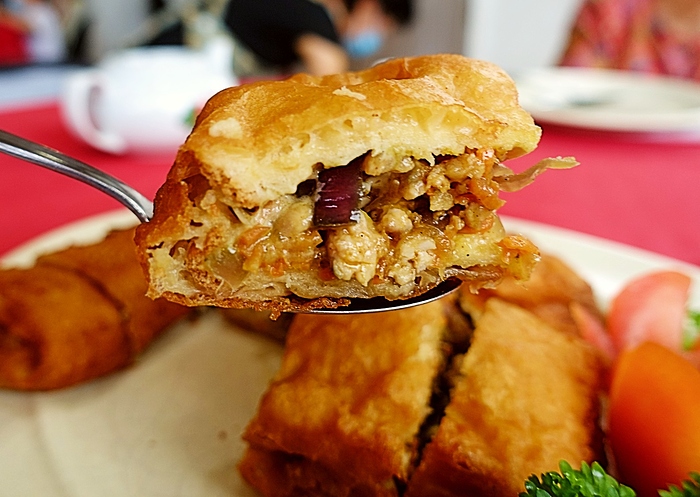 The restaurant is surprisingly quite busy this evening - full house, but the one-woman front-of-the-house tour de force, Mdm Sherine Lim, was calm and composed. No mean feat, considering that some tables had to wait 45 minutes or more before seeing their first dish for the evening! But folks here are terribly patient when it comes to waiting for good food. 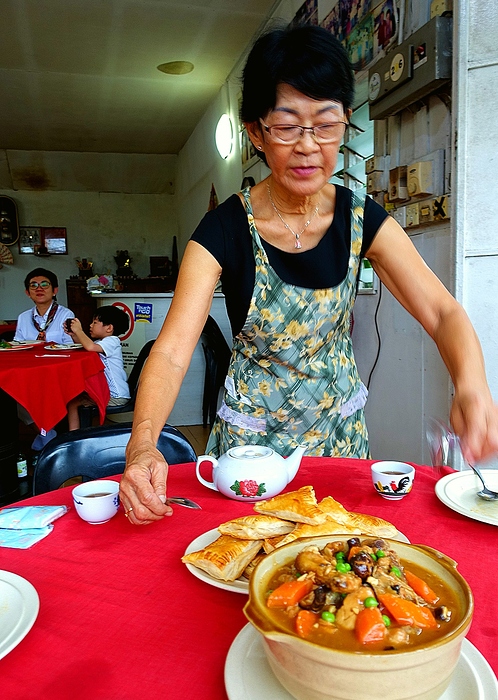 I was thinking of you today, Peter. On Netflix’s programme, ‘Somebody Feed Phil,’ one episode has him in Singapore. He ate such wonderful food there, sometimes accompanied by leading chefs of the area. He had a tasting feast at a restaurant called Burnt something or other. If there was no pandemic (what a world we live in), I’d jump on the next plane!

He had a tasting feast at a restaurant called Burnt something or other. If there was no pandemic (what a world we live in), I’d jump on the next plane!

He must’ve been at Burnt Ends, it’s an Aussie barbecue restaurant which has a 1-Michelin-star rating in the Singapore Red Guide. 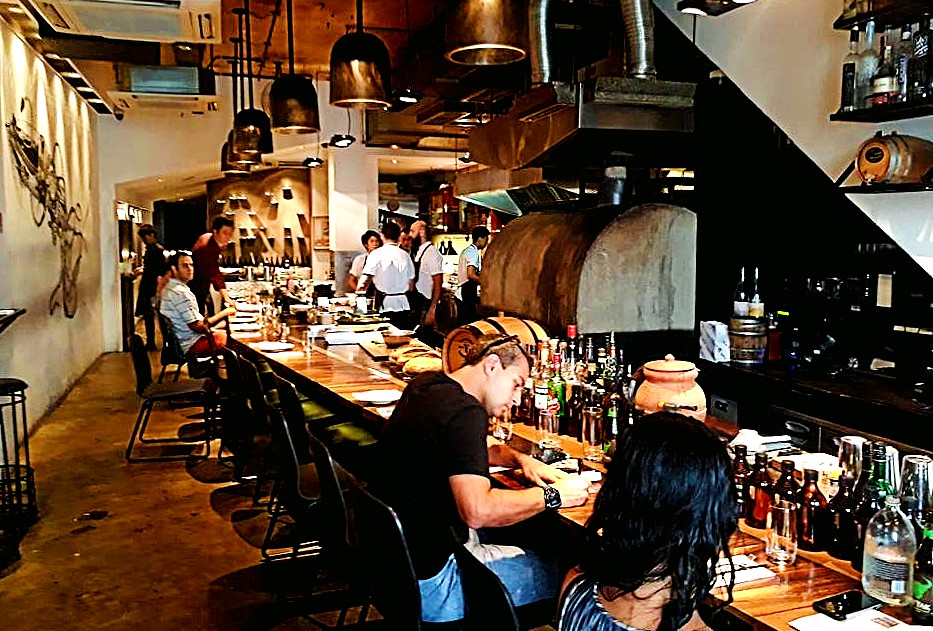 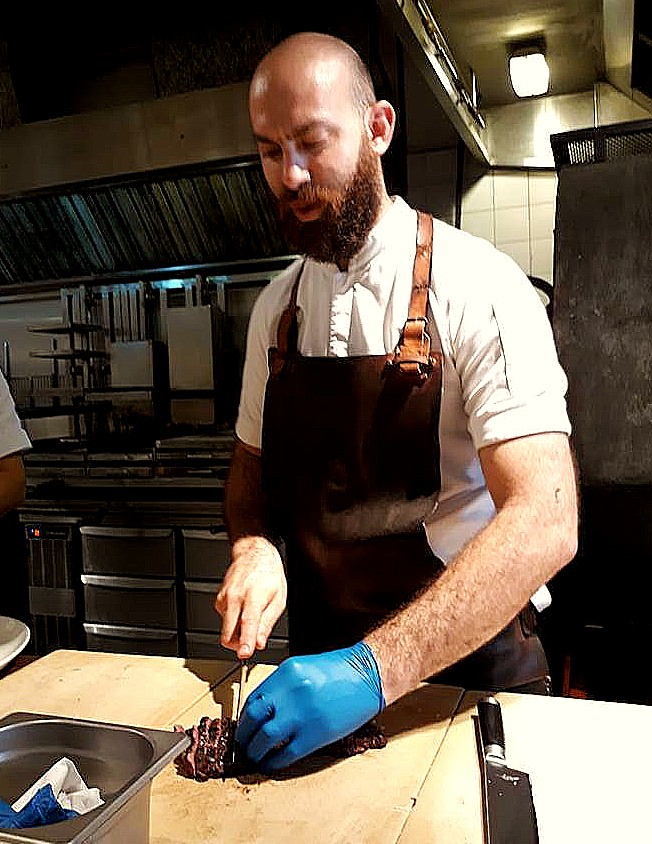 Do take care now, June - hope to catch up with you again soon once this pandemic madness is over, either up in the UK or here in Singapore.

Thanks, Peter. Yes, that’s the chef and the restaurant. It looked as if the food was worthy of a star. I hope our paths cross again! Right now, I’d be happy eating in ANY restaurant.

I hope our paths cross again! Right now, I’d be happy eating in ANY restaurant.

Pretty sure we shall! I’ll come and see you. This year has been crazy - my first time to have to miss my annual London summer vacation in more than 30 years!

We heard that the UK is going into lockdown again, please take care!!

We were back at Happy Garden yesterday evening - our first time back since the COVID pandemic which shut the world down back in 2020.

When we stepped in there, it was as if the madness of the last two years never happened: Mr & Mrs Tan were the same - she was loquacious, ever calm and friendly, whilst the husband was more at home in the bosom of his kitchen. But their clientele - oh my, they must have quadrupled since the last time. Mrs Tan had to turn away many, many walk-ins - over here, no reservations, no chances of getting a peep in.

Our dinner this evening consisted of:

The deconstructed 𝘏𝘢𝘪𝘯𝘢𝘯𝘦𝘴𝘦 𝘤𝘩𝘪𝘤𝘬𝘦𝘯 𝘱𝘪𝘦, which required one day’s advance order. There is also another pie - the unique Penang-Hainanese macaroni pie, but we were discouraged from ordering that by Mrs Tan, as their family-sized pies were made to serve 4 to 6, and would’ve be too much for our dining party of 3.

The deconstructed “chicken pie”, where the puff pastry were baked and served separately from the stewed chicken filling. Delish with a splash of Worcestershire sauce & cut red chilis. 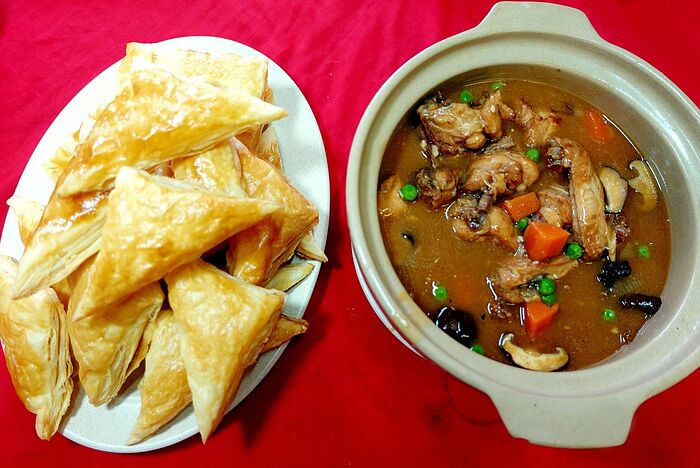 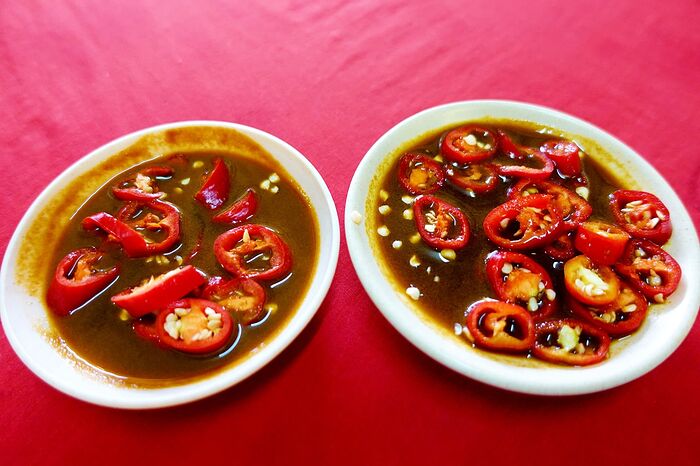 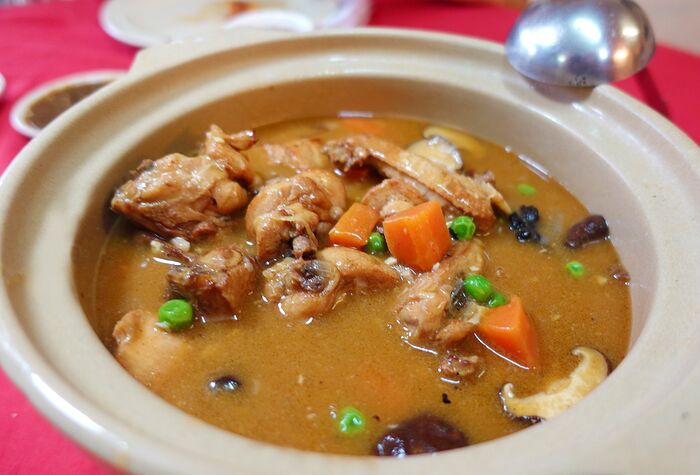 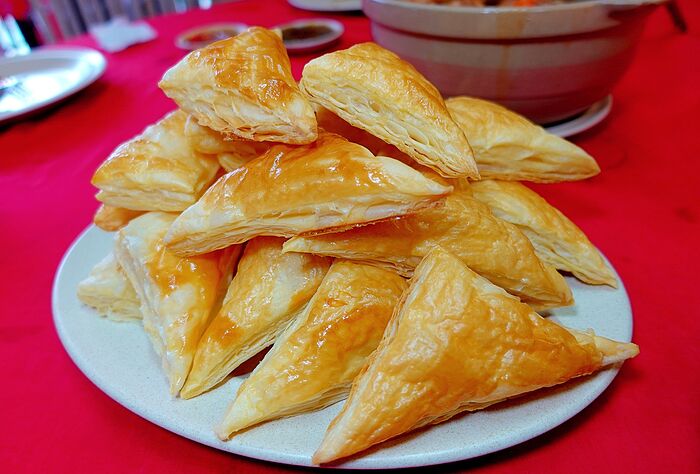 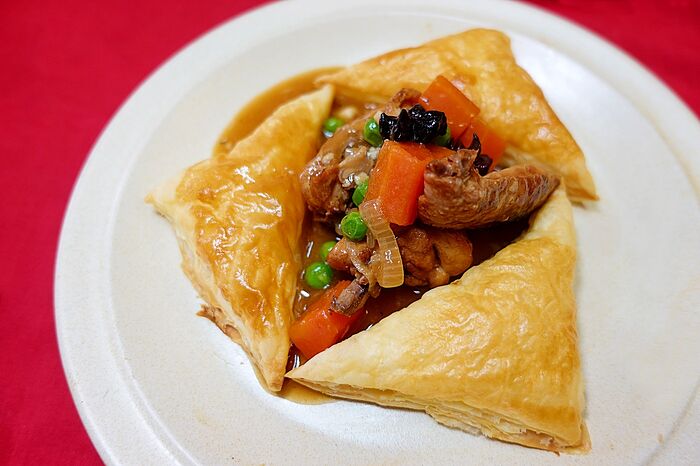 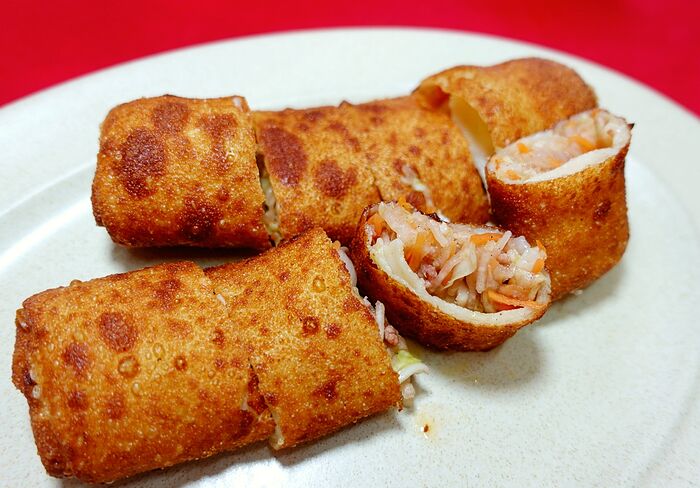 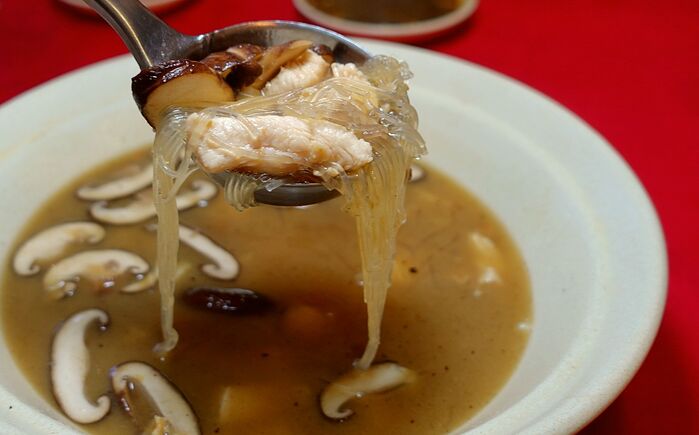 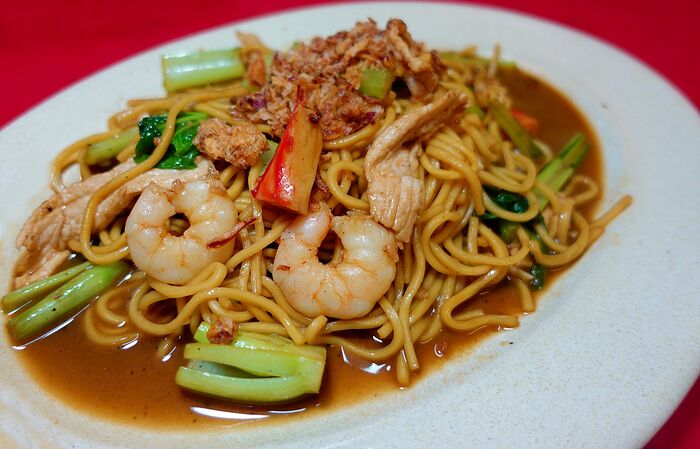 Very good food. We talked to the Tans when the dinner crowd tapered off, and they spoke glowingly of their only son, who now lives with his own family in Australia. and their plans to retire and join him there eventually. In the meantime, we get to enjoy the food at one of the last bastions of old-school Hainanese cooking in Penang.