From the U.P. of Michigan… 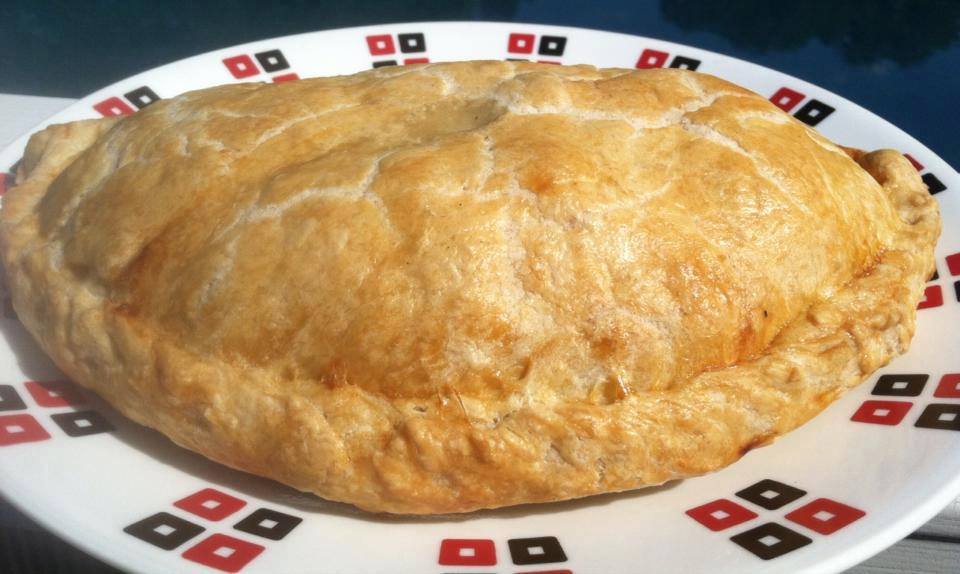 Ketchup or Gravy: A Pasty Story

Few things are debated more in the Upper Peninsula (UP)  than what to eat on your Pasty, but we should talk about what a Pasty is before we get to the all-important question. Chopped meat, potatoes and/or rutabaga, carrots, and onions are...

…in the meantime, let’s talk about crimping. In the link, the pasty is side crimped - which is how a Cornish pasty has to be if, within the European Union, it wants to be called a “Cornish” pasty - as the “Cornish pasty” now has Protected Geographical Indication (PGI) status within the 28 countries. Your guess is as good as mine what happens when the UK leaves the Union - most probably at the end of this month. Certainly it is something that is pissing off the pasty producing industry which has worked long and hard for this recognition. That said, top crimping is very common in Cornwall - but producers who have made their pasties like this can no longer call them Cornish pasties - even though they are pasties made in Cornwall and, in all other respects, are made the same as a side crimped pasty. Whenever I make them, I top crimp - which is the usual way in neighbouring Devon.

Now, as for what to have with them. Assuming we are having home made for dinner, then my usual accompaniment is a tin of baked beans. I may tart up the beans with the addition of something punchy , such as English mustard, but usually I eat the beans “as is”. On the other hand, Mrs H usually regards a pasty dinner as a light meal and just has hers with HP Brown Sauce. However, bear in mind that the pasty is primarily designed as a handheld snack (you’ll often find pasty sellers at major UK railway stations). As such, it would not be common for anything, and certainly not gravy, to be anywhere near it - not even if you were a Cornish tin miner who didnt mind if something sloshed down the front of your overalls.

Does the top crimp make any discernible difference, or was it just included in the definition at the time?

More on this Michigan marvel. 13 U.P. pasties you must try on your next visit

John Gonzalez and Amy Sherman of MLive spent a week in the Upper Peninsula of Michigan searching for things to do, eat and see. Call them Yooper Troopers. Here is a list of 13 pasties you must try on your next visit!

However, bear in mind that the pasty is primarily designed as a handheld snack (you’ll often find pasty sellers at major UK railway stations). As such, it would not be common for anything, and certainly not gravy, to be anywhere near it

Does the top crimp make any discernible difference

I’m a northwesterner so have no regional affiliation with either Cornwall or Devon. I’ve been making pasties so long that the recipe I still have is in ounces rather than grammes (which probably puts it into the 1970s). The method is for top crimping, so I’ve always done it that way, and I reckon it’s easier to bring the pastry together, without losing the filling.

Interesting how close these are to the Bierocks of the Plains states, courtesy of
German Americans.
Except those are always beef and cabbage

,
but the idea is the same.

This is actually a mis-statement. An Authentic Cornish U.P. Pasty must always include Rutabaga.

As a native Michigander (Lower Peninsula), I have never had a pasty served with any kind of sauce/gravy - as Harters said, they are meant to be eaten by hand. Side crimping is absolutely the norm in MI. As for rutabaga, I don’t honestly know whether the starchy business inside the pasties I’ve had was rutabaga, potato or both!

An Authentic Cornish U.P. Pasty must always include Rutabaga.

Absolutely. I mentioned the pasty’s PGI status within the EU - apart from the crimping, ingredients are also specified - beef, potato, swede (rutabaga to you Yanks), onion, salt & pepper.

Personally, I tend to use carrot as well. And, from time to time, turnip instead of the swede.

Is it true that these were originally intended to be a conveniently packaged full meal, if not from soup to nuts, at least from entree to dessert, and so had a savory, meaty filling at one end and a sweet filling at the other?

That’s news to me, but I love the idea.
When the sour turns to sweet.

From the Wikipedia on “pasty”

"A part-savoury, part-sweet pasty (similar to the Bedfordshire clanger) was eaten by miners in the 19th century, in the copper mines on Parys Mountain, Anglesey. "

You won’t find this in Michigan.

Is it true that these were originally intended to be a conveniently packaged full meal,

There are certainly stories of this. But evidence seems much harder to find. It’s interesting that the Wiki entry linked to above, indicates a savoury & sweet pasty being eaten in North Wales. That may indicate that it’s a Welsh, rather than Cornish, creation or, of course, it may indicate that Cornish tin miners had moved to North Wales and brought their snack with them.

Also in the extract, there’s mention of the “Bedfordshire Clanger”, also said to be a savoury and sweet pastry. However, the Wiki entry goes on to mention that the only hard evidence is dated to the 1960’s, so it may be a fairly modern creation.

Just caught sight of a “nearby” us bakery advertising their meat pie creation. I have no idea why they are not calling it a Pasty… 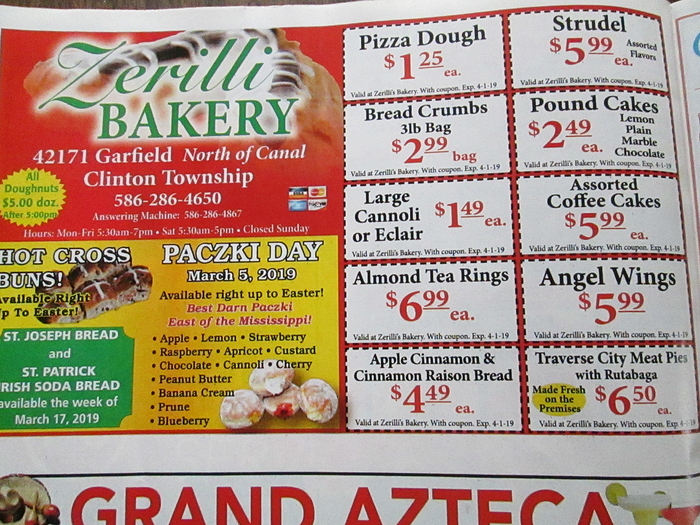 Why Traverse City?
And what are angel wings?
That made me wish I was there. Sometimes the West Coast can be lacking.

Maybe because it’s a meat pie, not a pasty?

If you have a good pasty, what do you need a sauce for?! If the pasty is inferior some ketchup might improve it, but it really shouldn’t be necessarily. That’s for a genuine Cornish pasty made in Cornwall, your mileage may vary further afield.

Maybe because it’s a meat pie, not a pasty?

What is weird is that Traverse City calls itself the Cherry Capitol. No one in Michigan would think of that city as a definitive “meat pie” producer.