I’ve eaten in the 6th many times but am looking for some new, excellent meals. I’d appreciate any suggestions, especially in the area of the Odéon Theatre, Rue Vaurigard etc.

Thanks for any help.

Restaurant L’AG is excellent. Huguette is good for seafood and oysters. Ze Kitchen Galerie is famous, so you probably know it. L’Avant Comptoir de la Mer is often mentioned, but I haven’t been yet.

Thanks for the ideas. I’ve been to Ze Kitchen Galerie - maybe 3 or 4 years ago. I wasn’t bowled over. Someone mention La Cuisine de Phillippe - a new name to explore.

I’ve been to Ze Kictchen Gallery a few years ago. Personally, some dishes were good, but I was disappointed at their attempt to reproduce the Chinese pork belly. How about AT ?

Atsushi Tanaka has worked in the kitchen of Pierre Gagnaire when he was 17. According to the site Honest Cooking, he continued his adventures in “Quique Dacosta (Spain), Pastorale (Belgium), and more recently he took himself back to school, interning for Scandinavian restaurants such as Geranium (Copenhagen), Bjorn Frantzen and Oaxen (Stockholm) and Oud Sluis (The Netherlands).” We can see that he got influenced from Japanese (especially his dessert), molecular cuisine, and probably Nordic and …

If you are willing to take a metro to go to Saint Placide (ligne 4) from Odeon, Quinsou is a pretty good choice, opened last autumn.

Supposedly to be a birthday dinner, a very good excuse to eat out. Here we go! A newly opened restaurant by chef Antonin Bonnet in the Montparnasse area. Bonnet was the ex-chef of the Sergent Recruter, he has worked as chef in Michel Bras, Morton and Green House in London etc. He evaporated from the cooking scene after the failure of the project La Rue Jeune. Long story short, LRJ was a promising project supported by the city and invested by a businessman, Cédric Naudon. The idea was to build a…

Yet to visit but isn’t la Mer, like the original L’Avant, a bar with a few stools serving tapas etc. My visit to L’Avant I found it full of people standing to eat and drink - lot’s of fun but not relaxing.

I am in Paris next month for just a Sunday night and was going to head over to the Haut Marais (although I am staying in the 6eme) because it seems to have a bit more buzz - think Shoreditch vs the Clapham area.

Thanks for another idea to ponder. I take the Métro so no problem, but I could walk to Quinsou from my hotel.

You should definitely try Ze Kitchen Galerie. For me, food is like art, and we all have different tastes and preferences. I’m probably a bit jaded being old and having lived near NYC most of my life and more recently (13 years) near London.

The second Breizh café is opened in Odeon 2 weeks ago if you like good craft cider and Brittany galettes and crepes. 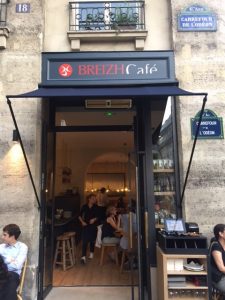 A.T. and Quinsou are both places that I’ve been planning to try.

For me, food is like art, and we all have different tastes

I never thought of it like that, but it makes a lot of sense.

Oh, that’s great, naf. I was at the Breizh near the Picasso Museum about 2 years ago and loved their food. I will definitely try to have a lunch there. My usual hotel is right there, but I’m trying a new place this visit.

if you expand your search to the 7e, i really enjoyed my dinner at tomy and co this past march.

Thanks, Sam. The 7th is no problem. If not this trip, maybe on our next.

I thought I’d report back and let you know that we did grab a fast dinner at the new Breizh at Odéon. It’s a very small place, and I’d recommend booking a table. We didn’t but were eating fairly early. Even so, the tables were full at what seemed to me an unusually early time for Paris.

We had galettes that were cut into what looked like sushi rolls, and a great way to eat them! All the choices were good and I had one with Brittany sausages, carmelised onions and something else I can’t remember. Service was great.

I wanted to let you know that we had one dinner at Ze Kitchen Galerie, just four blocks from my hotel. It was one of the best meals I’ve had in a long time. I don’t usually eat quail, but that was my main course, and it was not only beautifully cooked but looked fantastic on the plate. My niece had a fish dish - also very delicious and the starters were out of this world. They were turning people away at the door, so I’m glad we booked a table.

Thanks for the update. I was planning to go to Ze Kitchen Galerie when we visit this fall, but now I’m tending more towards Ledeuil’s new place, Kitchen Ter(re). In an ideal world one would be able to eat five meals a day, but, alas …

Thanks for your report. Good to know that you have enjoyed your dinner. I haven’t been to the place yet, from what I have heard, it’s more a cider bar than a formal dinner place.
Do you still remember long did you need to wait for your table?

It looks like his new place are classical Italian dishes, am I right?