Back (sigh) from our Paris - Barcelona - Paris 3 week trip, so time for some meal reports: 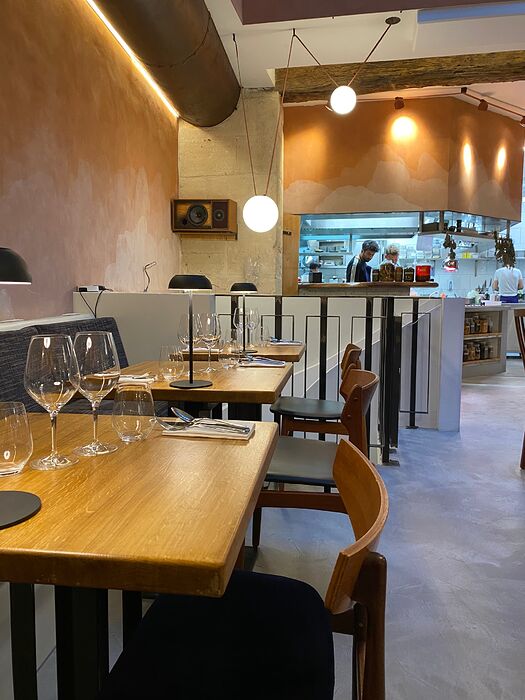 This was our first meal back in Paris post pandemic-shutdowns . Each person chooses four or five courses total from the menu. Other than the desserts, we pretty much tried one of everything on the menu that night.

The amuse was tempura-ed broccoli in an Asian sauce - nice. 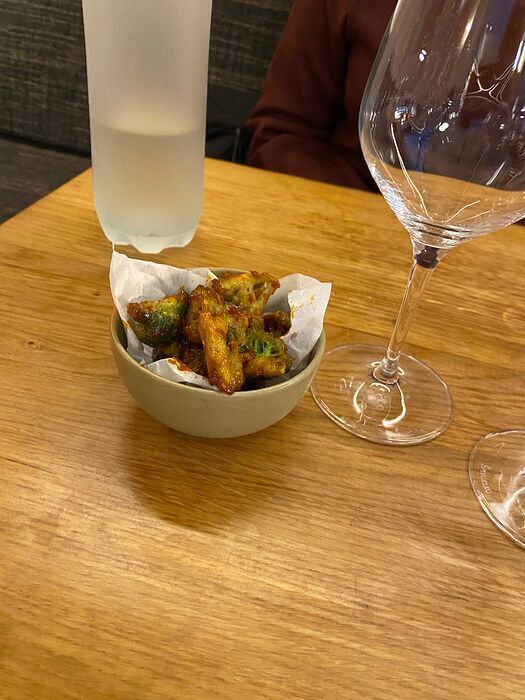 The first courses were without question the best.
A red pepper sorbet with zucchini and cucumber blend - like gazpacho but wonderful texture contrasts. Fantastic, and a prime reason we go to great restaurants: 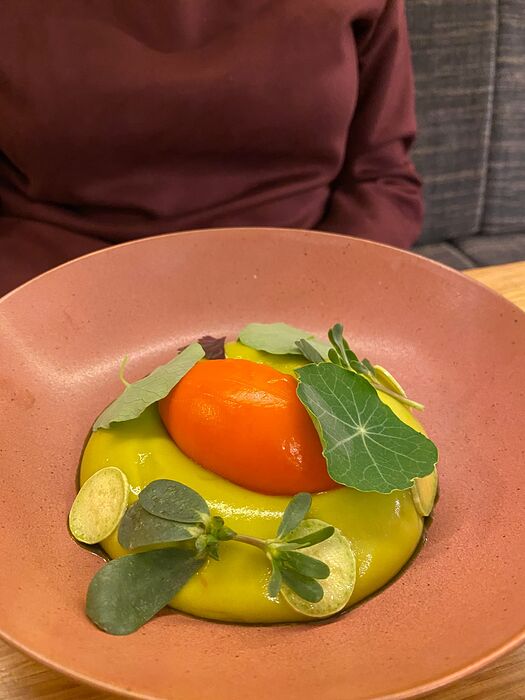 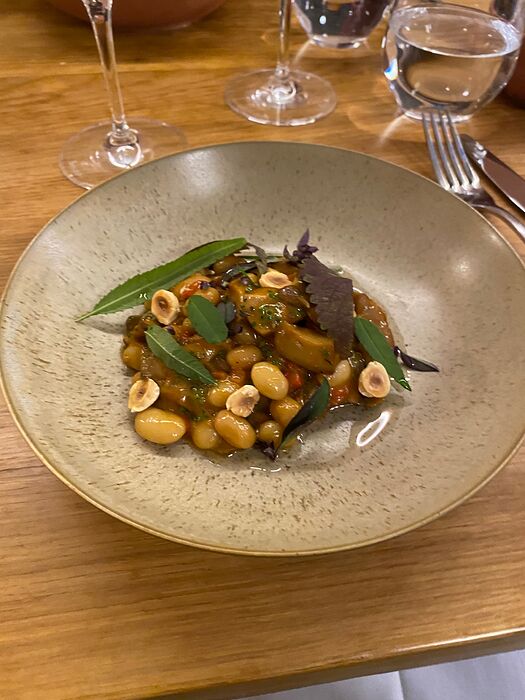 Eggplant with crisp onions in a sesame/shiso sauce: 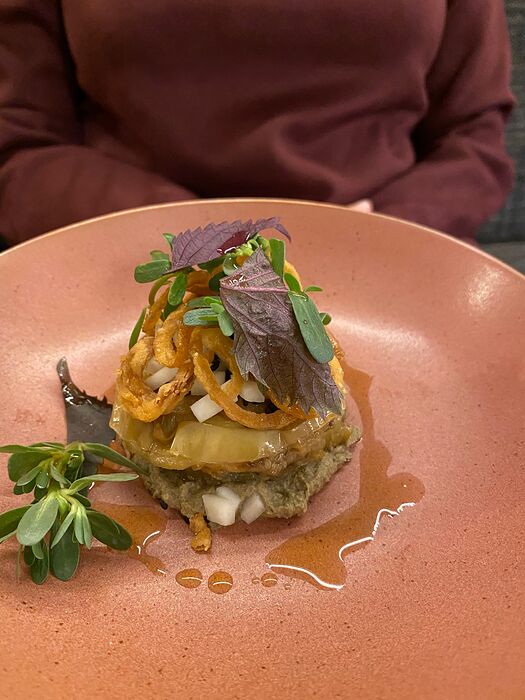 The 2nd courses were less successful.
“Mochi” dumplings with onion and seaweed, and mushroom agnolotti. Both just ok 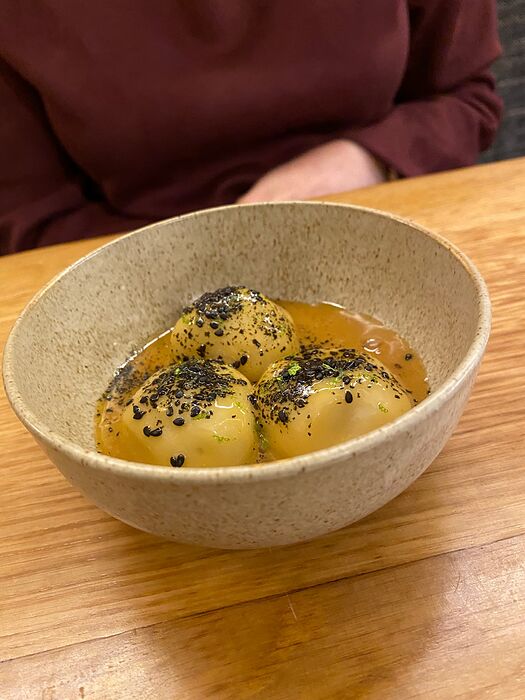 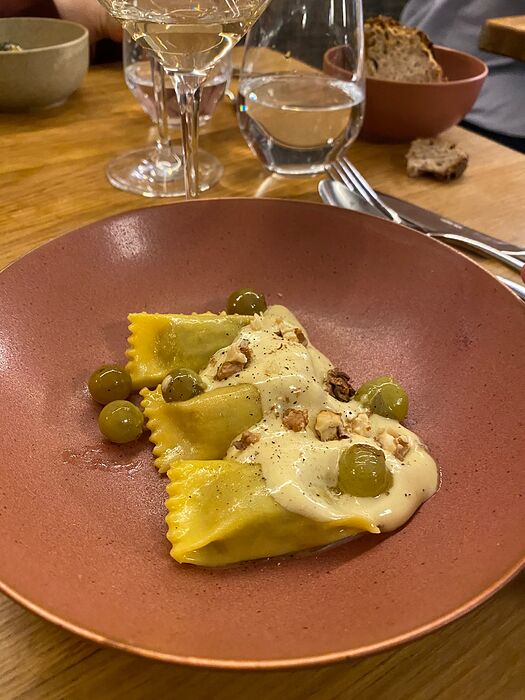 The dish on the menu I was most looking forward to was the oysters with Camembert cream, but IMO it didn’t “work”. It was the rare dish in Paris where the sum was not greater but actually lesser than the parts. 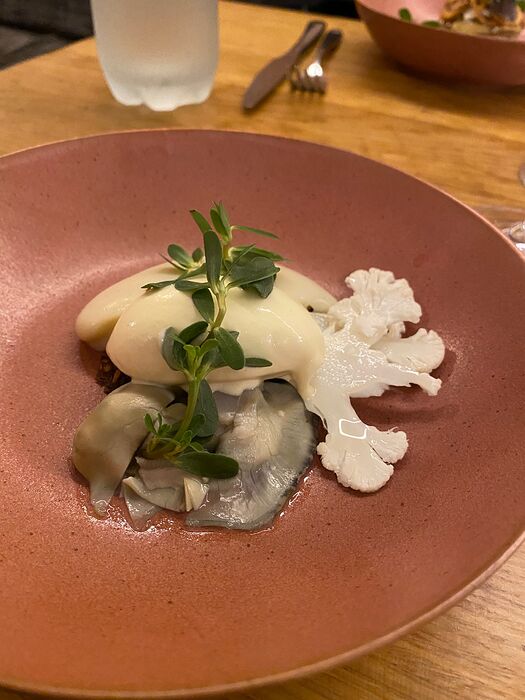 The fish course was smoked trout in a miso sauce. It would have been much better as an appetizer to share among 2 or 3, rather than a main as we’d assumed it would be. 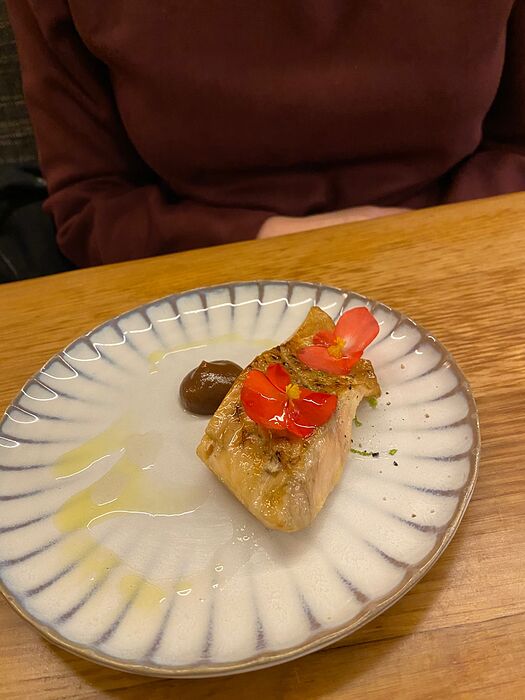 The other “main” was chicken with corn foam. Very good. 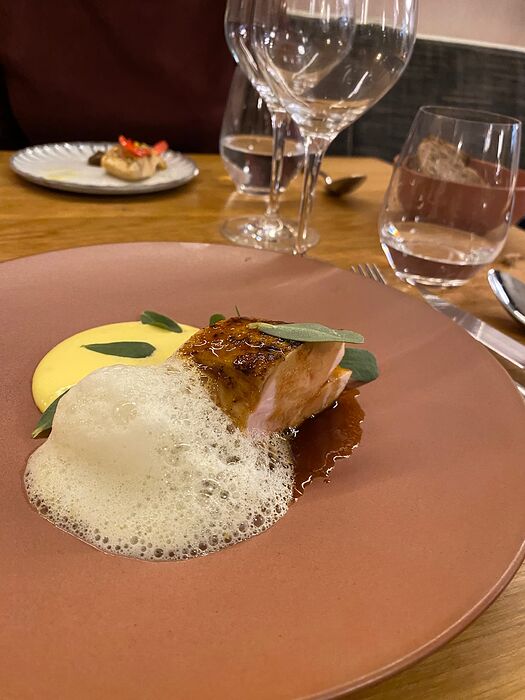 We skipped dessert, but I did have some cheese to finish. It was a Morbier with berry jam and mustard seed accompaniments. I usually prefer my cheese plain, but the accompaniments combined here turned an ordinary cheese into a much more satisfying experience. 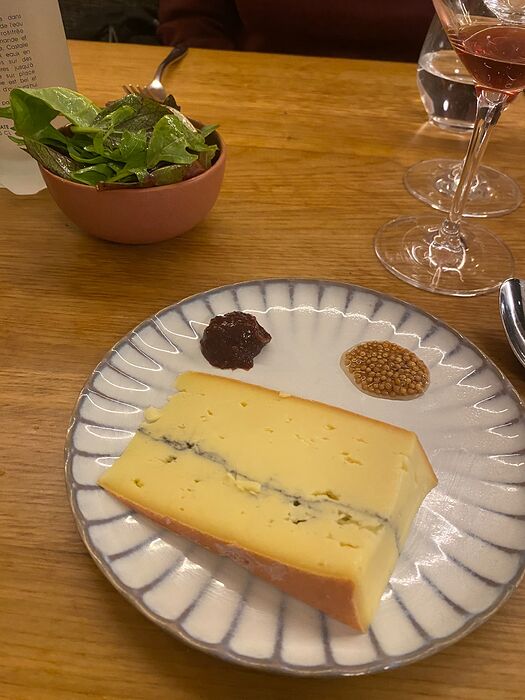 At 52E for 4 courses, 62E for 5 I thought it was an an excellent value, and we’ll probably return. Overall, thought the food very good, but as another HO poster commented, after the first courses, it went a bit downhill and certainly nothing else “wow-ed”.

The next day lunch was a return to Montée. While nothing there was a “wow”, either, at 55E it’s another excellent value. I already posted that report here:

Dinner that night was at Huguette. I decided I’ll write up all my oyster meals in a single separate post.

Lunch the next day was Breizh Café. This is one of my wife’s favorites. Very good and pretty much as I remembered it. Nice to have a sit down meal that cost no more than upscale fast food to go does now here in CA. Plus, we love the Breton caramels they bring with l’addition. 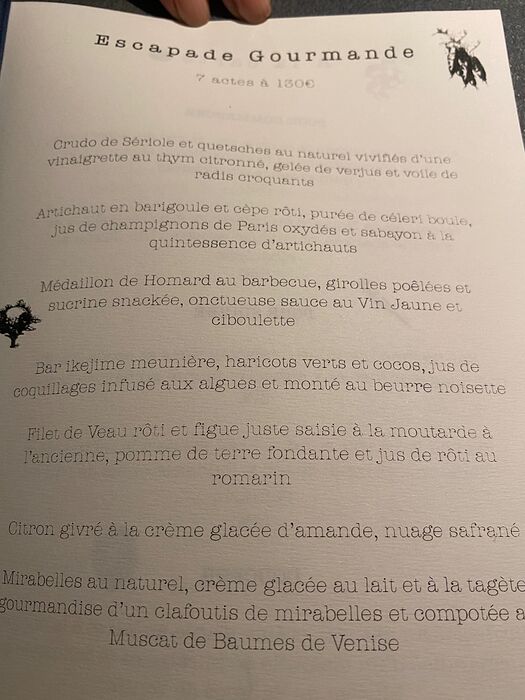 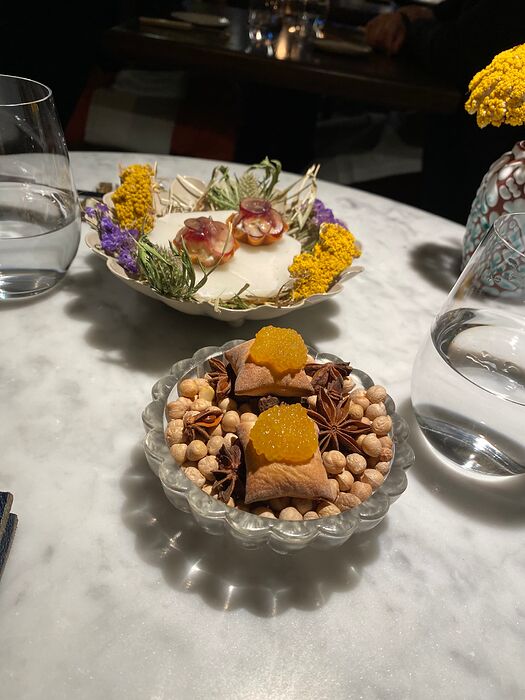 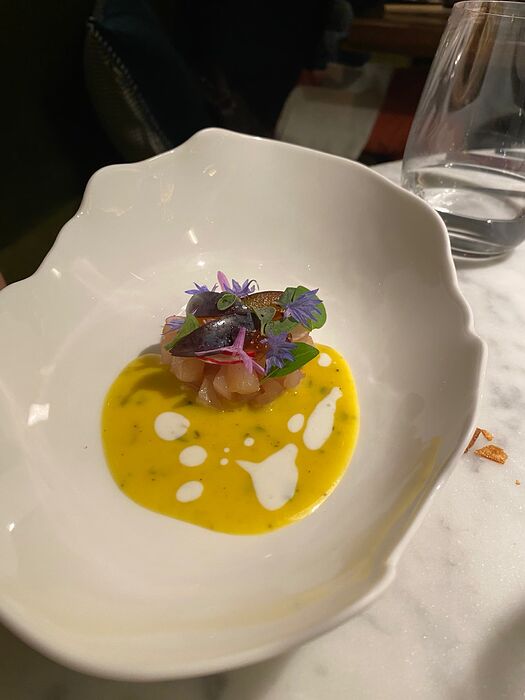 Next was artichokes and cepe. The mushroom was the star, but this dish didn’t feel innovative at all. 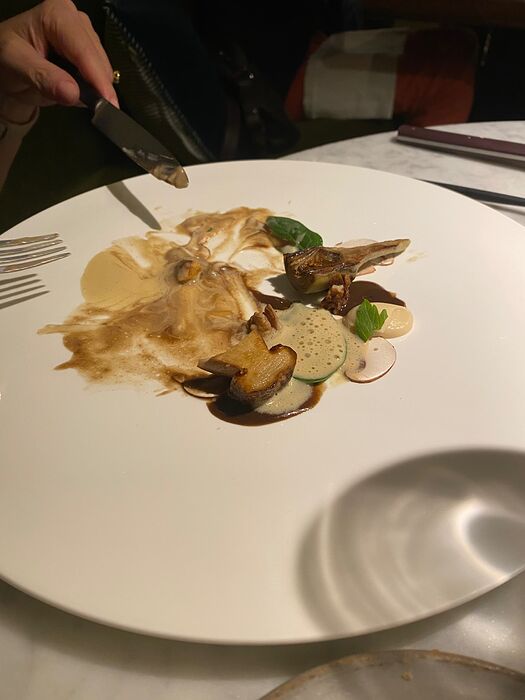 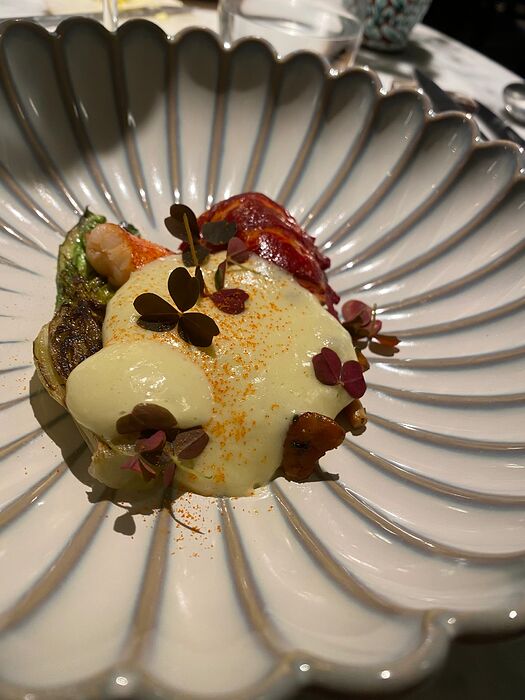 Next was sea bass with haricots vert and more cocos. Tasty but not innovative 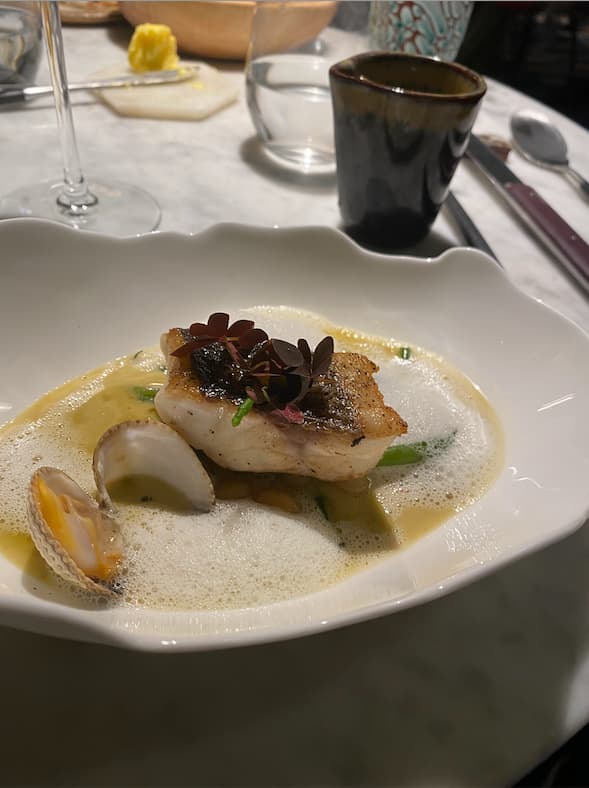 The meat course was a spectacular roasted, lightly smoked filet of veal with a sweet onion and potato accompaniment that I will remember for a long time. 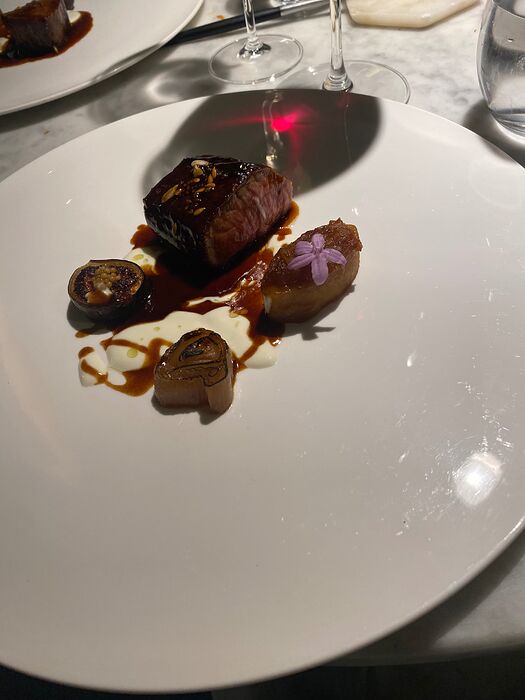 The first dessert was a refreshing lemon ice/sabayon in a hollowed out half lemon. The second was plums with a delicious ice cream. 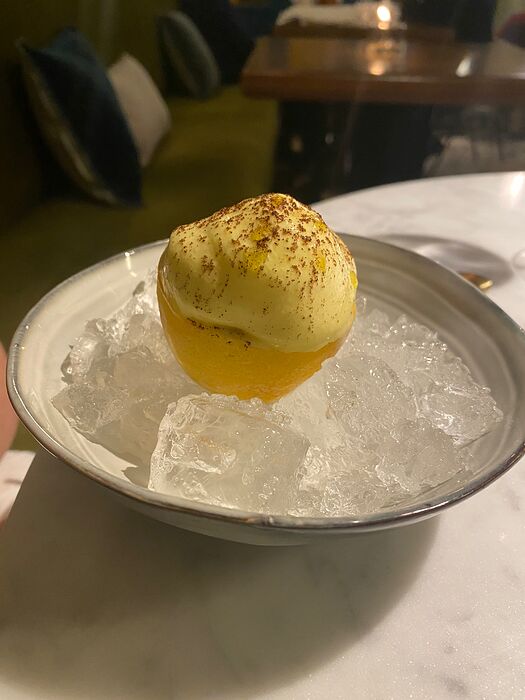 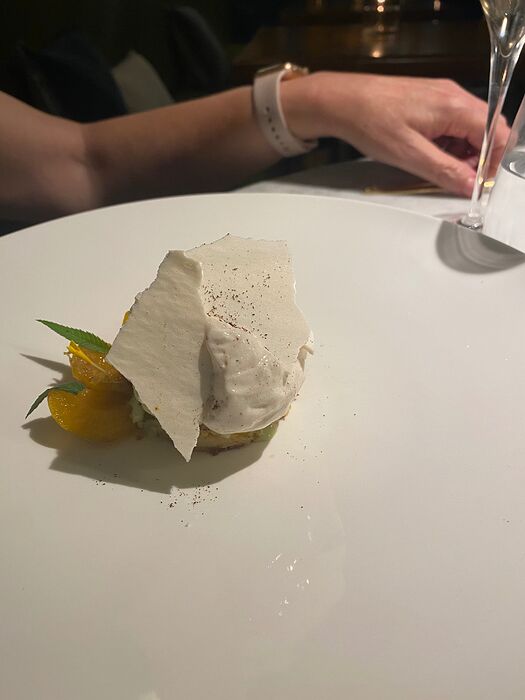 The mignardises to finish were unremarkable.

I thought our Virtus meal was the opposite of Jeannne-Aimée: not the strongest start but kept getting better all the way through to the meat course. And while only the veal was a “wow”, the experience was very enjoyable, and we will definitely return.

Mordu
Lunch the next day was Mordu. Entree/plat/dessert for 40E
Appetizers were a chicken and mushroom ravioli, and a gazpacho and sea bream tartare. The cold tomato at bottom helped make the dish. For France, a surprising amount of garlic in the dish 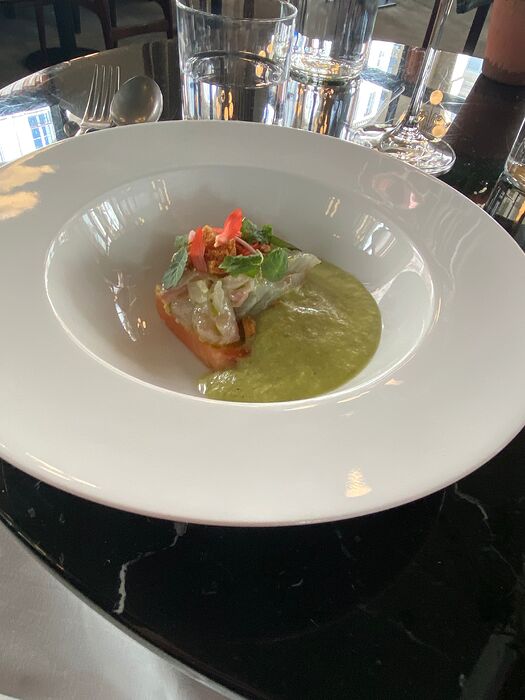 My wife’s main was a red mullet which she didn’t like at all, but I thought was ok. The tempuraed sweet potato accompaniment was really nice. I had duck breast with beets. Just good (by trip’s end we definitely tired of all the beets chefs are using this fall).

The desserts were better: a chocolate ganache with a mint cream sauce, and a financier with rum ice cream and figs 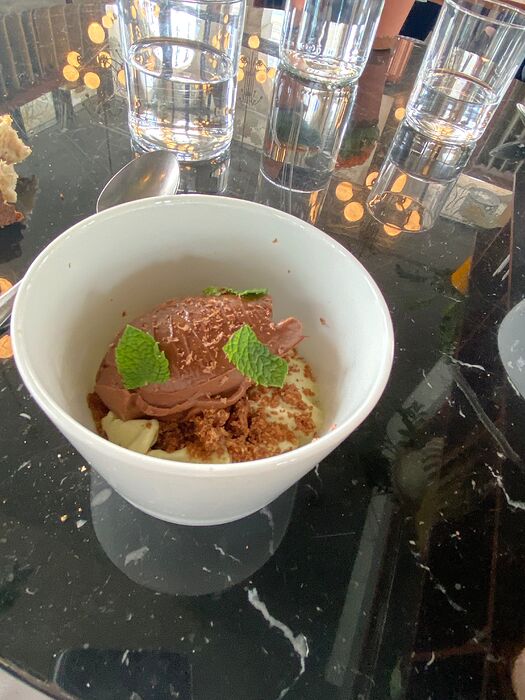 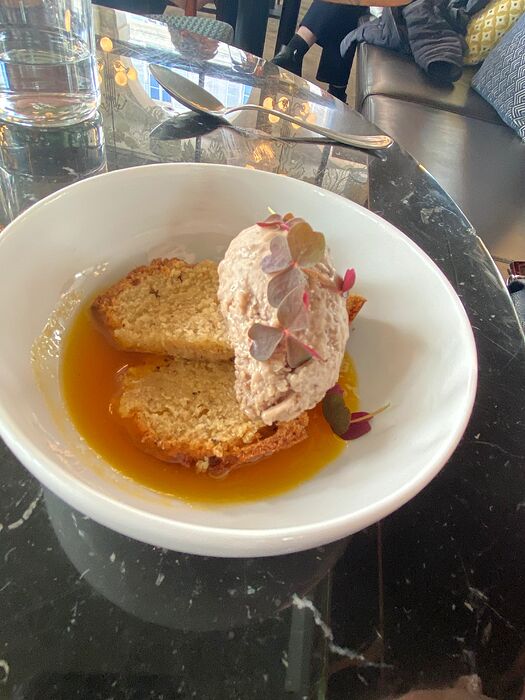 Overall, it was fine, but except for the desserts nothing noteworthy. We’re unlikely to return.

A great report. Many thanks.

I rate a restaurant by “overall enjoyment” and not just food on the plate. Therefore, I am much more tolerant of the odd dish that doesn’t sing to me in a tasting or small plate menu. In this respect, I like Jeanne-Aimée much more than you seem to have liked it. I should add that the menu changes often and, while I don’t have total recall of what I ate, not many of the items that you ordered were on offer the night I went.

Been to both Jeanne-Aimée and Virtus, I like J-A much more than Virtus. My Virtus meal was in October, the food wasn’t memorable, probably due to the stress that the restaurant had to be empty by 21h as there was a covid “curfew” of 22h (2 years ago), everybody needed to be home! The stress the restaurant tried to rush a tasting menu ruined our experience. They brought out several dishes all at once rather than the usual well-pace courses. One just couldn’t enjoy a fine dining meal in a fast food pace. Meanwhile, it seems there was a team change.

My J-A meal in mid June was a rather enjoyable experience, sauce was really good, except maybe the repetition of ice-cream, 3 times in 3 courses! I don’t remember they had a tasting menu, was it something new? Also, our 3-course meal was about the same price as your 5-course meal.

We have had two excellent meals at Virtus. Pre-Covid and during Covid.

Had to say, I really like the decoration of the restaurant, more memorable than the food. The chefs changed, no? There was the Asian cheffe cooking, I remember.

The last time we were there was last January, and the food was quite good. But I cannot remember what we ate.

BTW, don’t know if anybody is visiting Paris now or next week. Shouldn’t be fun, as there is gas shortage due to strike. H tried to find a taxi yesterday for a longer distance trip and was refused several times by drivers due to gas panic. I worry we will have food shortage in shops later in the week.

What you write is worrying. We would like to vist Paris at the end of November… But if taxis are not available, we won’t be able to come.

Check the news often, we will probably know later this week if it’s an individual strike (for salary increase) or this thing is changing to a general strike. As I’ve heard today, some workers in the nuclear plant EDF are also striking. Government are trying to push out its very “popular” retirement plan and have it got voted before end of the year, no idea how this thing will turn out. Usual retirement is a hot topic here.

In this respect, I like Jeanne-Aimée much more than you seem to have liked it

I guess I didn’t do a great job of communicating then. Despite not being wowed after the first courses, we liked the meal very much. And the creativity and qualité-prix were such that we’re very likely to return (unlike to Mordu). I loved the fact, e.g., that I got to try that oyster with Camembert cream dish on the menu even though I didn’t think it happened to “work”.

Jeanne-Aimée was probably in the top 30%-40% of meals we had in Paris, I’d rank it higher still given the qualité-prix for dinner, and I’d recommend it to anyone. It’s just not (yet, at least) made it to my absolute must list (i.e. where Pierre Sang Oberkampf and now Les Parisiens are)

That said, in terms of “pure vibe” of the room separate from the food I’d only rate it slightly above neutral - at least for the Monday night we went. Nothing specifically wrong with it, but little that inspired me, either.

I don’t remember they had a tasting menu, was it something new?

J-A wasn’t a tasting menu. Each person chooses any 4 or 5 courses from the total of 12 or 13 dishes [including cheese and dessert courses] they had on the menu the night we were there.

If you wanted you could eat nothing but starters, or nothing but cheese and dessert. To me it was much closer to being “French tapas” than being a tasting menu.

I loved the format, and for me it’s a very welcome alternative, even though we also enjoy going to a few tasting menu meals as well.