I visited Paris for the first time at the end of April. What a beautiful city! And what great food and pastries and sweets you Parisians have. Here is a very late report of some of the restaurants that I dined at.

Went to L’As du Fallafel in the Marais (where I was staying) for a late night falafel sandwich at around midnight on Sunday. It is a bit touristy but I am a tourist. At that time there was no line.

It was a very good falafel sandwich. Enclosed in a pillowy pita and stuffed to the brim with very good smallish crispy falafel balls, baba ghanoush, various pickles, lots of tahini sauce and hot sauce, and lots of other veggies that I had a hard time making out in the dark. Probably a great sandwich for vegans. They give you a fork to work on the filling a bit as the sandwich is huge. A good sandwich and worth trying. I would probably not wait in a long line for it again though. 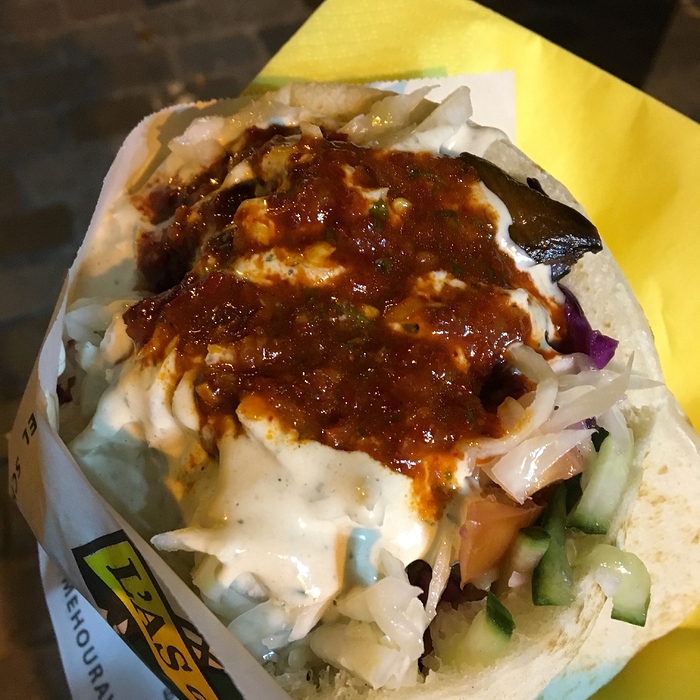 I went to the Breizh Café in the Marais for lunch. It’s very popular and small. I had made a reservation online a couple of weeks ago on their web site, but they didn’t have me in their book for some reason. Bizarre. Luckily there was a table available. I think I saw them turn away someone who didn’t have a reservation so it may be a good idea to book in advance.

Breizh Café specializes in Breton galettes, which are buckwheat crepes from Brittany (Breizh means Brittany in Breton). I had a galette complète, which is a buckwheat crepe filled with raw milk comté cheese, ham, and a fried egg. I thought this was delicious. The crepe was a little crunchy and had a slightly grainier whole wheat-like texture than a wheat flour crepe. The ham and cheese were both good, with the comté having a little funkiness. The egg was runny. It also was topped with a pat of some very good butter.

I also had a bowl of their house cider which was very nice, though I probably should have gotten a carafe as it was a little small.

English Menu (guess they get a lot of tourists) 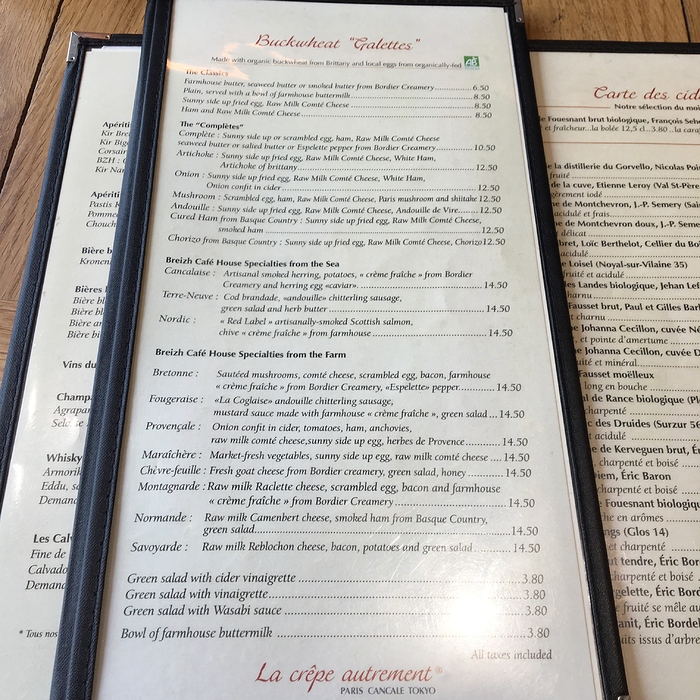 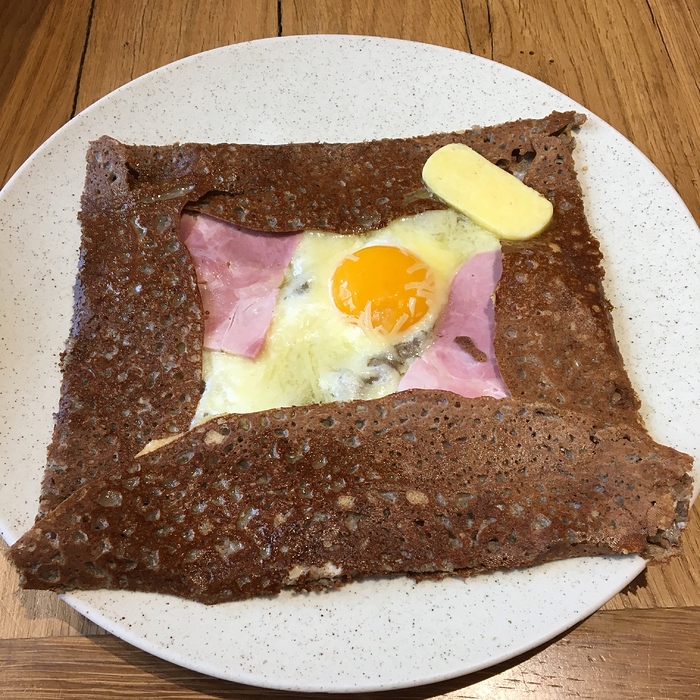 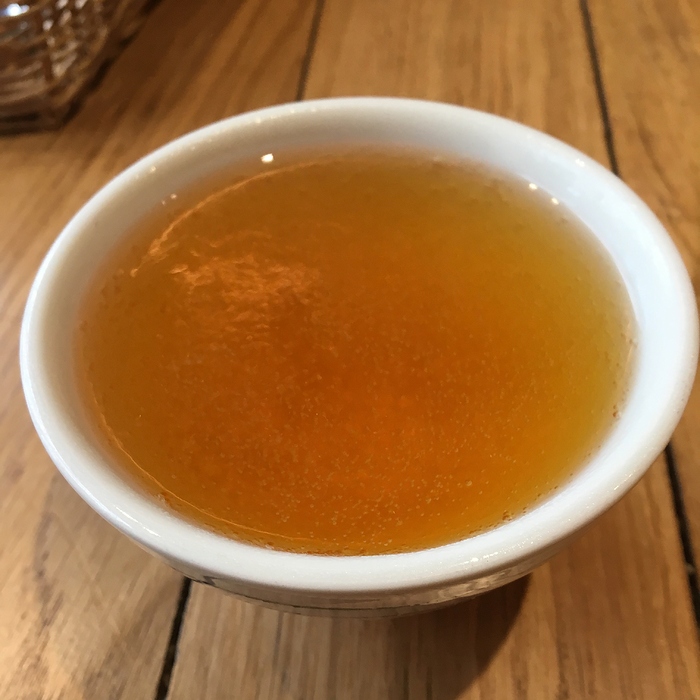 This is chef Tomy Gousset’s (of Tomy & Co.) small plates restaurant, named after his son. I had tried to book his other restaurant Tomy & Co. for this trip, but they were full. Walked in without a reservation and managed to get seated at the bar. The chef was in the house that night. I wasn’t super hungry so just had a couple dishes.

Ossau Iraty des Pyrénées, confiture de cerise noire & piment fumé (€7)
One of the chef’s signature dishes is Ossau-Iraty cheese with a sweet topping so I ordered this. 6 generous rectangles of Ossau-Iraty topped with cherry jam and dusted with a bit of smoky paprika. Ossau-Iraty is one of my favorite cheeses. Interesting mix of salty-smoky from the paprika, rich cheesiness from the Ossau-Iraty, and sweetness from the jam. A bit of a mistake on ordering on my part as I think it is probably best shared. It was a generous portion with a good bit of the same kind of cheese so I got a bit of taste fatigue and didn’t finish it. 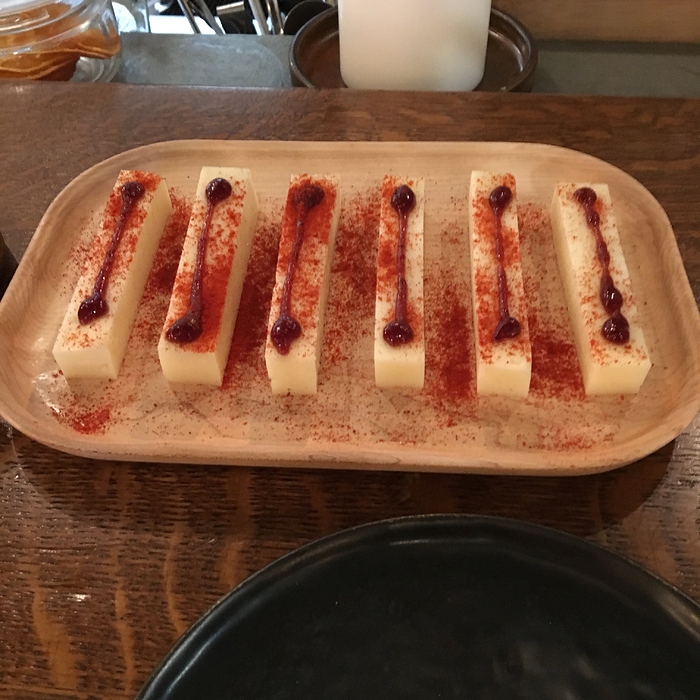 Porc fermier pané & œuf bio, riz noir & choux rouge, sauce au curry (€19)
This was their version of a Japanese tonkatsu curry. A fried breaded pork cutlet, sliced into strips, on top of a mildly spicy Japanese style curry sauce. Topped with a nicely fried egg and some chives. Very good. The pork cutlet was tender and crispy on the outside. The Japanese curry was flavorful though had a little bit of browned chocolatey bitterness that I don’t usually associate with Japanese curry. It was served with a side of firmly cooked black rice with some pickled red cabbage. Not bad but I think I prefer just a plain white rice with my katsu curry. 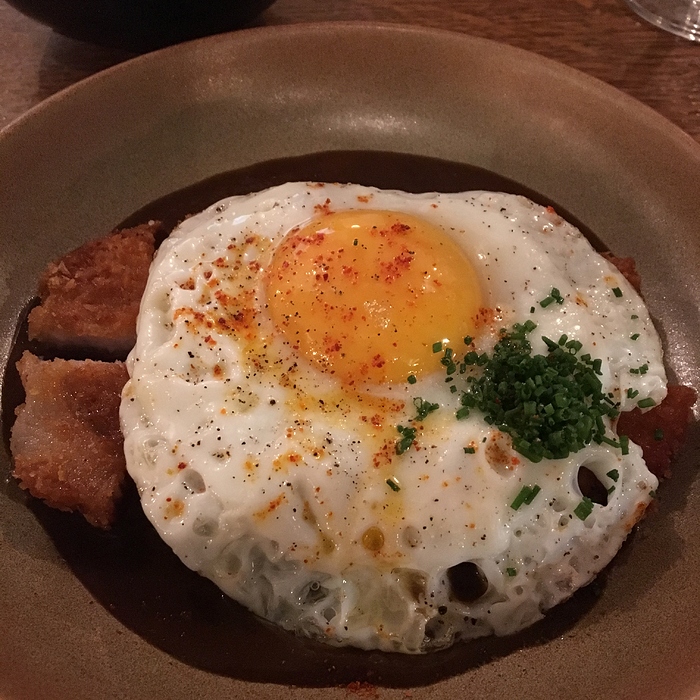 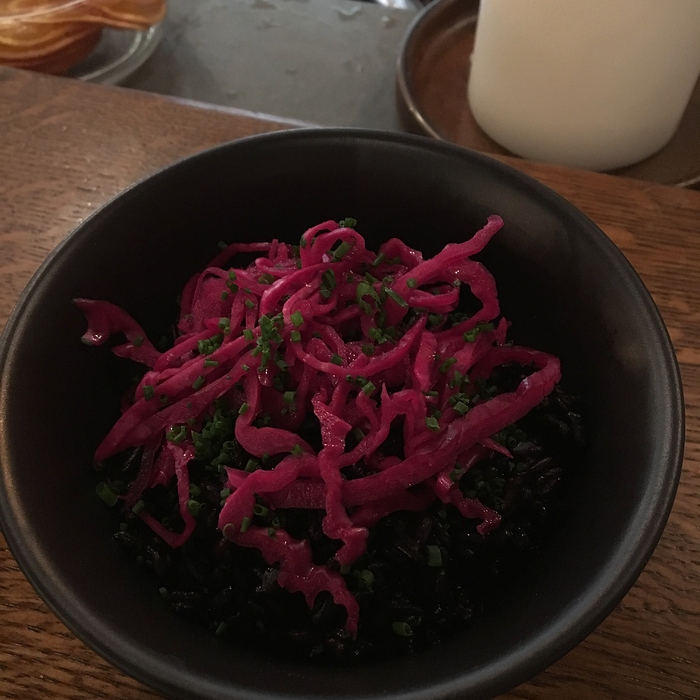 Overall I enjoyed the meal but I think I ordered the wrong entrée. Also, prices were quite reasonable.

I had a lunch at La Bourse et La Vie, a bistro owned by American chef Daniel Rose, who also owns Spring and Chez La Vieille in Paris and Le Coucou in NYC.

Bread, which came with a creamy herb spread. 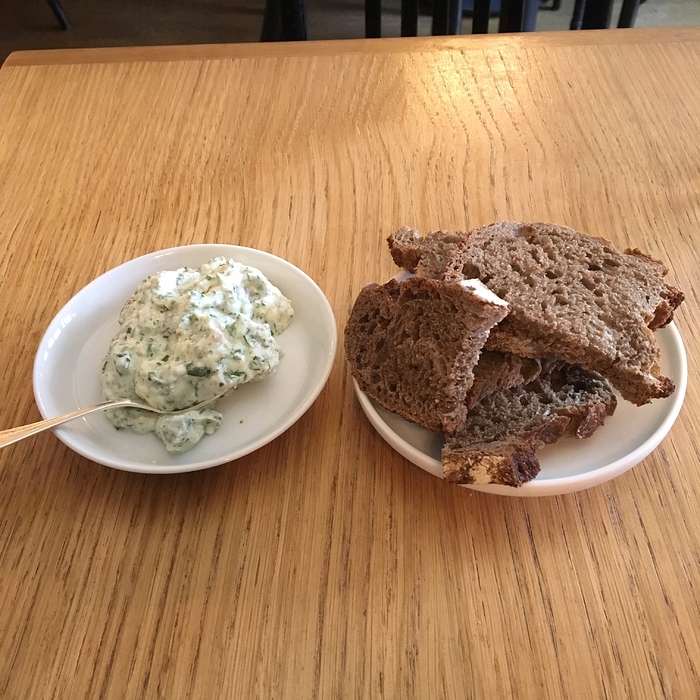 The plan was to try their steak frites. There are two steak frites on the menu, one with an un-named cut and a 30 day aged entrecôte (ribeye). Was still a little jet lagged at this point without a big appetite, so I just had the regular steak frites (€29), which was quite good. I’m not sure what the cut was, maybe a sirloin. It was a good steak - cooked à point to order, quite beefy but a bit lean. I think I probably should have gotten it rare due to the lack of marbling, but it was fairly tender anyway. Nice crust on the outside, and covered in a rich creamy peppery sauce with whole peppercorns. It came with some very good fries, medium-large cut, crispy, and tender in the middle. A large portion of frites that I couldn’t finish. A well executed steak frites. 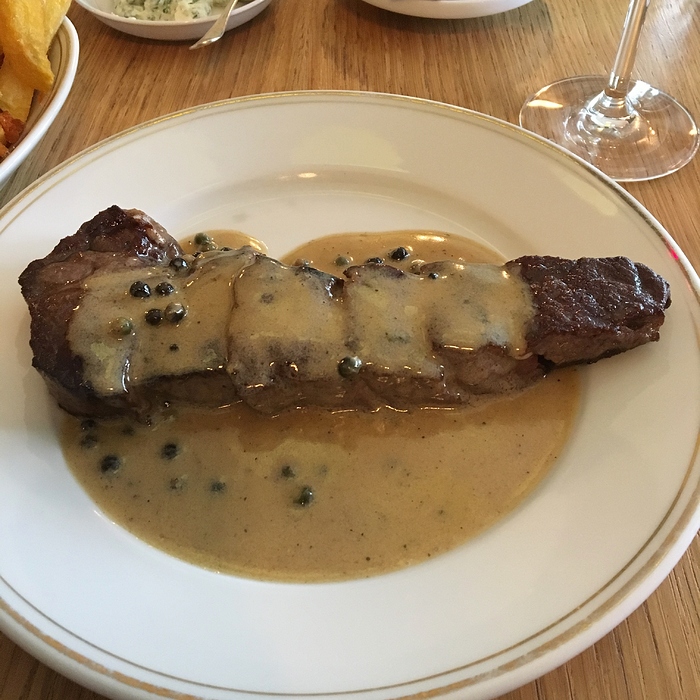 Verjus is a restaurant from Americans Braden Perkins and Laura Adrian. The main restaurant serves a tasting menu only, but they also have a small wine bar downstairs that accepts walk-ins only and serves wine as well as some small plates. I went here for a light dinner after visiting the Louvre on a Wednesday night when the museum closes late. It’s a short walk from the Louvre.

Asperge Verte (€3)
A couple stalks of asparagus with a creamy savory sauce, topped with almond slices. Canard Fumé (€9)
Smoked duck with a few white asparagus pieces. Really tasty. Slices of salty smoky duck breast with a strip of fat and skin on one side. A good sized portion and a very good snack to drink wine with. 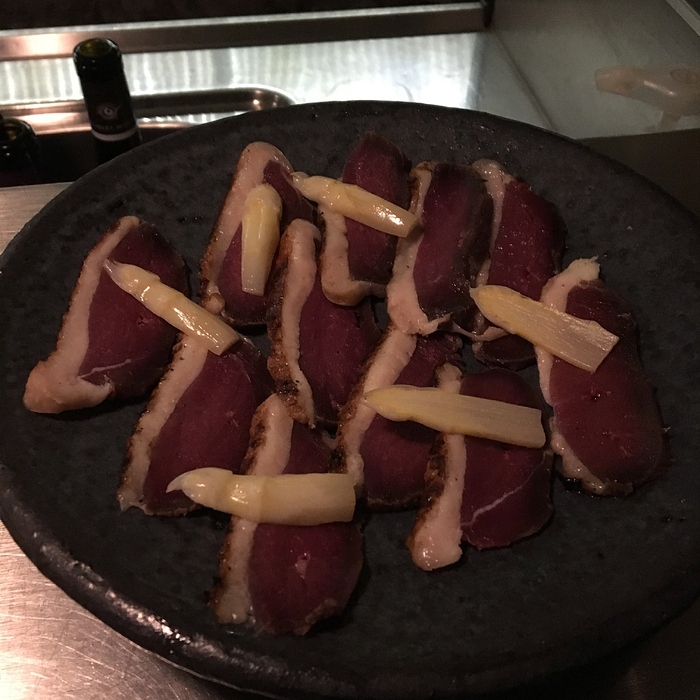 L’Assiette is a classic bistro located in Montparnasse. I walked in here without a reservation. At the front of the restaurant was a table with a leg of ham, from which a few pieces were carved as a free appetizer. The specials of the day were listed on a board that they brought over.

I had the velouté of the day (€11), which was asparagus and poured at the table. Good, rich and tasted of asparagus. For my main course I had their cassoulet (€29), which is apparently one of their signature dishes. This was great. Served bubbling hot in a large earthenware bowl, it had a nice crust on top and a large meat complement. It had a couple types of sausage, some duck confit (I think), some pork belly, and some nicely cooked beans in a rich sauce. It was a huge portion though, and I couldn’t finish it. Really enough for two people. 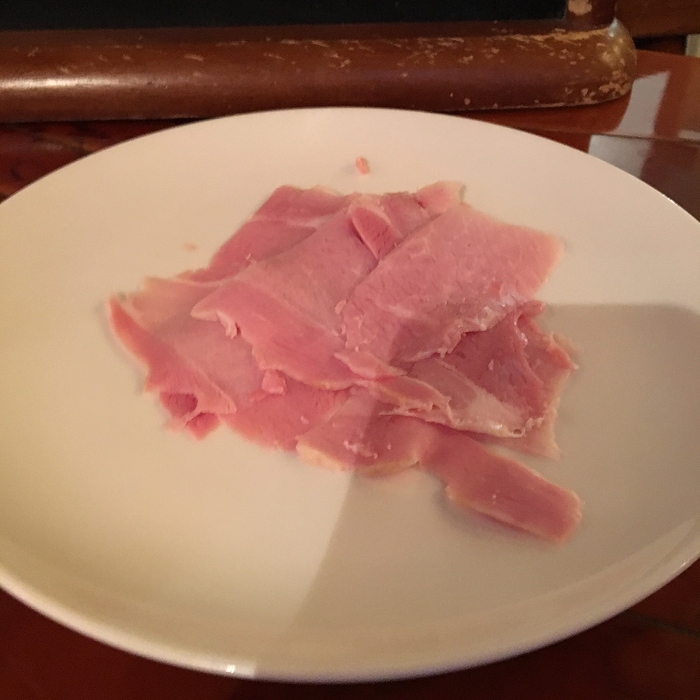 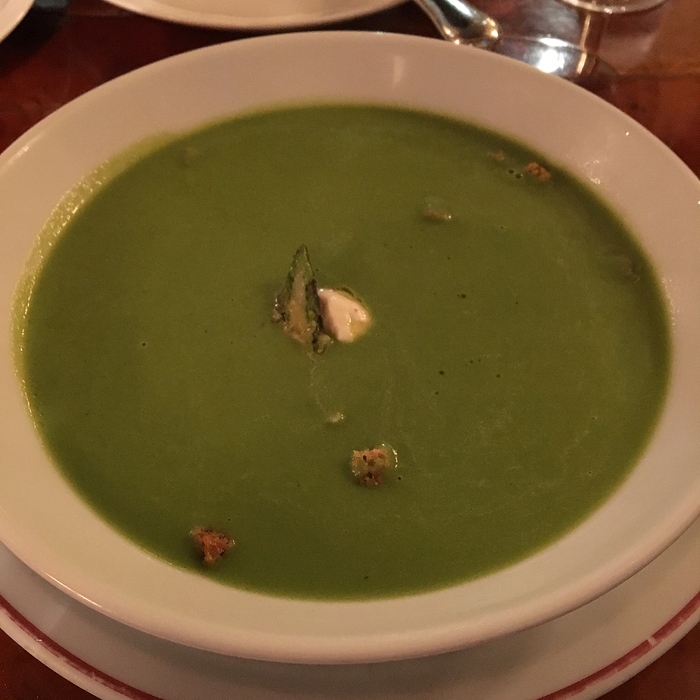 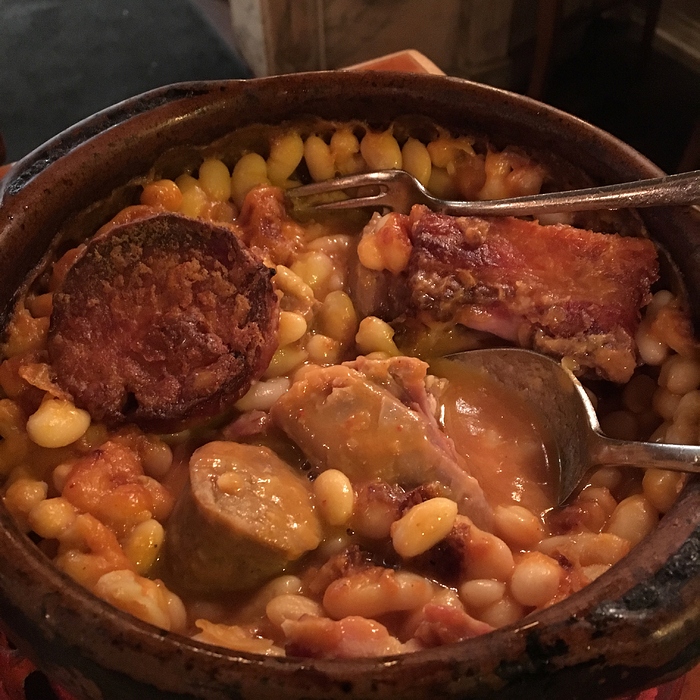 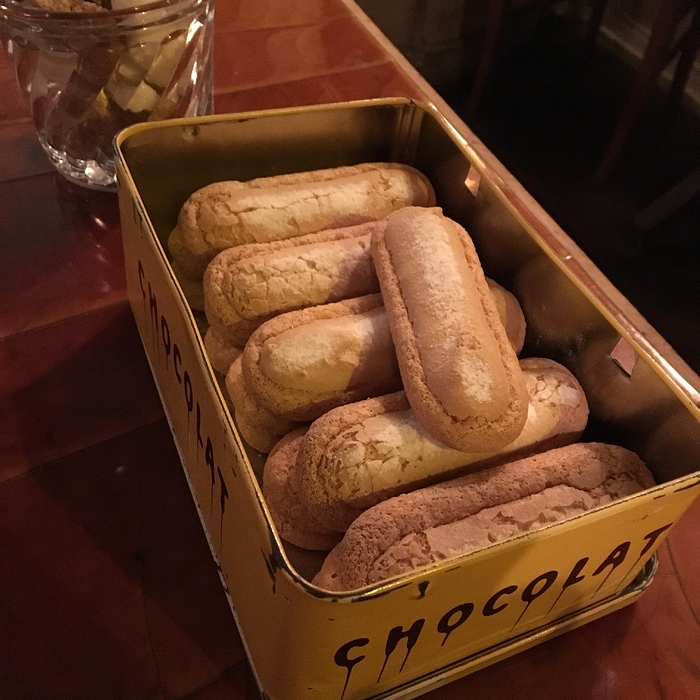 Le Petit Vendôme is a bistro near the Palais Garnier opera house. I had just seen a show at there and was looking for a restaurant nearby that was still open. I believe this restaurant is usually recommended for their lunchtime sandwiches rather than dinner, but I gave it a try anyway. Interestingly many of the other diners that night appeared to be Japanese tourists.

English Menu (only the first page) 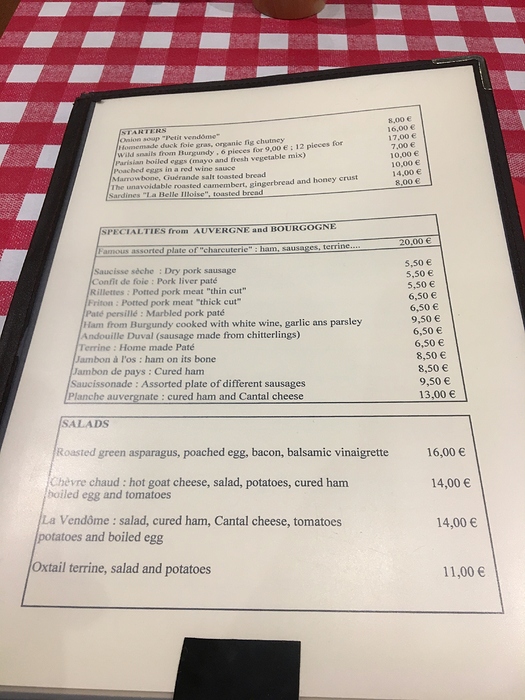 Good foie gras terrine slices with a slice of toast and a sweet fig chutney. Not a huge portion. I haven’t had many duck confits, but this was one of the best I’ve ever had. Very crispy fatty skin and tender fatty meat. It came with a small salad dressed with a very mustardy vinaigrette and some delicious fried potatoes with onions and mushrooms that tasted like they had been fried in duck fat. 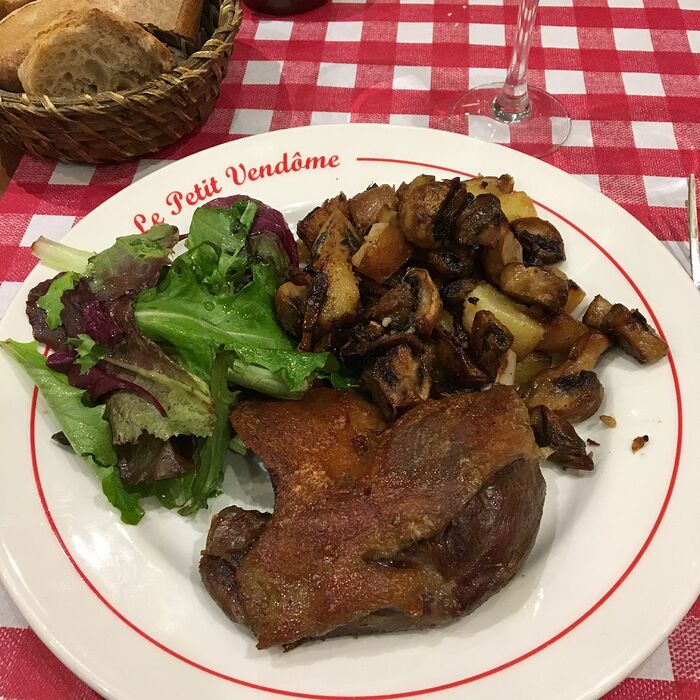 Also had a couple glasses of wine that were quite reasonably priced. A very enjoyable dinner.

Thanks for the report! I miss being in Paris.

In case any travelers (or locals) are reading this, I just read this on Dave Lebovitz’s blog - about a new place called Bouillon Pigalle (edge of the 18th at Pigalle metro) . It sounds like something interesting to check out. Anyone been? 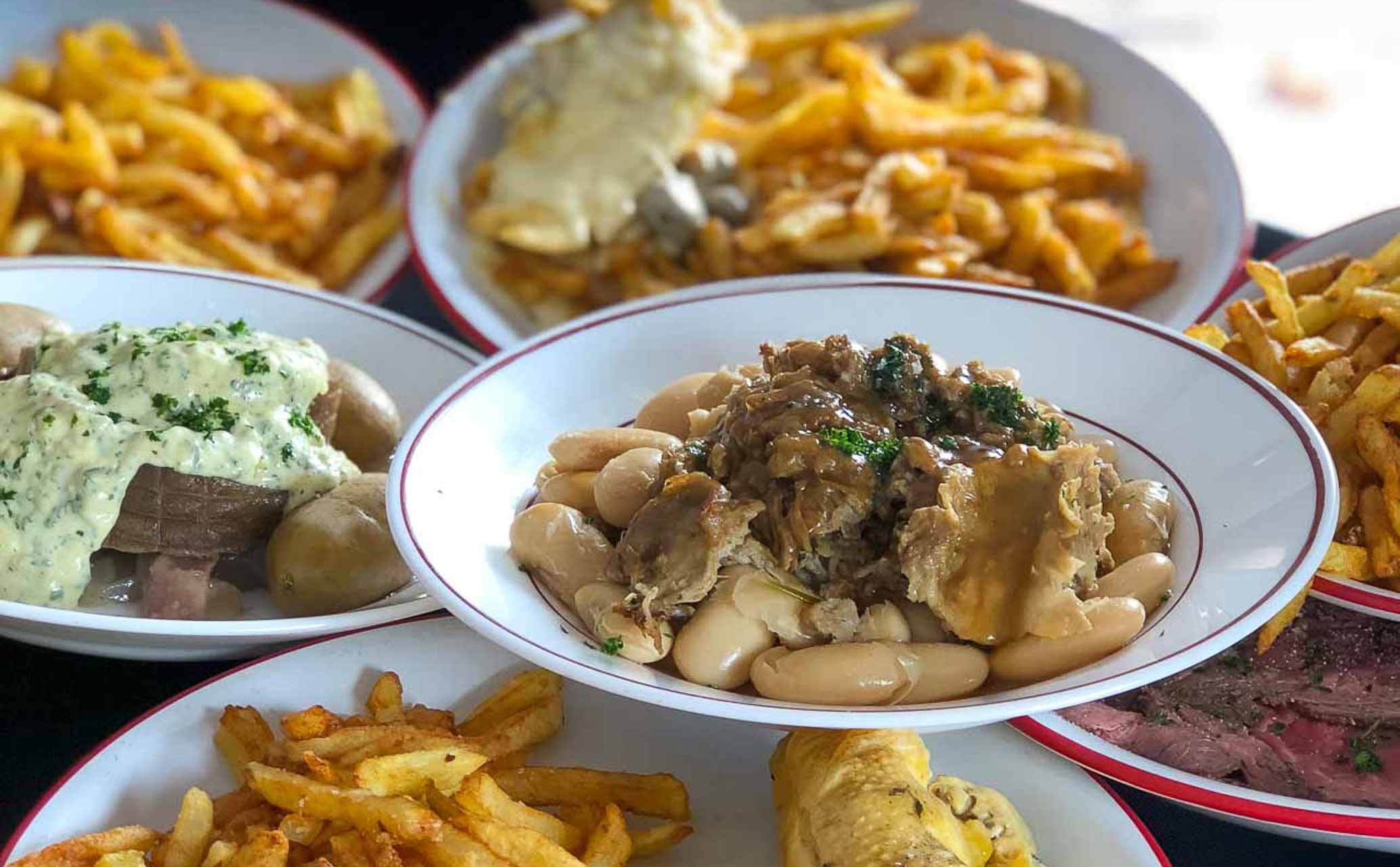 A bustling bistro in Paris that serves fresh, housemade food at astonishing prices.

Hugo & Co. is now on my list of places to try. And your meal at Le Petit Vendôme looks great, too!

about a new place called Bouillon Pigalle (edge of the 18th at Pigalle metro) . It sounds like something interesting to check out. Anyone been?

I read some other reviews saying it is okay for the price, but not exciting when you have so many good places in Paris. A few weeks ago, I have tried to convince husband to go when we were a bit late for dinner, he didn’t want to after reading the online menu. Quite a lot of stew food for warmer days, also some dishes we were cooking at home already, don’t feel like eating the same dishes when going out.

@Mr_Happy
Which was your best meal, if you have to choose one or two?

I think I probably should have gotten it rare due to the lack of marbling, but it was fairly tender anyway.

Marbling, not the French style. Yes, we like it rare here.
“Steak Revolution” on Netflix explained why.

One of the chef’s signature dishes is Ossau-Iraty cheese with a sweet topping so I ordered this. 6 generous rectangles of Ossau-Iraty topped with cherry jam and dusted with a bit of smoky paprika.

The concept of Hugo et Co. is a restaurant you go when you have a bigger group and want to share food together.

@Mr_Happy
Which was your best meal, if you have to choose one or two?

I would probably say Montée and L’Arpège. In terms of price-performance ratio, lunch at Montée. I didn’t have a bad meal this trip though.

Great report! It gives me motivation to finish a half completed report of my own from last winter. Hope we can visit Paris one of these days.