The highly hyped Ramen Nagi from Fukuoka opened their first branch in the US this week in Palo Alto. It is said in press articles that they won Tokyo ramen of the year in 2013. We had lunch there today.

We arrived at 11:45am. The line was about 20-30 people deep. Since we didn’t have alternative options lined up, we ended up waiting for about 45 minutes. The restaurant is still in soft opening mode today so they offer ramen only but no other cooked dishes. Those would have to wait until presumably the grand opening next week.

There are 5 ramen available today- the Original King (tonkotsu), the spicy Red King, the squid ink Black King, the vegetarian Green King, and the other vegetarian Limited King. We have the first 3 non-vegetarian bowls. 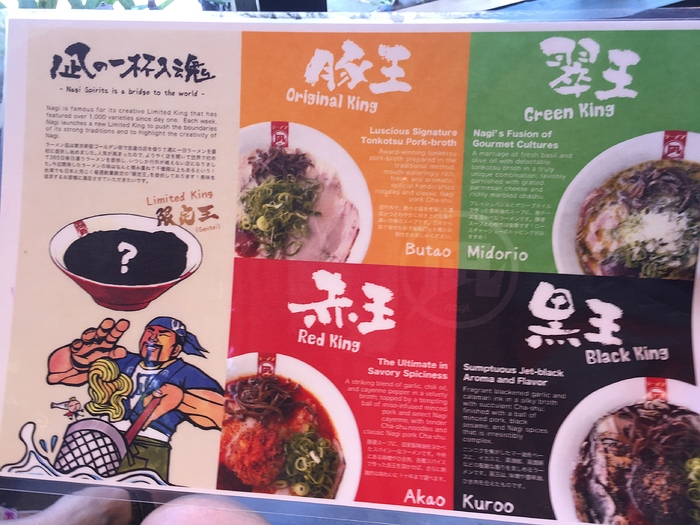 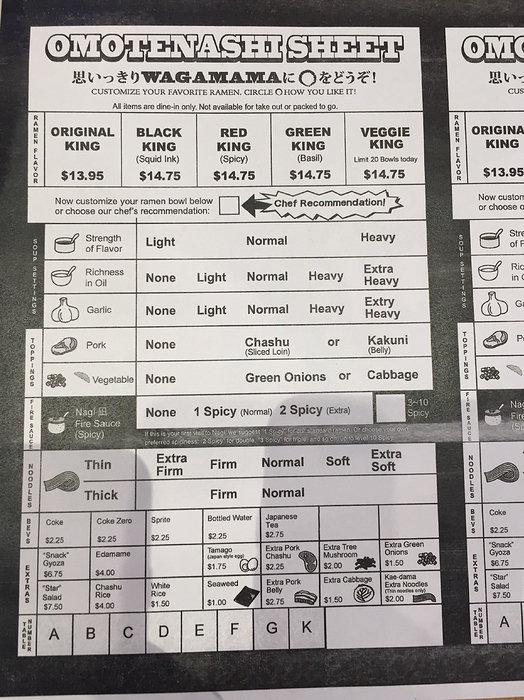 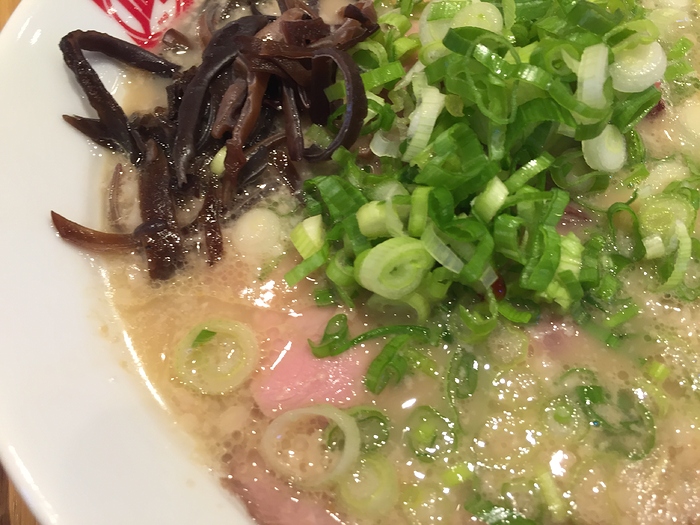 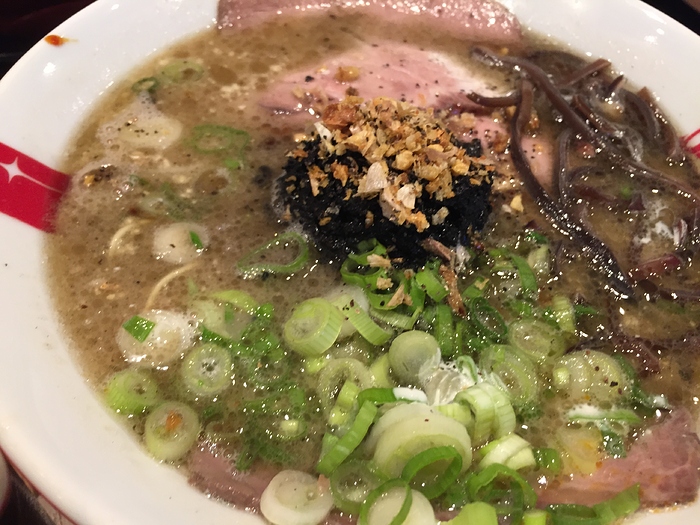 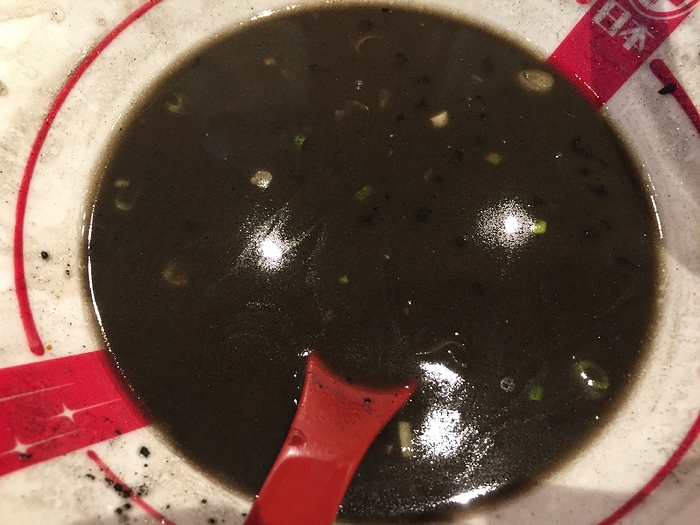 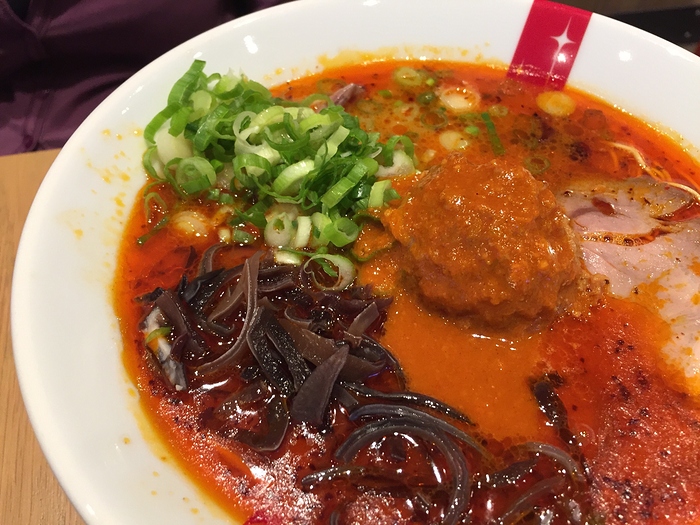 The tonkotsu base is slow simmered for hours with chunks of fat floating on top. The Original is a decent bowl of tonkotsu. Good for Palo Alto proper since its not a ramen town, though there are others comparable in the Peninsula and in the South Bay. Broth is on the salty side. The Red, with a miso broth, has a dollop of pungent chili , while the Black has a dollop of squid ink garlic. The Red is alright- not a big fan of the type of chili used. The Black is the easy standout of the three for me. The squid ink adds a mild sweetness to the broth while the chunks of black squid link infused minced pork and garlic add a savory dimension. All three share slices of tender pork. Broth could be quite a bit hotter.

We got the thin noodles, cooked firm, while keeping all 3 bowls un-customized. In retrospect, we probably should have gotten the thick ones. The thin ones are thinner than typical ramen and slightly thicker than somen. The thick ones are thicker, closer to udon. Get the extra firm, as ours, ordered firm, is already past al dente. 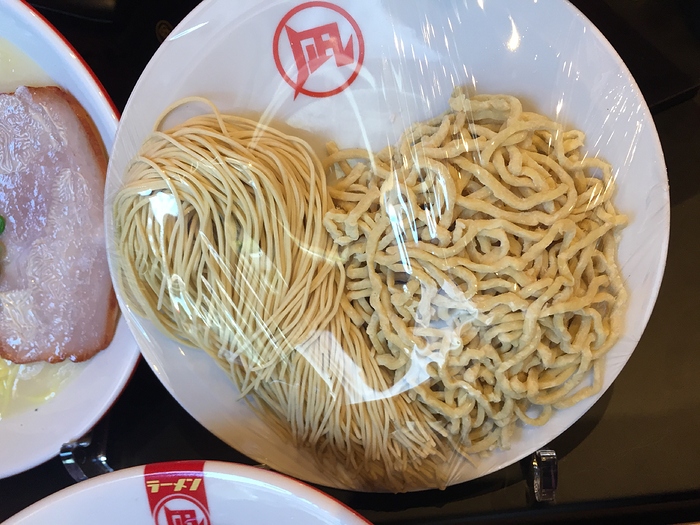 Condiments available on the table: 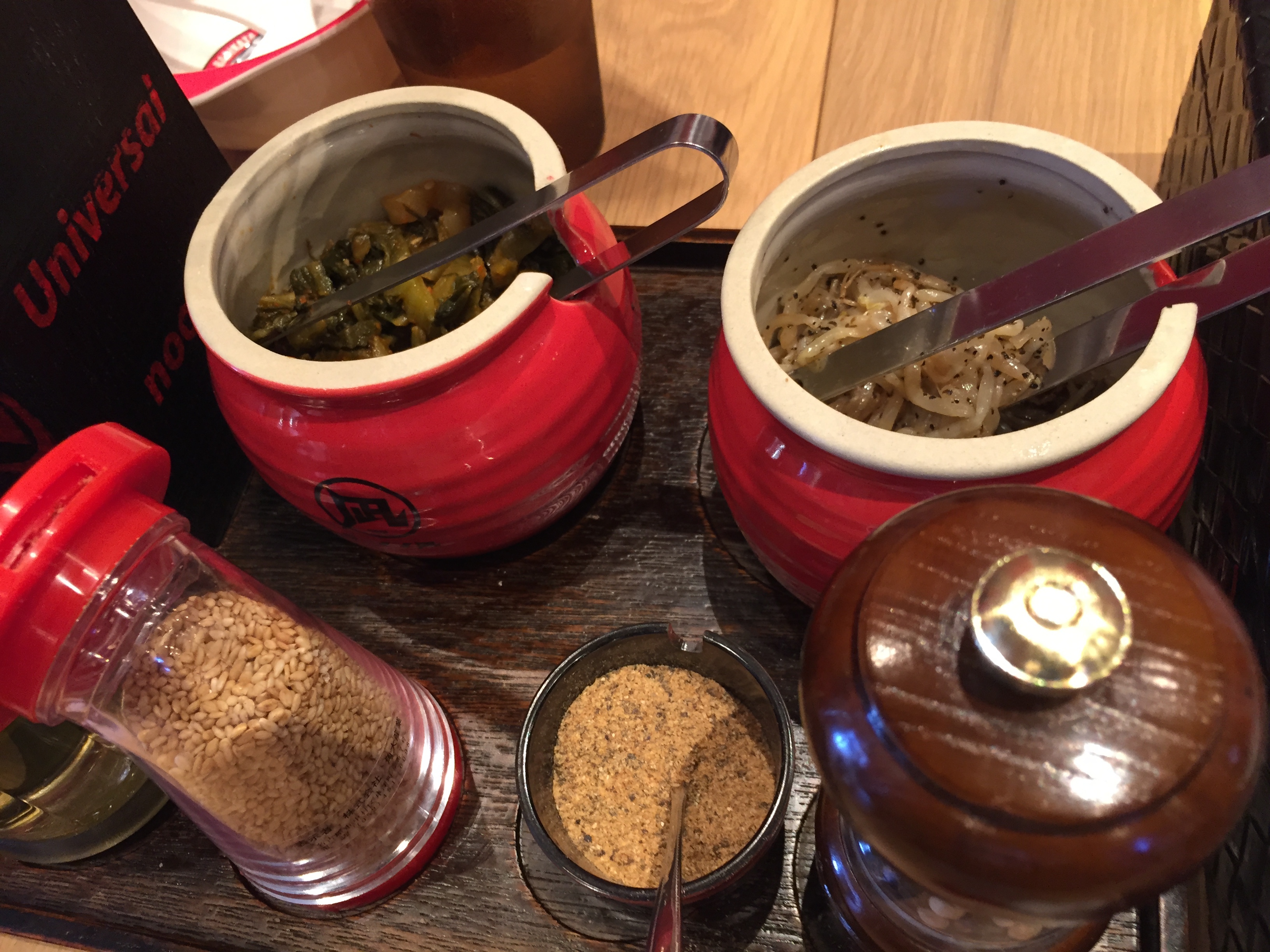 The founder of the chain is in the kitchen. 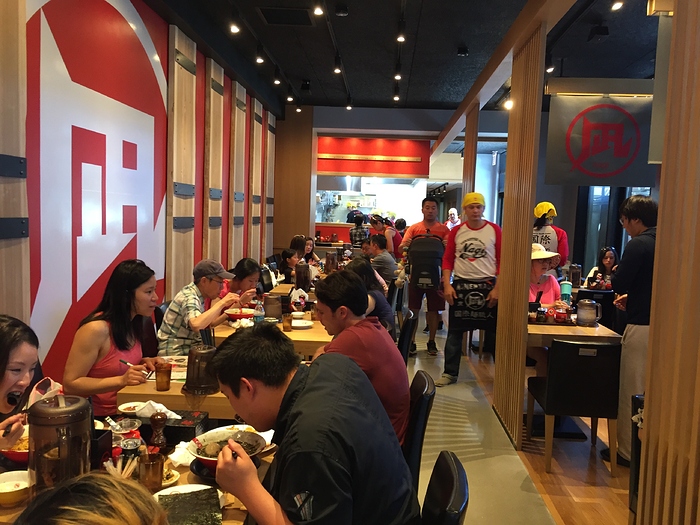 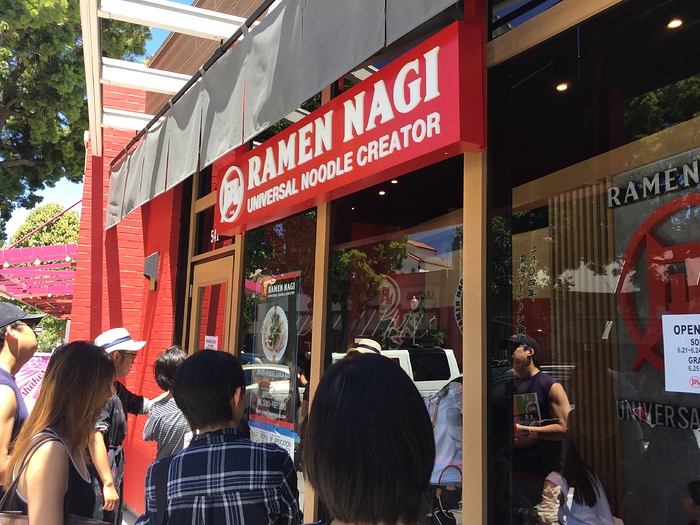 Is this Palo Alto?! The restaurant was full of Asians.

I don’t understand the noodles, did they arrived in a plate and you added in the bowl?

No egg in the ramen? We stay a lot in Palo Alto so I’m excited about this addition to a somewhat dismal dining scene.

To the above poster, Palo Alto is very multicultural town. Stanford and tech companies pull from all over the world plus California is very diverse. Not surprised to see a ramen place in PA almost completely full with Asian customers.

The noodles arrived already in the bowl. So I had no control of the firmness.

No egg in the ramen? We stay a lot in Palo Alto so I’m excited about this addition to a somewhat dismal dining scene.

Somewhere in the press I read about their eggs that are marinated for hours. I checked the box for chef’s recommendation for all 3 boxes rather than customizing the bowls (and yet they still asked me about firmness and noodle width). No eggs came with the bowl. Now that I read the order sheet/ picture menu again, no egg is mentioned on either. Anyone eating there next should ask them about that.

The southern edge Peninsula or PA itself may not be a hotbed for Japanese/ Korean/ Chinese like San Mateo or Silicon Valley. But its only a 10-15 minute drive from Mountain View and Cupertino, after all, where there are a lot of workers who came from East Asia live and work. 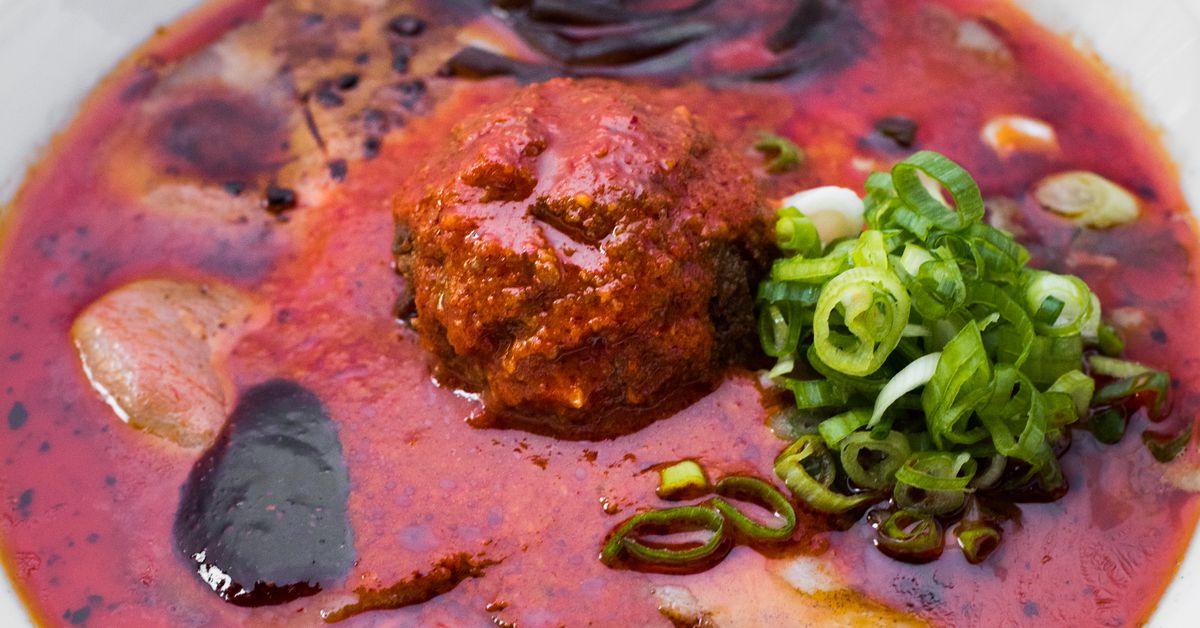 I don’t understand why customize-able is sought after in restaurants. There should be a balance in flavors in every dish. Someone who’s cooking a $15 bowl of noodle should have a viewpoint on what ingredient combinations produce the best flavors. Now, customizing cheaper fastfood when the kitchen is not particular adept is another issue altogether.

Not everyone is going to perceive flavors the same. I find my palate dull compared, and usually need/want more salt, etc. Spice especially, is an area where personal preference comes into play.

Also, I think the Japanese view of customer service takes the customer’s preferences pretty seriously and doesn’t discriminate against what the customer wants.

Is there a veggie version of the Green King? The description looks like it’s got tonkatsu (pork) broth with stuff added, and the menu looks like there’s a limit of 20 bowls of veggie soup for the day, which since I tend to eat late means it’d be a gamble whether to go there or not.

I don’t understand why customize-able is sought after in restaurants. There should be a balance in flavors in every dish. Someone who’s cooking a $15 bowl of noodle should have a viewpoint on what ingredient combinations produce the best flavors. Now, customizing cheaper fastfood when the kitchen is not particular adept is another issue altogether.

Fair point. I think what I am saying is that I was somewhat perplexed that they still asked me to pick noodle properties after ticking the box ‘chef’s recommendations’.

Separately, I forgot to mention that the portion was not that big. One bowl was not anywhere close to enough for me.

On the edge of palo alto, I like Dohatsuten, and recently opened northern chinese Chang’An ( a very different bowl of noodles ). Comparison?

We don’t eat in Palo Alto much these days. Did have a burger at The Creamery the other night. Due to the traffic, we have to avoid the freeway around dinner time, which often puts us in Menlo Park or Redwood City.

Haven’t been to the new place, but I really like Dohatsuten. Under its previous management, it was the first place where I really got the obsession about ramen, plus it’s usually possible to get a table, unlike Shalala and YuGen in downtown Mountain View, which are also excellent but crowded (or Ryowa, which is good and has been around forever, but is set up for parties of one or two; it’s not somewhere you can go with a group.) Dohatsuten’s still very good.

The Palo Alto place I went to the other day was Taste Szechuan. I’d seen it on a Sunday, and when I came back a couple of days later, was surprised to find the street closed and the entire block with construction fences and construction equipment filling the streets behind them, but the sidewalks and businesses were still open. It was pretty good - the interesting surprise was the Chongqing-style noodle dish, with the ma la spicy and Szechuan peppercorn flavors in something veggie.

I can walk to Chang’An, but the only time I’ve eaten there was the middle of a midweek afternoon; it consistently had a line out the door at lunch and dinner time for months after it opened. Not an extensive menu, but a couple of interesting veggie dishes. I should see if it’s slowed down any and I can get a seat. (I really liked the noodles at Kumino, the previous business in that spot.)

Need to give Dohatsuten a try at some point. You mentioned it here before, and I am curious to know who’s better too.

There’s always value in cheaper food and no lines, and if the food measures up, Dohatsuten is a good option.

It’s odd, their Japanese shops are most famous for niboshi (Dried fish) based soups, and I think they started in Tokyo, not Fukuoka. But sure enough their website does seem to show that their overseas shops serve the menu as described in this thread. Palo Alto shop is not mentioned as of today.

I tend to be afraid of dried seafood- it’s more likely than not I’ll find it unpalatable, but the really strong niboshi that they serve at their “Golden Gai” location in Shinjuku was super satisfying.

Not sure why we need yet another tonkotsu-based shop here in the bay. But I guess we’re not yet saturated.

I think you are right. I went to their Japanese web page and it says, if I understand it correctly, that they started in Shinjuku in Tokyo. When I originally wrote it I remember reading pieces on e.g. Mercury News saying they started in Fukuoka. But I will stick with their own web page, unless there is some side story we don’t know about. The only presence nowadays they have in Fukuoka is at the Fukuoka airport.

Not sure why we need yet another tonkotsu-based shop here in the bay. But I guess we’re not yet saturated.

We don’t need another in the Bay, but we kinda do in Palo Alto since I am not aware of any ramen places other than Dohatsuten. @bbulkow I finally went to Dohatsuten a few days ago, and I will get to a more detailed report later. But Nagi is noticeably better. Dohatsuten’s tonkotsu broth was a bit watery and the meat was a step down as well.

But yes, @twocents I think if we get more ramen variety other than tonkotsu, it’ll be better. Give us some dried seafood types like in their logo: 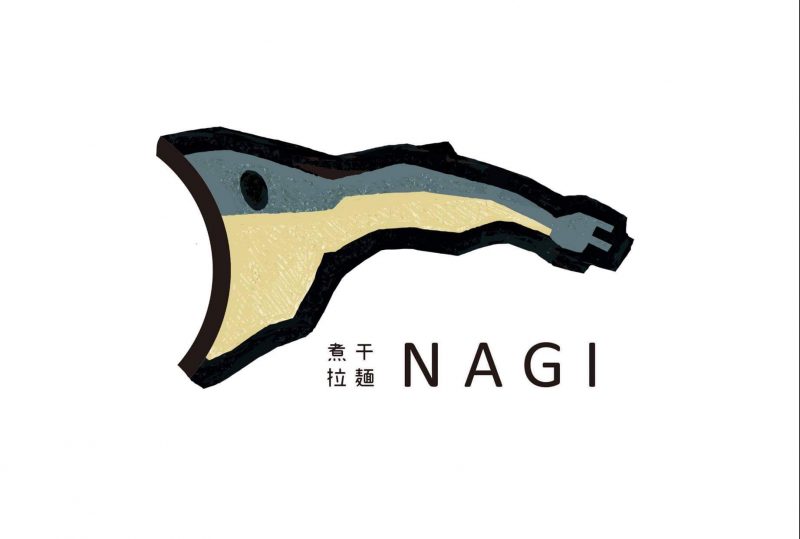 They now have a branch at Valley Fair in San Jose. Hopefully that’d mean it will pull some of the crowds away from their original store so I can actually eat there.

I only tried to go back once a month or two after my first visit. And the line was an hour long so I gave up. Any intel if its any better now?

A post was merged into an existing topic: Greater MP / PA restaurant roulette: THE REST