Paella- help me out peeps!

So I bought me a shiny, new, paella pan on the weekend and want to break it in. I “seasoned/prepped” the pan as per manufacturer’s instructions but now need a decent seafood paella recipe and some tips.

I haven’t made paella in years and last time it was some sort of bastardized version.

I have mussels, crab and shrimp kicking around for it.

Tried and true: http://www.epicurious.com/recipes/food/views/birthday-party-paella-101008
The only change I make is I don’t use spicy sausage.
Have fun with the new pan!

I brown the meats first then finish cooking in the rice with the seafood.
I also have found Vigo Yellow Rice with saffron to be the best rice for paella. The thing I love about it is you really can’t go too wrong, season to your personal tastes and just cook how you like it. I use salt, pepper, garlic (shit ton, just to give you a rough estimate how much I use), saffron (little extra), bay leaves, parsley, dry white wine or vermouth, chicken stock. Simmer away and continue to season to taste!! Love paella !! (although not while doing low carb

Are you going to make the crust crispy? That would require a special ring.

I make paella (more often bastardized versions for the true purists) often - I just made it this weekend for my mother’s 75 birthday party.

There are so many recipes out there - what exactly are you looking for? Are you looking to do it in an oven (versus over a burner or grill/coals/wood)? Are those the only things you want to add (mussels, crab, shrimp)?

tuck in seafood and add stock to be at least 2x the amount of rice (e.g. 2 cups of rice 4 cups of stock - you may need more depending on evaporation/etc)

That’s it in general. Sometimes I think the mussels get too overcooked - so I have at times added them 1/2 way through oven time - but if I’m using clams then I like adding them where I did above. If you were using canned or cooked crab I would add that towards the end too.

This method doesn’t always create a cook bottom crust if you’re into that - but I have only had success with that doing it outside over a fire . . .

If you need a step by step serious eats does a great job and their recipes are tested well. The right type of rice is critical 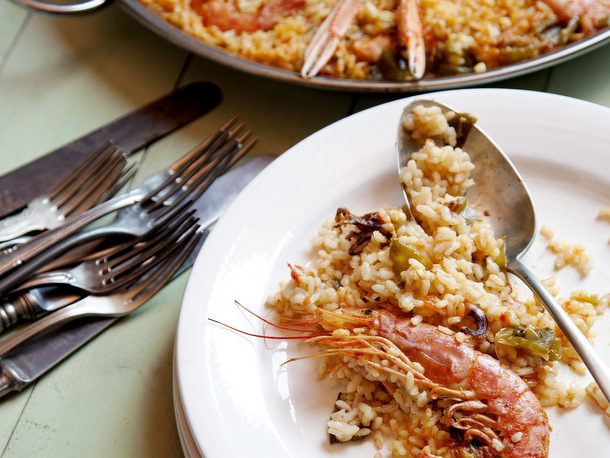 Jeff Koehler wrote the cookbook on paella. Literally. So I was keen to try out the paella recipes in his new cookbook, Spain. His shellfish paella is based on a recipe from his mother-in-law, who has been making this particular pan of rice every...

This is one had looked at and was leaning towards.

Cooking the clams and mussels in advance would seem to make for tough/rubbery reheated shellfish. And what’s with the “cross wooden spoons and lay a paper towel over”?

There is an excellent breakdown of the ins and outs of what makes a good paella at http://www.nakedwhiz.com/paella/paella.htm I don’t know that it has to be a ceramic cooker, but much of the basic history and construction advice is sound.

I’d agree with others that the right rice is essential; I’ve had terrific results that don’t split with Valencian La Bomba, personally.

And as for method, I have worked off of Alton Brown’s description on a grill top, which is as close as it gets in an American home to the kind of wood fires that would have been traditional to sear -> deglaze -> slowly cook to perfection. http://www.foodnetwork.com/recipes/alton-brown/paella-recipe.html

Wow ! This breakdown is fantastic(Nakedwhiz)! Thanks for sharing it! Answers a lot of my loose ends.