Has anyone tried this recipe using much less butter? I’m wondering how it might turn out. I don’t like the idea of 7tbsp of butter for 8 shallots and then I eat celery the rest of the week. I was thinking of 3 tbsp butter.

Tagging @mariacarmen because I know she has tried them. Not sure of the butter quantities she used.

I’d try it with the lower amount - it’s all low risk / low cost ingredients and I’m sure will be delicious anyway!

(I do miso butter mushrooms quite often, and that’s tasty across different proportions of butter).

I was thinking of adding more veg in addition to decreasing the butter. 3tbsp of butter still seems pretty luxurious to me for a veg side dish…

For a pound of mushrooms, I use a tbsp or two of butter depending on my mood, and a tsp or a bit more of miso - to taste (I’m careful because of the salt and mushrooms shrink).

I’m going to cut down on the miso because I have dark yellow, not white. And lots of the commenters suggested less water as well. It’s on the menu tonight, so we’ll see!

Look forward to your review!

Well, here is a review. I cut down the butter to about 3tbps, and cut down the miso to about 3.5 tbsp instead of 6. I was concerned it would be oversalty otherwise. Rather than modify the recipe more, I added the full quart of water. Once the lid was off, I threw in some green beans to make it a heartier veg side. I think there was enough butter. I had to cook w/o the lid for about 65 minutes for the tops of the veg to get a little color, and for the liquid to evaporate some. Overall, the dish was tasty but not that special. It bore a strong resemblance to french onion soup quite honestly. The miso flavor was subtle. I was hoping for more. 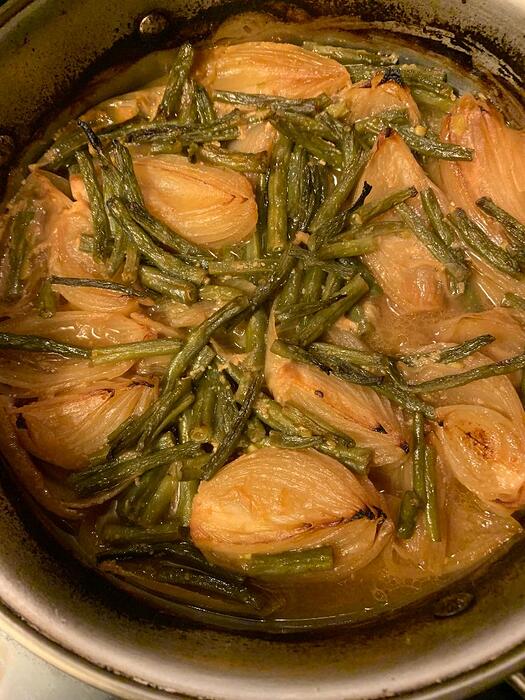 I wonder whether Ottolenghi also tried the reasonable-amounts version first, and was also left hoping for more - and so he added more.

Making something that really reminds you of French onion soup, but with no beef stock and with the onions less browned, and finding it less than inspiring, may just indicate that this type of recipe needs a lot of something.

When I said I was hoping for more, it wasn’t more butter. I love miso, and I found the taste of it to be hard to find in this recipe. Ottolenghi also has a reputation at this point for being a bit of an alchemist in terms of turning ordinary ingredients into magic. So when this basically just tasted like the sum of its parts (ish) and method, and no more than that, I guess I was disappointed that he is just a mere mortal after all.

I didn’t mean butter necessarily, just the idea that it seems to need something, because you’re not that thrilled with it.

But you can’t exactly blame him for the result - “Let’s try this recipe but take most of the yummy stuff out, and see if we like it” isn’t really fair. I certainly wouldn’t call for all that butter in a recipe, unless I had tried it with less first and didn’t like it.

If he’s at fault, maybe it’s because he should have called it “Butter And Salt, With Vegetable Garnish”

I generally agree with you that its not ideal to rate a recipe that you haven’t stuck to. Nevertheless, with the changes I made, it should have been relatively easy to see what the original recipe would have been like. And I just wasn’t terribly impressed is all. It was good enough.

Good to hear your thorough and critical review @Sasha. Sounds like it may have been just a meh recipe; wonder how it would work with sweet or red onions - a reduction of butter shouldn’t have made a huge difference, IME…
Find myself wondering if thyme would go with miso? May have to experiment…

Lambchop, it wasn’t bad by any means. And it’s an easier way to make a french onion soup than the traditional way

You just have to be comfortable regularly opening a 500 degree oven and handling the pot in order to baste. So possibly a little health-hazardous!

Good to know, I may make a soup, may even adapt it to stovetop @Sasha.