Hoodlines has an interesting article on Osha Thai’s history and the current conversion of their 2nd St store to something called “Lao Table.” Lao food is something we need more of, and I wish this place had been around 25 years ago when I worked at 2nd and Folsom. 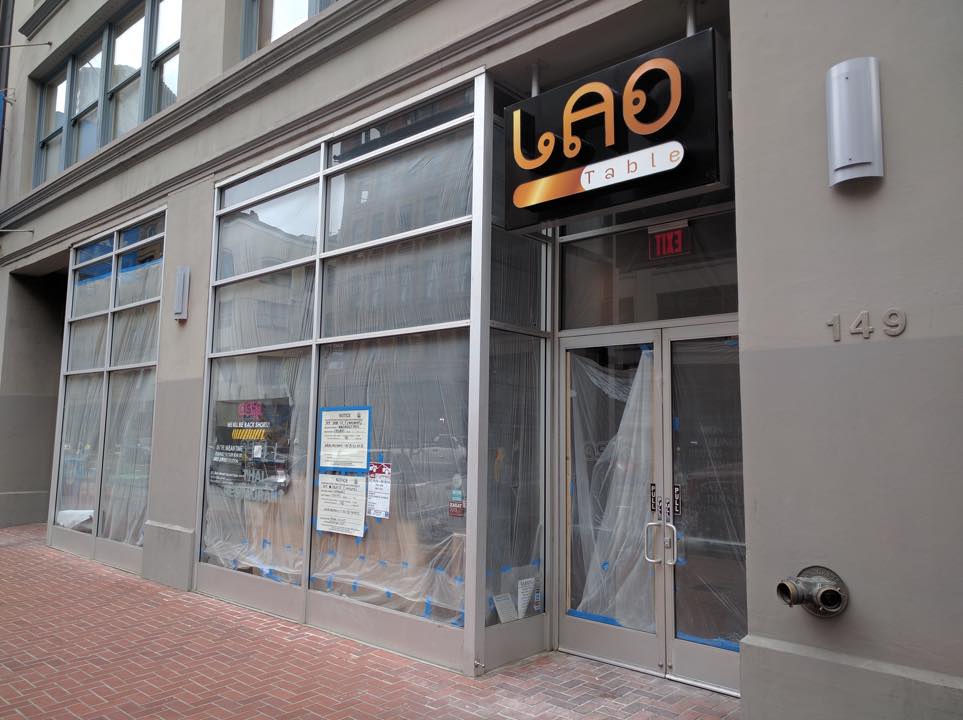 This Wikipedia entry is useful in understanding Lao food and its relationship with Thai food, in particular so-called Isaan Thai food: https://en.m.wikipedia.org/wiki/Lao_cuisine

It’s a sticky issue, one might say. Vinya Sysamouth, co-founder and director of the Center for Lao Studies and a chef himself, held a series of excellent Lao cuisine pop-up mealss on Thursdays at Turtle Tower last year as “Lanxang Kingdom” and is a leading booster for Lao food and pride in its heritage. He likes to shame Lao chefs like James Syhabout for passing their food off as Thai for greater acceptance.

Lalita Souksamlane deserves kudos for “outing” Lao cuisine and framing it in the way she apparently plans to. I’m not usually a fan of “elevating” ethnic cuisines that already have a strong identity, but Lao food deserves its Cinderella moment (and may the clock never strike midnight!)

Incidentally, Tamarind Hall in North Beach has some Lao/Isan dishes.

Speaking of Tamarind Hall, Peter Lawrence Kane has a writeup

Kane seems oblivious to Noodle Bar and Grill on Broadway for decent casual Thai fare in North Beach (though I haven’t been since their chef went to Kyu3). And I don’t know what it is with Thai restaurant names and failed puns; “Tamarind Hall” is particularly opaque, even to an ex-New Yorker like me.

And there’s nothing “2nd Wave” about the food at Saap Ver. Only “2nd Rate.”

It seems a little odd if Souksamlane thinks less coconut milk and more bamboo shoots are the main things distinguishing Lao from Thai food. But kudos to her for getting away from putting the “Thai” label on everything.

That was not a direct quote from Souksamlane, though the two ingredients my have been cited as notable examples of the differences between the two cuisines. Lao chefs (and northern Thai chefs as well) are quick to diss southern Thai chefs’ reliance on coconut, believing they do it to pander to sweet tooths (um, do you prefer sweet teeth, spellchecker?)

Has anyone been to Lao Table? We are going to Cirque du Soleil tomorrow night and looking for someplace to eat and it’s close by. Is it any good? Or should we go to Farmhouse kitchen Thai instead which is a bit further away but we love the sister restaurant (daughter Thai)

We were pretty shocked looking at the menu how expensive Lao Table is.

Presumably the other proteins in the meal - the satay and chicken wings at least - come in reasonably sized portions. So in addition to the whole fish you’re getting the equivalent of two or three other plates plus carbs and veggies. Still expensive at $70 but not so bad if it’s enough to feed 2-3 people. (Why what appears to be basically a set menu is on the “appetizer” section of the menu, I don’t know. Maybe because all the accompaniments are appetizers?) But yeah, I can see how it would still be jarring if the tilapia you’re being served is the usual cheapo farmed fish.

The funny thing is that this kind of sticker shock is exactly how we felt about Farmhouse Thai on our visit there last week (as it happens, Farmhouse was serving a huge “Lao table” feast – for $85pp. We opted for the regular menu). I think our meals at Esan Classic have been better value for money.

I see it as a deterrnined and righteous attempt to present an elevated platform for a cuisine many think should always be “cheap” and many chefs have appropriated an re-branded as “Thai”. Lalita Souksamlane’s whole tilapia dish is not out of line with Brandon Jiu’s “large format” dishes (meant to be shared). If Mister Jiu’s can do it, why not Lao Table?

Lao Table’s $28.95 Khao Poon is still on my noodle bucket list (it features Alaskan KIng Crab in place of the usual chicken). A $17.95 pho on the menu is not that far from what a trendy ramen-ya will ding you for a bowl of noodles nowadays.

I strongly disagree with the premise that Asian cuisine must always be “cheap”. BUT this place goes overboard. For comparison the Lao sausage appetizer at Lao Table is $14.95. At Daughter Thai, a restaurant that is definitely not “cheap” but someplace we regularly eat because of the high quality of the food and friendly service, the Thai Sausage, which is outrageously delicious, is $9.75. Perhaps the version at Lao Table deserves the higher price tag but I am skeptical. Not everyone is in a financial place where they can regularly eat $70 tilapia. A few days ago their menu listed a Tom Yum soup for $50, although that is no longer on the menu.

Understood the fish dish has other apps as well. Though if they are going to charge $70, I think they should use a more expensive fish than tilapia. At least Brandon Jew uses black cod.

I would avoid Farmhouse Thai (even if you could find parking…). Everything is godawful sugary.

If anyone in the east bay is hankering for ‘non elevated’ Lao , and doesn’t mind the setting, check out the snack bar at Castro Village Bowl in Castro Valley. (yes, as in bowling alley; not a trendy ‘ethnic-inspired food but dumped into a bowl’ place)

A nice Lao family is the concessionaire; 75% of what they sell is the typical chicken strips 'n fries that the bowling patrons munch on, but they also have a small Lao (plus Thai, in a nod to the thread comments above…) menu. Note: they typically only open up the Lao menu in the early evening…when the family’s mama shows up ready to cook up a storm

If you’re not bowling, there are still options for where you can sit down & eat this delicious food : a couple of small tables in front of the snack bar counter, or, take your food into the Brass Boar Lounge, the alley’s attached dive bar. There’s a handful of tables there. They never say anything to us about bringing in all this food, so long as we buy a nice pint of beer or two.

Epic find! Never even heard of the place. Have to go there some time!

Is the Lao mama there every evening or only some evenings? Do you have a copy of the Lao menu? Thinking maybe getting some takeouts next time passing by.