This is a picture of my grandmother’s kitchen, taken right after she died, exactly as she had left it (except for family that was staying in the house for the funeral). 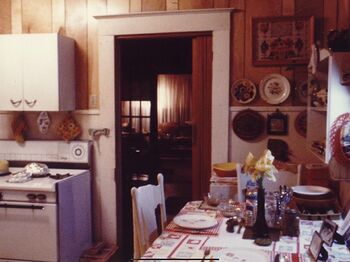 No, the practice wasn’t installing 70s wood paneling on the walls - I was horrified- the last time I’d seen the kitchen, it was papered with very cute, old-fashioned wallpaper. But look at the white cloth folded over one of the kitchen chairs (which I now have in my own kitchen, stripped of the paint and recaned). If food was left on the table between meals (not potato salad or something that would spoil, but things like condiments or biscuits or maybe ham or sliced onion) that white cloth would be unfurled and would cover everything on the table— plates and food — kind of like covering a body with a sheet

. My grandmother was born in the 19th century; this must have been a practice she grew up with, and honestly I never thought to ask why it was done (I’m guessing to maybe keep flies off the food?). Has anyone ever encountered this practice or does anyone know the history of the custom?

(I’m guessing to maybe keep flies off the food?)

I am not a cultural insider here, but this would be my guess: your grandmother grew up in an era before widespread refrigeration. Food would be kept on the table and covered with a cloth until the next meal to keep off flies as you said, and to prevent anything falling into the dishes. Just a practical solution if there were not individual covers for the dishes?

The dishes were covered by those little plastic shower cap contraptions. When they moved into town, they had an icebox. On the farm, they had a springhouse.

Then I would love to learn the answer too …

My southern mother left the remains of a roast on top of the refrigerator. O, the sandwiches we had!

OT, but what a lovely, soulful kitchen. I may be odd-man out, but I seriously dislike today’s popular open concept kitchen. Your grandmother’s kitchen seems full of warmth and good vibes. I would be very happy eating at that table.

On the farm, they had a springhouse.

Would you please elaborate on this? I’m familiar with screenhouses built over creeks to keep fowl, game and smoked meats fresh(er) and long(er). Similar, perhaps?

I’ll add my “cloth” custom. My great-grandmother apparently kept a daybed/fainting couch in a sunny alcove near her cookstove. My mom said her grandma always wore a long apron, which she would flip up to cover herself when she got a nap break from the endless drudgery.

I have other photos. She was quite an educated woman and a fine teacher. 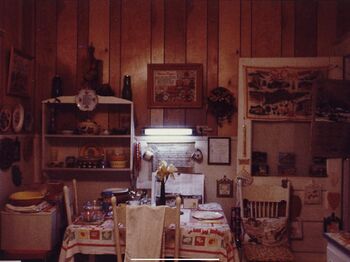 This kitchen was open 24/7 for all who would come in the back door! Coffee immediately brewed and served. Not open concept, which I don’t like either. What amazes me is she had so much stuff and she kept the whole house so neat. Nothing out of place.

I can only imagine the spring house based on the ones I’ve seen here. There was a creek running through their property. The springhouse straddled the creek, with troughs that sat in the running water. My mother said they’d put the milk cans in those troughs to keep the milk cold. My grandmother’s cloth covered the food, not the cook.

. Although as a child when we’d travel to visit, after “dinner” — i.e. lunch— we’d all retreat to our bedrooms with shades drawn and fans on to nap. Businesses also closed for a couple of hours during the hottest par of the afternoon.

There was a lot of tasty stuff under that cloth. None of us died from it!

Well, there was a drippings can by the stove for the bacon grease. I had a lot of fresh-caught fish, including catfish (always pan fried in cornmeal) but I think my grandmother had graduated to Wesson oil. I suspect what was hiding under that table covering was also the leftover breakfast sausages my grandfather had someone make to his speciations: smoked and dried. Like andouille, but without garlic. I finally found a purveyor who made something similar. I was in heaven!

In my youth I Ied a high traverse across a remote range of mountains. I went in early and salted some streams with 6-packs of beer. It wasn’t enough to earn me a sedan chair finish, but it was appreciated…

Love this thread . Let’s say you have no refrigeration. For the rest of eternity. How do you make it work. ?

I’ve never actually been inside one. When I was a pre-teen, we lived in a completely suburban development very close to the city that had a stream by the corner with a stream house built in/over it. Over the decades, whenever I’d drive by, I would notice the advancing collapse of the little structure. The roof is gone now; I assume the large estate house on whose property the springhouse probably rests has abandoned its upkeep. I can barely spot the stone walls through the brush on Street View. Ditto 2 more that were near where we moved; both have disappeared. But I do see one still when I take the back route to get to a Wegmans. Here it is on Google Street View. Ironically, all these spring houses are extremely close to busy traffic corridors, and within 20 minutes of downtown. The topography is veined with streams/falls so it’s not surprising to still see evidence of them. 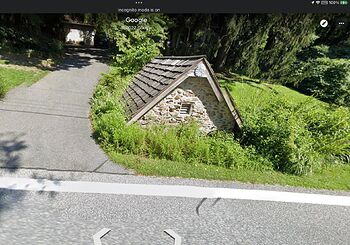 My grandmother was born in the 19th century; this must have been a practice she grew up with,

How interesting! Not from a Southern family, but my grandmother was born in the early 20th century and came to the US as a child. My guess is that the draped tablecloth might have been what people did back in the day when it was more efficient than clearing the table.

I say this because my grandmother recalled that families would drape a tablecloth on top of their plates and any food on the table after Christmas Eve dinner. (A meatless, vigil meal was traditional in her Slovakian heritage.) After dinner, they left to attend Midnight Mass. They’d come home after Mass and have their first Christmas meal in the wee hours of the morning—featuring the ham that awaited them under that cloth.

Very interesting! So perhaps it isn’t a Southern custom after all. This grandmother (and grandfather) were Scots-Irish Protestants; that group had been in the South for generations, so that rules out recent immigration or religious custom as contribution factors - BUT - in the winter the rooms would have stayed very cool, particularly if people left the house. My grandmother’s house, like most in the town, was heated by gas-fed space heaters (yes, I know, dangerous and now illegal in most building codes). You lit them with a match and you did NOT leave them on at night, or if you left the house! (As a matter of fact, the young woman who bought the house after my grandmother’s death did just that - and a curtain blew into a heater. The house burned to the ground) So the temperature of the left-out food would be cooler than what we expect now. I also presume that food left out in the summer would be different that what was cooked in the winter. I recall summer cooking being different - at any rate it had to be completed by 10 am or so because the kitchen became too hot!

So the temperature of the left-out food would be cooler than what we expect now.

Sounds plausible to me. Coal stoves for heating were common when my grandmother was young and she often recalled how cold houses would get.

Feeding the family was also so
labor-intensive—preserving, cooking from scratch, baking, cleaning up—and she was clear that women did all that work. Anything that saved even a bit of that relentless labor would have been welcome.

My grandmother had a “fruit closet”in the dining room where she kept all of her jars of home-preserved stuff.

Which brings me to something else I just remembered. The town FREEZER LOCKER. For you youth out there, refrigerators didn’t have freezers at first. They had chillers, a box inside the refrigerator compartment that held ice cube trays, and not much else. They chilled the refrigerator cavity and froze ice cubes, but they weren’t cold enough to keep ice cream from melting, and didn’t have much room in them anyway. I remember my cousin often saying she had to go the freezer locker. The freezer locker was a space you’d rent in a commercial refrigeration building, kind of like a mailbox for frozen food! 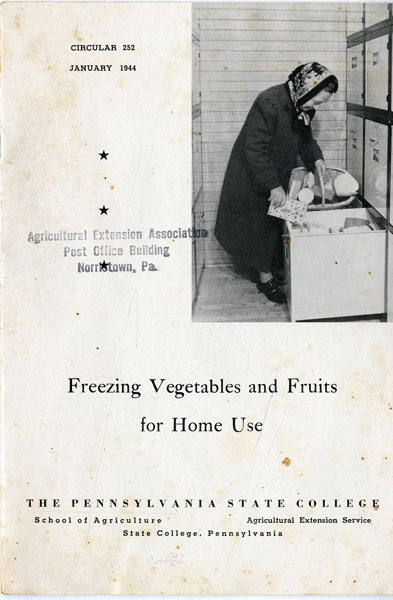 My grandmother didn’t use the freezer locker that I know of; they actually had a chest freezer in the storehouse (which was electrified) in the back yard.