Yes! And it probably is easier & thanks @Babette!

Followed your very good advice @Babette! You saved us countless time, and it was a still quite a task. DH says he never wants to see those berries again. They have a flavor unlike any berry I’ve ever tasted. I think they’re going to be delicious with a gorgeous jewel like color, and the right amount of sugar. They have a lot of very tiny seeds, even the finer chinois probably only got about 70%. So they have to go through cheesecloth now. Unless you have a better idea

Hopefully your entire kitchen isn’t purple after all that! If the seeds are small enough to pass through a fine chinois, I’d probably just live with them

If you want some clearer juice you could re-strain through the chinois but not push at all, just let it drip.

Thanks! Kitchen not purple, kept wiping it off. Also set up the chinois over a large wide pan that was sitting on a 3/4 sheet pan, with a chopping mat beneath.So pretty containable mess wise.

They would be lovely as a syrup - just a splash into all kinds of drinks (Prosecco, old fashioneds, G&Ts).

Shrub and reduced syrup could be used for cooking/finishing too - think balsamic vinegar and pomegranate molasses.

I’m still puzzling over what the berries taste like, other than tart and a little astringent. Never been this flummoxed over a fruit flavor like this. I don’t pick up any notes of citrus or anything else I can readily identify.

I tasted again this morning and very carefully too.

What I picked up today is sort of a musky cranberry flavor. Think they’re going to be good, but kind of intriguing. Am going to freeze most of the juice, leaving only enough for a batch of jam, as well as some juice to experiment with various pairings. Will see how it works with Chambord, as well as St Germaine. Don’t have any cassis or Grand Mariner. Any other ideas totally welcome as far as the flavor profile goes.

Ok, I made 7 small jars, (think they hold 4 ounces) and one larger pint from the Alaskan black currants. Kept the sugar low, so jam is pretty tart. Nice, intriguing flavor that I wouldn’t be able to identify. They’re also a dark jewel tone, when you spread your toast with them. Quite a lot of work, but I have 4 quarts of juice ready for other projects. The big jar is going to a great pastry chef in the Seattle area! 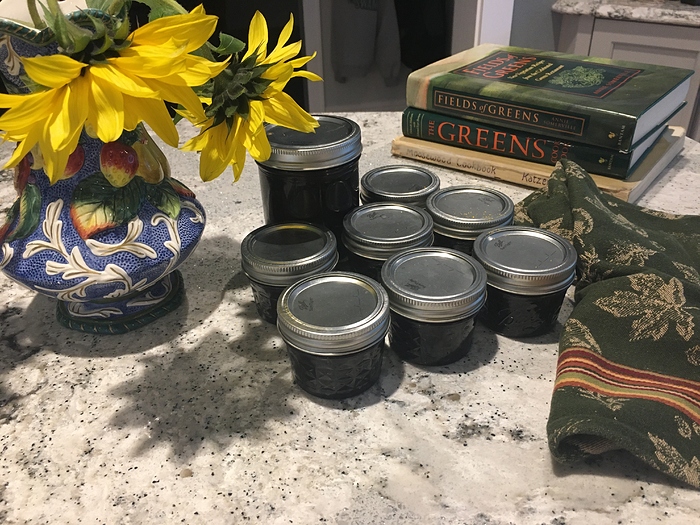 I was just sampling from the bottom part of the pan, so it’s always a harder, more sticky end result than the actual fruit in the jars. Opened a jar for breakfast on Sunday, and was more than pleased! it’s actually more like a jelly than a jam and the set was perfect as was the sugar level. The few remaining seeds are so tiny, so as to be almost completely unnoticeable.

It also led to a new kitchen toy, initiated by DH. Will post a pic on another thread.

Did you use pectin? If so, what kind? I’m trying to get my pepper jelly recipe right.

Yes, Sure Jell Light. It’s very consistent and I always get a good set. I sometimes use less than is called for if I want a softer set. I do cut the sugar quite a bit lower than it says, and typically add more fruit. I make some sauces to can like Asian plum sauces and chutneys where I just boil it down to the right consistency.