Others disagree. I can’t find a link to the original “Nasty Bits” article but I found this aboutsweetbreads. 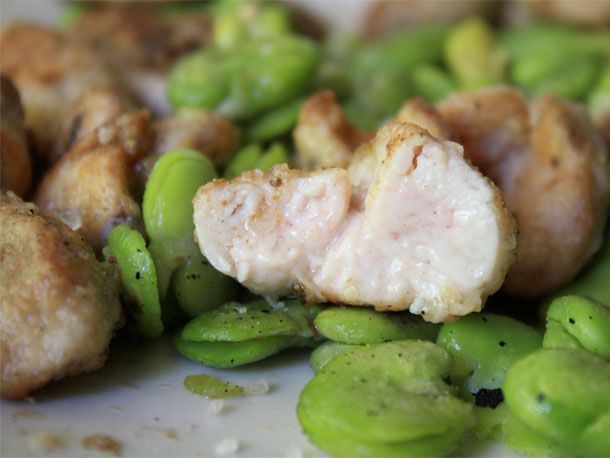 Sweetbreads, though mild in flavor, have an offal-reminiscent flavor somewhat akin to brain. People often describe the texture as "tender" and "creamy"; I would add "marginally juicy." Sweetbreads made from an animal's pancreas and thymus glands...

I just read your posted article.

Unfortunately, it does not say anything about the differences in the type of animal that is used in Oxtail.

In Spain, the bulls that are brought to the Bullrings, and are (unfortunately) killed by Matadors, & this is where the Spanish Rabo (tail) de Toro (bull) is from.

However, due to Covid and the humanitarian groups who are against bullfighting, cattle are used and marked accordingly as Rabo de Buey (beef cattle).

There is a distinct flavour difference and price difference.

None the less it is a scrumptuous dish … If you are ever in Jerez de La Frontera or The Capital of Madrid during the month of May … May is the “Corridas” = bull fighting season.

Thank you. My experience with oxtail is Carribean; I’m pretty sure it is random cows. I can’t believe they now sell for more than $8.00 USD per pound (453 grams according to Google) around here, even in "Asian " markets.

ETA, I like to keep the history and culture of bullfighting in mind, but not a fan. Not a fan of horse racing, or boxing either for what that’s worth!

Oxtsil, especially paired with shortribs, is one of our favorite dinner party dishes, recipe often requested. It is absolutely no longer a cheap cut. And quality or meatiness varies tremendously.

Here it is! I’ll leave it in Imperial measurements, but will happily convert if anyone needs

In large skillet saute bacon until crisp. Drain, crumble, and set aside.

Add onion to drippings in skillet saute 5 minutes. Remove and set aside.

If using tinned mushrooms, drain, reserving the liquid. (If using fresh, saute in a different skillet until they give up their liquid. Drain liquid into a measuring cup)

Combine mushroom liquid with wine to equal 3/4 cup. Add to drippings in skillet with salt and pepper. Bring to boil and remove from heat. Pour onions and mushrooms over liver in baking dish. Pour wine sauce over liver and add bacon on top. Bake 30 min at 325F

You can also substitute chicken livers, then serve over rice.

Hope it turns out well for you!

We are not fans of bull fighting at all nor boxing – however, in May, this is when one can purchase or dine out on fresh “rabo de toro” verses frozen …

Oxtail from cattle is, however, alot cheaper. Approx. less than 8 € a kilo.

Have a nice day ahead.

Thanks Sunshine. I can interpret most of that into Brit Speak with no problem. And, no, I won’t be using tinned mushrooms. One of our hotel chains used to use them on the breakfast buffet - once tried, never repeated.

Yes, oxtail in the US is now just tails from whatever bovine happens to be at hand…which makes the high prices even more baffling.

My favorite off cut (since it’s not really offal) is beef cheeks…I braise them told they are melting tender. The flavor is sublime, and theres so much collagen that the sauce becomes a silky, unctuous gravy with no effort at all.

Beef cheeks are fab. As are pigs cheeks.

Our (Indian muslim) neighbors growing up made (goat) brain cooked in green cilantro chutney and ghee every Sunday for breakfast, eaten with soft, fresh bread.

The recipe was shared at some point, and it became an occasional treat at our house, but always at dinnertime because it’s a very heavy dish for the morning.

We ate it tonight, much lighter on the ghee than our beloved late neighbor would deem appropriate, but still delicious. 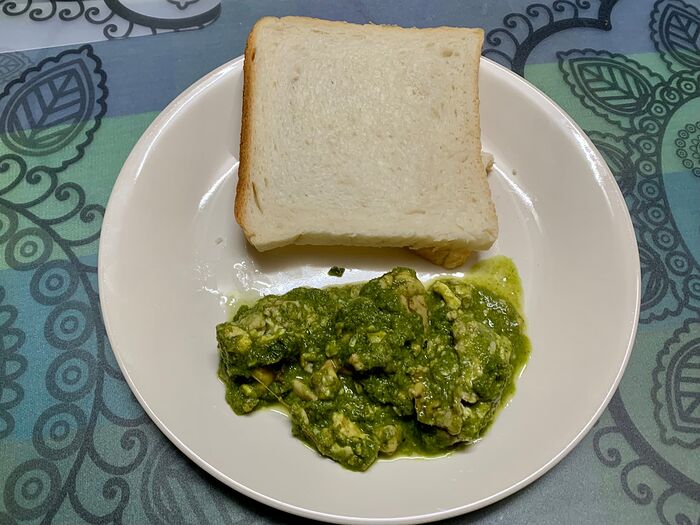 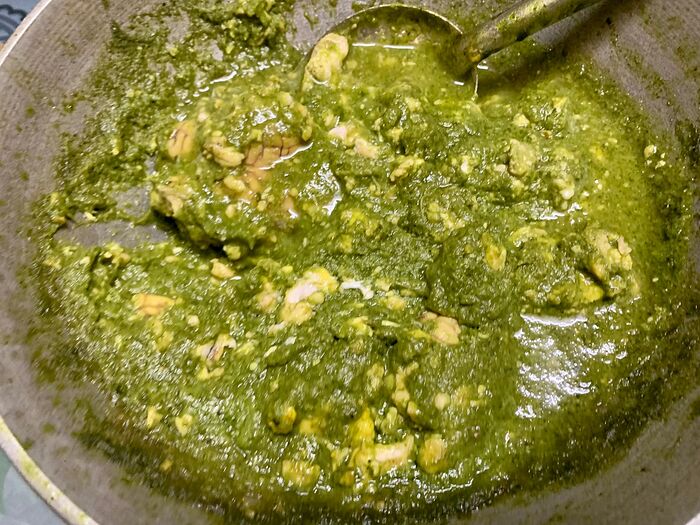 Has anyone else encountered udders as offal?

It’s a street food favorite in Mumbai, found at mainly Muslim stalls that set up in the evening to grill skewers of various things including a variety of offal.

Bad versions are rampant, but when a stall does it right it’s absolutely fabulous – tender, soft, rich. (Raw papaya is used liberally to tenderize in the marinade, along with a few spices.)

Other skewers found at these places include liver, kidney, and testicles.

Here’s the udder, known as Khiri. Served with a special kind of naan (more bread-like, probably originally from the northwest, Afghanistan or similar): 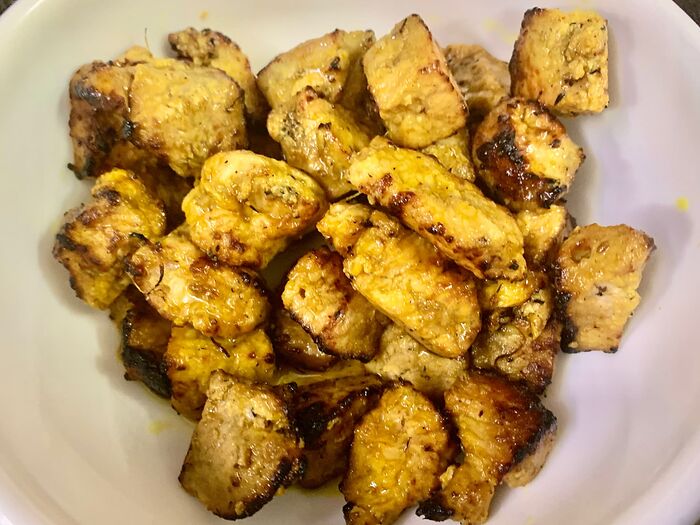 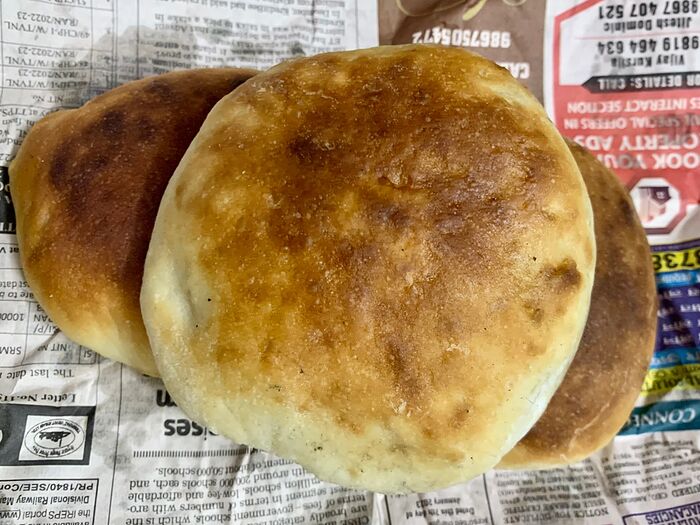 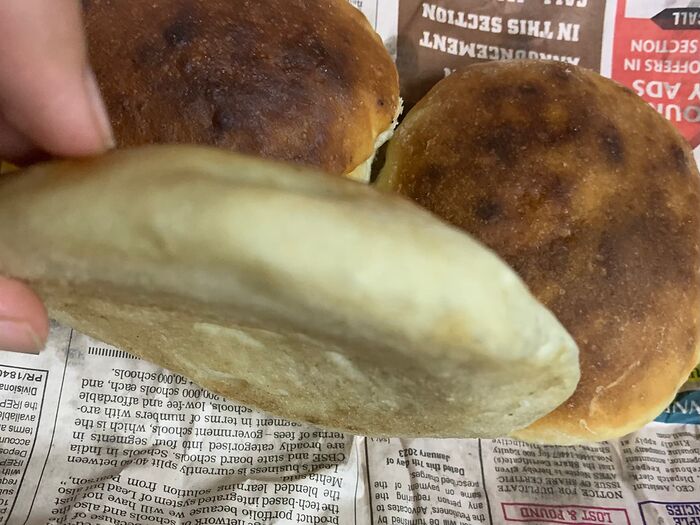 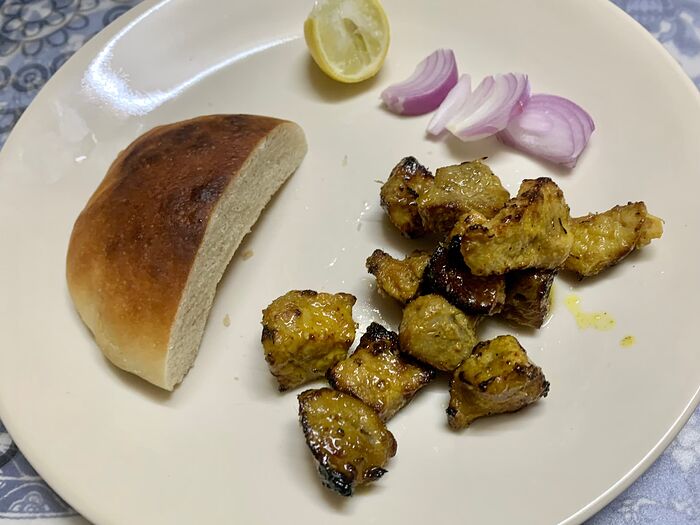 Has anyone else encountered udders as offal?

Yes - but not a close encounter.

When I was a lad, there was large chain of shops in northern England called UCP (United Cattle Products). They mainly sold tripe but, also, other less favoured bits like cow heel and elder (the local word for udder, as I recall). This was poor people’s food, so it never appeared on our dinner table but I do remember seeing all the bits in the shop windows.

I love veal sweetbreads. Here I braised some and used them in a Pithiviers, a French pastry normally consisting of two rounds of puff pastry enclosing frangipane. The swirls on top are the classic decoration for this “cake”. The puff pastry is purchased; I used to make my own until nature sucker-punched me. 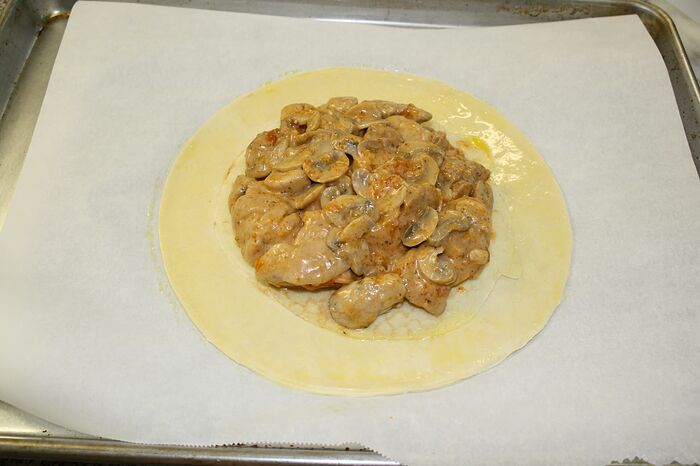 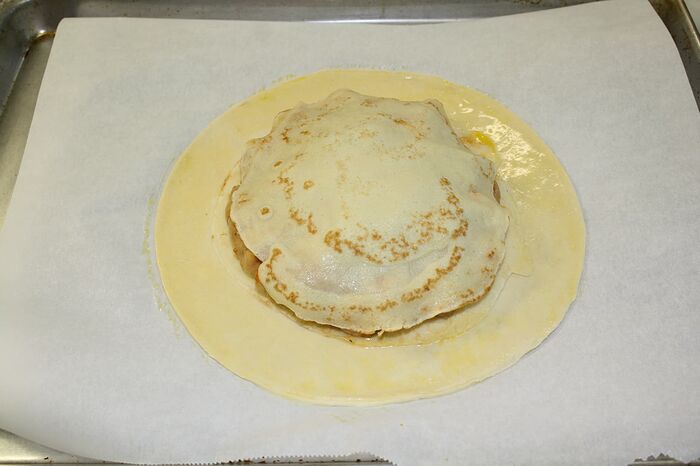 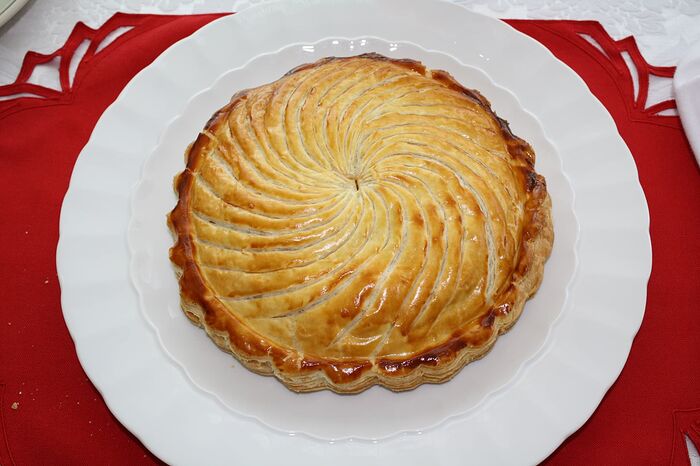 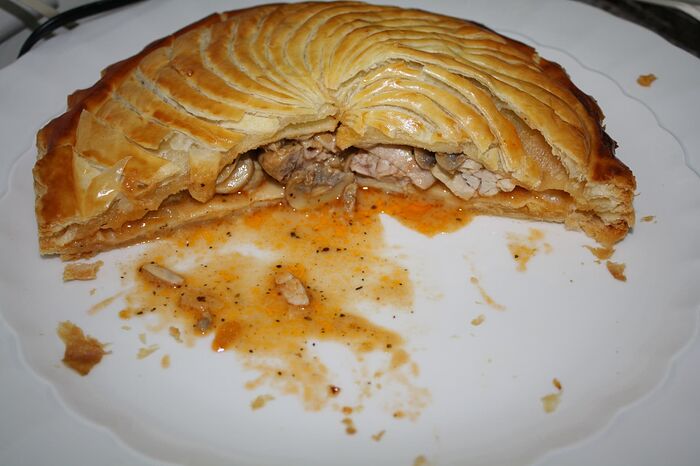 I love a savoury pithivier. That said, I love all pies but the pithivier is a particularly pretty looking one. Congratulations on your artistry with this one. And sweetbreads, eh? Delish

I just realized I never commented on “chittlins’”. Wash them well! Frequently served when I was little. I guess I haven’t seen them lately.

I love this song; " Bang-Bang" ( Corn bread, Hogmaw, and chiterlins") It was really good and a great alternative from eating the same thing everyday.

I read it was the organ that filters urine and if not cleaned properly you can taste urine.

I cleaned it properly.

I always saw chiterlings (aka pork bung) and want to try them next.

I bought tripe also and will likely parboil to clean off the chlorine and braise it. can’t wait!

I hope your first try is done right! I thought chitterlings were small intestine, and bung were large.

Apparently the definition varies; this one also mentions “hog maw”, I believe part of the stomach. 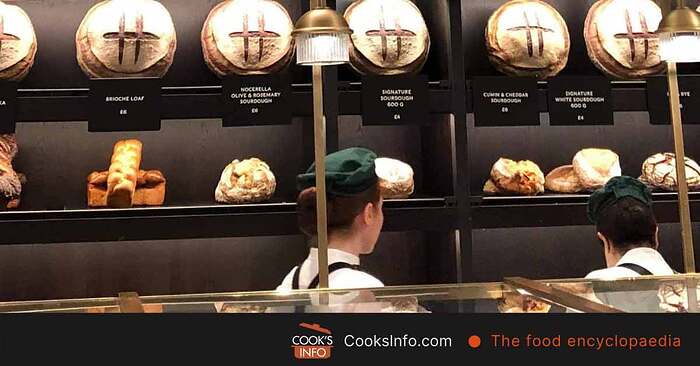 thanks for the link.

Hmmm… do you think there is there a difference between small and large intestine? Like is it just size or maybe one needs to be cleaned/prepped differently?

I was planning to just parboil in boiling water for 10 min (to clean). Take them out and then deep fry or saute with veggies?

Like…some recommend soaking in water in vinegar before parboiling but I wasn’t sure if that step was necessary - like what a waste of vinegar, water, extra work in cleaning extra bowls etc.

They sure look different when you are dissecting them! I’m guessing the texture is a bit different, and I think small intestine might be a bit more tedious to clean. PLEASE look it up. My memory of it was a much longer than 15 minute process, and not for the “the faint of heart”, (which is obviously not you) !

Also, I think you can buy them “cleaned”, but I’m pretty sure my family would clean them again.