What is going on around town?

I entirely missed this, but The Hungry I on Beacon Street closed last month after nearly 40 years. Somehow I never went there. Did any of you?

Moody’s is doing a preview of Pollo Club in the Backroom Wednesday Oct 3 and they are taking reservations. 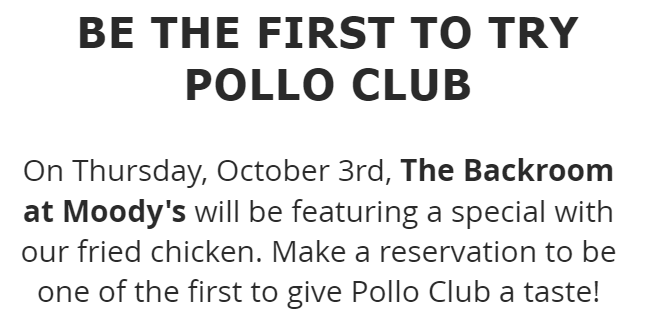 A bit late but Big Fun Cafe is open in Wollaston right across from the T. We are looking forward to try the stone-milled rice noodle roll but are waiting till the opening rush is over. I tried the made-to-order rolls at Joe’s Steam Rice Roll in Manhattan and it was sensational; hopefully this one won’t disappoint either.

Thanks for the heads up. I realize I haven’t really walked that side of Wollaston T since the station had closed for renovations, and I didn’t realize a new place opened up. Early reviews on Yelp make me weary, but since it’s so close to home I’ll have to give it a shot.

I got to the re-opening of Manoa a week or so back, first time I ever went here. They were out of the salmon so I tried the kalua pig, which was solid if not spectacular and I liked the whole plate lunch thing–perfectly fine rice, decent pickles, classic mac salad. Bought a spam musubi that I reheated for breakfast the next day, which was a glorious way to start the day. (I confess to being a total sucker for spam).

The place was hopping & the people who run it seemed super nice, good vibe all the way around. Will go back to try the chicken someday.

apparently (per Stewart Mason on the Friends of Hidden Boston group on Mark Zuckerberg’s evil overlord web thingie) there’s a new place called Tonkatsu King just about to open at Hong Kong Market food court in Boston/Allston (aka Packard’s Corner). I’ve generally not been that excited about stuff here, but man, would I love a good tonkatsu joint and sure am hoping this will be good. (The photo he posted makes it look sort of promising, if in a sort of generic food hall way. I suppose it’s good if a slightly poorly run and kept HK supermarket food court takes lessons from the generic corporate places springing up all over? Maybe? Can we hope?)

In any case, it’s kind of near Tacqueria el Barrio and that’s a new place that as a Boston Mexican food skeptic I very much hope to go to soon. Has anyone been? That they have birria on weekends is a great sign, and rumors of in house tortillas (the flour, at least) seem tempting. I hope to check that out soon. Will report back.

Manoa reopened?! That’s excellent news! Weekends only, I see. Will have to make a point of getting there soon for some ahi.

Agreed on the nice people part and I liked their poke best of the area offerings but they seemed a bit weak on the business side of things. I hope they can make a go of it this time around.

Anyone go to the Pollo Club ( Moody’s new concept)? I think they were supposed to open today.

I had no idea they were re-opening! Same place?

{re: Manoa] Huh. Interesting. With all the discussion of rents and property values around here, I am not hopeful that would be a sustainable business model. I reached out to them once a couple of years ago regarding an environmental/ocean/surfing non-profit I work with and they were downright dismissive and rude. I thought it would have been a great tie-in for them and was offering to host an event which would have brought them business. Thus, while I sort of want to see them succeed I have mixed feelings.

Craft Food Hall Project has locations in Lowell, Waltham, and Lexington, Massachusetts. Our food halls are conveniently located in the Cross Point towers in Lowell, the Post complex and City Point complex (on Prospect Hill) in Waltham, and minutes...

Oops! I just saw that Thimes created a separate post.

Anyone go to the Pollo Club ( Moody’s new concept)? I think they were supposed to open today.

I had also read that they were opening on Oct. 10. There’s nothing on social media, at least that I could find, so maybe it’s in friends and family mode. I’m very curious.

I had also read that they were opening on Oct. 10

I went to an event this past weekend and Moody’s was providing food - I asked one of the people working the table and they said it was opening this week . . . (week of the 15th), I think she said Thursday but don’t hold me to that. So any day now it seems.

Oh, thanks. I’ll keep my eyes open for reviews.

Per Eater, Angelo’s Coal-Fired Pizza in Quincy has closed. Went once and enjoyed it but nowhere near my normal beaten path.

We went a couple of times and found it mediocre. Got turned off when I saw the truck out back delivering the dough. What good pizza place doesn’t make their own dough?!?
CocoDan

I saw this and initially got it confused with Angela’s Coal Fired Pizza on Rt. 1 north. Are they related? Is that even there anymore? I thought they had good wings but didn’t love the pizza (at AngelA’s).