Long story short I found myself at the food court at Monmouth Mall today for lunch. While I got a platter of chicken and veggies from the Asian place I was surprised by a few of my observations while eating.

Salad works, Subway, Sobrero (or whatever pizza place it was) and Nathan’s are all gone. (Perhaps another place I couldn’t recall is gone) Salad works and Subway were both replaced by a new store but the rest remained vacant. That’s a 30% vacancy rate at a major mall food court.

Also I couldn’t believe the constant line at Chik Fil A. Check your political or religious views at the door Chik Fil A had a constant line of 1-2 dozen people in line the entire time I was there, which was 2:30-3pm, not even prime lunch hour.

The gyro place and the Cajun place did -0- customers and the way the cashier at the gyro place was distracted playing around it didn’t seem like she expected anyone the rest of the day.

I actually decided to take a pic however it doesn’t really show just how pathetic the rest of the good traffic besides Chik Fil A was.

Just out of curiosity does anyone know what the rent for a location in the mall like this is? 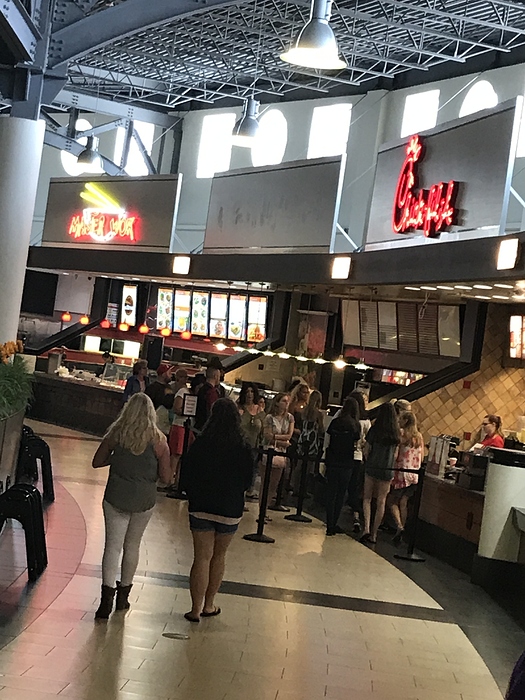 The owner of Monmouth Mall, Kushner Company, has huge plans to change it into a "new concept’ mall. Maybe that is being reflected in the vacancies. New businesses might be hesitant to come in with their future unknown.

For a fast food place Chick fil a is really good. For under $10, there aren’t many things better than a Original Chicken sandwich, waffle fries, and a shake.

What actually is a new concept mall?

Jr I think it is the fact that the food is good there, lots of people love fried chicken and there aren’t too many of them around here. My theory lol

I agree about Chick Fil A…they are my chain of choice.

What actually is a new concept mall?

They want to build apartments where the parking lots are now, add parking garages, take off some of the roof, and spiff up the food court and outdoor spaces.

Mostly it’s about adding the apartments.

Smaller malls are loosing out big time to Amazon and on-line retail.

Mostly it’s about adding the apartments.

This should read apartments/condos. If you want to see a particularly ugly example look at W Front and Bridge Streets in Red Bank, built around Danny’s Steakhouse. Just awful.

Oddly (or not) greed tends to produce ugly development. Saw it happen in Montclair.

really? apartments? the noise level in that area is deafening.

I agree. Where would these actually go? Would they take parking lot space or perhaps cut down woods behind the mall? (Not sure what is even back there)

A couple of weeks ago I went to a family wedding in Reston Virginia. There was a “Town Center” which is a well designed “down-town” area which consists of several “main streets” with each building being a combination of mixed uses. All ground level were retail, either shopping or dining, all above ground was either residential/housing/apartment or office. Imagine downtown Red Bank on steroids, with every building being 5-7 stories and having far more density of residential and office.

If you were to imagine the “main street” going from the corner of 36 (Chili’s) all the way back to the woods behind the parking garage. With the main intersection going from (east) the TGIF exit across to Wycoff Rd. (west) intersecting the Street. You would have room for a few smaller one way side streets and one or two multi level parking decks to service the entire area.

This has been proposed a few times in the past and the town has voted it down each time. For what it’s worth I had a great time at the Town Square in Reston!

Order the sandwich without a pickle. You’ll get a fresh hot one.

This kind of development seems to be the big trend these days, I see a bunch like this every time I travel. It feels weird to me - it’s like the Disney land of living. Although it’ll surely beat whatever ghost town the mall has turned into. Walked through the mall the other day and as usual, the food court was dead except a packed Chick Fil A and some people around BK. Man if I were running any of the other stalls I would want to murder myself.

agree- while I feel like it’s the flavor of the moment and I don’t really know if Kushner crew is the team to do it as I’d much prefer the Ironstate crew from Pier Village and Hoboken fame here, at least it would be an improvement over the garbage they have now. I drive all the way to Freehold now to ever use a mall- which is rare. A mixed use place could only be a plus over there, the folks in Eatontown could use some better development in town for sure. Maybe that would spur the development on the Fort too and really revitalize the area top to bottom.

I had recently travelled to a similar once in VA in Tysons Corner, while it feels a bit antiseptic at least it’s a place I’d like to spend time, not like the current iteration on the Monmouth Mall.

Maybe that would spur the development on the Fort too and really revitalize the area top to bottom.

Actually my gut tells me just the opposite. My guess is the town won’t commit to the Monmouth Mall project until something is decided with the Ft. Monmouth property. Right now the Mall is paying it’s taxes and isn’t a drain on the township, they wouldn’t want to scare off a potential Fort developer that wanted to put a town square concept on that property, and the area can’t support two of them that close to each other, especially not with Red Bank and Pier Village 10 mins in each direction.

I bet once something is decided with the Fort you will see progress on the Monmouth Mall project, but nothing till then.

you may be right- I was just thinking that with stuff like Commvault there already it might grow as a place of employment more as a way to entice businesses who might want employees who are well educated and experienced who might not want to slug into midtown every day. I’m not sure why more large companies haven’t thought to add corporate locations in a nice sweet spot between Philly, NYC, Wilmington, and Trenton for instance. Perhaps that might make Eatontown “pop”. Lord knows both they and Oceanport could use it, Long Branch too. I feel bad for those people in that bank branch behind the Fort on the way to the dog park, they prob thought they would be flush with base activity only to end up as a relic pretty quickly.Maybe then we could get a decent food operator at the Oceanport Marina.

Pier Village offers a view of the ocean, summer rental, college apartments. According to realtors I know, Pier Village has never sold or rented to full capacity and in the winter shrinks in tenants considerably. While the owners for PV and MM are the same the property certainly isn’t.

I haven’t eaten at the MM food court in ages but a better selection of vendors would def. interest me after a movie.

Retail shopping malls are slowly dying almost everywhere in U.S. Kushner saw an opportunity to remake MM as a place where the 55+ and millennials would want to live, work and play. This might work at some locations but I don’t see how two of these can succeed in Eatontown.