There’s been a major overhaul of the interior - entrance moved over, small bar where Pam’s entry counter used to be plus a few bright window-side tables, bright walls and light bamboo decor and furniture.

The food was good to excellent.

Service was spotty despite plenty of staff - they seemed overwhelmed by their own popularity (for eg: they practically threw the bill at us without asking if we wanted dessert, because there were a few people waiting, it was impossible to get serving spoons for the mains even though there was staff all around, and so on). 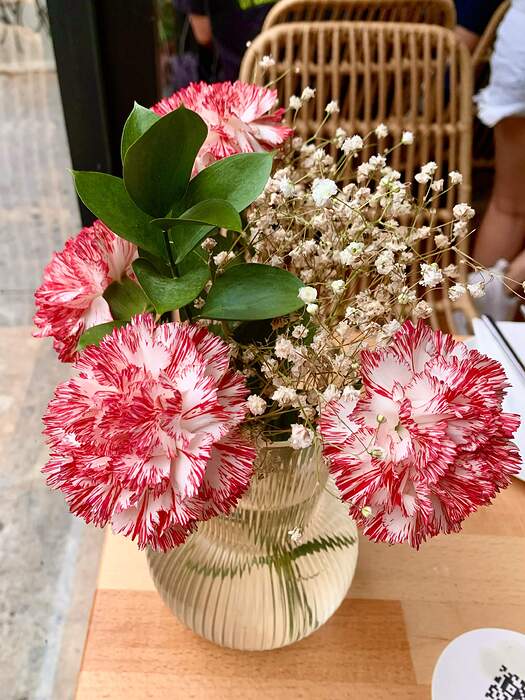 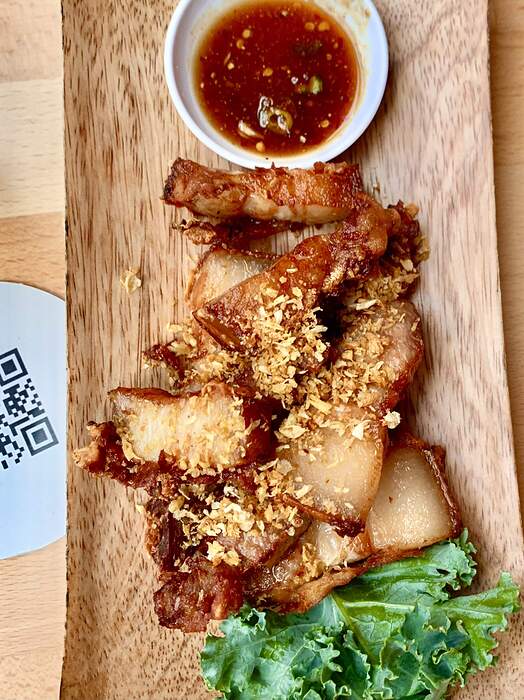 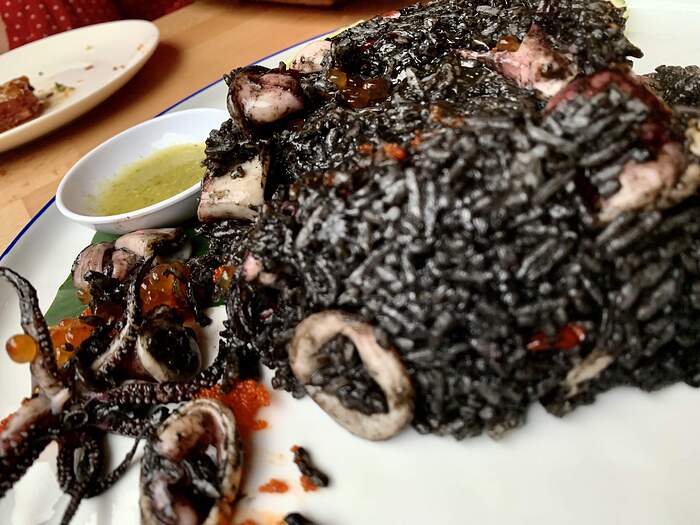 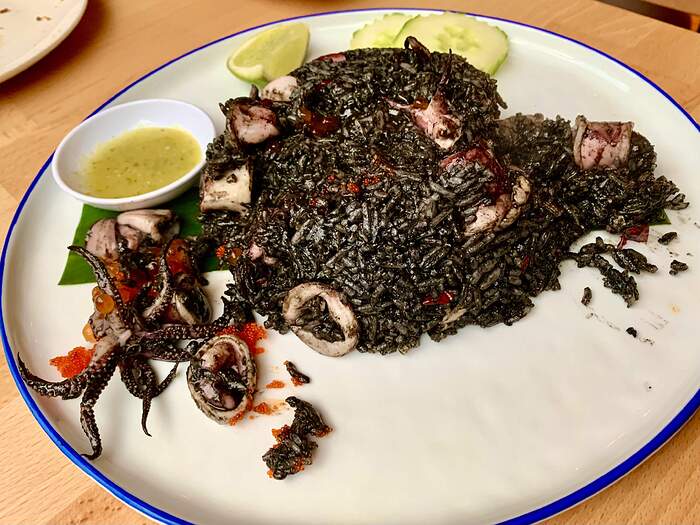 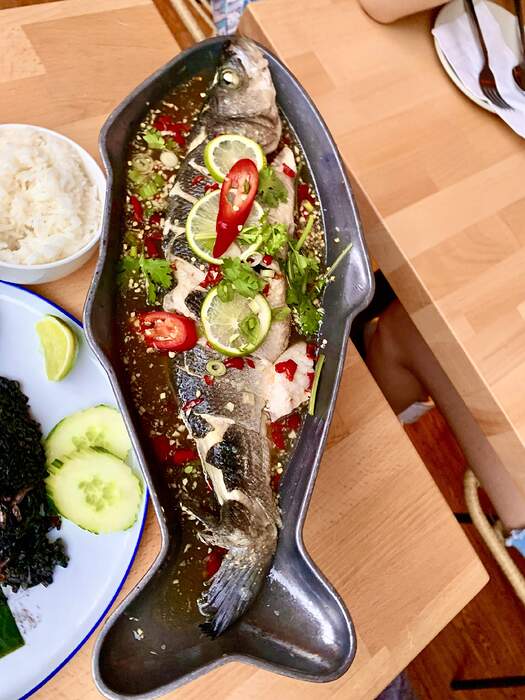 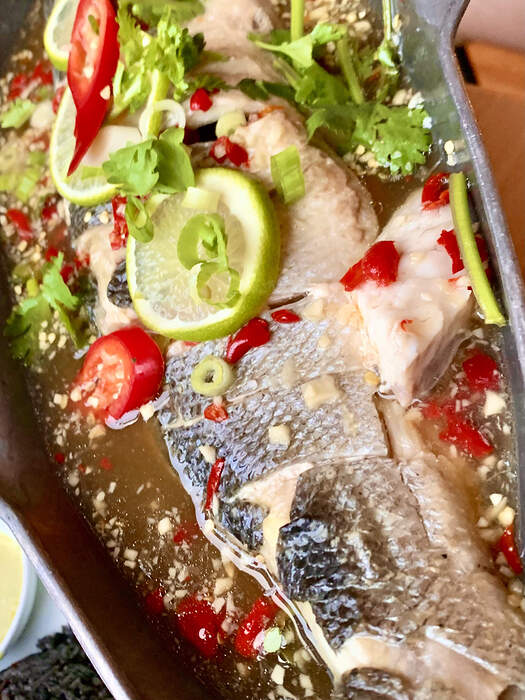 I’ll go back at a less popular time to avoid the service issues (and hopefully not get un-prepped ingredients).

There are a lot of other things on the menu I still want to try.

Thanks for the report! I found Pam’s spotty over the years, but at its best (such as a fish dish with 5 chili peppers on the menu), it was very good. Does their successor have outdoor dining?

So happy it was a good meal. I’ll try it once I’m able to return to NYC , for a meal before or after my Broadway shows!

you had me at pork belly! thank you for the wonderful report! 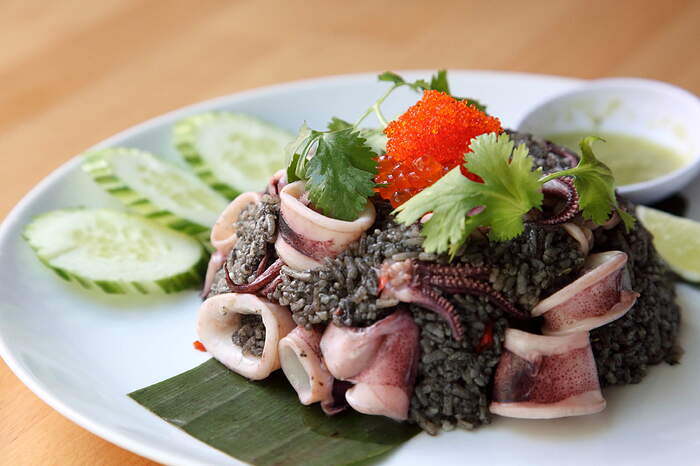 We had a HO group dinner at LumLum last night and tried more of the menu. 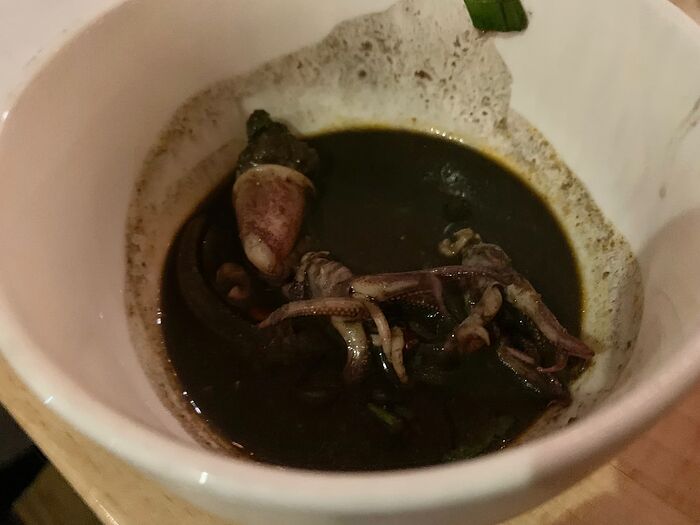 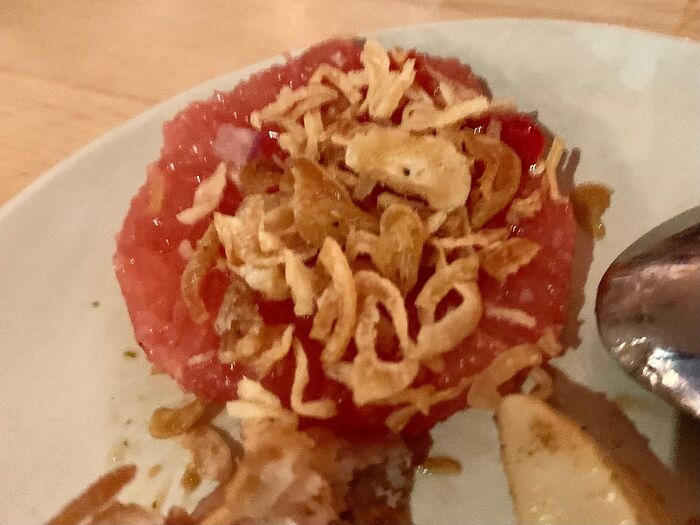 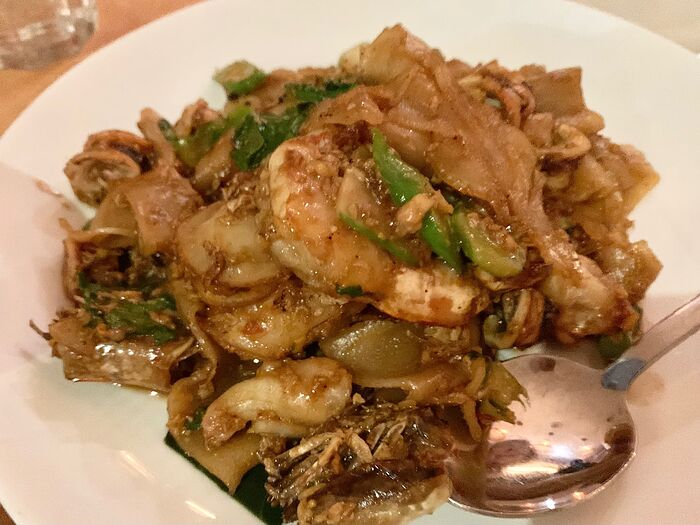 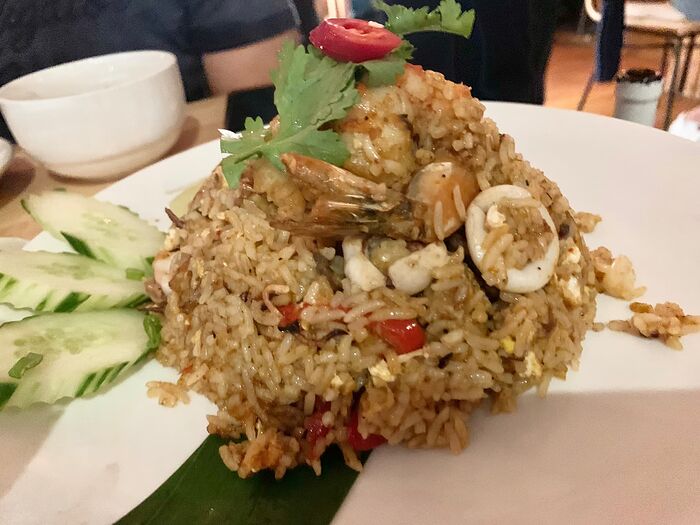 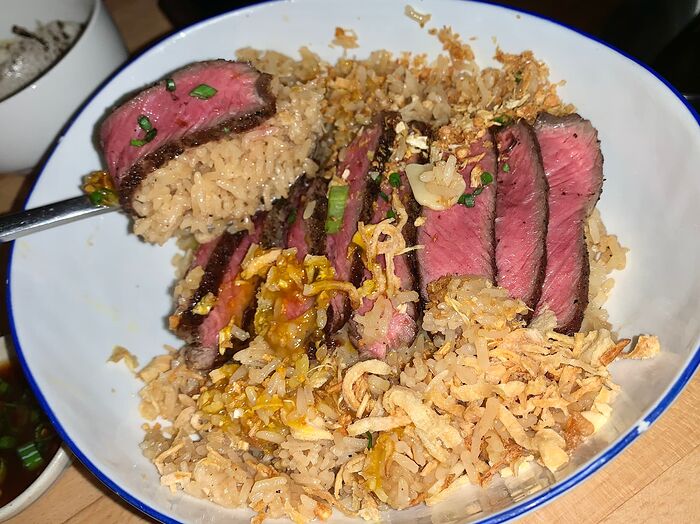 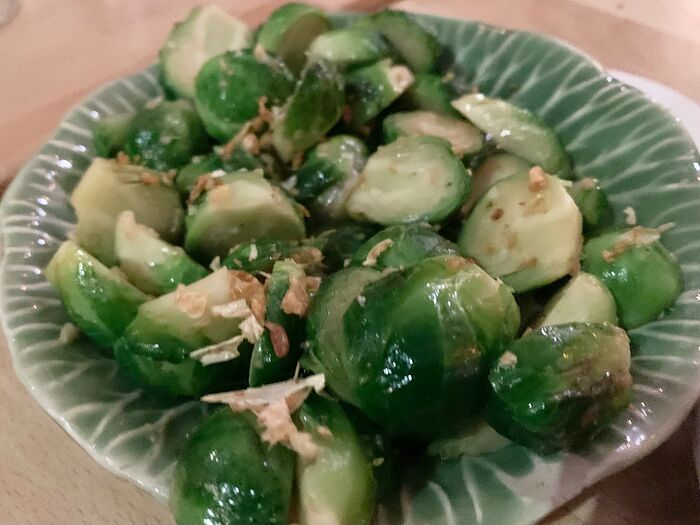 There were several things we would have tried had they been portioned to share, so that’s for another visit.

Service ranged from spotty to good. We had to wait a while for our table because a two-top lingered on, and finally had to be asked to vacate the table (even though the long line of folks waiting was obvious).

My faves were the the squid soup, the fried fish and the pad ki mao. Love those green peppercorns. 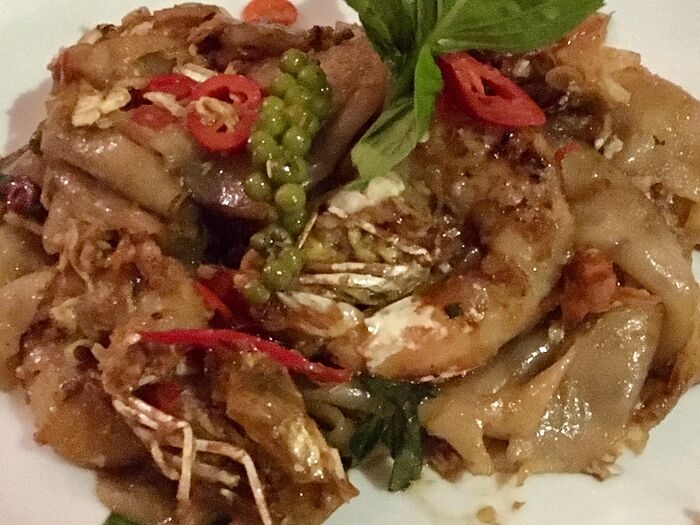 I did want more heat from the food, though. It was definitely de-spiced and be-sugared for the non-Thai palate.

small_h hit the nail on the head, I thought it was delicous thai comfort food fashioned for the american palate. And while I liked the steak dish, imo it’s crazy for Sietsema to mention it in the same breath as some of NYC’s finest steakhouses but then, I’m often left scratching my head after trying some of the dishes he likes.

thanks to @Saregama for organizing, it was great to see everyone before we head South and looking forward to a holiday get together in Dec.

p.s. Thanks to @ninkat for brining the delicous white Tempranillo!

I realized when I was writing up what we ate that we didn’t add the crying tiger sauce after mixing in the yolk… duh.

And thank you to both @vinouspleasure and @ninkat for the lovely wines they brought.

we had a great evening with this bunch, thanks so much to @Saregama for taking the lead and to @ninkat and @vinouspleasure for generously sharing wine. Food was tasty - the squid ink soup really got me in a good way. Also liked the fried fish (far from super spicy as advertised, fairly conventional with medium hot red chiles and thai basil ) the grapefruit salad, and the pad ki mao. Over all I enjoyed eating the food but definitely toned to western tastes. Wished we had gotten the beef curry - the quality of the meat in the crying tiger was great, but the dish was rather bland,no reason for tears! Looking forward to the next dining adventure!

Adding my appreciation of our dinner Thursday night, and reporting back about the redo (of sorts) last night. I wouldn’t return for pre-theater. The food was again good. They were out of the crab curry so we had the beef Penang that @vinouspleasure had been hankering for. Might have been the best thing we ate, though the steamed whole fish (thanks for the recommendation @Saregama) was also quite good. We settled on the crab fried rice, as my companion was looking forward to some crab, and it was good but, well, just fried rice…Also, I had a cocktail, the Samui Sunset, ordered after I determined it wasn’t over sweet. It wasn’t sweet, but had no mezcal or chili flavor (reasons I ordered the drink), maybe a little limey and pineapple-y, but just not (to me) a great cocktail.

The issue last night was that we made a 6 pm reservation for an 8:00 curtain, and they literally asked (had started by taking the water bottle off the table) us to leave by 6:50. It’s not dining for me at that point. They asked as we put our butts in the chairs for a drink order and came back three times while we were reading the menu (I don’t think we were slow ordering). They do not course anything there (I had noticed this the on Thursday night). My companion happens to wait tables in between theater gigs, and she said minimum a restaurant at a bar should give patrons is an hour and a half before they even make noises about needing the table. We both did understand that they are busy, so if I ever went back pre-theater, I would book for 6:30 for an 8:00 curtain and hope they had the table when I got there…They do get busy, and reserving means you get the next open table, far as I can tell.

The upside was we had time to walk down restaurant row on 46th Street, and I made a reservation at Orso for next week pre-theater. They also gave served us coffees that LumLum said they didn’t have. Orso looked to be a somewhat older, non-happening place, and I haven’t eaten there in years, but they seemed happy to have us for a half hour or so. The other upside was that the play, “Cost of Living,” at MTC was terrific. The play itself is taught and thought-provoking, and the 4-person ensemble cast is fantastic.

given your day job, I suspect you know more about us than we know about ourselves, I had no idea I was hankering for penang beef

Thanks for your review of cost of living, it’s available on the TDF site, hopefully we’ll be able to see it when we return.

ps As someone who worked their way through college waiting on tables, I’m starting to think I need to teach you the waiter’s secret handshake

perhaps as I age I make more spelling mistakes, but, as I’ve said in the past, it’s so annoying to read a past post, see a mistake and not easily make a correction.

Well, I sure know a fellow “sponge” when I see one.

Not sure I have the hand-eye coordination to manage the “secret handshake,” but willing to try!

I hope you guys have a blast on your holiday (and looking forward to the day we get Mme. @vinouspleasure back in Paris). Will settle for holiday something in NY when you get back.

thanks, i know, but then i have to contact a mod, tell them what needs to be changed. i guess I don’t understand the downside of allowing users to edit old posts. i’m sure this has been talked about in the past.

Someone explained it elsewhere the other day - and I think it was to do with spammers. Or wait - there’s this too.