By the time I got around to this one, cauliflower had arrived in the CSA box. For the heavy cream, I used a truffled cashew cream sauce from Charity Morgan (Unbelievably Vegan is her book), thinned out with water to the right consistency. To make this, you combine in a Dutch oven the cream, harissa, salt, pepper, and cauliflower, along with some canned tomatoes (tomatoes only, no liquid). You bring this to a simmer and cook until the cauliflower is tender, mashing everything together along the way. You finish with more salt and pepper and more harissa if needed. I used extra harissa from the get-go, because the recipe has you starting off with just 3/4 tsp. The cauliflower is served over slices of bread.

I can’t really put my finger on what it was about this recipe, but I just didn’t like it. As in stopped eating after a few bites. Mr. MM ate his and liked it just fine, so I guess it’s me. I like harissa, I just didn’t like this combo. 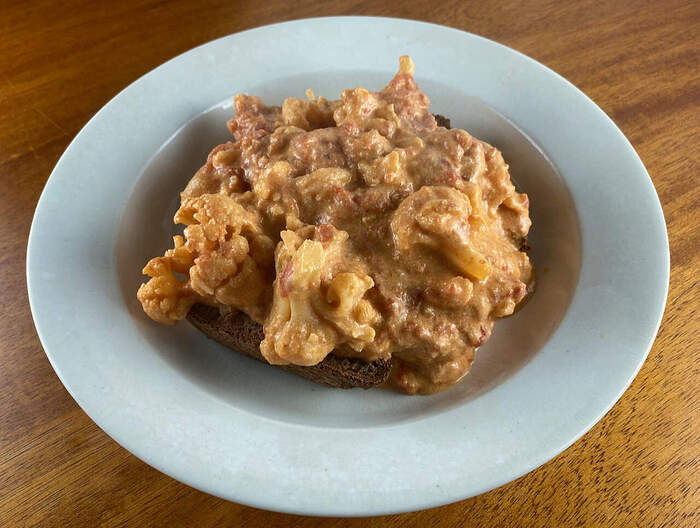 Glad to hear you liked this one as it is on my short-list to try.

I didn’t look at this recipe too close because I like a little pasta with my sauce, not possibly dry corner pieces. This seems kind of a strange way to make this to me. Baking crushed tomatoes? No garlic or herbs. NO GARLIC! I agree with you about the sheet pan sizes, I would’ve done the same. I love baked pasta but this seems a bit of a nuisance.

It’s time to vote for our December book! New participants are always welcome.

Here are our community-nominated choices for December 2022: ARABESQUE by Claudia Roden earned four nominations. [image] The following each garnered three nominations: SABRINA GHAYOUR month. She has six books, the latest of which is Persiana Everyday, and a rather small number of recipes on her website. Many more of her recipes can be found on BBC Food, The Guardian, and other sources if you do a search. [image] MEXICAN EVERYDAY by Rick Bayless. [image] To vote, click on the knife-and-for…

I made a half recipe of this to serve one. There are anchovies called for both in the pasta dish itself and for the bread crumb topping. I used the vegan anchovy paste that I invented for that Nigella Lawson recipe in Cook, Eat, Repeat. You start by cooking the anchovy in olive oil with some sliced garlic. Then you add kalamata olives, a lot of tomato paste, capers, red pepper flakes, and salt. That gets cooked until the tomato paste darkens, then you whisk in some water and bring to a boil. Small pasta goes in (I used ditalini) along with some spinach. This cooks until the pasta is tender, which for my pasta, did not take anywhere near the 10-12 minutes suggested. Meanwhile, you heat up some more anchovy in olive oil, then add some panko and season with salt and red pepper flakes. This is used to top the pasta.

I didn’t subject Mr. MM to this dish because I knew it wouldn’t be to his liking, so he ate leftovers while I had this. I did expect that I would like it, since I like all the ingredients. And it was alright, but it isn’t calling me to have it again. I mean, there isn’t much advantage here over a regular pasta puttanesca, which I would like better. This comes out more sauce than pasta, and to be honest, it didn’t sit that well in my stomach. I felt the need for a Tum later. So I’ll be sticking to more traditional versions. 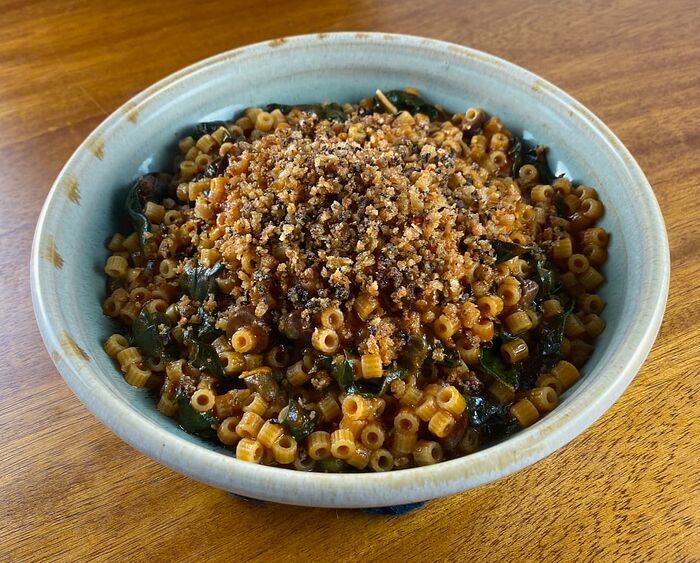 COTM community, we need your help breaking a tie for the December book. Which one would you like to cook from or at least read about as others cook and report?

Here are our community-nominated choices for December 2022: ARABESQUE by Claudia Roden earned four nominations. [image] The following each garnered three nominations: SABRINA GHAYOUR month. She has six books, the latest of which is Persiana Everyday, and a rather small number of recipes on her website. Many more of her recipes can be found on BBC Food, The Guardian, and other sources if you do a search. [image] MEXICAN EVERYDAY by Rick Bayless. [image] To vote, click on the knife-and-for…

or at least read about

Actually I think COTM voting has always been for folks who plan to cook along — it would be pretty unfair to have folks who don’t plan to cook decide what those who do should be cooking!

@maestra, as coordinator for the month, when there is a tie, you get to vote to break the tie. And as Saregama says, people should vote with the intention of cooking along. It isn’t really fair to those of us to invest in the book and ingredients to have non-participants deciding what we’ll be cooking!

I may vote later on this evening, if the tie’s not been broken. I haven’t nominated/voted recently due to life situations, but I should be able to participate a bit in December (I hope). 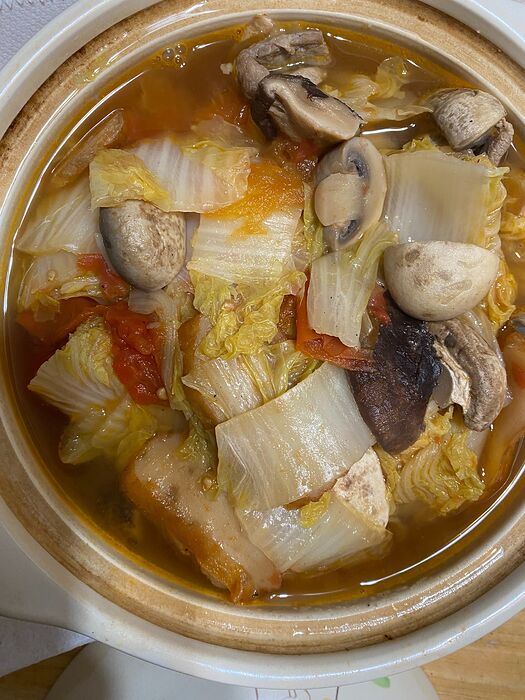 My family and I went out of town for the holiday, so I’m a bit jetlagged, but still managed to get this dish (plus what turned out to be an unnecessary roasted chicken also from the book - see next post) made for dinner without too much fuss. The flavors are reminiscent of the yellow rice from the halal street chicken recipes I like (from Smitten and Serious Eats), but with added chickpeas and a different sauce.

The basic technique involves boiling rice and chickpeas together until the rice is al dente. Meanwhile, you fry onion in olive oil until soft and sweet, add spices (turmeric, then cumin or coriander - I used 1/2 and 1/2), then the cooked rice mixture and cook undisturbed in a nonstick pan until there’s a crust on the bottom of the rice. Sprinkle chopped dill on top and drizzle with a tahini dressing that I thought was too sharp at first, but turned out to be a nice contrast to the rich dish. All in all, a very good veg dish that I will def make again. 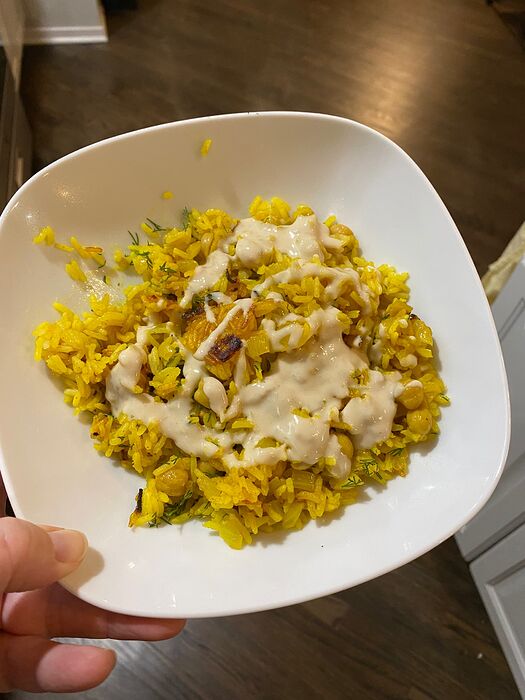 ALL THE TIME CHICKEN THIGHS p. 268

I worried that I would wish for more protein alongside my rice and chickpea dish (I didn’t), so I also made these simple chicken thighs to go with. They involve a marinade of olive oil, salt & pepper, lemon zest, garlic, smoked paprika, coriander, and cumin. I marinated them for probably an hour or two, though the recipe says you can use them right away if you wish. Then you have your option of how to cook them - I roasted them in the oven. I found them deeply boring (perhaps grilling would give them more taste?) and neglected them in favor of the rice dish. If you are looking for a super basic chicken recipe, this is fine, though I think there are probably better ones (I’ve heard the one from Small Victories is good…)

I liked this a good bit–was somewhat surprised, as although I like capers, I was unsure how I would like them in this but found it really worked. The dude, who is usually indifferent on most things dairy, liked the feta. I am sure I adjusted down on the garlic and harissa, but for god’s sake don’t add any salt! 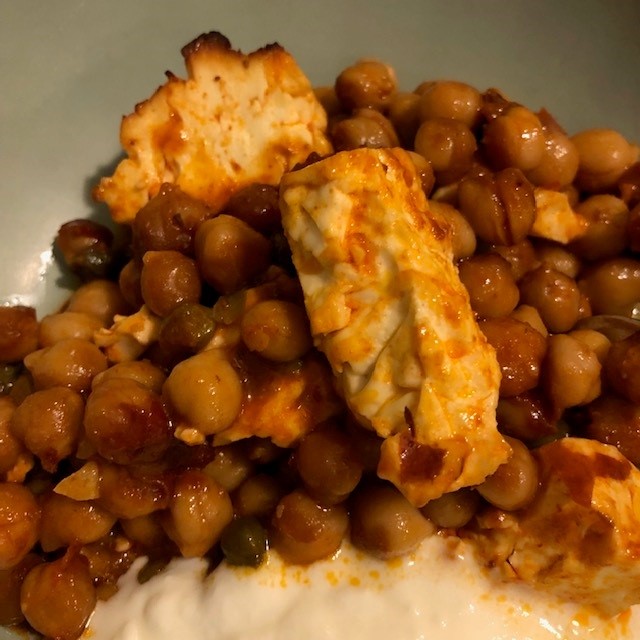 I made this recipe as written other than the serving suggestion - she recommends serving these meatballs with toasts rubbed with garlic and slathered with ricotta. Instead, I just served them on linguine. Overall, I found them pretty easy to put together - you just mix ground beef, pork, ricotta, parmesan, salt, pepper, and torn up basil together. Form meatballs and fry them in a Dutch oven (the worst part, but I sucked it up), pull them out, make a simple sauce out of crushed tomatoes, garlic, red pepper flakes, and more basil, then simmer it all together for a while. The meatballs aren’t the best I’ve had, but in the scheme of things, they are pretty simple and overall tasty, and the recipe makes a lot (so now I have lots frozen!). I do think the browning step is important for the flavor of the sauce, though, and I really hate frying meatballs, so I doubt I will make these much in the future. Still, all in all, not a bad recipe and one I would certainly make again if I had ricotta to use up. 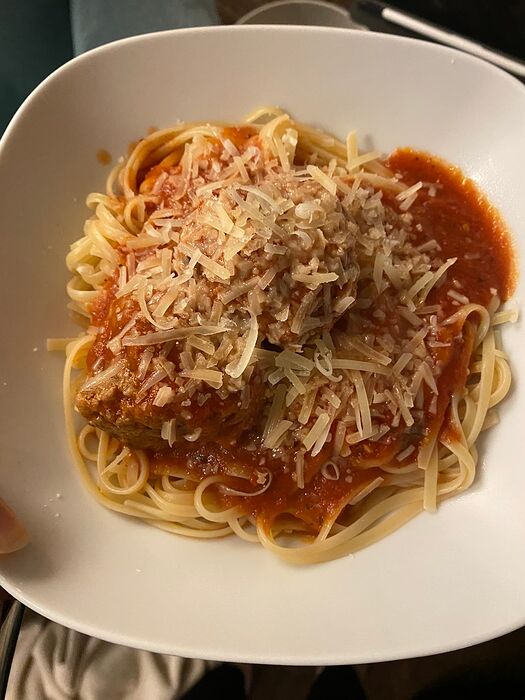 Super simple, as is the norm for this book. I used a mix of broccoli and cauliflower for this, as I didn’t have enough broccoli alone to make it, but there was cauliflower in the CSA box as well. You start by sautéing some thinly sliced garlic, peeled and chopped broccoli stems, and anchovies in butter. I used my homemade vegan anchovy paste for this recipe (been getting plenty of mileage out of that stuff). You then add spaghetti, the broccoli florets, salt, red pepper flakes, and water, and cook, tossing the spaghetti as it softens, until the pasta is done. Serve with grated parm. This is really simple, but we enjoyed it. I might add some extras - I think sun-dried tomatoes would be nice. Would repeat when I have broccoli (or cauliflower) to use up and want a quick and very easy meal. 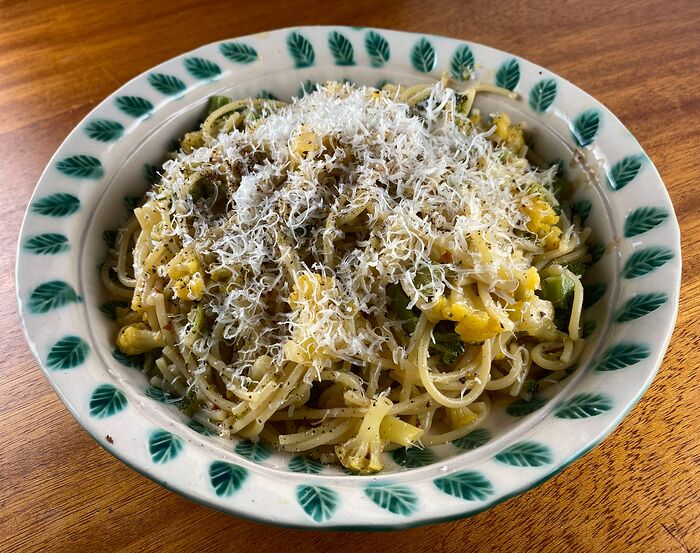 Not the prettiest dish, but it has the same warm, gloppy comfort as refried beans do. Except with a Euro twist. To make this, you sauté onions in butter until soft, add some thyme, and continue to sauté until onions are brown and jammy, which takes a heckuva lot longer than the 10-15 minutes the recipe says. So this isn’t a super quick dish, but it is still very easy. When you have the onions done to your liking, deglaze with some cider vinegar, and add white beans and stock. Sprinkle cheese on top, then pop in the oven. The recipe suggests cooking 5-10 minutes, until cheese is melted and browned. Well, with the amount of liquid in the pan, nothing was going to be browning. I cooked a little longer, then popped under the broiler for a bit, then decided I didn’t care about browning and pulled it out. We liked these fairly well. I’d make them again as a part of a meal, but maybe not as a feature. 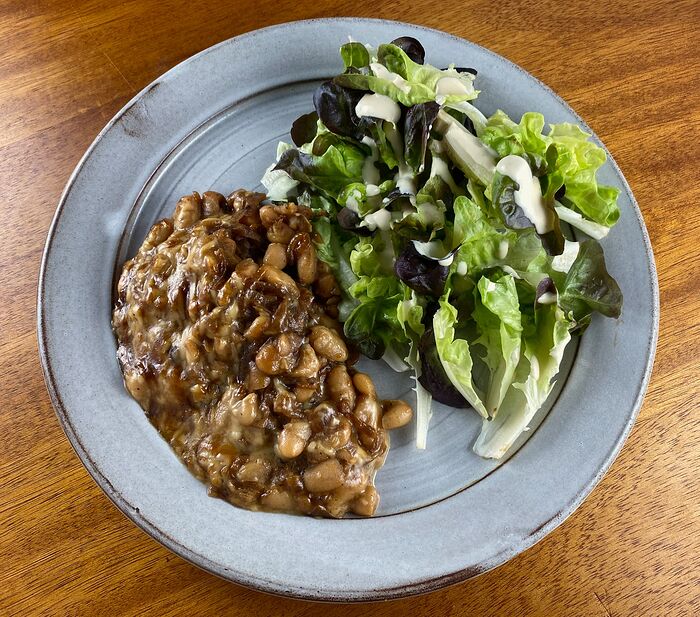 I’ve had my eye on these - they sound so good. Glad to hear you enjoyed them (and yeah, no way are the onions going to be ready in 10-15 minutes).

A fusion ragù of sorts. I used Impossible instead of ground beef. I also reversed the cooking order a bit. The author has you start with browning the meat and then add aromatics, which cook in the fat given off by the meat. I started by sautéing the aromatics (onion, garlic, and ginger) in a bit of oil, because I didn’t think the Impossible with render enough fat. You mix in some brown sugar, gochujang, and tomato paste, and then add water and soy sauce and simmer. I did end up adding a bit more water because I thought my sauce was getting too dry. You are to serve this over any starch. I chose gluten-free ramen noodles (rice and millet). I threw a bunch of fresh basil on top. We really liked this, far more than expected. The flavor is definitely more Asian than Italian, though not particularly Korean. The basil, which is not called for, makes it seem almost Thai. It’s a very umami-packed sauce. Will repeat. 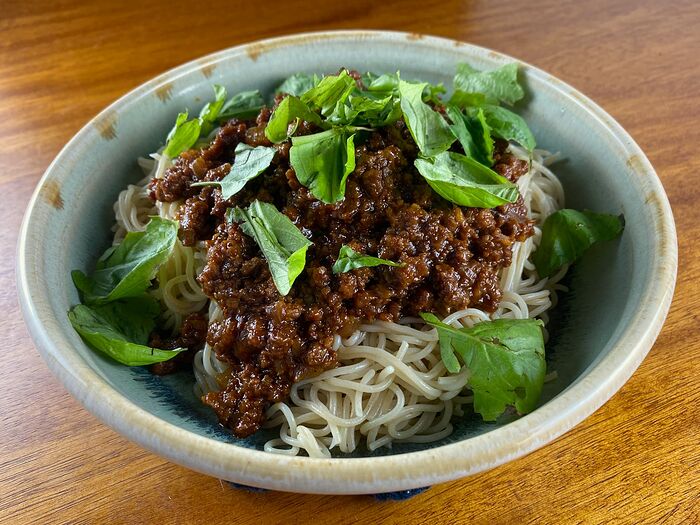 Where do you typically buy tempeh? Regular grocer or Asian?

I also liked this one a lot (made it before the COTM month), though I found it much improved on day two compared with day one. The flavors took a while to really meld. I served it on udon (which was a great combo ) - I think the basil sounds like a delicious addition.