The months just keep ticking by, so it’s time for another edition of openings and closings. What’s new? What’s gone?

Tory Row in Harvard Square closed over the weekend. Can’t say I will miss it at all. In my dreams the Greenhouse would come back to replace it.

wasn’t there a muffin and kettle or something like that in that location in the 70’s? I recall it as being better than the Greenhouse. I never ate at Tory Row after looking at the menu often,but it seemed to be a rather cynical enterprise. I doubt anyone will miss it.

The cafe’ at Urban Hearth has opened on Mass Ave. in Cambridge. The supper club there is slated to open in late November, according to the website.

Driving by the soon to be rebooted East Coast Grill today, there seemed to be a lot of activity with the build out. They still have a fair amount to do, but fingers crossed for before the end of the year.

The muffin place rocked!!! They let you sit forever, us scrunchy teens. I haven’t nursed a muffin that way since before the beginning of time… @Madrid you have made me smile.

my favorite was the blueberry muffin, toasted, then covered with (fresh? unlikely) blueberries and whipped cream. I wasn’t a coffee snob yet so their coffee was fine. It took me a couple of hours to eat while talking incessantly. It was 1974.

A Harvard Crimson article states that it closed in 1986 and opened in 1979. But there was definitely something with muffins and mugs there in 1974.

Charlie’s used to be right there on Brattle St. as well…a buffet with texas toast.

And there were many, many bookstores. This college freshman from NC was stunned by the many languages other than English spoken on the street, that so many people bought ice cream while walking on snow, and one of the first frozen yogurt places ever.

I may have speculated that Opa Greek Yeeros in Davis Square was on permanent vacation last month. However, their doors are once again open, although walking by I’ve not seen much traffic.

Moona in Inman Square is open. This may have already been reported. I heard from the folks at Inman Oasis that their coffee is excellent.

Are we talking about the old Mug N’ Muffin? Loved their omlets - twice weekly got me through morning applied math class. And they did let you sit…

Open from 1979 to 1986. The one I am thinking about would have pre-dated this place. But, you have a darn good memory!

EDITED: Just not sure of the dates… but I thought the place I was thinking of would have been open in 1974.

That math class may have something to do with my vivid recollection…would have been 77/78 academic year.

The Greenhouse came later - across Brattle in the corner of the Coop building. Mug 'N Muffin was below the German place - Wursthaus?

apple math. The Mug and Muffin I remember was not under the wursthaus in 1973-74, it was where the origins cosmetics store or tory row was, that got changed to the Green House. really near Cardullo’s, definitely on the Coop side. Or I think so. I have vivid memories of the sign and the location, since I trudged there without snow boots, being from NC and not knowing I needed snow boots. The sign was really distinctive. I don’t think anything was under the Wursthaus…wasn’t it street level?

OK, I did a search on the other site … I’ve been told it’s actually good to post URLs from “them” here as then this will come up in searches.

The place I remember was Pewter Pot. It predated Mug n’ muffin.

lots of nostalgia on this thread, including the place where I bought my first coffee beans, Cambridge Country Store, near Harvard Law School/Radcliff.e

Which Boston-Cambridge restaurants have been around since the 1980s? -...

Read the Which Boston-Cambridge restaurants have been around since the 1980s? discussion from the Chowhound Restaurants, Boston food community. Join the discussion today.

Oh yeah, Pewter Pot. That was on the Coop side. Mug N Muffin was defnitely across the street. Wursthaus had an upstairs dining room, and I vaguely recall you could enter from Mass Ave or Brattle. I think Mug N Muffin would have been a Mass Ave address.

The Pewter Pot!!! Bingo! It was around the corner from the Coop, and right near Sage’s. 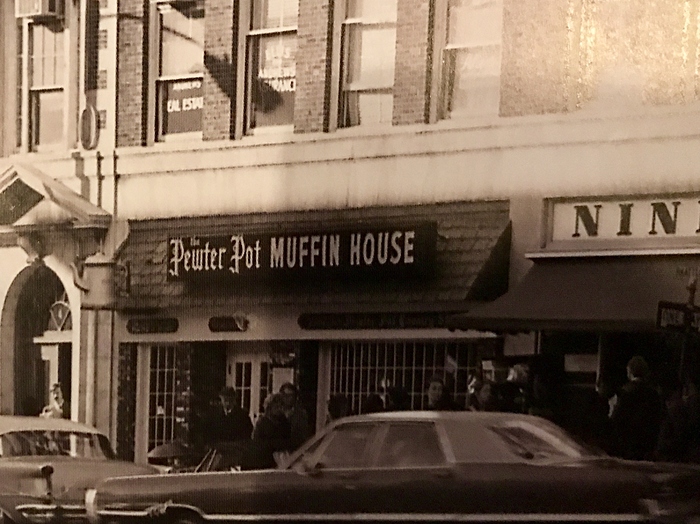 @uni What a great picture! That is what I remember, except that I didn’t. I spent hours in this place, with my violin case tucked under the chair. I was just a kid, but played with several Harvard bands like Harvard Bach Society and I hooked up with a bluegrass group that rehearsed in the Square. Gosh was I young! The world was a non-ending opportunity fueled by those grilled muffins.