Just came across this article. Who has anything to add? I always love a restaurant mentioned here - Champlain in the theater district - but could never remember the name. Another one I loved that many don’t remember is Restaurant 68, an Italian on Fifth ave in the village - 68 fifth?

I loved the miniature baked bean pots at Horn & Hardart when I was a kid.

SOME, but not me, may be nostalgic for Stouffer’s Top of the Sixes. I worked there in early 1962 as a bus boy and as attendant to the flaming dessert wagons.

Stouffer’s Top of the Sixes

I had my wedding shower there…wedding 1.

There’s a contemporary angle here. The building it was located in was (maybe still is) owned by Donald Trump’s son-in-law Jared Kushner, who lost his shirt on it.

Gwenn, thanks for posting. Memories indeed…I do recall enjoying the Pu Pu Platter at such kitschy spots as Luau 400 and the original Trader Vic’s at the Plaza. Budapest Café served a delicious cabbage soup and boiled beef with horseradish sauce, too…

Permit me to open the floodgates here: My earliest palatal memories in West/Fair include: the delicious French Onion Soup topped with crusty cheese at Le Shack, Mamaroneck & White Plains; Chef Maxime Ribera’s Lobster Napoleon and Crème Brulee at Auberge Argenteuil in Hartsdale and Maxime’s in Granite Springs; my first taste of Tiramisu at Sergio’s, Hartsdale; and fresh made Sauerbraten at Town Tavern, Bronxville…

Gage and Tollner on Fulton St. Brooklyn. We always went there to celebrate an event.
Sutter’s Bakery on Flatbush Ave, Brooklyn. I’d pick up still warm pastry for my ride to work in the morning.
Chock Full O’Nuts for their whole wheat donuts and cream cheese sammiches on date and nut bread.
Carolina Italian Restaurant in Coney Island for amazing Italian comfort food.
Lin’s Garden for their unique Lin’s Chow Fun and Sweet and Sour soup.
Kam Bo, next door to Lin’s for their amazing Chow Fun
And the legendary Foo Joy for Fukienese and gambling in the back room.
LaCorsa in East Harlem. Amazing creative pizza and Italian entrees that were too good for the area.
Tokyo on Lexington for amazing authentic Japanese food and ambience.
DaCiro on Lexington for old school red sauce and pizza. Building sold and torn down.
The numerous Syrian and Yemeni restaurants on Atlantic Ave, Brooklyn.
And of course Lundy’s in Sheepshead Bay with their amazing oyster bar and shore dinner. I can still taste the biscuits.

And let’s not forget their cinnamon buns! I used to love an Italian on Irving Place - Paul and Jimmy’s place. There was a bakery on third Avenue in the 80’s I think called Leonard’s. Place was awesome. I love coffee flavor and they made a mocha mousse cake that was wonderful. Going into Astoria a wonderful bakery called Norgaards. They made the best rainbow cookies, with marzipan and a concoction called compartment cake - 4 sections, 4 different fruits.

Paul and Jimmy’s is still there. It’s actually on E. 18th St., between Irving Place and Park Ave. S. Though it’s a short walk from our building, we’ve only been there three times over the years, the last being a family dinner at the end of 2012. (Photos) Pleasant atmospherics and while the food is decent, it’s nothing to rave about. We much prefer Maialino which is even closer. True, it’s a different style of Italian cuisine than P&J’s – Roman vs. Italian-American – but, imo, superior.

Yes, they moved. Originally they were on Irving itself. Not a lot of atmosphere but really good red sauce Italian. I’m going back to the 70’s here!! Yes, I’m sure Maialino is better!!! Totally different place!!

Foo Joy was my family’s favorite restaurant in Chinatown in the early 70s. We were very disappointed when they closed.

Other memories from the 70s, as an Upper West Side kid:

Gitlitz Delicatessen on 77th and Broadway. My parents loved the pastrami and I ate roast beef there, which satisfied me.

Ratner’s; it was still good in the early 70s.

Chun Cha Foo, 92nd and Broadway, claimed to serve “Mandarin” cuisine. When they had their good chef, they were quite good, but there were a few years in between.

I’m forgetting the name of the Sichuan restaurant that occupied the 2nd floor of the building that took up most of the block from 109th to 110th Sts. on the west side of Broadway. Szechuan Taste or something? It was very good in the late 70s but didn’t last very long.

There was also a time in the mid 70s to the late 70s or early 80s that the original 97th St. and Broadway location of Empire Szechuan was good, though never really Sichuan-style and never as good or interesting as the restaurant on 110th St.

Interesting, some of our favorites from back then still exist today:

El Malecon, Amsterdam between 97th and 98th Sts. (plus other locations)

Nom Wah, though not a favorite of mine today.

New York Noodletown, which I think opened around 1978 (maybe one of you remembers).

Yonah Schimmel, though I haven’t been in years and haven’t been impressed since the early or mid 70s. (I don’t know if it deteriorated and/or my taste changed.)

My family’s favorite restaurant in the 80s (for birthdays and other celebrations) was JoJo. It’s still there but I haven’t been in years and had the feeling after a while that it suffered from no longer being Vongerichten’s flagship.

Yonah Schimmel still a great knish. I loved Eclair. Lived in that neighborhood in the late 70’s. There was a red sauce Italian called Buon Gusto that we went to quite a bit too.

Maybe I should try Schimmel again.

In the 80s, starting in 1983, I hung out with my brother a lot in the East Village. Places we went to a lot included Teresa’s (still exists in Brooklyn Heights, but we miss it here), Odessa (still exists, but as far as I know, has sucked for a long time whereas it used to be good and cheap), Leshko’s (long gone and greatly missed), Benny’s Burritos (gone fairly recently), Sugar Reef (I loved that place! I don’t think it survived till 1990), and occasionally, Frutti di Mare (what passed for a classy date place in the neighborhood then) and Indochine (amazingly, still there on Lafayette St.!)

I love New York Noodletown. But I never had anything remotely palatable from Yonah Shimmel. The last time I tried something there I got a humongous, dry barley knish that I discarded in a neighboring garbage bin after two bites. I don’t remember what I had on earlier visits, but the hope that the food couldn’t be as bad as the previous time was in each case cruelly dashed. I never had the opportunity to try Mrs. Stahl’s knishes.

There were never any potato knishes available any time I looked in.

That’s too bad. They were sure there when I went!!

Jerry’s Knish on the boardwalk

If I ever get out there …

anything remotely palatable from Yonah Shimmel. The last time I tried something there I got a humongous, dry barley knish that I discarded in a neighboring garbage bin after

Same experience here. I used to frequent Yonah Schimmel often as a kid; usually stopping at Guss’ Pickles en route and then a black cherry and potato or kasha knish at Yonah S. I returned for the first time in years last spring and we ordered just about everything on the menu: 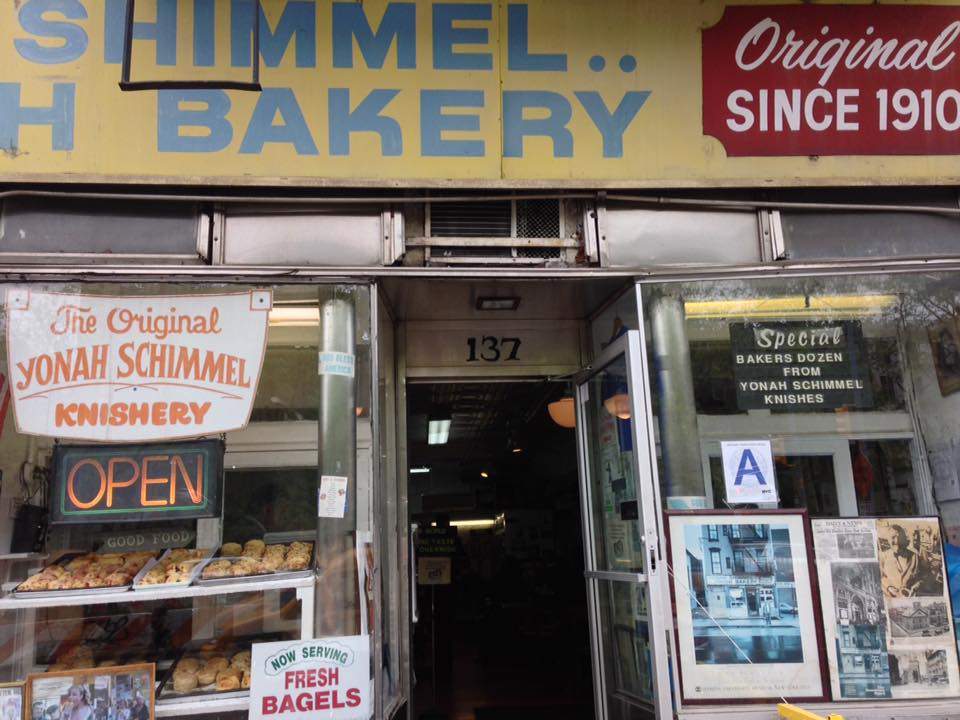 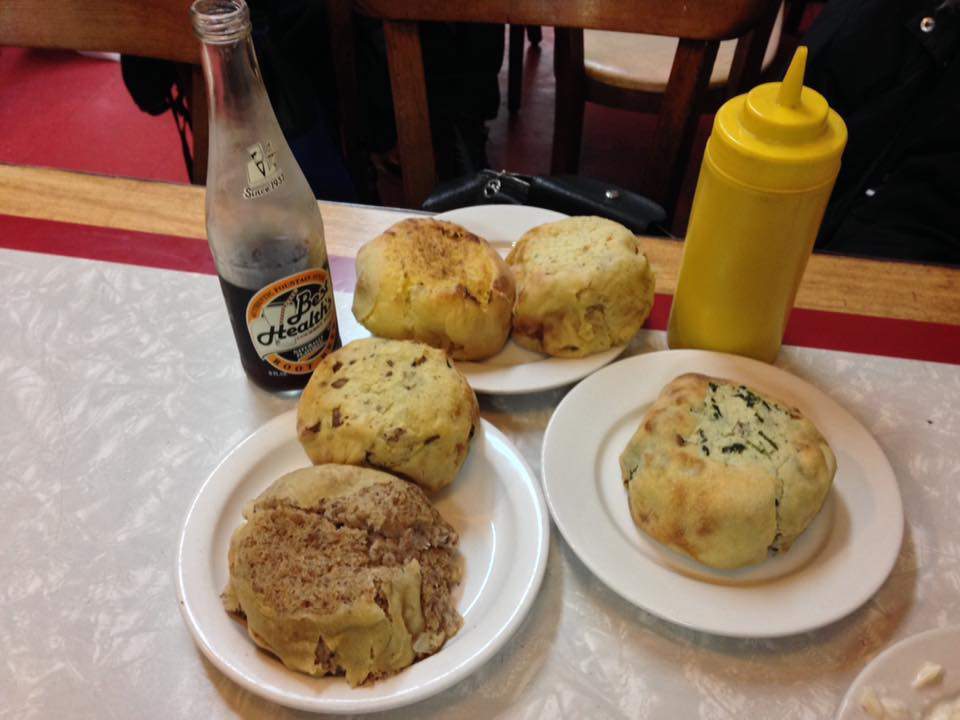 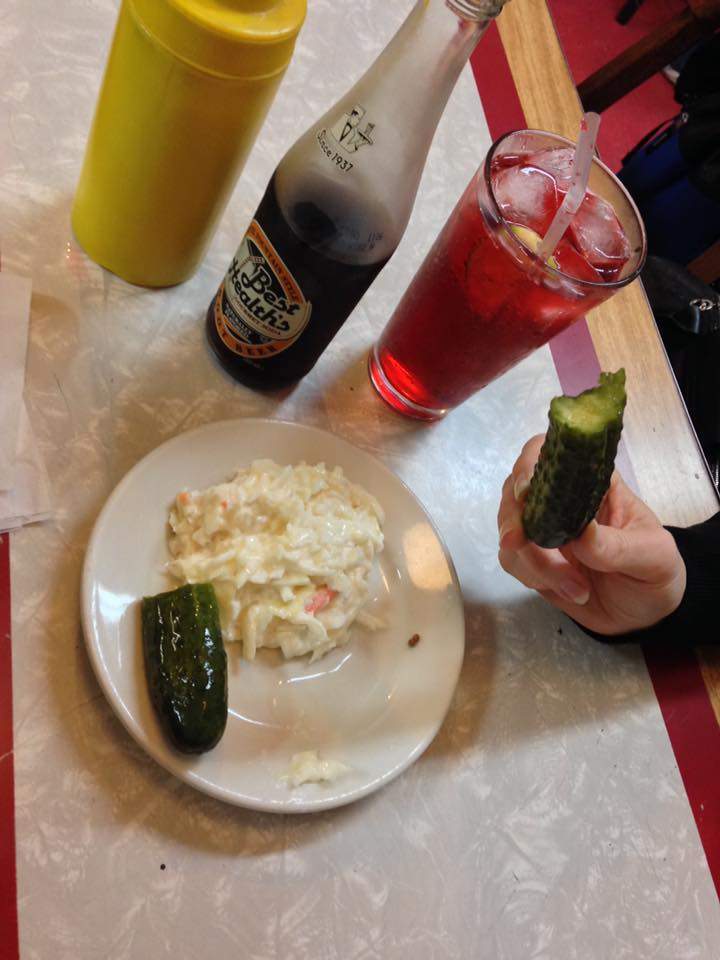 YECH! The coleslaw and pickles were the only edible items! The knishes were some of the worst I’ve ever had, and I love knishes. They were like heavy, dried out, starchy, oversized bricks. I really wanted to love them because I will always have a fondness for Yonah Schimmel’s, but I’m sorry to say, I wouldn’t order a knish from them again. I do admittedly tend to prefer smaller sized knishes with crispier less flaky dough. The sweet potato was probably the best of the bunch (if memory serves) because it just happens to naturally be the most flavorful of all the fillings. It sort of reminded me of the ones my grandmother would reheat for me in her microwave after school- not a good thing! Anyhow, I’d stop in for a plate of half sours and a root beer or egg cream (the cherry phosphate or whatever they call it that I ordered above tasted like gross cough syrup) and I’d try their huge pancake sized latkes which look really good and greasy. I would never bother with their knishes though…

Particularly not when this is just up the street… 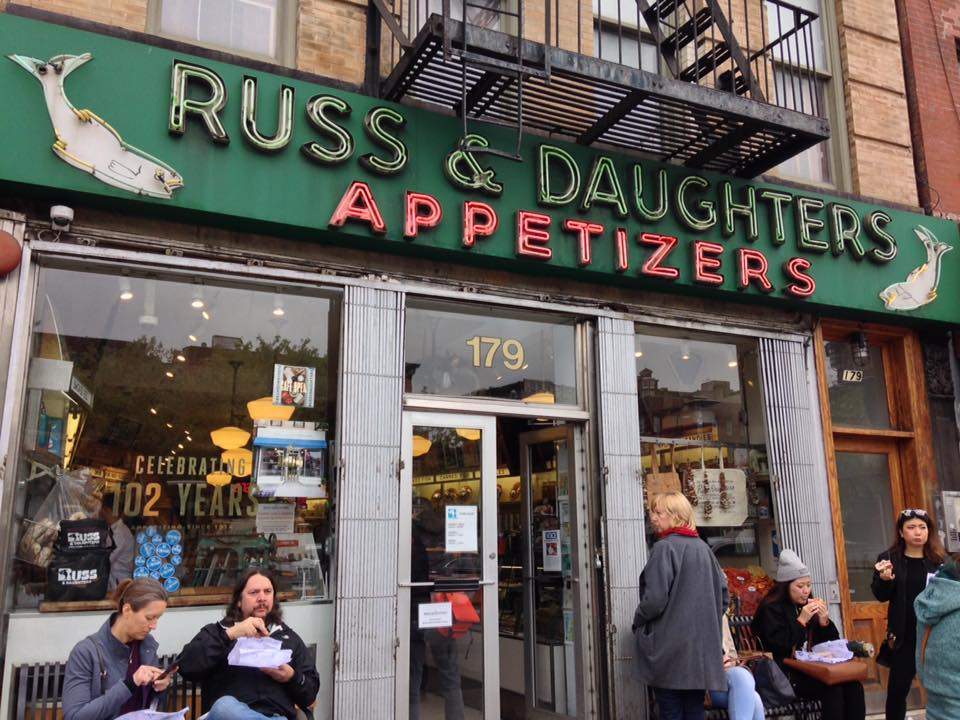 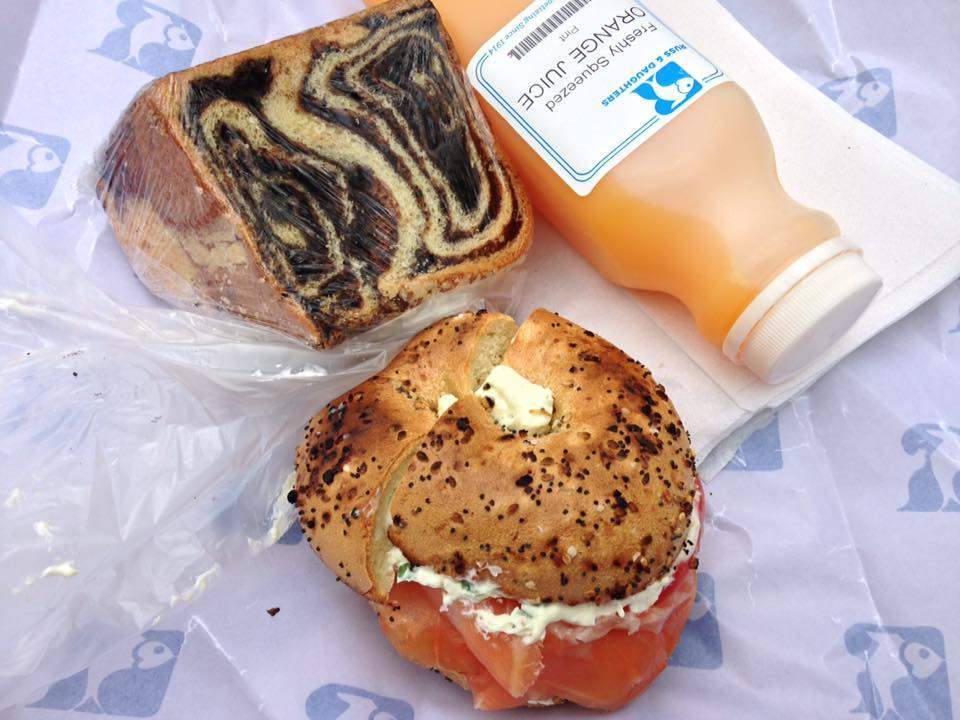 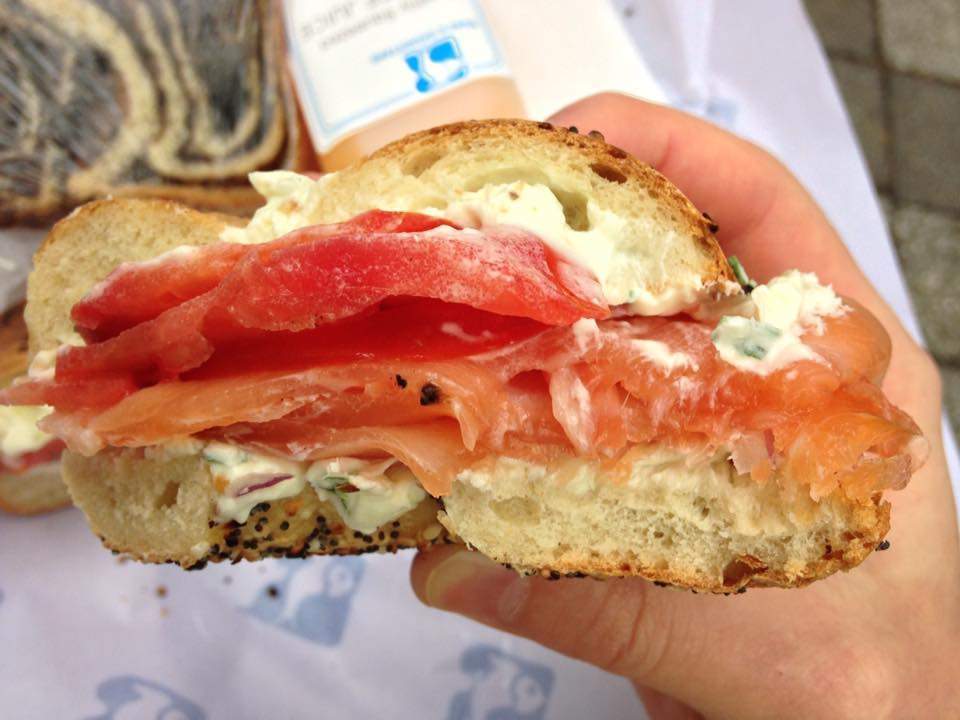 (and of course, Katz’s right before - the holy trinity!)

Btw, I love NY Noodletown and I’ll be having lunch there next week!

3 Likes
next page →
“Food is a pretty good prism through which to view humanity.”
― Jonathan Gold
Market stall in Lima
Credit: TXMX 2