After 16 years near South Park, a few weeks ago we moved our office to Lombard and Mason, so I am excited to try new lunch places.
So far have tried: Italian Homemade (love the pastas, not so much the piadinas); Tuk Tuk Thai – (perfectly serviceable lunch special); Molinari’s (not as good as it used to be when I worked on Montgomery many moons ago); Curry Leaf (good, but they don’t really have any set lunches); Freddies Sandwiches (great - cold cuts aren’t the highest quality but love that they have 3 kinds of sourdough – hot coppa has been my favorite); Petite Deli & Picnic (fine, but a I thought a little pricy for a basic sandwich); North Beach Gyro (solid gyro); Tony’s slice place (Slices are OK but the Calzone is massive and for $8 good if a bit greasy); Codmother Fish-N-Chips – (good, not great).

I’ve been also been digging Graffeo’s light roast beans and Beacon Coffee is a decent hipster coffee place when I don’t have time to make my own.

Any recommendations appreciated – bonus points if I can get out for around $10.

Italian homemade is great and the portions are big. The tortellini costs the same as their other pastas. I like their calzone-like cassoni, which comes with a side of bechamel.

Tanguito has good empanadas. I’ve not tried any of their other argentine food

Maykadeh has solid Persian food, and it is $15 minimum per person. You can always get take out. On a visit two weeks ago, my favorite dishes were the feta cheese with olives, feta cheese spread, and Lamb shank with Baghali polo, which may have been a weekend special. Both their eggplant dishes are fantastic, And the fesenjun, though sweet for my taste, was enjoyed by others I went with. Note that lunch it too early in the day to get tahdig, rice crust from the bottom of the pot.

Some tips I haven’t followed up on yet:
A location of Chennai Kings recently opened at fisherman’s wharf

Mario’s bohemian cigar apparently lets you combine their chicken and eggplant sandwiches, which are served on Liguria Bakery’s focaccia. Speaking of Liguria, you can always stop in there before work and get their pizza focaccia

The Grant location of Henry Hunan has a separate, but translated, Sichuan/Hunan menu In addition to their (mostly) Chinese American dishes available at their other locations. This might be a couple of bucks more than you were hoping for

I agree with a bunch of the previously mentioned spots, as this is also my neighborhood. Sushi on North Beach is a bit more than $10 usually, but they also have some nice lunch specials. Piccolo Forno (same owners as Ideale on Grant) across the street from Italian Homemade is also a solid choice for Italian. I love getting the antipasto plate they prepare for you from some of the hot table items. Pho Vung Tau is also a good choice for Vietnamese food. Darren’s Cafe at the Wharf also has a decent lunch menu and half of it is also Vietnamese dishes, but I prefer Pho Vung Tau. Lai Hong Lounge is pretty good Dim Sum and always very affordable. And you can score a decent burrito at Taqueria Zorro or Panucho’s easily for under $10 too.

Thanks - great tips. The $10 limit isn’t set in stone, but since I’m getting lunch in the neighborhood 5 days a week it would be nice to not spend $20-$25 every day. I’ve been meaning to check out Sushi on North Beach. Liguria Bakery has been closed for vacation since we moved in but I’ll hit it when they re-open.

I like the meatball sandwich and lasagna at Mario’s.
There is a recent thread on Il Pollaio.
Mo’s burgers on Grant
Philly cheesesteak at Buster’s

Naked Lunch: depending on the day’s menu, I usually like the veg/non-meat sandwich the most.

Chubby Noodle: haven’t been there for lunch but I think it’s the same menu as dinner. If you go with someone and split a couple dishes you can stay around $12-$15/person.

Does anyone have experience at Little Szechuan? They have a huge menu but I moved from the area soon after they opened and never got around to trying it.

Is Don Pistos still open for lunch? They used to be (I think only on Fridays or something) but looking online it doesn’t seem to be the case anymore but there’s still a Lunch section on their menu…

+1 Golden Boy Pizza, although look for a pan that hasn’t been out of the oven long. The ones that have been sitting around for awhile can sometimes be underwhelming.

Golden Boy! $8.50 for one slice clam and one slice cheese. Reminds me of the sicilian slices I used to get in NYC, but lighter. Despite an abundance of clams the primary flavor was garlic - I think this is because of the Manila clams used at most places in SF, they lack the brininess of East Coast little necks/chowder clams. Will definitely return.

I forgot to mention that Little Vine is a gourmet shop on Grant Ave. that sells wine and cheese etc… Every day they have a different sandwich that they make throughout the day as they sell them. All very high-end ingredients on Acme bread and creative combinations. They usually have two or three already made when you walk in on the counter for $10-$12 or so and still might be my favorite sandwich in the neighborhood. You can call them to see what the choice is that day.

I had a so-so bowl of dan dan mian and an equally underwhelming order of wontons in chili oil at Little Szechuan when it first opened, but haven’t been back since. I think I am allergic to places that spell Sichuan “Szechuan” in this day and age.

Cafe de Casa, Brazilian pastries, salads, and some other stuff has a location on Leavenworth and Columbus. I haven’t tried that location, but have enjoyed many breakfast items at their South San Francisco location

If you’re going to go for the piadina, stick with the ‘classica’. It’s actually really good, though I’d agree with you on the others. Molinari’s is also dependent on the right sandwich combo.

I’ll strongly second Mario’s and Liguria across the park, if you can get there early.

Charbroiled burgers at Joe’s are excellent. Pro-tip: their hamburger steak is possibly the best I’ve ever had, period. Joe’s Special is a good lunch option as well.

Try the meatballs gigante with wild mushrooms, pancetta and cream sauce at Tony’s next time - along with their bucatini and spicy sausage for the ultimate comfort food. You’ll probably feel like taking a nap afterward!

Capo’s is fine but heavy and best to share family style. I’ve never tried their Italian subs, but I’m sure they’d be great for a quick lunch takeout.

Sotto Mare is also open for lunch. Most everything I’ve ordered off the menu has been excellent - cioppino is their specialty, but I often order a louie and a plate of sand dabs and you can never really go wrong with grilled sole.

Is this the Molinari’s Special; I forget?? 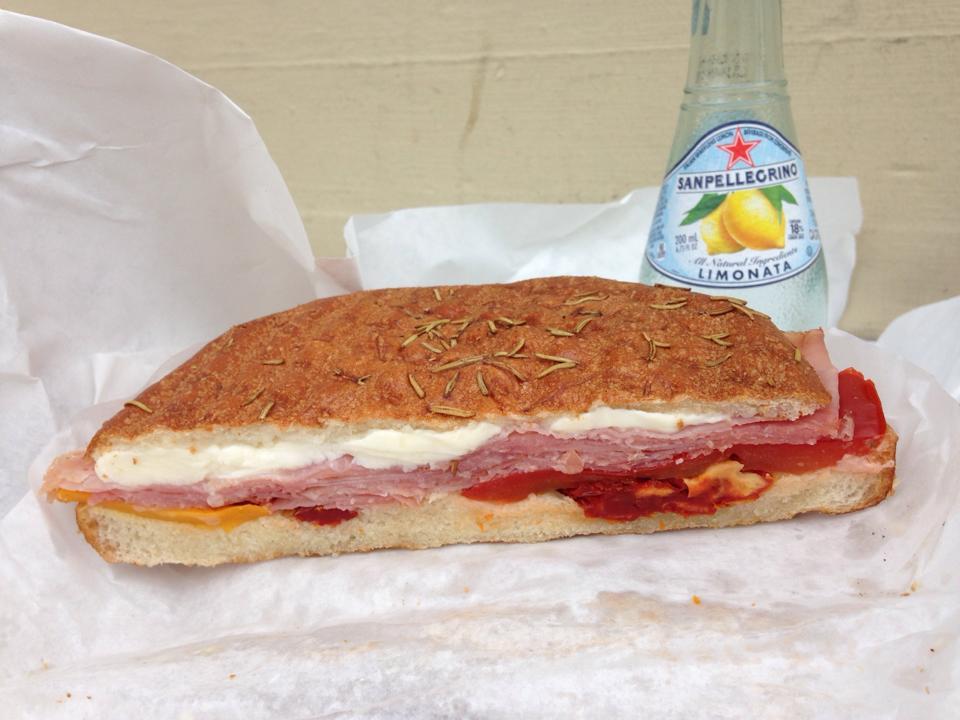 This is the combo to get, if you’re going to grab a sandwich from Molinari. Best chased with a caffe lungo at Mario’s!

Baonecci used to be excellent but is best avoided now… I do still enjoy their pasta e fagioli, admittedly. I’ve read that ownership/management changed sometime in the last year or so.

Bummer. When was the last time people were there? I had something disappointing a year ago, but haven’t been back.

I’d guess it was probably around the same timeline for me too.

I took my parents from out of town and was seriously disappointed. The crust was beyond thin and soggy - almost like a piece of undercooked matzo. Their tomato sauce still had good flavor but the cracker-thin crust was a major deal breaker. It used to be my favorite pie in the city but I haven’t been back after the last disappointing experience. I’d visited approx. 6 months prior to that last time and had a similarly poor takeout experience. I always ask for extra charred crust and I remember getting home 15 mins. after pickup to find the same thing - thin, soggy, unsubstantial pie that completely fell apart as soon as I took it out of the box. I chalked up to take home but after the second time, I’ve written it off completely. I remember posting about it on the old CH board and someone had mentioned that ownership had changed some months earlier and there was turnover in the kitchen. A few others reported similar problems, so I just struck them off my list. Even their house salad and basic charcuterie plate seemed to have taken a steep nosedive - all the recipes seem different from what I remember.

Great Pastrami and swiss with homemade Russian dressing sandwich from Little Vine today, $10. Not huge but impeccable ingredients. Thanks for the tip Jeffro. Nice selection of cheeses and wines but pretty precious ($25 bitters!).

Curry Leaf has a pretty good and quite large biryani for about $15, lots of caramelized onion (not as good as Deccan Spice).

Tried North Beach Sushi twice for take out - nice portions but not great.

Liguria Bakery is back in action so had a nice selection of focaccias one day.

My office mate got take out from Panuchos, a new Yucutan place on Broadway that looked really good and is on my soon to try list.

After Liguria – assuming tomato/green onion is among the packages, stop at Molinari for “toppings” such as anchovies and any or all of the salamis and everyone at the office will be really happy.

brisket44, have you posted about Deccan Spice? I haven’t seen it. We went and enjoyed it a lot (but didn’t have biryani). Maybe we should start a thread…