tried out the new hand pulled noodle joint at the Longwood Galeria tonight. got the number 1, hand pulled noodle with vegetable, and it was pretty good. the noodles were a little soft but still had bite, the broth was full of garlic and had a nice vinegary edge and there was plenty of bok choy, scallions and chili. the dish has some spice but isn’t really overpoweringly fiery.

the guy who does the cooking was cranking out some pretty good looking buns (they have a Shandong pork bun and a Shanxi Bao that comes with either beef or pork) and they have handmade dumplings too. There are a few other Chinese noodle options that look promising as well and may bear further examination.

The atmosphere is horrible as it’s a weird food court and the other options there are McDonalds, some Philly cheese steak joint, Beantown Burrito and the like. Noodles King seems way better than the other options here and while I’d say it’s no destination, if you find yourself stuck at Longwood Medical for any reason I’d say this place is a far better choice than just about anywhere else in that vicinity. 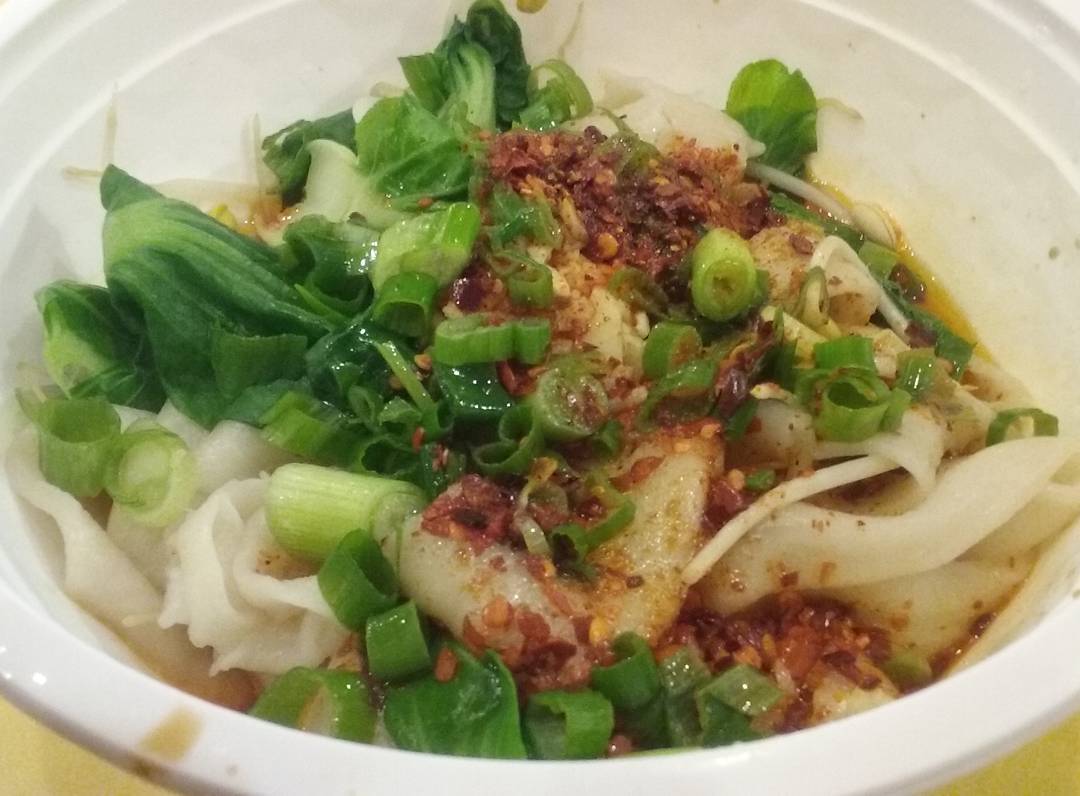 Man, you get around. Isn’t there an Indian fast-food place there too? It used to have the occasionally OK samosa.

If one is in that area, I feel like the omakase (or at least the “nickiri”) at Laughing Monk is pretty much a no brainer.

Anyway, pretty sure Shandong is known for their bread/bun/flour based foods so I’ll be looking forward to trying this place!

“If one is in that area,” depends, does it not, on whether one is walking/MBTAing, or one is driving? Or is there a nearer LM of which I’m unaware (as I am of many things)?

You’re right, I keep forgetting about this place! I need to check that out sometime…

Isn’t there an Indian fast-food place there too?

didn’t notice that one, but it seems likely that there is.

I work at one of the area hospitals, and indeed there is an Indian take out place in the Galleria, though I’ve never been fond of it (tried it twice, gave me severe heartburn both times). I like the Noodles King, but it can take a while to get your food, and when you have a limited amount of time for lunch, that can be a deal breaker. The Noodles King is owned by the same folks who own the Dragon Bowl Chinese next to it, and the sushi place around the corner. The Dragon Bowl is good if you stick to the specials (and they make a decent Ma Po Tofu). I’ll have to try the buns at Noodles King, I’ve only been once, when they first opened, and were only doing noodles at that time.

You’re not misunderstanding. LM is on Huntington Ave, near the Brigham & Women’s hospital. The Noodles King is in the Longwood Galleria, on Brookline ave near the Beth Israel and Dana Farber. I don’t have enough time to walk to LM, order, eat, and walk back.

That makes sense and might explain why they do so much pre-ordered takeout business (there’s also a 5-10% discount if you order online for pickup). But none of the real gems are on the takeout menu, of course!

I guess my recommendation might be more useful under the assumption of a pre-planned evening meal, as OP had mentioned being nearby in the evening.

I’m sorry for the acidity. (Tums?)

I pick the samosa because the other food there does look bad …
… Still, how would you choose between excellent McD and bad IFF (Indian Fast Food)?

Yeah, I didn’t have the samosas. I had Chicken Tikka Masala, and one other dish. I generally don’t get heartburn (and I love hot and spicy food), so that’s why it got the kibosh. Perhaps I should try the samosas!

I do not recommend the samosas – merely tolerate them as I walk to my bus.

(A boy has to eat, and an OK samosa sometimes suffices.)

Wow. It’s too bad I don’t have as much business taking me by the Longwood Medical Area any more. That’s a major step up from the other stuff there!

Had the #1 today. It was as you described it – noodles a little on the soft side, but still OK, and with some kick. My bowl had fewer vegetables (and no scallions) and it required some energetic mixing to get a balance between the spicy topping and the pool of vinegary sauce at the bottom. It’s certainly a good option for that food court, and the other offerings at that counter also look good, as you observe. At $12 it’s twice as expensive as the (tastier, chewier) #4 at Gene’s, although it is a much heftier serving (so may work out to a similar $/lb).

Many thanks to passing-thru for finding this place. It’s very good. Here are some pictures, followed by comments on what I’ve eaten there (and more pictures): 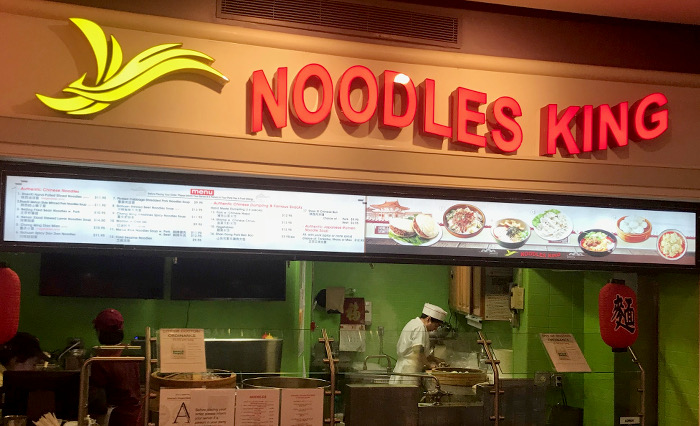 I’ve had the #1 a couple of times, and the #5. While the #5 was also very good – peanutty, with nice spicy, tingly notes, I prefer the wide, flat hand-stretched noodles of the #1. As I’ve said above, the #4 at Gene’s is tastier, but these are very good, too. I’ve also had the pork bao bao – but it was dry on the outside and the filling not very tasty (although it had lots going on: pork, mushrooms, greens, cellophane noodles) – and the Shan Xi bun with pork. This was tastier, but I find this type of bun, filled with soft shredded pork, a bit one-note (even at Gene’s), however aromatic the pork. A personal (dis-)preference.

The wonton in chili oil (#10) were far tastier all around, from the filling to the chili oil to the crunchy vegetal toppings: 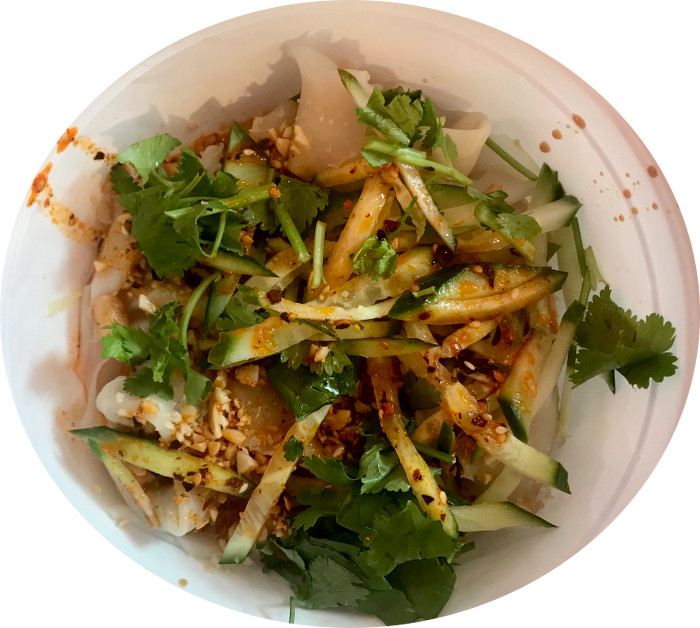 The most interesting thing I’ve had there, though, has been the #9, the intestine soup. It was appropriately funky, the meat was tender and the broth had a deep, rich flavor: 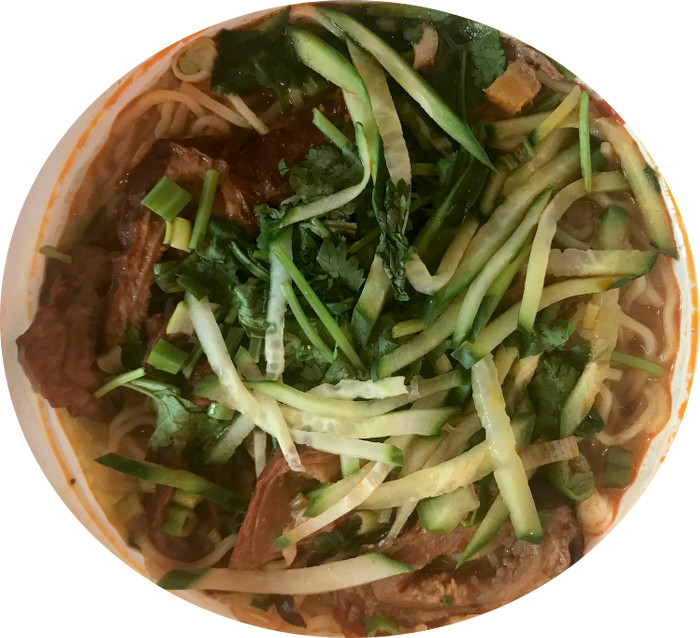 And, if you don’t see intestine in there, I stirred things up, just for you: 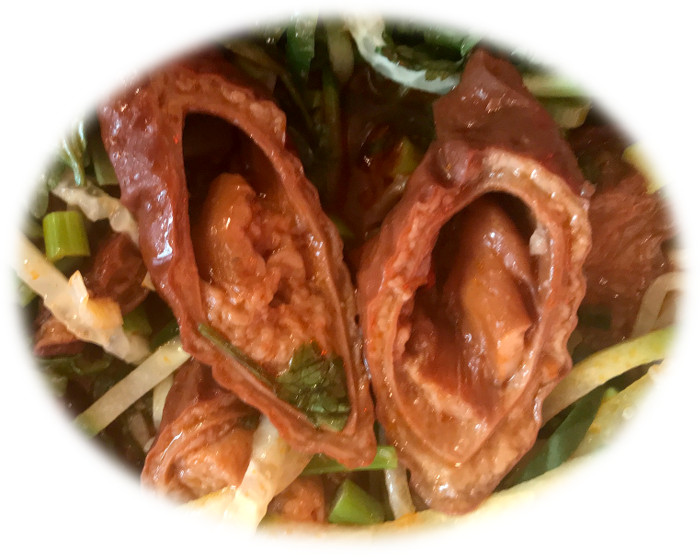 I add, that it would a good idea to patronize this place if you’re in the area. A depressing number of people pass by, stare at the unfamiliar items on the menu, then move to the pedestrian steam table foods at the Chinese stall that’s next over, or to the Philly cheese steak place on the other side. You’d think the Longwood medical area would have enough doctors, residents, students, etc., with adventurous enough palates to make Noodles King an instant hit, but that is sadly not the case. Once when I was there, a Chinese family sat at my table, studied the menu, then settled for chicken teriyaki on rice from the stall on the opposite side of the court.

My issue with them has been the time it takes to get your food. It takes a bit, then it’s super hot when you get it. I get 30 minutes to eat lunch, I can’t wait 10 minutes to get my food, and then get something that’s too hot to eat in just 15 minutes (allowing me 5 minutes to get back to work). I tried the pork bao, but found the bun too thick, and the filling uninspiring.

I agree on all counts. They do take their time to produce the food – not only because they are “cooking from scratch” but also because they move a bit slowly. I hate to compare them repeatedly with Gene’s, but there’s a briskness behind the scenes at Gene’s that they lack. And, yes, their soups are superhot. Their dry noodle dishes are hot, too, but a quick stir makes them cool-enough-to-eat pretty quickly. The bao, is indeed, their least inspired offering – but their wonton dish is pretty good.

I will have to try the noodle dishes that don’t have broth, which seems to be the #1,5, or 3. I actually had the Shan Xi bun with pork, and not the pork bao, as the one I had was very large about 4 inches across. Noodles King is owned by the same folks who own Dragon Bowl, the place next door, which has some nice specials, and make a decent MaPo Tofu. They also own the sushi place around the corner near Dunkins.